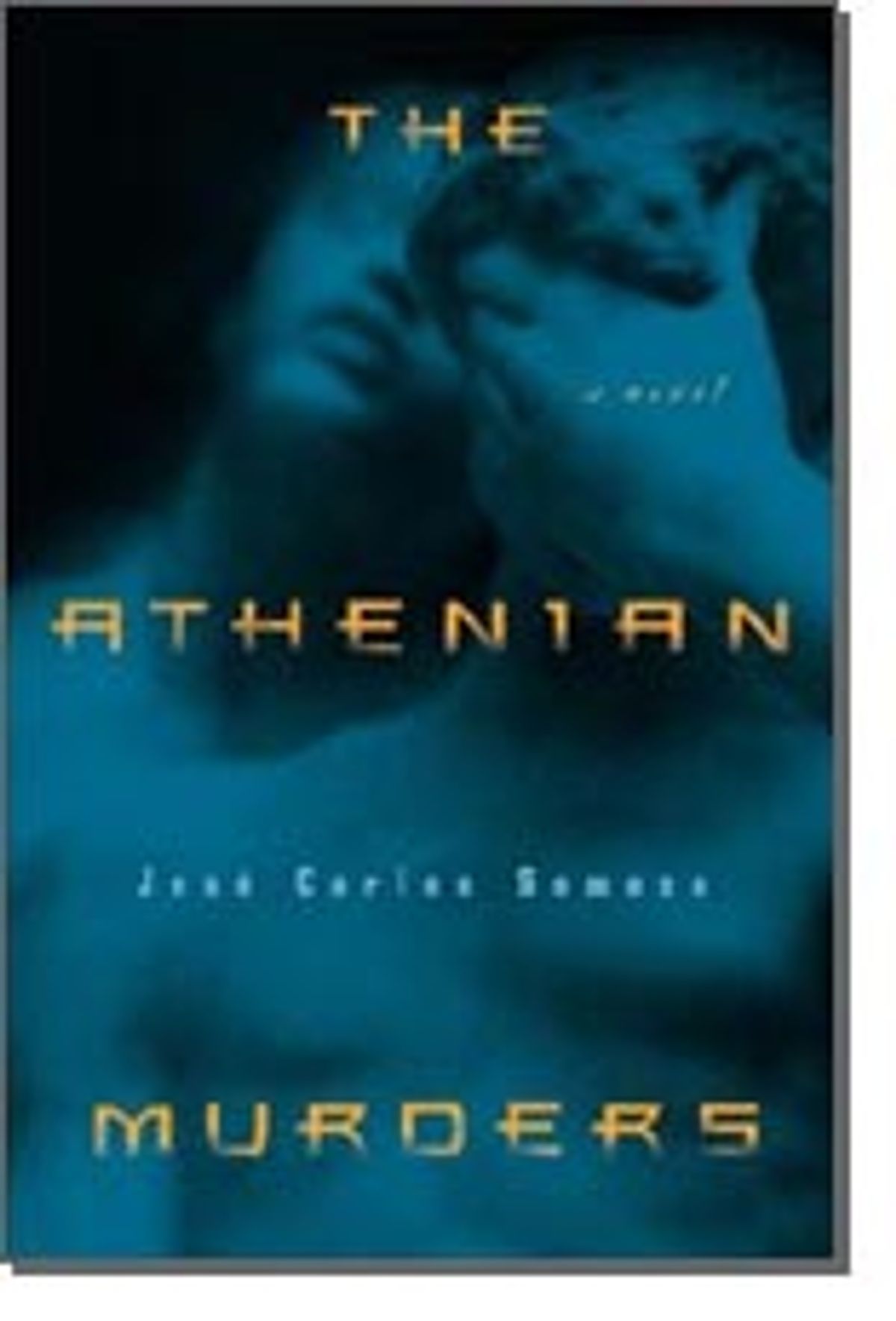 Josi Carlos Somoza's diverting Chinese puzzle of a novel begins inauspiciously. From its title, "The Athenian Murders" (the original Spanish version was called "La caverna de las ideas"), and the first few pages, you might expect it to be one of those routine, cheesy mysteries in which an anachronistic "detective" sleuths around with various historical figures cribbed from some freshman-year survey course. Way back in the '70s, with Nicholas Meyer's "The Seven Percent Solution," this sort of thing seemed fresh, but nowadays everyone from Jane Austen to Leonardo da Vinci and Mark Twain has been dragooned to hunt murderers by one crime fiction hack or another. (Who's next? William Blake? Cardinal Richelieu?)

There's also something odd about the writing in "The Athenian Murders" -- a strange predilection for the word "mane" and an oddly stiff tone ... but wait, here's a footnote signed "TRANS." commenting on the frequent metaphors involving manes and hair and referring to someone named Montalo who supposedly copied this text from a papyrus. (We'll just set aside our knowledge that the novel didn't exist in ancient Greece.) A little further on and "TRANS." is including a description of a conversation with a colleague named Helena; obviously the person writing these notes isn't Sonia Soto, who translated Somoza's book from the Spanish.

In fact, "The Athenian Murders" owes more to Nabokov's "Pale Fire" than it does to "A Connecticut Yankee in Criminal Court." The never-named translator, speaking only through footnotes, quickly becomes obsessed with his project, recognizing that it's an example of eidesis, "a literary technique invented by the ancient Greeks to transmit secret messages or keys in their works. It consists of repeating, in any text, metaphors or words that, when identified by a perceptive reader, make up an idea or image that's independent of the original text." The manes and hair references clotting up the first part of the first chapter give way to repeated images of maws and roaring, which Helena helpfully points out suggest a lion.

The detective in the central story is named Heracles Pontor (a nod to Agatha Christie's famous sleuth Hercule Poirot there), and when the predominant images in the second chapter concern snakes and multiple heads, it's not hard for anyone who remembers her basic Greek mythology to figure out that the Labors of Hercules is the motif at work. But "The Athenian Murders" has more -- and far more ingenious -- tricks up its sleeves. Heracles (whose professional title is "Decipherer of Enigmas") teams up with one Diagoras, a tutor at the Academy -- yes, that Academy -- to figure out how one of its students wound up lying dead on the outskirts of Athens, apparently mauled by wolves.

Along the top of the pages, the two men make their expected tour through significant institutions of classical Greek society -- the brothels at the port of Piraeus, the agora, various temples, the gymnasium and eventually to the Academy itself, where Plato makes the obligatory cameo -- in search of clues. They debate the relative value of Heracles' rigorously empirical reason vs. the idealistic Platonic philosophy espoused by Diagoras. At the bottom of the pages, the translator eagerly notes eidetic images and contemplates contacting the venerable Montalo, an elderly scholar, to request a look at the original papyrus.

Then, however, things get a bit weirder. The eidetic images become extravagantly literal -- snakes writhe all over the floor of Heracles' quarters; a rampaging giant bull trashes the gymnasium; carnivorous horses frolic gruesomely on the Academy grounds -- and yet the characters remain oblivious to all of it. Meanwhile, in the footnotes, the translator learns that Montalo's body has been found in a forest, apparently mauled by wolves.

If that isn't trippy enough, an old buddy of Heracles' shows up after years of travel and starts telling the Greeks about an obscure belief widely held "in many places far from Athens" that "everything we do and say is words written in another language on a huge papyrus scroll. And Someone is reading the scroll right now, deciphering our thoughts and actions, and finding hidden keys to the text of our lives." The text makes some unsettling lapses into the second person, and the translator thinks he sees a menacing figure lurking outside his house in the night.

If you're going to write a novel where cleverness is the chief point, then it must be very clever indeed. Part of the charm of "The Athenian Murders" is that just when it seems about to disappoint on this count, when Somoza appears to have painted himself into a narrative corner, the book ratchets up another level and presents the reader with a new set of enigmas. The philosophical discussions of Diagoras and Heracles turn out to be much more than historical color; they're intimately engaged by the book as a whole. And yes, there is a more deeply buried pattern of eidetic images that will point the vigilant reader toward the truth about who's killing the beautiful young boys of Athens long before the fictional detectives figure it out. Naturally, just as such a reader would be feeling particularly smug, that's when "The Athenian Murders" delivers its final, most surprising twist.

Our next pick: A lovesick fellow takes the form of such animals as a snail, a scorpion, a chameleon and a fish in pursuit of an elusive beauty.