This small movie about a Napoleon impostor may be a trifle, but it's an exceptionally civilized, charming trifle. 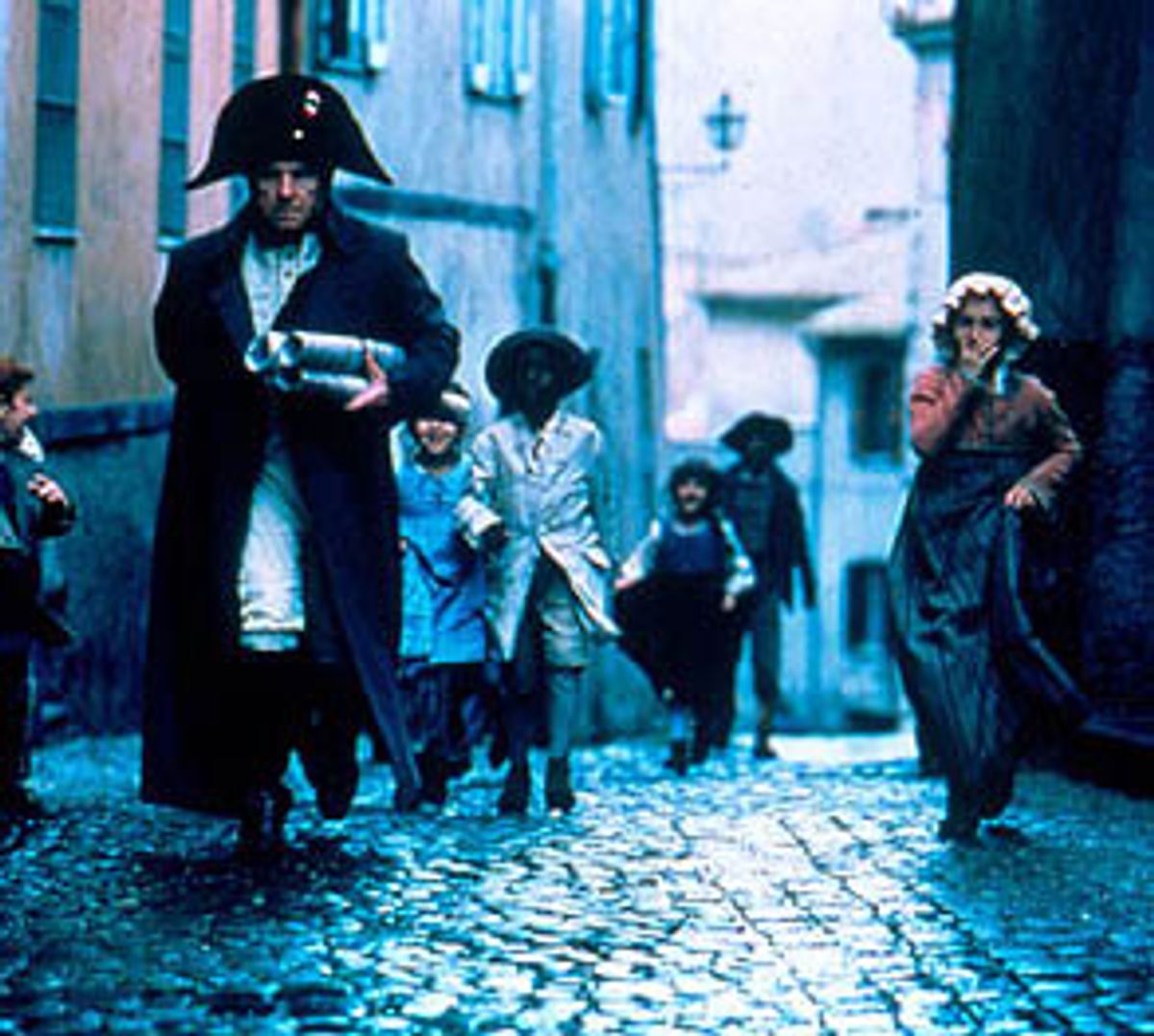 Whether he's a supporting player or the star, Ian Holm almost always seems to be sneaking into a movie from the sidelines. He's an essentially sly actor who gives off a sense that he's warily monitoring his reactions, stealing glances at the other people in the scene when they're not looking his way. Holm is one of the greatest living English actors and yet you can't imagine him playing a role on a grand romantic or heroic scale. Iago, but not Othello. Friar Laurence but not Romeo. Claudius but not Hamlet. With a little dirty exuberance, he might make a great Volpone.

In his best screen work, he's a great portraitist in miniature. He puts understatement and spareness to use in his compact, precise characterizations and, miraculously, he achieves an emotional richness. Think of him toddling through "The Lord of the Rings: The Fellowship of the Ring" as Bilbo Baggins, an impish prankster tickled with the secret he possesses, determined to keep it to himself yet alerting you that something is up by his obvious glee.

As Napoleon in "The Emperor's New Clothes" Holm doesn't inspire the kind of love he did as Fluellen in Kenneth Branagh's film of "Henry V" or as Lewis Carroll in Gavin Millar's film of Dennis Potter's "Dreamchild." Holm delights in the disparity between the emperor's physical stature and the commanding authority he projects. Even in his second exile on the isle of St. Helena, even at his most exposed, reclining during his daily bath, his retinue hanging on every utterance, Napoleon is the center of attention. Every time one of his English keepers tries to get shirty, Napoleon's steady, withering gaze and a carefully chosen cutting remark remind them of whom they're dealing with. It's a joke when one of Napoleon's loyalists, a tall, fine figure of an officer, nearly smothers the emperor in an embrace, and yet you never doubt that this diminutive man could inspire unwavering loyalty, or persuade people to have faith in his conqueror's dreams.

"The Emperor's New Clothes" is a trifle but an exceptionally civilized, charming trifle. It's a historical "What if?" taking off from the idea that in 1821, on St. Helena, Napoleon's followers found the emperor's exact double, a common ship hand, and engineered a switcheroo. The plan is for the double to announce that he's an impostor after Napoleon has taken the deckhand's place, worked his way to Paris, announced his return and, with the aid of his followers, taken his rightful place as ruler of France. The director, Alan Taylor, and the screenwriter Kevin Molony, who has brilliantly adapted Simon Leys' 1986 novella "The Death of Napoleon," aren't interested in an epic like the one that Abel Gance labored on for years, or that obsessed Stanley Kubrick (after "2001," he announced his next project would be the life of Napoleon).

Their film is deliberately on a small scale. It opens with a young boy using an early projection system to view a series of colored slides illustrating the emperor's life. We watch as one of the slides, Napoleon standing on the shores of St. Helena looking out to sea, comes to life. It's a fine, witty metaphor for what is essentially a fable. The movie might almost be a fairy tale for lovers of historical fiction. It's a small movie enriched with talent and taste, streaked with bits of magic that you keep coming on like raspberries baked into a cake, morsels that give you sudden bursts of tart and sweet flavor.

The movie's shaggy-dog joke is that, from the moment Napoleon boards that ship, everything goes wrong. He winds up in Brussels and has to make his way to Paris with slim resources. There, he finds that the contact he was meant to make has recently died. Napoleon lodges with the man's young widow, Pumpkin (Iben Hjejle in a warm, unaffected performance), a fruit vendor barely making ends meet since her husband's death. And there's worse. Back on St. Helena, the impostor (also played by Holm) refuses to announce himself because he's too busy enjoying his impersonation. Lying in the bath in Napoleon's familiar hat, swigging the emperor's brandy, he's a vulgarization of the imperiousness we've seen. But Napoleon's men are stuck with him. Without acknowledging he's a fraud, they've no choice but to wait hand and foot on this little man.

"The Emperor's New Clothes" is about how these snafus come to suit Napoleon just fine. Fearing that Pumpkin's ruin will mean his own, Napoleon uses his military genius to organizes her band of melon sellers in a military campaign that will have all of heat-stricken Paris clamoring for their cool wares. (There's an especially witty cut from a prim, crinolined girl demurely eating a slice of watermelon in a picturesque park to dogs in the street lapping up the discarded rinds.) It works and, now sharing Pumpkin's bed, Napoleon begins to settle into middle-class comfort.

The only trouble comes when he insists that he's Napoleon. What keeps the movie from being too cozy, an ode to being ordinary, is the joke of the wearying impossibility of being Napoleon. Of course, people don't believe him when he claims to be the returned emperor. Who can accept a myth as flesh and blood standing before them? They're happier thinking of him as a grand figure. And, after a few months, so is he.

Alan Taylor appears to be one of those directors who isn't interested in repeating himself. And that may turn out to be a problem for him since the talents of unclassifiable directors are often undervalued, as John Huston was for years, and as John Boorman still is. This is only Taylor's second film. His first, the little-seen 1995 indie heist movie "Palookaville," was an offhand respite from the Tarantino wannabes who had taken over American indies at that point. Since then he's done a lot of work for HBO, directing episodes of "Sex and the City," "The Sopranos" and "Six Feet Under."

If there's a fault to "The Emperor's New Clothes" it's the pacing. For a long stretch, from the time of Napoleon's arrival in Paris to just before the climax, the movie continues at the same level rather than building. Though that doesn't hinder the emotional or narrative satisfaction of seeing a perfectly scaled tall tale brought to conclusion. Taylor's sensibility here is that of a droll, erudite entertainer. He's confident enough in his sophistication that he has no need to show off -- and his faith that the audience can share this level of literate, civilized amusement is very flattering. The people around me in the theater reacted with the audible pleasure of settling in to listen to a particularly amusing dinner guest -- one who wisely doesn't wear out his welcome.

Taylor is also a solid director of actors. Of the fine supporting cast, I was most happy to see Murray Melvin -- with his long, sweet face, the face of an aging pixie -- as the emperor's popinjay secretary, taking down his memoirs faithfully. Melvin is probably best known as the young gay boy who befriends the pregnant Rita Tushingham in Tony Richardson's 1961 film of Shelagh Delaney's play "A Taste of Honey." Seeing him again after so long feels like a sweet gift particular to the movies.

Kevin Molony's screenplay is in every way an improvement on Simon Leys' novel. It's a good book, but Leys (the nom de plume of the Belgian art historian Pierre Ryckmans) is too busy delineating his parable of thwarted power to make the characters come alive. They remain puppets dancing at his command and as such, the novel can't escape a superior note of comeuppance in its treatment of Napoleon. Molony's adaptation is funnier, warmer, fuller, more imaginative. Leys provided the idea, Molony has taken it to fruition. It's a terrific example of the life a movie adaptation can achieve separate from its source.

And Holm is inspired throughout. He evokes a pitiable, but never belittling, sympathy for Napoleon's frustration. He's wonderful in the scenes when he finds that the battlefield at Waterloo has been turned into a tourist attraction, and touchingly bewildered when he sinks down into an inn bed that proclaims "Napoleon Slept Here" with "I was never here." Holm's best moment is when he steals onto the grounds of an asylum at twilight and finds himself confronted by madmen who all think themselves Napoleon. The terror on Holm's face at the moment makes him suddenly, tremblingly human, and it seals the movie's stroke of turning Napoleon's compromise -- the decision to live as an ordinary man -- into his greatest triumph.

Among the most visually lovely moments in what's the most beautiful-looking movie yet this year (it was shot by Alessio Gelsini Torresi) is a sunrise seen from the deck of the ship Napoleon escapes on. Snoozing in his hammock, he's awoken by his only friend among the sailors, a black cook, who wants to share the glorious sight with him. It's all the empire anyone could ask. No conquering necessary.