Radio-station owners are shocked -- shocked!-- as the music industry's payola scandal widens. Record-label execs aren't buying it (and neither should you). 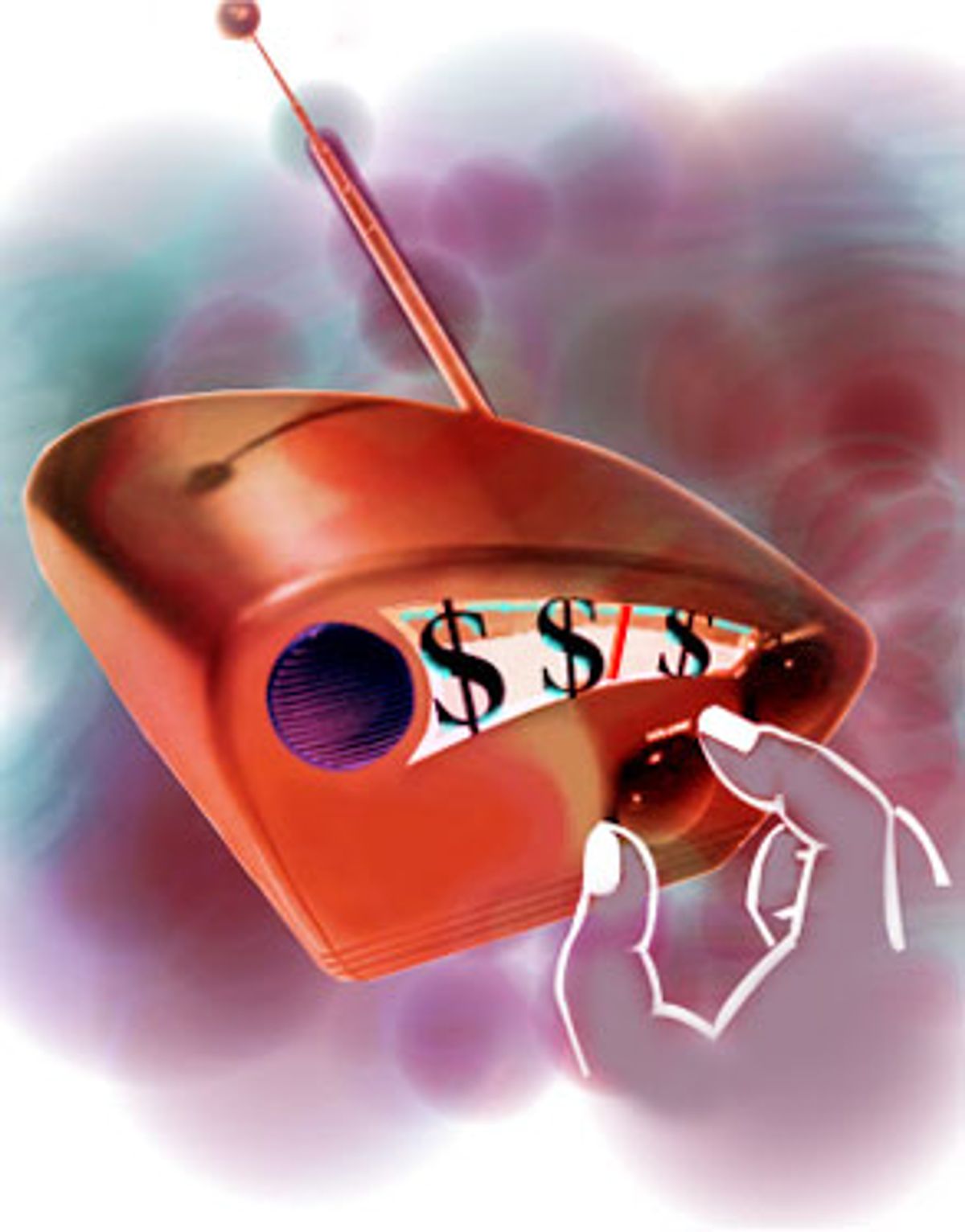 Is pay-for-play here to stay?

Once a hush-hush topic rarely discussed even within the music industry, "pay-for-play," the costly system by which record companies pay independent promoters to get songs on the radio, has now become a hot-button political issue.

Some members of Congress are talking about holding hearings and offering legislation in hopes of tearing down the entrenched pay-for-play system. Not only does pay-for-play cost the music industry approximately $150 million each year, it virtually shuts off access to commercial FM radio for artists or record companies who can't or won't spend hundreds of thousands of dollars to promote a new single. Inside the industry, the veil has also been lifted; an entire panel discussion devoted to indie promotion is being put together for the radio industry's largest annual convention this fall. Meanwhile, ABC's "20/20" ran a prime-time segment on pay-for-play, and even the New York Times and the Wall Street Journal have introduced the topic to their readers.

"It's become part of pop culture," says the head of radio promotion at a major label. "People are intrigued by it and they want to read about it."

It seems that most outsiders don't like what they see.

"It's an outrageous thing and it's a sad thing," says Sen. Russ Feingold, D-Wis., who is preparing to introduce legislation that would, among other things, close loopholes in the Federal Communications Commission's outdated payola laws. "It really does affect the quality of what you hear on the radio. It's very disturbing for me, and not just for entertainment but even for democracy."

According to a poll recently conducted by the Future of Music Coalition, a Washington think tank, 68 percent of radio listeners want the government to consider laws ensuring that all musical artists have a "more reasonable chance" of getting their songs heard.

Inside the music industry, accusations over who is to blame for the broadening scandal have become fierce. As Salon reported in March, the Recording Industry Association of America (RIAA), acting on behalf of the major record labels tired of paying escalating fees to "indie" promoters, was preparing to ask the FCC to revamp its payola laws. It now seems Feingold's pending legislation will attempt to do just that.

But can the pay-for-play machinery be fixed or dismantled? Can it at least be taken down a notch, from a $150 million industry black hole to, say, a $75 million one?

Feeling the heat, radio operators, led by the nation's largest, Clear Channel Communications -- which owns approximately 1,225 stations -- insist that record companies created the dubious indie system and must fix it. Borrowing a page from the Nancy Reagan handbook, radio's advice to the labels seems to be "Just say no."

Appearing at a media conference held by Deutsche Bank, Clear Channel chairman and CEO Lowry Mays told investors that payola was "an aberration of the record companies" and had been "a problem within the radio industry for many years."

The problem with that simplistic analysis -- and the reason radio is not entirely blameless -- can be summed up in a single phrase familiar to all industry insiders: nontraditional revenue, or NTR. Led by Clear Channel, radio corporations have been scrambling to find new ways for their radio stations to generate revenue. And the hefty pay-for-play arrangements with indie producers have been among the most reliable and lucrative streams of NTR.

For Clear Channel, which has been perhaps the most aggressive of the radio networks in pumping up indie prices, pay-for-play has meant tens of millions of dollars each year to the corporate bottom line.

"Clear Channel would have a fucking heart attack if labels stopped paying indies," says one record company promotion executive. "Clear Channel looks at pay-for-play as an alternative source of income." In fact, until recently the upfront money indies paid out went to local stations to help defray promotional costs. Today, in the case of Clear Channel, those indie payments go directly to corporate headquarters, not the individual stations. Would Clear Channel simply go along if the labels decided to cut off those multimillion-dollar payments?

Clear Channel executives declined to be interviewed for this story.

If anything, says the label source, Clear Channel was instrumental in driving up the cost of radio promotion last year, when the company used its clout to sign exclusive deals with eight nationwide indies.

All Clear Channel station managers, says the source, were told not to renew any indie contracts. "Once all the contracts were up, the major indies had to bid for the stations," the source continues. "They offered multimillion-dollar contracts, which had to be paid upfront to Clear Channel. Then in order to make a profit for themselves, the indies had to turn around and charge the labels extraordinary fees for playlist adds."

The way pay-for-play works today is that independent promoters pay radio stations for the exclusive right to "represent" those stations, to act as a kind of middleman between the radio station and the record company. Generally, the indies pay between $100,000 and $400,000 per station, depending on the size of the market. Once that deal is signed, the indie sends out weekly invoices to record companies for every song added to that station's playlist. This is not technically considered payola under current laws, by the way, because indies don't pay station employees money to play a specific song.

Those invoices add up. Every song added to an FM radio playlist comes with a price: Roughly $800 per song in middle-size markets and $1,000 and more in larger markets, up to about $5,000 per song for the biggest stations in the biggest markets. Most stations add between 150 and 200 songs to their playlists every year.

It costs a record company about $250,000 just to launch a single on rock radio today. That doesn't guarantee success; it just gives the single access to the airwaves. If the song catches on and eventually crosses over to the mainstream Top-40 format, indie costs balloon to more than $1 million per song.

Critics complain that indies used to develop relationships with programmers and aggressively pitch new songs but that there's much less of that today and too much toll collecting. (That is, an indie gets paid regardless of what songs a particular station plays, as long as that indie has an exclusive contract with the station.)

There's little doubt that promotion costs have recently gone up. One veteran indie says he lost exclusivity to one medium- and one small-market station during last year's Clear Channel bidding process, after a rival promoter made an overly generous offer of $500,000.

"I know what those stations bill, and the only way to make a profit is to hold the labels hostage," says the indie.

According to this source, the math for the deal doesn't add up. He says he used to charge labels $800 for each playlist add at the two stations. Even if the new indie nearly doubles that rate to $1,500 per song, the two stations combined usually add only six new songs a week, which would result in $450,000 a year in invoices, or $50,000 less than what the new indie has agreed to pay the stations for exclusivity.

Of course, one way to generate more revenue is to persuade the stations to add more songs to their playlist. Record company officials say that's now common practice, especially for the pre-dawn hours, when stations will play new songs so that hard-pressed indies can collect money from the labels. But few listeners actually hear the songs played at 3 or 4 o'clock in the morning, so the airplay doesn't do the artist's career any good.

"Independent promotion is money that disappears from a band's pocket, that is charged to the band, and no one knows where it goes or what it actually does," complains Dirk Lance, bass player for the rock band Incubus, quoted in a recent Loyola Law School law review article examining payola. "It's gambling. Ultimately, it's gambling with my money. It's payola, but with unclear results. It's a smoke-and-mirrors game."

That's why labels are increasingly uncomfortable with the system. Yes, they created the monster, but they used to be able to control it to some degree. Now radio giants, like Clear Channel, thanks to their sheer size and leverage, are calling the shots. Suddenly caught in the middle of a severe economic downturn (music sales are down sharply for the first time in two decades), record company executives insist they can no longer afford to pay out millions of dollars to indie middlemen who may or may not create hit records. (Labels do try to recoup some of the indie costs from artists' earnings, but if an artist flops commercially there's no money to recoup.)

This isn't the first time labels have tried to clamp down on indies. In 1981, upset about the influence amassed by a group of powerful indies known as the Network, Warner Bros. and Columbia (in its pre-Sony days) launched a boycott against it. Then, as now, powerful indies were getting $3,000 or $4,000 for each song added to playlists. According to Fredric Dannen's 1990 book "Hit Men," a now legendary industry exposé, the boycott quickly collapsed when the labels' marquee artists, such as the Who, revolted after having trouble getting their songs on the radio.

Four years later, the labels suggested that the RIAA launch an investigation into indies. If the investigation uncovered any illegal activity, the reasoning went, the labels would have a reason to cut their ties to the indies and save millions of dollars.

That investigation was shelved, but the labels got the out they needed the next year when NBC journalist Brian Ross, aided by key record-company sources, aired a sensational report connecting heavyweight indies with organized crime. Soon, major labels announced they were no longer using indies, and a federal grand jury, under the supervision of Rudy Giuliani, then a U.S. attorney in New York, began investigating indie promotion.

Over time, however, the practice reemerged, with the humbled indies charging just $700 an add for a major-market station instead of $3,000. That's where the base rate stayed well into the '90s. Then rampant ownership consolidation swept through radio following the passage of the 1996 Telecommunications Act. As fewer and fewer corporate owners took control of more and more stations, promotion costs began to rise. Today, they're just about where they were during the peak period chronicled in "Hit Men."

Adding to the labels' frustration is that the antitrust law forbids them from agreeing, as an industry, either to dump the indies or slash the fees they pay them. Even if some sort of accord could be reached, the music industry remains a culture of short-term goals and inherent insecurity about where the next hit is coming from.

"Even if you got together [Sony Music CEO] Tommy Mattola and [RCA Music CEO] Bob Jamieson and the heads of all the major labels and said, 'OK, guys, don't pay for adds at stations,' and everybody agreed," says one record company executive, pay-for-play still wouldn't die. "The second a priority record came out and stalled at radio, the pocketbooks would open right up."

That's exactly what indies and station owners are banking on.