Does the perfect one get off using her glue gun or does she have a sex life? I think we all want to know. 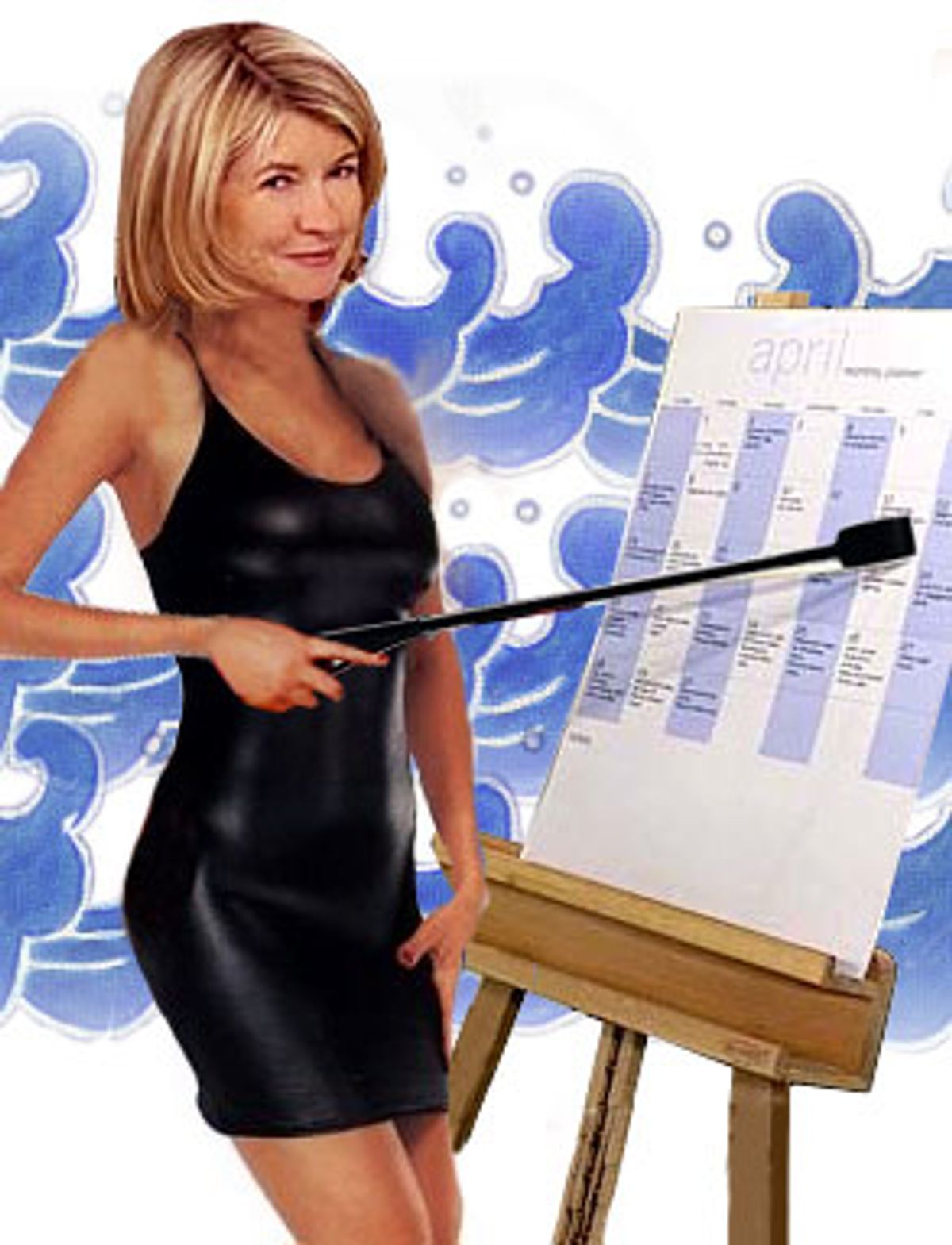 I think it's because of four main ingredients. First, she loves the word "perfect," and anyone who is so into perfection is a tough nut to crack in the sack. It makes me wonder what kind of a man would be able to please her.

Second, she gets really, really excited when she uses her blowtorch or her glue gun, which says to me that lurking beneath that Connecticut blond meringue of a mama is a hint of S/M. But she hates messes, so she would probably not want any bodily fluids spattering on her eggshell-white walls. I could see her in black leather, though.

Third, she acts like a classic fag hag -- she has gay men on her show all the time who teach us how to groom our pets and make the perfect flower arrangements without baby's breath. She coos with them in a way that suggests hidden feather boas in her immaculate closet.

The fourth reason I'm obsessed with Martha's sex life is that she won't talk about it. When Larry King asked her about her love life last February during a Valentine's Day interview she sidestepped him curtly. There are some facts and some hints: She was married to the father of her grown daughter, so she is capable of having sex. She told Conan O'Brien, when he visited her show, that she would have come to his wedding in Seattle if she had been invited because she has a boyfriend there. And there are rumors that she and her now-infamous investment pal, Sam Waksal, were once a romantic item (and since he once dated her daughter, that is highly icky).

You can see that I care too much about this. But I think it stems from the fact that I lie in bed each morning, as I sip coffee, and watch Martha puttering around her house on her show. I'm beginning to relate to her, even though we are opposites in most every way. I have shame drawers that haven't been neat for decades, and I'm sure that would never happen in her house. I don't love the color celadon and she can't live without it. And I will never, ever be able to make an apron. The one thing we have in common is love of food, and I do believe that people who love to eat usually love sex, too. She's always sticking her fingers into sauces and frostings. She loves eating big bites of things on-screen and exclaiming how delicious it all is. She swoons nicely.

Anyone who loves the sensual things she does must love romantic passion too. I wonder if she thinks about rolling around on her 300-count sheets while she's ironing them? I wonder if, when she's whipping her cream by hand, she imagines spreading it on some man's thighs and licking it off? I wonder if she has ever gone skinny-dipping in her pool with some hot hunk of a gardener she's hired to trim her hedges -- if you know what I mean.

Martha is just a tease. In her magazine she shares her daily activities via a calendar that lists all of her appointments --weddings, prunings, lunches. She knows we're into voyeurism but she won't satisfy us. She won't list her dates, her trysts, her flirtations on the calendar. Instead, she lures us with notes on pressing flowers, juicing lemons, gathering eggs and chopping big pieces of hard wood.

I can't stand it. I'm begging you, Martha. Write a sex book. Believe me, there are people out there who are yearning for your expertise in not only sugar cookie making but sweet-talking and spooning. You've taught us how to make hot chocolate; now teach us how to make hot, hot love. You know you know everything. Share, sweetie, share. And I'll be your editor -- if you promise not to hurt me.