While civil libertarians are furious over the Supreme Court's voucher decision, many low-income African-Americans are solidly in the conservative camp. 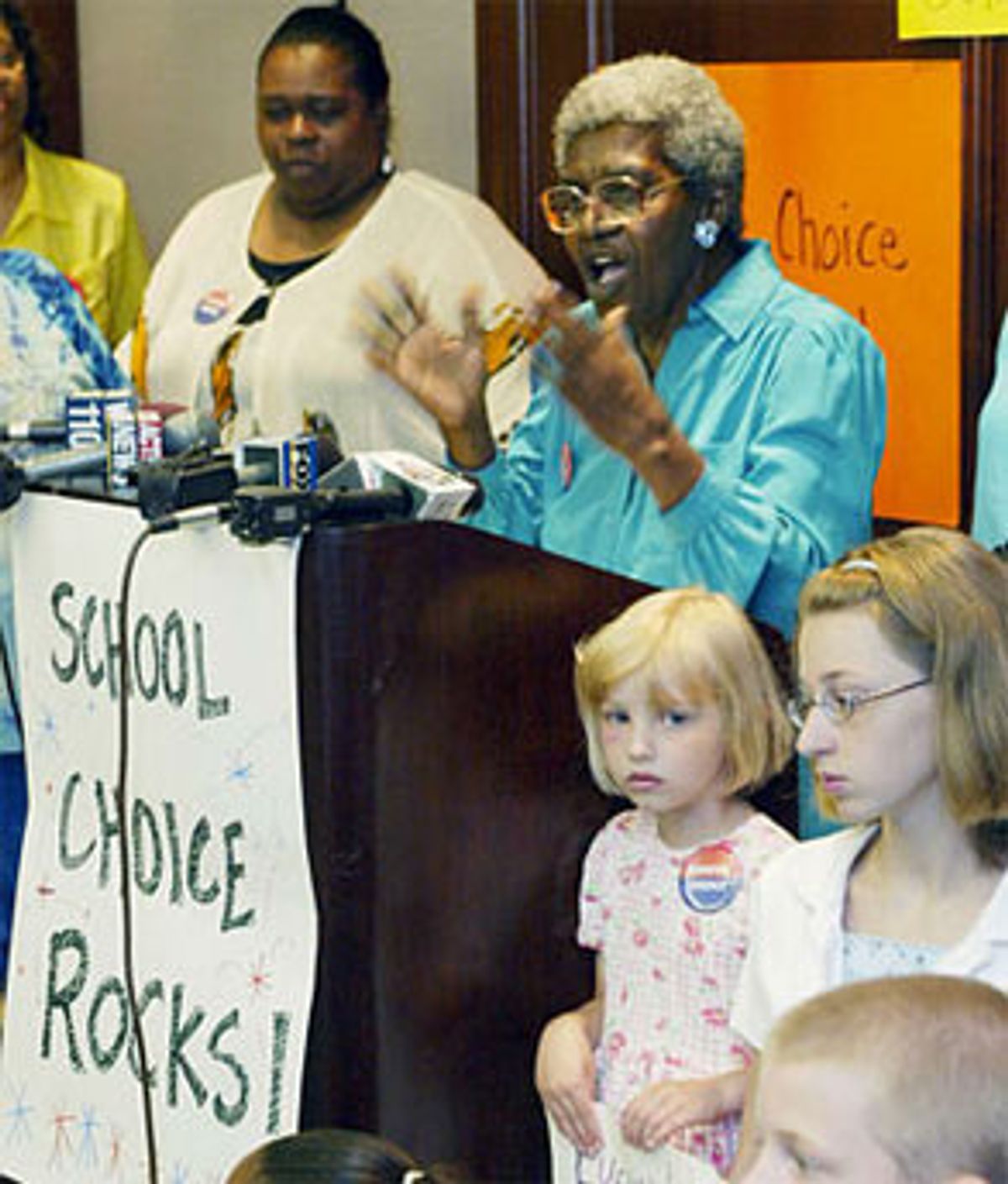 In the late 1980s, Roberta Kitchen had a sixth-grade daughter in an inner-city Cleveland school who could barely read. Kitchen asked her daughter's teacher to hold her back a year, but, she says, the teacher told her "they had already reached their quota as to how many kids they could fail." The students in her daughter's class had to share books, and since there weren't enough to go around, the teachers couldn't assign reading for them to do at home.

Kitchen says that same daughter was being threatened with rape by a classmate who was a gang member, so every day she would leave work at 2:30 to pick her up and take her home.

Now Kitchen, a single mother with five children, has another daughter in sixth grade. Instead of the 35 students who crowded her elder girl's class, her younger daughter shares her classroom with perhaps 12 other kids, and she's on the honor roll. Kitchen uses the Cleveland voucher program -- upheld by the Supreme Court on a 5-4 vote Thursday -- to pay her daughter's tuition at Saint John Nottingham, a Lutheran school. She doesn't care at all that her tax money is flowing over the wall that once decisively separated church and state.

In fact, she's furious with the civil libertarians and African-American leaders who oppose voucher programs. "They have a lot of nerve telling us, who have children in a failing school, to be satisfied, when their children don't live in Cleveland and don't have to be subjected to the type of things that kids here are," she says. "I'm angry that they can have dreams and see those dreams come to fruition for their children, while ours are hampered because our kids are in situations where if they go to school, there's no guarantee they'll come home intact."

Nor does Kitchen care about the political firestorm ignited by the high court's ruling on school vouchers. "I don't want to sacrifice my children to a school system," she says. "I refuse to do that."

Families like hers are what make the voucher debate so difficult, and so divisive. Since Thursday's Supreme Court ruling, the issue has been painted as crucial to the separation of church and state, with Christian rightists cheering and liberals and civil libertarians wringing their hands. "Today's decision is bad for education and bad for religious freedom," Steven R. Shapiro, legal director of the American Civil Liberties Union, said in a press release. Added ACLU Ohio executive director Chris Link: "Sadly, this decision essentially defunds Cleveland's public schools and leaves parents who want vouchers with no options but parochial education for their children."

Meanwhile, many on the right are delighted at the privatization of education and the prospect of public money flowing towards church schools. "With a green light from the high court, the possibilities for new programs are endless," said a statement from the Heritage Foundation, a conservative think tank based in Washington.

It's not just the right that's cheering the court's ruling, though. Many poor families who've never voted Republican in their lives are also thrilled. And that makes the issue complicated.

The Ohio Legislature introduced vouchers to Cleveland in 1996. It was a response to a crisis in the city's schools, which were failing so badly that in 1995 a federal judge ordered the state to take them over. Though smaller than Milwaukee's voucher program -- which has around 10,000 participants as opposed to Cleveland's 4,300 -- the program in Cleveland has been particularly controversial because almost all its students use the vouchers to attend religious schools.

A coalition of teachers and civil liberties groups challenged the program on church-state grounds in a suit that was finally decided Thursday by the Supreme Court. After big setbacks for the voucher movement in recent years, including overwhelming defeat in California and Michigan referendums in 2000, it's been re-energized, and conservatives are planning on introducing programs in Texas, Utah, Arizona and other states.

But while it's now clear that voucher programs are constitutional, it's far less clear whether they're good policy.

According to Meryl Johnson, spokeswoman for the Cleveland Teachers Union and a teacher at Charles Eliot Middle School, vouchers have drained $46 million from the city's school system that would otherwise have gone to tutoring, reducing class sizes and increasing security.

Students in Cleveland's program get up to $2,250 to use for private-school tuition -- for the poorest students, it pays 90 percent of private-school tuition. "Parents who are assertive are the ones who will go after these vouchers," says Johnson. "Parents who keep their eyes to the ground are the ones whose kids are left back in the public school system." The money for vouchers comes from a state fund called Disadvantaged Pupil Impact Aid, and Johnson says, "We have 77,000 children in the public school system who need the kinds of funds being drained away so that all of our children can get what they deserve."

A 2000 report by three Harvard professors and one Georgetown professor claimed that African-American students -- but, oddly, not white or Latino students -- showed small academic gains after transferring to private schools through voucher programs. Yet Johnson says comparisons between students in public and private schools are unfair. "They can pick and choose their students," she says. "They don't have to keep them. We get all the students they throw away."

She also points out that despite the rhetoric of the school choice lobby, kids in the voucher program weren't all rescued from decrepit public schools. A third of them were already in private school when the program began. Many other voucher users, says Johnson, "come from the highest performing schools." Overall, she says, vouchers don't address the problems of many of the system's neediest students.

Yet while those invested in the school system say vouchers only work for a minority of children, it's impossible to tell the families of that minority to be patient while public schools with few resources try to improve themselves.

A few years ago, Rosa-Linda Demore-Brown was a community liaison for Cleveland's Wilson Middle School. A month before summer vacation, she says, she found out that the students had gone the whole year without textbooks because administrators couldn't navigate all the red tape required to get the books delivered from the warehouse.

Now, she's executive director for Cleveland Parents of Schoolchildren, a grass-roots pro-voucher organization, and her granddaughters will soon be getting vouchers to go to private schools.

Opponents of vouchers, she says, "want to make political statements off the backs of the children. Poor people work hard every day. Our welfare system is almost defunct, so some of them are working two or three jobs. Just because they're poor doesn't mean they shouldn't have choices. They're the taxpayers -- oftentimes poor people pay more taxes than rich people. Their tax money is part of the money that everyone is whooping and hollering about, and they should have just as much right to say where their tax money is spent as the next guy, especially when it comes to their children."

Demore-Brown's comments underlie the fact that, despite charges that they're merely pawns of the right wing, many voucher advocates are genuine advocates for the poor and for civil rights. In fact, though leaders of mainstream black organizations tend to oppose vouchers, polls show that a majority of black people (a majority of whom are Democrats) support them.

Lawrence Patrick, president and CEO of the Washington D.C.-based school-choice advocacy group Black Alliance for Educational Options, recalls that a Wall Street Journal reporter called him up for a comment about slavery reparations because he assumed Patrick would be a conservative. "I told him, 'Not only am I in favor of reparations, I'm going to the [Millions for Reparations March] on August 17th'," he says. "You have to be careful. Black people, its not like we're a monolith."

Patrick's a Democrat, but he has little patience for liberal horror at government-sponsored religion. "Parents in most cases just want their child to go to a good school. They really could care less if it's Lutheran, Catholic, Episcopalian, Baptist or secular -- they want to send their children to a school that's good."

Indeed, some voucher families' attitudes go well beyond religious indifference. "The majority of parents I've talked to think it's a wonderful idea that their children are getting some religion in the schools," says Demore-Brown. "They want their children to have a faith basis, a belief in a power greater than themselves. It's been tried and true that children who have a grounding in faith make better choices as adults."

Of course, parents who are deeply concerned about church-state separation chafe at seeing their tax money supporting religious education. "This is a direct diversion of tax dollars into religious institutions' hands, and it's absolutely wrong," says Cleveland parent Anne Pallotta. Besides, she says, it's a fallacy that Cleveland schools are atrocious. One of her daughters is about to enter fifth grade in a public school that Pallotta says is "doing a good job."

She also has a 12-year-old daughter in private school, but she says she would never apply for a voucher for her. "In this country, and in my state especially, we are not supplying adequate funding to public education," she says. "I don't want to see public tax dollars used for private enterprise."

Such arguments infuriate Patrick, because they would deny poor people the same choices Pallotta has. "It's easy when you talk about it at a rhetorical level, but when you're talking about your own children, real people, real lives, it's much more urgent," he says. "Most of the people who disagree with school choice have been able to choose the best school for their child. It's hypocritical to say other people shouldn't have that. For any reason."