Irma Rombauer might have been a terrible cook, but her elegant instruction manual belongs in every kitchen. 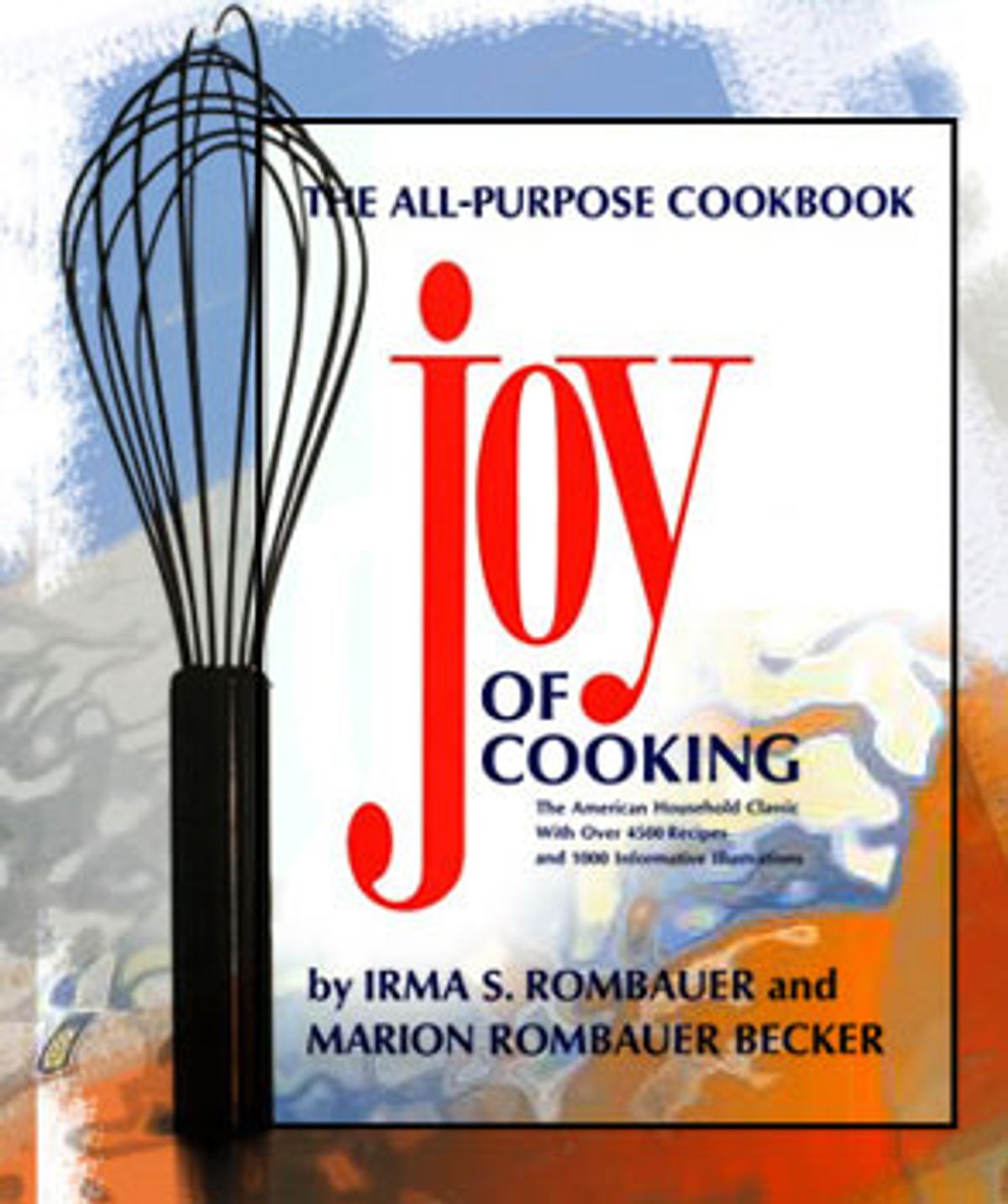 There are better cookbooks than "Joy of Cooking" -- lots of them. There are cookbooks with greater depth, cookbooks that will teach you more about technique, cookbooks that produce more splendid-looking and -tasting results. But if you're cooking waffles for breakfast, or if you have a bundle of yard-long beans and want to know what to do with them, or if you don't happen to know offhand how to make gefilte fish or gingerbread or hash browns, it is the standard reference manual, the first place you look. Its breadth and pleasantness are unsurpassed. There is no better first cookbook, and it's a trusted companion even for amateur chefs who've been cooking for decades.

In part, that's because it was written by one of their number. Irma Rombauer, who wrote the first edition back in 1931, was legendarily both an amateur cook and an amateur writer -- enthusiastic about both, not especially credentialed at either. Her family was mystified when she announced her plan to be a cookbook author: "Irma's a terrible cook," one of them noted at the time. (The history of Rombauer, her daughter/collaborator/successor Marion Rombauer Becker, and "Joy" itself is admirably related in Anne Mendelson's 1996 book "Stand Facing the Stove.") Still, with her amateur's eye, she created a new kind of cookbook, and one that ultimately became the template for a new kind of instruction book.

In the 19th century, cookbooks were essentially written for people who already knew what they were doing in the kitchen -- women, that is, who'd grown up as one of a number of women working in a large kitchen. Their recipe books were memory-joggers: notes on what went into a dish, in what order, for people who'd cooked it before and knew exactly how to poach a fish or prepare a meringue. That was starting to change by the '30s (and had changed even more during World War II, when "Joy" really caught on). Young women found themselves away from their parents' homes, in apartments or suburbs, assigned the task of feeding a family and not quite sure what to do. Rombauer had an audience waiting for her.

By the time Rombauer published the first printing of "Joy," there were two prominent schools of thought about cooking, and therefore about cookbooks. One was the myth that cooking is an advanced art, for which you need carefully nurtured innate skill to be any good. (It persists: Think of Julia Child's perennial "Mastering the Art of French Cooking," or Nigella Lawson's recent "How to Be a Domestic Goddess: Baking and the Art of Comfort Cooking.") The other was the scientific school, overseen by nutritionists who insisted that recipes had to have exact ratios of ingredients, that flavor and texture took a distant second place to preserving vitamins, that cooking was labor in service of eating properly. The title of Rombauer's book waved both misconceptions aside. Cooking, she declared, didn't need to be an art or a science: It's a joy.

There's not a Food Network version of "Joy of Cooking," and there never will be, for the same reason that there's no "Joy" school. There doesn't have to be one. TV cooking programs are basically aspirational: Maybe someday, if you're lucky, you will learn to have the knack that Bobby Flay and Emeril have. Nothing about "Joy" is aspirational. Nothing about it suggests a magician revealing secrets. Instead, it delivers uncondescending, step-by-step instructions, interspersed with elegantly laconic chat.

More important, Rombauer and Becker had the brilliant idea of concentrating on what people actually cook for their meals, and what they cook for pleasure -- the pleasure of entertaining guests or feeding a family, sometimes, but primarily the joy of cooking itself. (A lot of the time, this means dessert: "Joy" is famous for its surefire sweet stuff, and over a fifth of the current edition is devoted to cookies, cakes, pies and their accompaniments.) First and foremost, the book is useful: An artichoke frittata, the instruction notes, "keeps a small crowd happy while dinner is cooking." If a simple preparation does the trick, "Joy" may also tell you about fancier alternatives, but never insists on them, and it always mentions the easy way first.

That, in turn, means that "Joy" has no hierarchy of foods, no sense that there are cooking traditions or styles that are innately superior to others. Marinated and grilled octopus appears alongside meatloaf; potato salad with celery and mayonnaise is actually on the same page as jicama salad with lime and cilantro. The only laurel (or bay leaf) "Joy" awards is the designation "Cockaigne" -- particular favorite recipes of the Becker family (Almond Torte Cockaigne, Chicken Soup Cockaigne and the like). Unlike virtually every other cookbook, there's no agenda to "Joy" beyond "we're going to get hungry soon -- let's do something about it!"

The same real-world attitude leads the book to acknowledge that shortcuts are often just fine, and sometimes necessary. Tomato Jalapeño Chilaquiles, for instance, involves "eight ounces thick homemade-style tortilla chips." Note that "-style": Most people cooking the dish are going to buy a bag of chips and save themselves the hassle of frying cut-up tortillas, just as they're not going to try to circumvent the request for "a 28-ounce can of whole tomatoes" by canning the tomatoes themselves. Should they feel like going the extra mile for the chips, though, there's a recipe for them that calls for "top-quality storebought or homemade corn tortillas." And the stalwarts who want to start by making their own tortillas get a recipe for them; for shaping them, it suggests "two pieces of heavy plastic such as a plastic freezer bag cut open and then cut in half." No nonsense, nothing fancy: beautiful.

What elevates "Joy" from a broad-minded gesture to a masterpiece, though, is the brilliance of its technical writing and design, which like the best technical work barely looks at all technical. Cooks need to refer to recipes twice: once before they shop for or measure out the ingredients they'll need, and again when the cooking process is actually underway. That's why a list of ingredients traditionally appears before the directions proper; it means that all the ingredients are effectively listed twice, and take up a lot of valuable space on the page.

Rombauer's masterstroke was the invention of the "action method" of cookbook writing, with ingredients popping up in boldface midrecipe rather than being listed at the beginning. You can glance at the instructions and see what you're going to need. When you get down to cooking, the ingredients pop out as they're called for. And, as "Joy" expanded with American taste over the years, assimilating sesame noodles and pad thai and risotto, the compact double-column format of its design allowed the authors to cram more and more recipes into its limited page-count.

Seen as a paradigm of book design as much as a set of instructions specifically for making food, "Joy of Cooking" looks like the origin of the modern how-to book. Its breezy tone, sidebars, explanatory illustrations, intricate work with typefaces and general attitude that anyone can do this stuff originated the concepts that drive the "Dummies" and "Complete Idiot's Guide" books, but without their jokey self-deprecation. Once again, "Joy" emphasizes the pleasure in the process as much as the result, and it's as much a pleasure to browse through as it is to use. It's fun. There's a flair to its language: "Skimping on butter robs pancakes of moistness."

Irma Rombauer died in 1964, Marion Rombauer Becker in 1976. Becker's son Ethan Becker oversees "Joy" these days. The splendid current edition, published in 1997, was more or less written by committee, and it's a good thing, too -- no single cook could get it all right. (Mendelson notes that for the book's first 20 years, Rombauer suggested cooking a cup of rice in two quarts of water.) It also, blessedly, omits the confetti of little symbols that cluttered up the previous edition. Still, "Joy of Cooking" retains that all-important voice that Rombauer and Becker pioneered: the friend who casually walks you through making something good for dinner from whatever happens to be on hand. Rombauer may have been a terrible cook, but she taught generations of Americans to cook well, and to love it.