Waving it my way

My ambivalence about the flag remains. But it still flaps on my front porch, even as post-9/11 Old Glory mania fades. 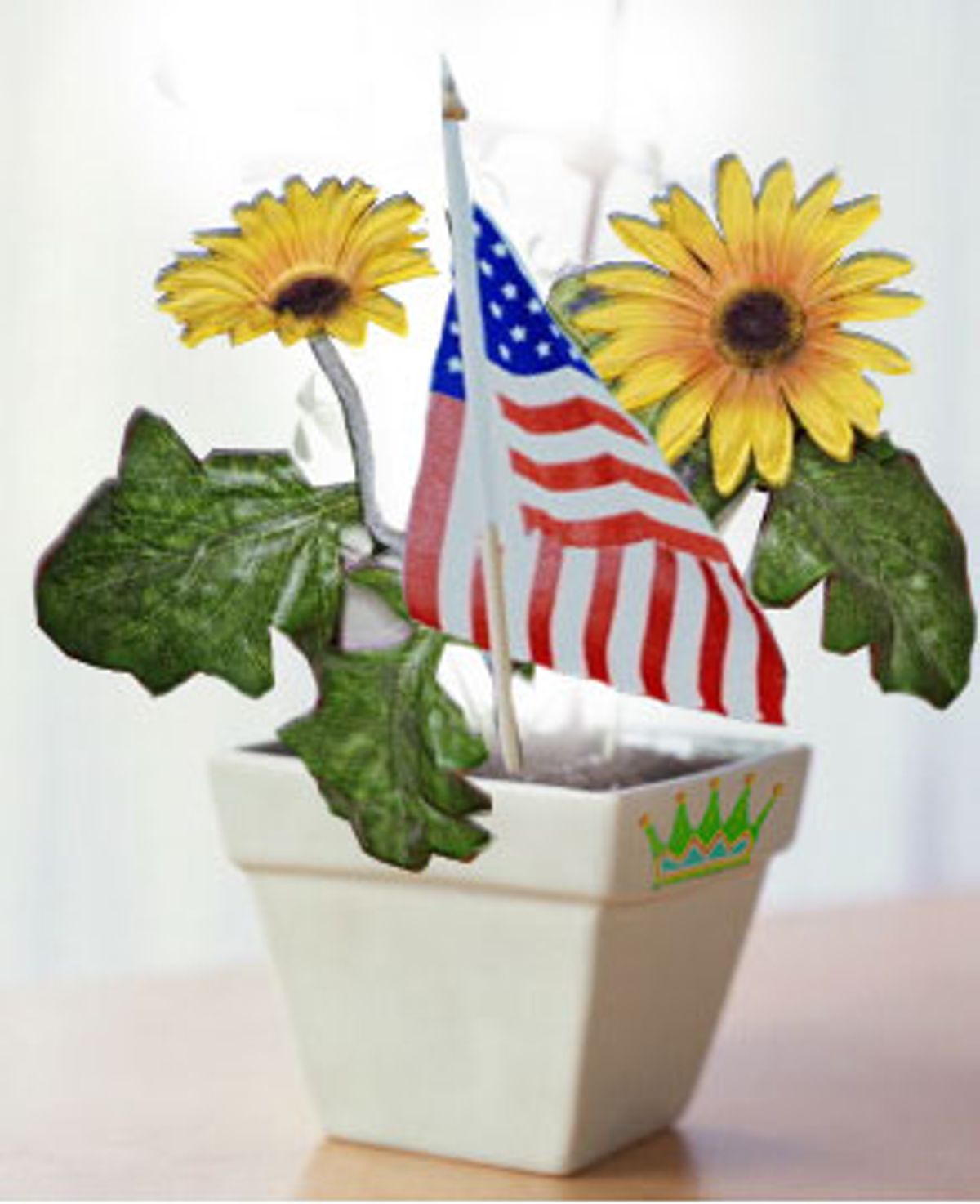 I got a lot of e-mail after "Rally Round the Flag" appeared on Sept. 18. Great cascades of it. The last time I counted, the day after the essay was published, I had received about 300 messages. I was expecting venom, death threats, invitations to perform physically impossible acts upon myself, insulting assessments of my intelligence or fitness to continue living.

There was some of that. A woman from Colonia, N.J., summed up that line of thinking nicely (and repeatably) when she wrote, "Go crawl back into your hole and just shut up."

But the overwhelming majority of mail came from people who said some variation on "Thank you for putting into words what I've been feeling but couldn't say." Getting a note like that is a treat for a writer. Getting dozens in one week goes down as a career highlight. It was also my little moment in the sun. I was quoted in the San Diego Union-Tribune, the Chicago Tribune, the (Jacksonville) Florida Times-Union, and a conservative urban affairs quarterly in New York called the City Journal, which referred to me as a Slate writer.

But looking back at the piece almost 10 months later, it's a little cringe-inducing for me. Expressions of raw emotion usually are when revisited, and emotions were pretty raw in the week after Sept. 11. The wrestling with my feelings over the flag that I described seems a bit overwrought to me from this distance, but it's easy to forget the prevailing atmosphere.

A reader in New Lenox, Ill., wrote me that week to tell me he didn't have a flag flying, but only because he couldn't find one. He'd gone to every store in town and they were all sold out. He found this note in his mailbox: "Dear JERKS, Where is your FLAG? Everything you have is from your freedom. Either show your patriotism or MOVE to another country."

I doubt that notes like that are still being left in mailboxes, but the flag is much more casually evident than it was 10 months ago. It's no longer flying from every porch and fluttering from every car window, but it does seem to be everywhere, usually in the much more convenient and durable window-sticker format. And while it's not a requirement anymore, it's still not a bad idea to fly the thing if you're concerned about what the neighbors think. Last week I had lunch in an Indian restaurant that was decorated in the usual delicate, graceful manner, except for a giant American flag tacked ungracefully in the front window. We are Americans, too, it seemed to be saying. It's OK to spend your money here, and please don't break our windows, good people.

I also cringe because of the clumsy way I wrote something. I had talked about how I love the flag because it represents, for me, the spirit of questioning and rebellion that I think is this country's greatest attribute, along with its physical magnificence. And then: "But when I see that flag flying from a neighbor's porch, I think, 'Oh boy, right-wing nut.'"

What I meant to say is that that's my knee-jerk reaction, my reflex, whenever I see the flag flying from any porch. I knew, of course, that everyone flying a flag after Sept. 11 wasn't a right-wing nut, just as I knew that everyone flying a flag before the attacks wasn't a right-wing nut. But as written, it sounds as if I thought my actual neighbors, who at the time were flying the flag, were right-wing nuts. I was new to the neighborhood, and though I never spoke to my new neighbors about it, and none of them has ever been anything but friendly and kind to me, I convinced myself that they'd all read that passage and thought of me, justifiably, as a narrow-minded left-wing nut.

I still have the same mixed feelings about the flag. I still love it, still feel ambivalent about it, still feel that it's been largely co-opted by those who claim it as being emblematic of their agenda and no other, and most of the people who do that have agendas far different from mine.

Since the initial raw feelings of 9/11 have smoothed over some, I also feel it's been cheapened by its ubiquity, in the same way that those little red AIDS ribbons lost their meaning over time as they went from being a symbol of support for those who were suffering prejudice on top of sickness to being a de rigueur accessory.

That's not necessarily a bad thing. After all, an American flag less fraught with meaning is something I would have been glad to hear about nine months ago.

My wrestling match with the flag came to a peaceful end not long after I wrote "Rally Round the Flag." That's because I got excellent advice from Salon's readers. They wrote me wondering why I hesitated to fly a flag that I claimed to love just because it's often used in ways I don't like. Fly it for your own reasons, they wrote, and don't worry that someone like you might wander by and think you're a "love it or leave it" type.

"I wouldn't agonize too much about whether or not to fly the flag," wrote a man named Brian Saunders, who described himself as a former Marine who flies the flag while supporting the right of others to burn it. "If you want to, go ahead and do it. Most people don't draw as many conclusions as you do from a display of Old Glory, other than perhaps an assumption of some level of pride in country."

I was mistaken when I wrote that I didn't have a flag. I found one that the previous owners of my house had left in a shed out back. I stuck it into the dirt of a pot of fake flowers that sits on my front porch, another gift left behind, because it's my flag too. It sits there still, a bit forlorn, a little Charlie Brown Christmas tree kind of a thing.

The stores have long since restocked. It would be easy to replace it with a nicer one.

I guess that's why I haven't.