No breast too large

Russ Meyer is as American as Grandma Moses, but he probably wouldn't have been interested in her, since she wasn't a D-cup. 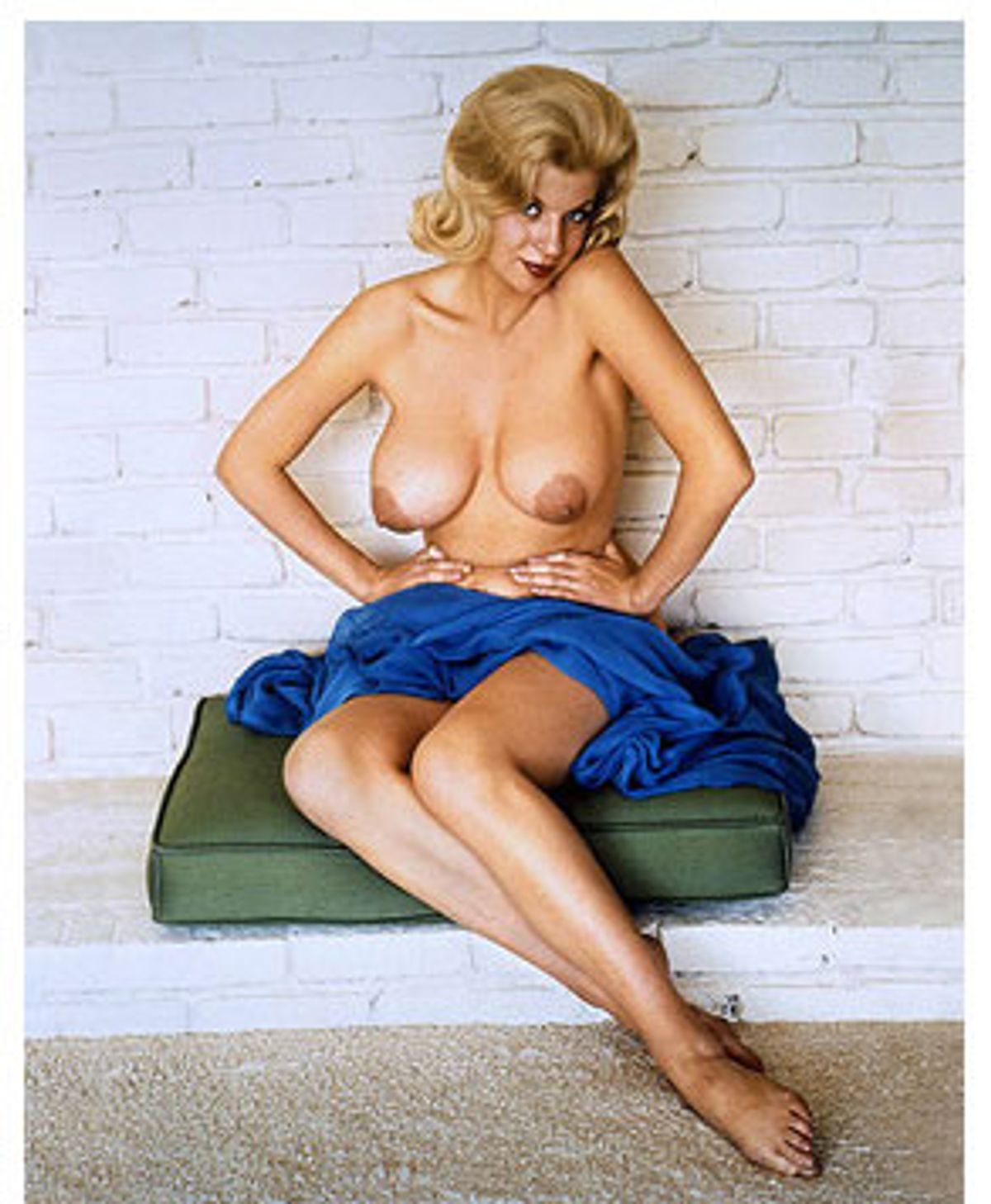 Titian had a thing for redheads. Rubens fancied fat girls. For Russ Meyer, it's tits. He's a jugs guy. A melon man. Meyer's women have aureoles that are bigger than Calista Flockhart's headlights.

After half a century of nursing this obsession, Meyer has developed his own lexicon concerning hooters -- chicks with big boobs are "melon breasted" or "pregnant breasted" or "cantilever breasted." Actress June Wilkinson has a pair of "beehives." Meyer loves women whose knockers have "globosity." He loves women with "orbicularity." He won't even look at a female unless she is a D-cup.

"Anything smaller than that is just too small for me," his press release says. "I've seen breasts as big as a triple F. There is no such thing as a breast that's too large." Indeed many of the women who appeared topless in recent Russ Meyer films have breasts bigger than grocery sacks.

Although the bulk of Meyer's artistic accomplishments consists of campy films where big-busted women make fools out of men ("Faster Pussycat! Kill! Kill!"; "Mondo Topless"; "Beneath the Valley of the Ultravixens" ) Meyer began his Hollywood career as a simple man, sprouting a Tennessee Ernie Ford mustache, who had both a camera and a wife with good-sized maracas. The wife's name was Eve, and she is the model for many of the photos now on display at Feigen Contemporary gallery in New York City (through July 27). The best picture that Meyer took of her is titled "Eve and the Red Car." Meyer's wife stands on a Pacific beach wearing a discreet 1950s bikini with a red 1954 Dodge Royal parked in the sand behind her. This is such an essential vision from the 1950s -- a decade when a man loved his car as much as his wife -- and both are beauties in Meyer's color photograph.

In "Eve With Seal," Meyer's wife rests her hands on top of a large dopey stuffed toy, looking self-consciously arch -- predating Cindy Sherman's similar self-portrait facial expressions by more than 30 years. "Eve in Lingerie" shows the wife kneeling on a beach in a kind of triumphant, naughty poor girl's Marilyn Monroe pose. "Eve With Legs Up" shows the wife sprawled upside down on a discreetly mussed-up bed, the cups of her brassiere pointing true north. There is a sweet innocence in these pictures -- yesterday's kitsch transformed into a wholehearted testimonial of how beautiful a woman can be.

On the other hand, in some shots Meyer's Eve looks seedy and deranged like a Mike Hammer bimboesque killer. "Model Playing Ping Pong" depicts a Nordic woman with long braids and appendicitis scar looking like a psychopathic Heidi. The nylons of "Model With Garters" cut into her flesh as she gives a grotesque exhalation. These Meyer women are capable of great violence. No wonder Meyer claims that "Faster Pussycat! Kill! Kill!" (1966) was the first movie that ever showed a woman killing a man with her bare hands.

Meyer was born in 1923 and came of age during World War II. Film school didn't exist back then, but Meyer spent his hitch in the Army making war films, learning the ins and outs of film production. Back in the States, he drifted between San Francisco and Hollywood for a while. He made industrial films. He shot centerfold cuties for Playboy.

In 1959 Meyer made a little nudie film called "The Immoral Mr. Teas." The plot concerned a repairman with X-ray specs who can see beneath women's clothing. And from the jump, the women Meyer wanted to see naked had big cartoon breasts like Daisy Mae in "Lil' Abner" -- a comic strip Meyer devoured when he was a kid.

In 2000 Meyer got self-reflective about his fixation in an interview for Los Angeles magazine and theorized, "People have said that my interest in breasts goes back to my mother, and that's possible because she did have big breasts." Not so fast, Russ. Several pictures of Moms Meyer appear in the three-volume self-published biography, "A Clean Breast! The life and Loves of Russ Meyer: The Rural Fellini ... his Films, Fantasies und Frauleins." Meyer's mother doesn't look particularly well-endowed. Could Meyer's mania be so intense he turned maternal molehills into mountains?

In the anything-goes 21st century, we'd call Meyer's obsession a fetish. We are not supposed to be judgmental about fetishes (unless they involve children). It's easy to forget that, sociologically, Meyer is the epitome of the 1950s -- those Jane Russell, Jayne Mansfield days. That era of bullet breasts. Cross-your-heart bras. Many women who lived through those years can testify that America's obsession with poking mammaries was both juvenile and a form of tyranny. The British model Twiggy was just a baby. Flat-chested girls had to strap on "falsies."

Sexologists Clifford Bishop and Xenis Osthelder in "Sexualia: From Prehistory to Cyberspace" suggest that the pressure for pairs of pyramids was so great that Hollywood even made Marilyn Monroe wear falsies when she was filmed (Bishop and Osthelder may be right, as nude still photographs of Monroe reveal that her bare breasts were beautiful, but not overly bountiful).

Fifty years later, Twiggy has come and gone. Ally McBeal finds herself unemployed. Modern lads (you probably know a few) read breast-and-beer mags while their mothers and kid sisters prance the streets wearing Wonderbras. Actresses have their breasts surgically enlarged into deformed shapes that have no parallel in nature, yet no one dares to call Demi Moore a freak.

Russ Meyer is more than just an artistic crank like Henry Darger, that long dead/now trendy idiot-savant artist who drew drawings of naked little girls who had penises. The 79-year-old filmmaker -- a man who hasn't announced his retirement -- seems to signify the triumph of big-tit tyranny's return to the USA.

In the end, what makes Meyer's 1950s photos important is their loving generosity. Eve's breasts seem incidental to the delight that Meyer took in photographing her entire body. When the 1960s began, Meyer's generous vision vanished. All he cared about was a female freak show of "globosity."

Filmmaker John ("Animal House") Landis once said, "Russ Meyer is as American as Grandma Moses." Landis is probably right. But does anyone remember how big Grandma Moses' beehives were?