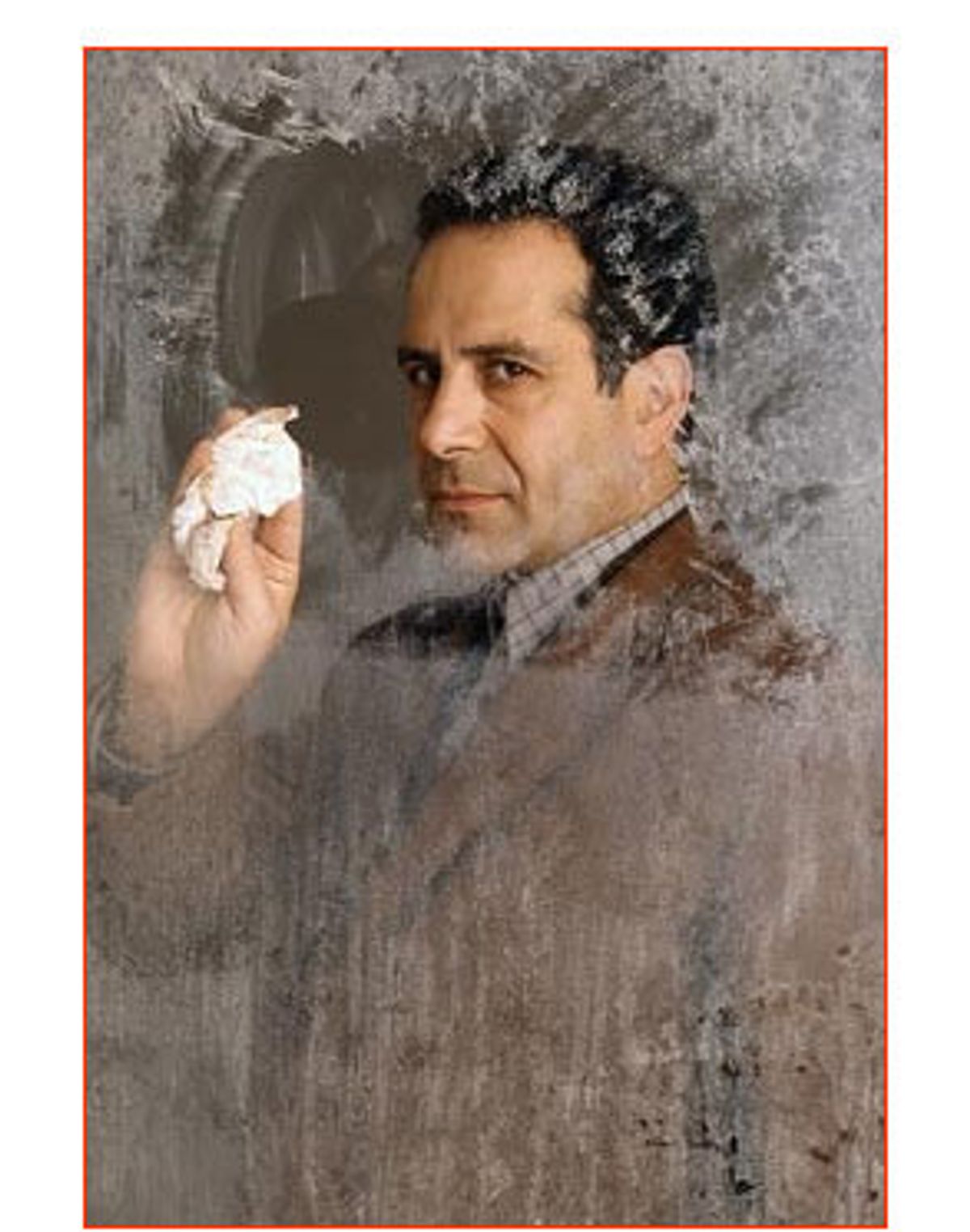 On ABC's late, great "The Job," Denis Leary's McNeil had a pain-pill habit to go with his chain-smoking and binge-drinking. On "The Shield," Michael Chiklis' cop-killing cop Mackey likes to relax with his clenched fists. On "NYPD Blue," Dennis Franz (still) plays the rage-o-holic Sipowicz, erstwhile alky and patron of hookers. What we hardly ever see is an overtaxed detective reacting to vocational stress by developing a morbid fear of milk, which is just what happens to the title character of "Monk," a new USA Networks series premiering Friday.

Tony Shalhoub plays Adrian Monk, a former star detective on the San Francisco Police Department who loses his badge after the unsolved murder of his wife brings on a bad case of OCD, further compounded by an abnormal fear of germs, heights, the dark, crowds and the aforementioned dairy product. Trying to inch his way back onto the force, Monk does some private consulting on difficult cases, but devotes most of his time to obsessing about whether he left the oven on.

At the very least, this is an ingenious premise for a stale genre. After all, detectives are paid to notice things that other people don't, like throw pillows that are slightly, maddeningly out of place. It takes a special kind of mind to recreate an event from barely-perceptible clues left behind at a crime scene, and in Monk's case, the stress of the job, combined with a traumatic and frustrating event (the unsolved murder of his wife), stretches those traits to the limit.

Monk is a guy who can't see the forest for the trees, but luckily for him, detective work is all about the little things. His affliction is problematically double-sided, however: The same obsessive attention to detail that helps him focus on minutiae and stay there until he uncovers some hidden meaning can just as easily distract him from the problem at hand.

"Monk" kicks off with a two-hour movie concerning an assassination attempt on a San Francisco mayoral candidate. When the candidate's bodyguard is killed during the shooting, the current mayor asks that Monk be brought onto the case. Monk's former boss, Capt. Leland Stottlemeyer (Ted Levine), reluctantly engages his services and spends the rest of the episode careening between hair-pulling frustration at Monk's idiot-savant shenanigans and gnawing jealousy of his uncanny powers of observation.

Monk's assistant/nurse, Sharona (Bitty Schram), acts as his baby sitter on crime scenes, prying him away from desk lamps (which he pokes at obsessively) and trying to keep him focused on the problem at hand. Their relationship is a refreshing twist on the good cop/bad cop (or new cop/old cop, male cop/female cop, old cop/young cop, loose-cannon cop/methodical-tortoise cop) routine; not only because Sharona is not a cop, but because she is in effect his surrogate mother and voice of reason. At a crime scene in Santa Clara, some 40 miles from his apartment, he is convinced he can smell the gas seeping from his oven. "Pull yourself together, concentrate and be brilliant," Sharona snaps. Clearly, Monk's own motivational pep talks to himself ("You can't sweat the small stuff. Just go with the flow") aren't cutting it.

Over the course of the past decade or so, Woody Allen has all but spoiled neuroticism as an endearing character trait, but the preternaturally lovable Shalhoub -- a veteran of numerous Hollywood character roles -- revives and redeems the tired archetype. Intelligent, intense and (hyper)sensitive, Shalhoub is quietly winning as a guy trying to do the job he was born to do in a world that seems dead set on driving him bonkers. Shalhoub and Schram play well off each other, especially in those scenes in which his craziness cuts in on her personal life. (Monk drops in on Sharona during a first date, and after a few minutes of listening to her date describe his illustrious job and educational background, Monk abruptly announces that the guy is lying. On their way out, she angrily reprimands him, "Everyone embellishes their résumé!")

The other characters in "Monk," however, are not as well developed. It's hard to buy Stottlemeyer as the head of a major metropolitan police department, for instance, when he keeps offhandedly dismissing clues as if he were waving away flies. And watching him play an irate Ricky to Shalhoub's inspired-but-bumbling Lucy could get old. It's enough to make you wonder how any crime-solving got done at all while Monk was exiled.

As on most episodic cop shows, the resolution is a trifle too neat and the hero a tad too superior to the people around him for "Monk" to feel like much more than a throwback to old-school puzzle mysteries, where every crime is masterminded and every criminal would have gotten away with it if not for that meddling oddball genius. Most disappointing is the standard "I confess!" ending, in which the cornered criminal spills not only the beans, but his motives, his missteps and his innermost feelings about it all. But for anyone who can't relate to the terse, jargon-infused mumblings of most modern cop dramas, "Monk" is a welcome return to the "Columbo"-style sleuth, the kind of guy who lacks the interpersonal skills to slam drooling sickos against precinct walls, but can deduce what kind of cigarette a murderer was smoking with a quick sniff of a curtain.