Dragons torch the earth as manly men with weird hair battle them in this colossally misconceived dud. 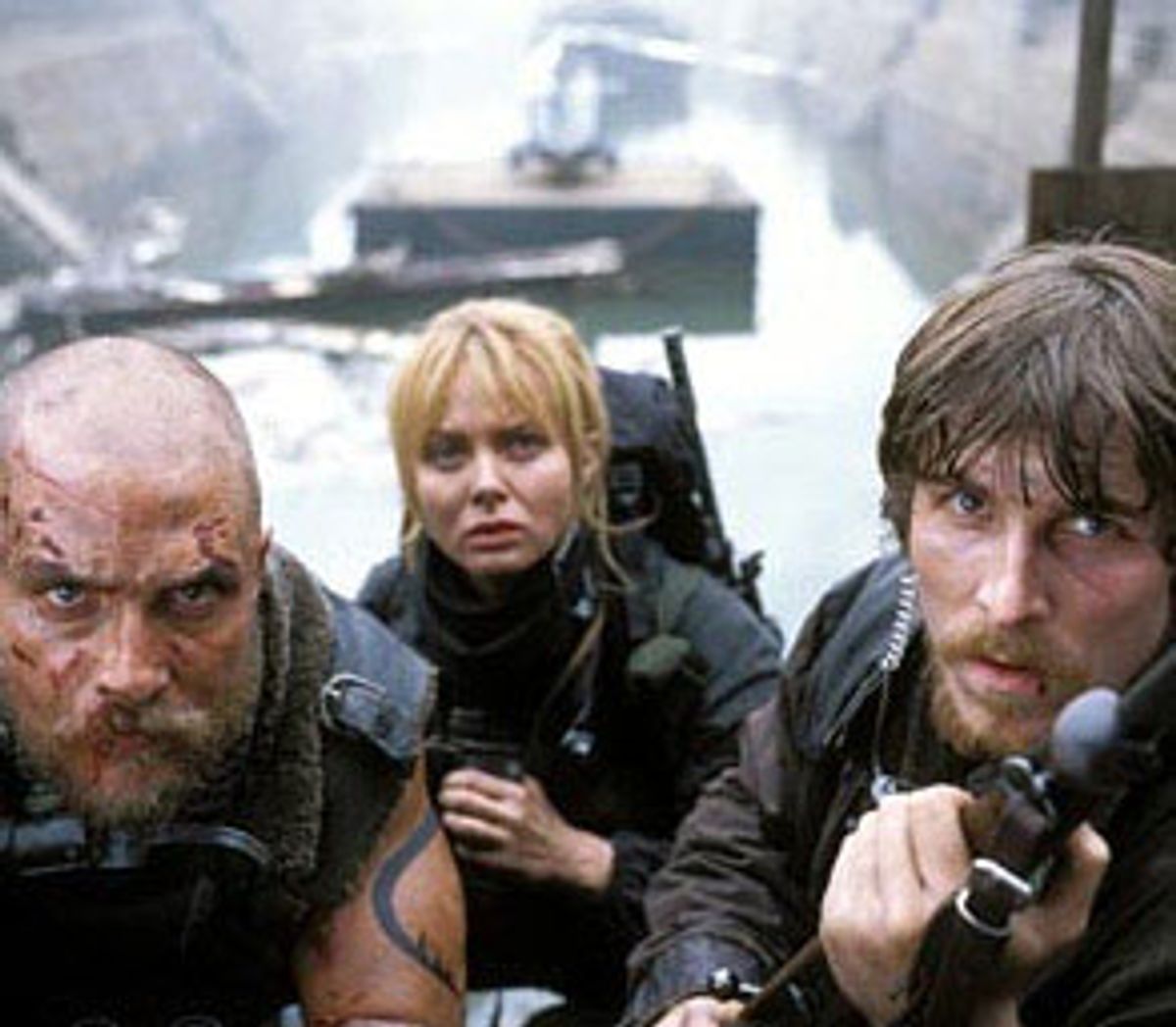 "Reign of Fire" is a movie starring Matthew McConaughey and Christian Bale. It's about great hulking beasts who lumber and wheeze across the devastated countryside of a dystopian future world, scourging everything before them with their foul breath.

Then there are all those dragons.

This is exactly the sort of big, stupid, recklessly misconceived action film that you expect to see when video games are made into movies. OK, technically speaking the video game of "Reign of Fire" doesn't exist yet. It will soon, and it will undoubtedly be more fun than this loud and assaultive but fundamentally boring spectacle, which only displays how much money Hollywood producers can spend and still wind up with something that's essentially a half-assed rip-off of other things that weren't that original in the first place. It might make a good subject for "Mystery Science Theater 3000" if that show still existed, or if you could hear the robots talking beneath the deafening pseudo-Wagnerian score that now accompanies all action movies.

There's really nothing wrong with the premise of "Reign of Fire," as ludicrous science-fiction premises go, but director Rob Bowman, who almost single-handedly sank the entire "X Files" franchise with his tepid 1998 film, does almost everything he can to ruin it. It's sometime a bit further on in the 21st century, after an excavation project in London has let loose a plague of fire-breathing dragons that have pretty much destroyed the whole planet. (All of this happens in about the first eight seconds of the movie.)

Is anybody left except for the courageous band of Brits holed up at a castle in Northumberland, under the command of the rugged and manly but brooding Quinn (Christian Bale)? Yes! As history teaches us, whenever the denizens of Blighty are in trouble the Yanks show up with their can-do attitude, their high-technology gizmos, their tobacco products, their tattoos. In this case, it's a cowboy band of "Kentucky irregulars" with tanks, choppers and computers, headed up by the bald-headed, goatee-wearing, cigar-chomping Van Zan (Matthew McConaughey), who says he knows how to kill those godless communist dragons.

Bowman and friends undoubtedly spent a sum equivalent to the misstated phantom earnings of WorldCom on the action sequences here, but they're generally hard to follow and not that exciting. The dragons are OK, I guess, in that they look pretty much like your classic early-medieval dragons with demonic spade tails and leathery, moth-eaten bat wings (and a little bit like cutting-room leftovers from "Jurassic Park"). Gonzo guys jump out of helicopters and try to catch them in nets, which seems like a remarkably bad idea and doesn't work. Despite all the fancy 3-D digital vector analysis and the tough-talking Euro-babe helicopter pilot (played by genuine Polish-born Euro-babe Izabella Scorupco), who wears tons of makeup in defiance of the apocalypse, basically the dragons burn everything and kill everybody and the survivors are all bummed.

"Reign of Fire" isn't really about the dragons. Come to think of it, it isn't about anything. But it sort of pretends to be about the conflict between Quinn and Van Zan, two manly men with weird hair and dubious hygiene who look like they've been pumping iron in the penal systems of their respective nations. McConaughey and Bale spend a lot of time snorting and mouth-breathing and standing chest-to-chest staring each other down and generally acting like they're about to go seriously gay all over each other. (I'm not saying that's a bad thing.) Maybe somebody pitched this movie in a studio meeting as Jesse Ventura vs. Ted Hughes in a remake of "Mad Max Beyond Thunderdome." Plus dragons. And minus that awesome theme song by Tina Turner.

Actually, that sounds a lot better than the movie Bowman and company wound up with. Like so many people who make Hollywood movies these days, Bowman and his posse of screenwriters (Gregg Chabot, Kevin Peterka and Matt Greenberg) seem fundamentally uncomfortable with storytelling. They just keep the action beats coming and fill up the interstices between them with disconnected scenes that are supposed to be emotionally powerful: stare-downs between Quinn and Van Zan; random paternal-type moments between Quinn and his adopted son (Scott Moutter) or fraternal-type moments between Quinn and his pal Creedy (Gerard Butler).

With end-of-the-world stories you've basically got two choices. You can begin in the everyday familiar world and then take us through the pathos and terror of its destruction (as in the classic "War of the Worlds" movie and its many imitators). Or you can begin in the devastated, post-apocalyptic future, à la "Road Warrior" or "Waterworld" or "Planet of the Apes," and incrementally reveal -- or perhaps only suggest -- how this horrifying change in the world we know and love came about.

"Reign of Fire" clumsily tries to split the difference, wasting precious early moments on an utterly unscary dragon-discovery scene and then, every so often, dropping bits of information we already know as if they were big revelations. It has a feeling of rushed, last-minute rewrite; I can't help wondering whether Bowman et al. shot the whole thing without quite knowing where the dragons came from and what their story was. And let me just state a Law of Movies right now: A monster movie with boring monsters is a boring monster movie.

There are two or three scenes in the middle of "Reign of Fire" when it starts to feel like a real movie about a recognizably human world and not just a collection of ambient noise, smoldering glares and digital effects. In the best of these, Quinn and Creedy act out the climactic duel between Luke Skywalker and Darth Vader for the horrified and delighted kids of Quinn's castle. It's a witty glimpse of the truth that pop culture remains close to myth, and that myth will find a way to survive as long as human society does. Then again, if the best the future has to offer is George Lucas reenactments, maybe the fire-breathing lizards deserve their shot.