Giant spiders attack, get squashed into viscous goo. Repeat. Would-be camp classic is a big snooze. And what's with the missing hyphen? 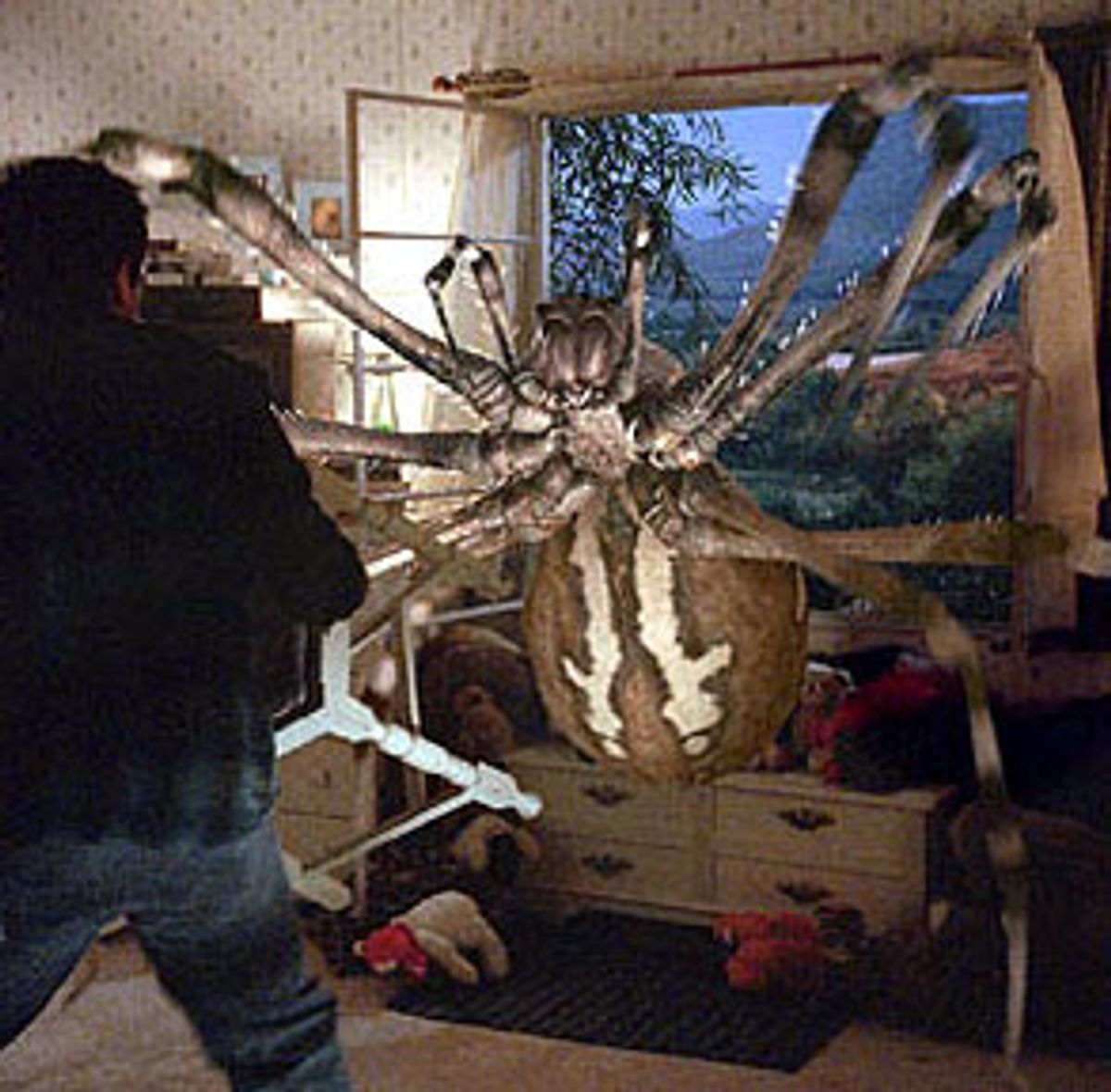 A hyphen isn't the only thing missing from "Eight Legged Freaks." (As any copy editor could tell you, this title suggests that the movie is about eight freaks, each of whom possesses at least one leg.) Wit and imagination have joined that AWOL punctuation mark, perhaps in the same place where socks go when they vanish from your dryer. The filmmakers, director Ellory Elkayem and his co-writer Jesse Alexander, had a notion: to spoof those bad invasion-of-the-creepy-crawlies movies from the '50s, the monsters of choice here being giant spiders. But you need more than a concept to make a movie work. And "Eight Legged Freaks" ends up a lot like the "Scream" franchise did: asking to be congratulated because it knows the material is crap.

The movie starts out promisingly enough, with a Rube Goldberg explanation for the arachnid growth spurt that involves a bunny rabbit in the middle of the road, a swerving truck and a toxic-waste spill in a pond. And there's a good creature-movie weirdo, a loner who raises spiders and feeds toxic-waste-engorged bugs to his beloved furry little things. This character is played by the deeply strange Tom Noonan, who seems born to raise bugs the way Dwight Frye (in "Dracula") seemed born to eat them.

The chemically enhanced strength of the spiders, enabling them to jump across the landscape as if playing a predatory game of leapfrog, is a neat idea. But not when you keep seeing it again and again. And again. "Eight Legged Freaks" shoots its load very early on. It keeps showing us the same things over and over, without any variation. The spiders keep leaping, the townsfolk keep getting eaten and the bugs keep exploding into viscous green goo when they get shot.

It's clear that Ellory and Alexander are trying to go past the horror-movie convention demanding that some characters be spared while some aren't. But when moviemakers keep confounding the same convention, the result is every bit as predictable as what they're satirizing. What's the point of casting Scarlett Johansson as a plucky teen if it's the same old scream-queen role? You can only see so many house pets get snatched by the spiders and so many helpless characters (including the proverbial sacrificial black man) get their insides sucked out before any shock or black humor wears off. Those moments are, in most monster movies, the prelude to the big confrontation scenes. They keep coming here, even in the midst of the confrontation, because the filmmakers haven't devised any other means of jazzing us up.

There has to be a point at which the bugs turn out to have capabilities we didn't know they had, if only to make them villains worth hissing. And there has to be a point at which the humans are allowed some discovery that lets them turn the tables on the bugs, if only to signal to the audience that the humans are alive enough to keep rooting for. One blast from a shotgun looks pretty much like any other, so the movie doesn't even fulfill the yuck factor by finding some colorful or extreme way to kill the bugs. And nobody involved with the movie seems to have noticed that when the bugs are finally defeated, it's in a way that, not an hour before, the movie has shown us doesn't work.

In fact, this is one of the laziest screenplays in memory. The movie makes a big point of how Mike (Scott Terra), the 10-year-old son of the local sheriff (Kari Wuhrer), knows what's going on before anybody else does. But they haven't bothered to include a scene where the kid gets to explain it to the townspeople or, even more crucial, a scene where his brains pay off and he gets to show some ingenious heroism.

The spiders themselves, hairy and scurrying on their long, spiky legs, are itch-inducing at first but get pedestrian pretty quickly. Anyone who wants to see how to handle creatures should take a look at the fire-breathing dragons in the new "Reign of Fire." At its best (before it becomes too much Sgt. Rock and not enough St. George), that movie has a Gothic elegance, like a myth plucked from the English Middle Ages. And the dragons are superb, largely because we're allowed only fleeting glimpses of them and thus they preserve our sense of wonder and fear.

The real comparison to "Eight Legged Freaks" is Ron Underwood's "Tremors," a movie that functioned both as thriller and parody (and had an appealing cast of oddball characters to boot). "Eight Legged Freaks" winds up a lot closer to the movies it's taking off from than it cares to admit: cheap, unimaginative and predictable. It's the horror movie equivalent of one of those "Saturday Night Live" sketches that drags on interminably, though nobody in it seems to have any idea of just what the joke is.