A legal war without victory

After months of bold posturing and fierce infighting, both sides in the case of American Taliban John Walker Lindh decided to cut their risks. 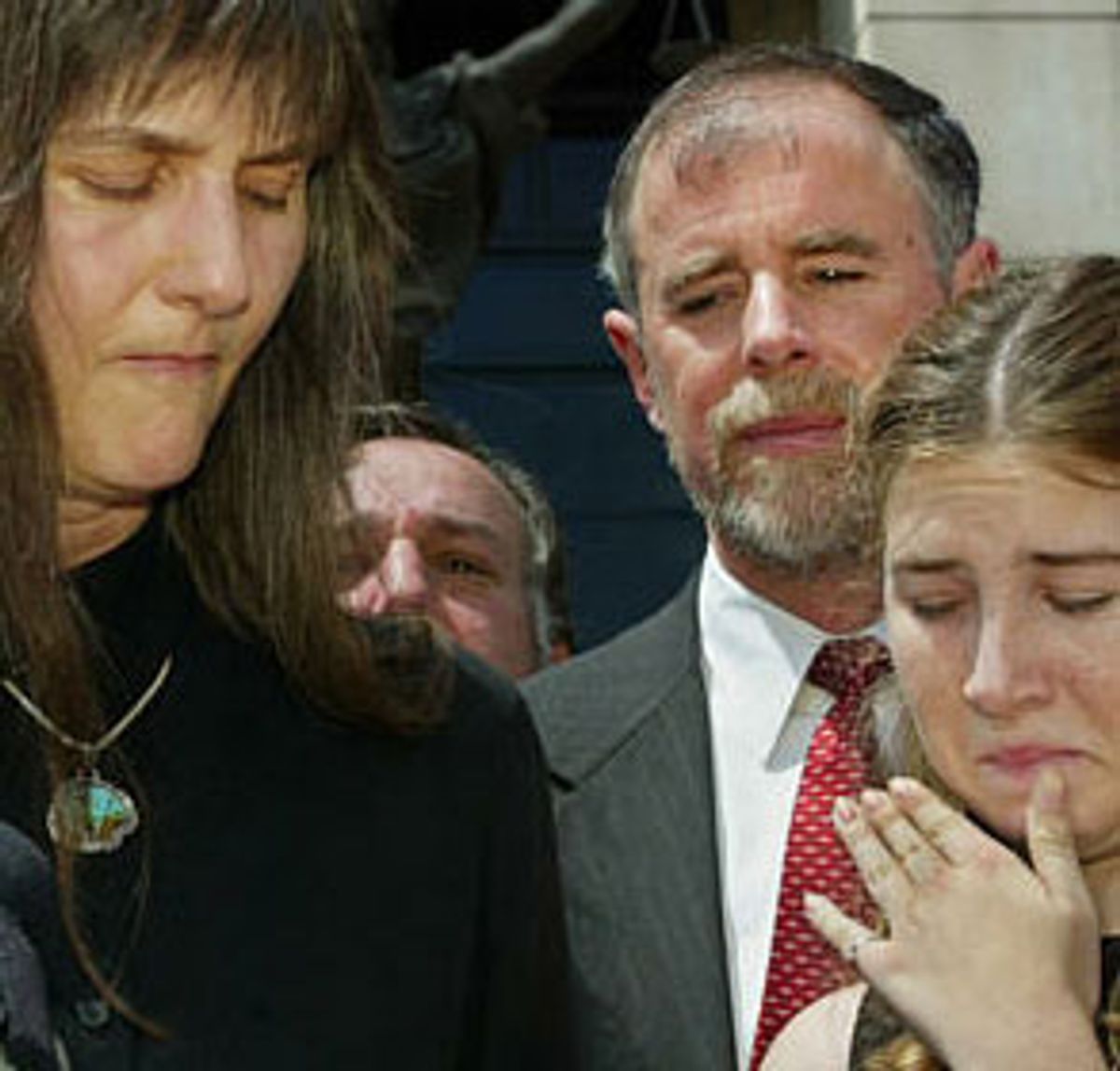 After more than seven months of legal maneuvering, John Walker Lindh, the young man from suburban Marin County, Calif., who decided to join the Taliban last August, has been convicted for the crime of failing to keep up with the Federal Register. Had he read that journal of U.S. legal notices as he was huddled in a trench facing Northern Alliance forces, he would have learned that, following the al-Qaida attack on the World Trade Center, he was suddenly in violation of law against "supplying services to" an enemy of the United States.

For that crime, which was established by a decision of the U.S Treasury Department, and for the additional crime of carrying a hand grenade while he was a Taliban soldier, Lindh will be sentenced to up to 20 years in federal prison after striking a plea agreement with the government Monday.

Lindh had been facing life in prison for his involvement with the ousted Taliban regime in Afghanistan. But the plea agreement appeared to be a tacit acknowledgement by the federal government that its case was at best uncertain against the 21-year-old Islamic convert. Dropped were all charges of terrorism, consorting with al-Qaida, and attempting to kill Americans. Nor did the agreement mention the government's earlier claim that Walker had been guilty of participation in a plot to murder CIA agent Johnny Spann, who died in an uprising of captured Taliban and al-Qaida fighters shortly after he had been interrogating Walker at the Mazar-i-Sharif prison.

"This was not a victory for either side," says David Cole, a lawyer with the Center for Constitutional Rights who had filed a brief with the court regarding some of the charges facing Walker. "The government had to give up its main charges in return for guilty pleas on what are really the most technical of charges." At the same time, Cole notes, Walker had to accept a stiff sentence for those two counts to which he pleaded guilty.

The plea bargain came as a surprise not just to the public, but apparently to most of those in the federal courtroom at Arlington, Va., including U.S. District Court Judge T.S. Ellis, who was preparing to hear arguments concerning the issue of whether the government could use statements elicited from Walker while he was first in captivity in Afghanistan. The agreement reportedly was negotiated in secret over the weekend among attorneys for the two sides, after President Bush on Saturday gave federal prosecutors the go-ahead to cut a deal.

The agreement seemed to represent a decision from both sides to minimize the risks they faced by going through with a trial. With the compromise approved, both sides were quick to declare victory.

"This is an important victory for the people of America in the battle against terrorism," said U.S. Attorney and lead prosecutor Paul J. McNulty.

"He will now spend the next 20 years in prison -- nearly as long as he has been alive," Ashcroft said.

Lindh attorney Tony West agreed that 20 years was "a stiff sentence," but he said things could have been much worse for his client. "We were concerned about the venue and the pre-trial publicity," he said. The Eastern District of Virginia is widely known as one of the most conservative court districts in the nation -- one reason the U.S. Justice Department goes out of its way to try major criminal cases there, and why prosecutors chose to fly Lindh into Dulles Airport directly from Afghanistan. West notes that the jury for Lindh's trial would have been selected from a region where many Pentagon families live.

"We could have won our case and gotten not guilty verdicts on the other eight counts," he says, "and we still could have ended up losing on these two and ended up with a 40-year sentence instead of 20. We agreed John was a soldier for the Taliban and he was armed."

The question, then, becomes whether or not Lindh intended to fight against America. At the time Walker joined up and went to the front in August 2001, the Taliban were fighting against the Northern Alliance, long allied with Russia and the former Soviet Union.

West said federal prosecutors were willing to cut a deal with Lindh "because they were unsure whether his statements made in captivity would be allowed in court, and they were concerned about the testimony that would come out about the conditions under which he was held in Afghanistan."

Irwin Schwartz, president of the National Association of Criminal Defense Attorneys, concurred that both sides were seeking to maximize gain and minimize the risk of loss in striking the deal. "Plea bargains occur at the point when both parties think they have something to gain," he said. "The defense did a remarkable job of setting up a whole range of thorny issues for the government. It's no surprise that the government decided to cut a deal. Unfortunately, now we won't find out how those issues would have been resolved."

Efforts to reach U.S. Attorney McNulty for comment were unsuccessful.

The agreement now could have a bearing on the cases of two other American citizens who have been arrested as part of the war on terror: Yaser Esam Hamdi was born in the U.S. to Saudi parents and they lived there briefly while they were on an exchange program; he was captured in one of the combat zones. Jose Padilla, aka Abdullah al Muhajir, is a former Chicago street gang member who converted to Islam and is accused of plotting with al-Qaida officials to detonate a "dirty bomb" using low-grade radioactive materials. Both are being held without charges in military brigs, where they are being interrogated and called foreign combatants.

While some have cited their cases to justify the government's plans to use secretive military tribunals to prosecute some combatants, both sides in the Lindh case yesterday agreed that a captured soldier in a conflict can be tried effectively in the civilian American legal system.

"This case does show that the government can use the ordinary criminal process and doesn't need to invoke the whole military tribunal concept when it catches someone like John Lindh," Cole said.

"This case proves that the criminal justice system can be an effective tool in the fight against terrorism," McNulty told reporters outside the courthouse.

Both Hamdi and Padilla are being barred from seeing attorneys, and Ashcroft has suggested that the government, instead of bringing them to trial, may just hold them indefinitely, like the captured Afghan and foreign fighters being held at Guantánamo Bay in Cuba, for the duration of the war on terror. Lindh, who was caught before the other two, was instead brought to the U.S. and indicted on federal criminal charges.

Had Lindh's case gone to trial, a number of major issues could have had an impact on those other cases involving Hamdi, Muhajir and the captives on Guantánamo -- a factor that may have been paramount in the government's decision to strike a deal with the defendant. Key among those issues was whether statements made to military interrogators could be allowed in court -- particularly if those statements were made under threats of abuse, and if no Miranda warning about the right to remain silent and the right to an attorney were given to the captive.

Lindh's attorneys, in the hearings set for this week, were preparing to question military personnel and a CNN reporter who had witnessed or participated in Lindh's first interrogation by Spann, to determine whether he had been "read his rights" and whether he was being threatened or maltreated.

Lindh had been shot in the leg at the time he was captured, and was malnourished and dehydrated. He had claimed that his wound was left untreated for days while he was held in a dark, closed metal shipping container, and that he was only removed, while taped to a stretcher, when he was being interrogated. In his court papers, Lindh had alleged that when he was finally read his Miranda rights by an FBI investigator, on Dec. 3, at each point where it refers to a right to counsel, the agent would add, "Of course there are no lawyers out here."

At that point, Walker1's family had already hired San Francisco attorney James J. Brosnahan, something Lindh was not told. "The government never would have gotten away with using confessions obtained through that kind of treatment in any other case," Cole said yesterday.

The government has denied that Lindh was mistreated in any way during his captivity, and Lindh, as part of his plea bargain, has had to agree to that.

A second issue that arose in the Lindh case that will now remain unresolved is whether he had a right to call, as witnesses, other captured combatants. The government, in its filings in the case, had acknowledged that some of the captured al-Qaida fighters being held at Guantánamo Naval Base had exculpatory information concerning Lindh. Specifically, according to sources familiar with the case (in which most documents have been sealed), they were apparently saying that the uprising of captives during which Spann was killed had been spontaneous, not planned, and was motivated by fears of what would happen to them at the hands of their Northern Alliance captors, not by a desire to kill the Americans.

When Lindh's lawyers said they wanted to go to the base to interview those witnesses, however, the government objected, saying that they were concerned that such interviews could jeopardize the ongoing interrogation process. As someone close to the Lindh case puts it, "What they meant was that they were afraid those guys would find out that they might have a right to a lawyer and a trial."

Judge T.S. Ellis declined to allow the defense to question the witnesses in person, requiring them instead to provide military interrogators at Guantánamo with written questions, which would be put to the potential witnesses as part of regular interrogation sessions. Written responses were being supplied to the defense. Significantly, however, the judge indicated at the time that he was inclined to think the defense would have the right to put those witnesses on the stand once the formal trial began -- something the government was not happy about.

With Lindh's case over but for the scheduled Oct. 4 sentencing, the legal war on terror now moves to Guantánamo, and to the two other American captives from the conflict, both of whom are expected to challenge their incarceration without charges.

Lindh, meanwhile, may yet be free sooner than the plea agreement suggests. The agreement refers to his being returned to prison if he is in violation of the terms of any "supervised release." The judge is not bound by the 20-year sentence cited in the agreement -- though that does set a maximum term -- and could sentence him to a shorter stay in prison.

Lindh also has agreed to cooperate with prosecutors and the Department of Defense in efforts to combat terrorism.