Connie Chung's new talk show, a parade of pedophilia and murder fueled by inane kindergarten-teacher musings, is so flat-out weird it just might acquire a cult following. 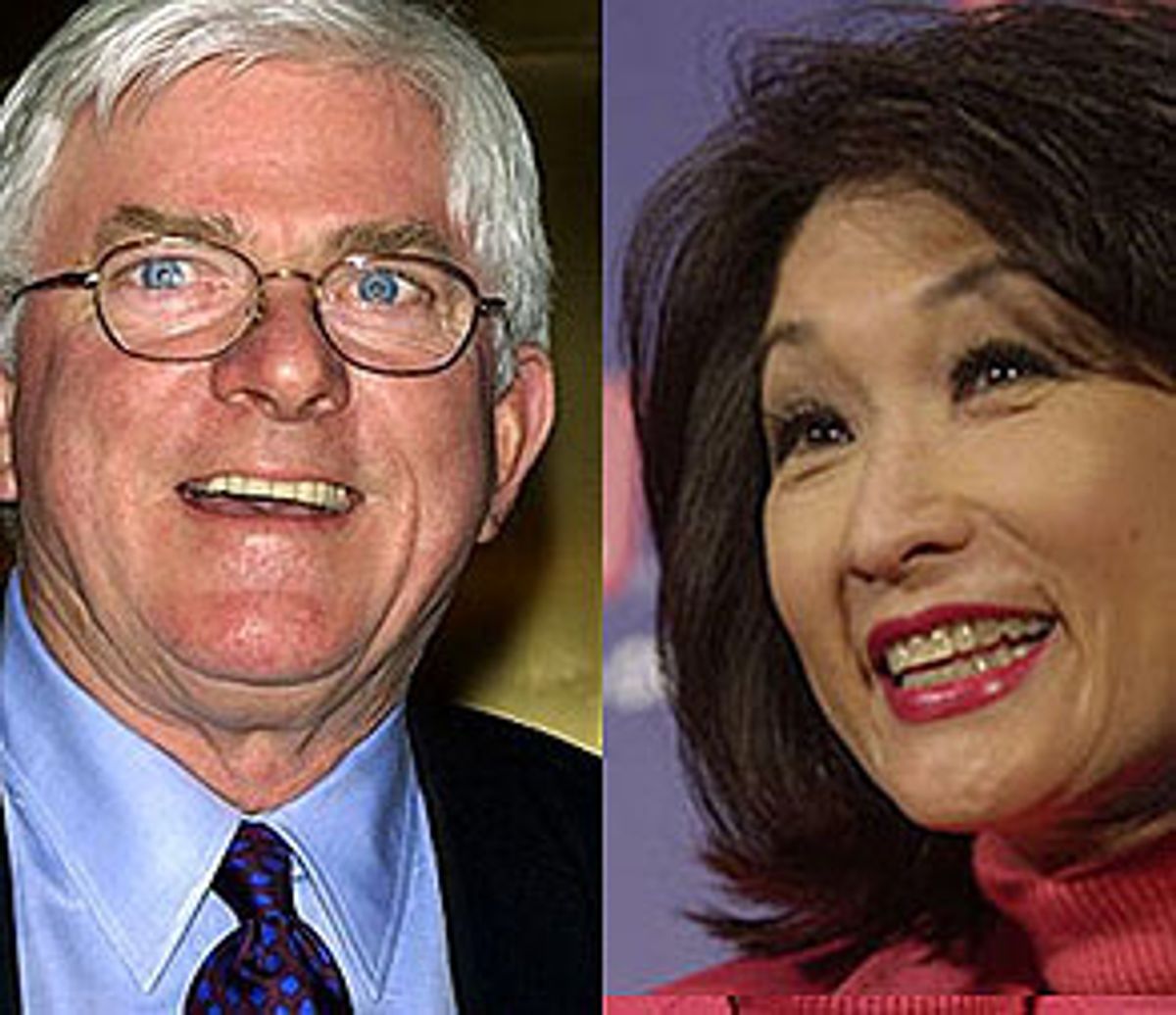 Orange being the color of insanity, it's no surprise that it features so prominently in the overall look of CNN's "Connie Chung Tonight." No signature hue for this show, now in its third agonizing week, would make more sense. I'm not suggesting that Connie is actually crazy, but she does seem a little out of sorts. Listless, distracted, occasionally manic. Given to the occasional inappropriate remark. She routinely blanks out. Stumbles while straining to read her cue cards. Says "Thank you" and "Are you finished?" before interviewees have furnished their replies to questions she posed seconds earlier, but long before the station cuts to a break.

OK, so her emotional response system appears to be in need of alignment. The world is full of slick, polished and commanding anchors brimming with authority and poise. At least Connie's not afraid to chime in with a giggly "Noooo!" and "That's incredible!" in the manner of a high school cheerleader chatting with an online pedophile. Delivery, poise, lucidity, coherence, the ability to understand a joke or reference, a solid command of the facts and having a clue aren't everything.

Despite the drubbing she's received since her show debuted, Chung still inexplicably enjoys a reputation as a "tough" and perspicacious interviewer. No doubt there are subjects to which her style might be perfectly suited. If she were interviewing a well-behaved preschooler, she'd be right on the money. Otherwise, her slow, earnest and deliberate delivery, so soothing in a kindergarten teacher, seems ill-suited to the rape and murder stories that have already become her stock in trade.

I haven't even mentioned Chung's disconcerting word choices, as when she says: "Forty-two-year-old Carol Sund, daughter Julie, 15, and family friend Silvina Pelosso, 16, were savagely killed by a handyman." Somehow the inclusion of the murderer's occupation feels jarringly irrelevant; it's as though, in her eagerness to present us with all the facts, the important ones get lost in the shuffle.

It's hardly been a slow news month in the world, yet "Connie Chung Tonight" seems fixated on grisly tales of personal tragedy and senseless loss. For every story about a murdered child, there is an interview with a grieving parent. Granted, it's impossible to make sense of events such as these, but it's also hard to see the point of insights such as this one, made as Connie interviews the parents of the murdered woman. "Carol, you did say one thing which I thought was quite extraordinary. You said, it's remarkable how normal he looks, and yet he is of course a monster."

Indeed. One is, of course, always on the lookout for a Cyclops or three-headed dog, but regular-looking guys are not generally thought to be dangerous. Earlier, referring to the murder trial, she mused to the victims' family, "The details have been so gruesome. I don't know how the two of you have the courage to sit there and listen to it."

If her observations are often startlingly inane, her insights and opinions are sometimes amusingly nonsensical. In a piece on John Walker Lindh's prison sentence, she talked about the disappointment that slain CIA agent Johnny Micheal Spann's parents felt at the verdict, saying, "They thought he should get the death penalty at least. At the very least!" Who knew there was more?

In an earlier piece on Paul Weiser, the man turned in to the police by Dear Abby columnist Jeanne Phillips after he wrote her describing his sexual feelings for little girls, she declared erroneously, "Suddenly a man who never touched a child was looking down the barrel of a life prison sentence." Actually, as Chung explained later, what Weiser faced -- and got -- was eight years' probation and a year of electronic surveillance after he pleaded guilty to possessing child porn. Then, at the end of the segment, Chung wondered whether Phillips did the right thing by turning him in, or whether she had violated pervert-columnist privilege.

Maybe it's all the pedophile stories, but Connie seems to be having trouble focusing. When she is not sleepwalking through her interviews, her sudden enthusiasms seem misplaced. Introducing yet another tale of personal terror, she exclaims, "Tomorrow, you must see this story! It's a horrifying story!"

A horrifying story calls for a bombastic voice-over announcer, and CNN has gone with the ubiquitous voice of alarm that spices up many morning talk shows. (I seem to recognize the voice from "The View," though I am loath to compare that show with "Connie Chung Tonight," as it is consistently cannier and more relevant, even when presenting the new JC Penney fashions.) It's a voice so exalted with alarm that it's in constant danger of adding a touch of humor to stories intended to be serious or at least shocking.

An example: The voice intones, "Up next, should you step on a scale before you step on a plane? Overweight fliers, caught in the balance. When 'Connie Chung Tonight' continues," as the camera trains on -- do I have to say it? -- a montage of big-butt-on-the-street shots.

After a while, you cannot help but wonder: Is this perhaps not Connie Chung, but Connie Povich we are looking at? I'm referring not just to the choice of topics, but the kind-yet-wise-yet-blithely-aloof host persona that is so ubiquitous on daytime TV. As Chung interviews overweight fliers who are suing Southwest Airlines for forcing them to buy additional seats on the plane, the woman, recalling the humiliation, starts to cry and Connie calls out to her staff several times for a tissue. Next, she brings on "someone on the other side of the story," a man who sued Delta after having been forced to share his seat with roughly half of a very large row-mate. The man explains that he filed the suit against the airline "on a contract theory that I did not get what I paid for: namely, a seat."

"Mr. Schaeffer," Connie replies, as if suddenly awakened from her nap, "obviously you have a big problem with people who are overweight."

Mr. Schaeffer's jaw drops. He begins to explain that he is talking about corporate responsibility, and that he applauds Connie's overweight guests for taking action against Southwest. Chung is too busy readying herself for another flying leap off the deep end to listen. "Why are you filing a lawsuit and making, as some people would say, a mountain out of a molehill?" An unfortunate choice, as some people would say, of cliché, given the topic at hand. But even this gaffe pales in comparison to the incongruity of the graphic placed directly beneath Connie's guests, which reads, "Flying While Fat." It's a wonder they didn't go with something more tasteful, like "Blubber on Board" or "On a Wing and a Lard Butt."

Not to say that Chung is not her very own, slightly disconcerting person, but the Povich moments are many and memorable. During her debut story on the Arizona wildfire, for example, Chung gently nudged into tears a mother who had been separated from her children. "It must be so difficult to be without your boys," she said. The mother confirmed this but remained composed. So Chung wondered what it felt like to lose cherished, irreplaceable objects, such as one's children's baby books. When the woman began to weep openly, Chung moved in with one of her signature homespun consolations. "Oh! But you do have your family!" she said smiling. "And that's a blessing." You half expected her to hand the woman a casserole.

Of course, Connie Povich would never laugh in disbelief if a guest claimed to have relatives who live in trailer parks. Nor would she repeatedly challenge this assertion, on the unspoken grounds that, because he is a fellow television professional, this couldn't possibly be true. This is what happened when guest Anderson Cooper went on to talk about Anna Nicole Smith's upcoming reality show and said something about his trailer-park family. He insisted he wasn't kidding, and in the end the question remained unanswered.

This sort of thing has already become a hallmark of "Connie Chung Tonight": When she is not stunning her guests with bizarre queries, cutting them off or apparently ignoring them, she implies stuff. Weird stuff. Like, speaking with a Milwaukee detective whose job it is to pose as a 13-year-old girl in chat rooms in order to lure potential pedophiles: "I have to believe that your wife and children ... I don't know ... think it's strange that you're sitting at your computer at night, posing as a child ... And you do the same on weekends!"

The embarrassments of Chung's first week on the air were widely ascribed to first-week jitters. Now a few weeks old, however, the show doesn't seem to be calming down any. On Monday, Phil Donahue's debut show beat her in the ratings by 300,000 viewers, according to USA Today. The paper also reported that Chung lost 8,000 viewers from her average last week. Both shows are famously going up against "The O'Reilly Factor," which is up by 300,000 since last week.

But all this could change, as it looks as though "Connie Chung Tonight" is well on its way to becoming CNN's first breakout comedy hit. In fact, first-night guest Jon Stewart nailed it when, at the beginning of their now infamous chat, he thanked her with what appears to be sibyl-like foresight. "It's an honor to be here," Stewart said, "especially following arson and pedophilia." Chung, sadly, has not proven to be nearly as astute. Not only was Stewart's name misspelled in the graphic that identified him (not her fault), but Chung failed to grasp an Xbox reference, misinterpreted a remark he made about Sept. 11 and asked him, without a hint of irony, whether he'd been approached to replace Dan Rather or Peter Jennings.

"Are you serious?" Stewart asked, amazed.

"You're very good at anchoring," she purred. "I'm telling you, you really are. You do it very well."

OK, maybe she'd never seen his show. Or maybe she had, and there was some wistfulness there, a melancholy dollop of "if only I could say the same for me" longing. Who can say. Maybe -- not that I'm implying weird things about her -- the explanation can be found buried deep in another of Chung's gnomic exclamations:

"I don't drink beer that often. I drink hard liquor!"