Harrison Ford and Liam Neeson face off in a gripping and complex yarn about the 1961 nuclear accident aboard a Soviet sub that could have ignited World War III. 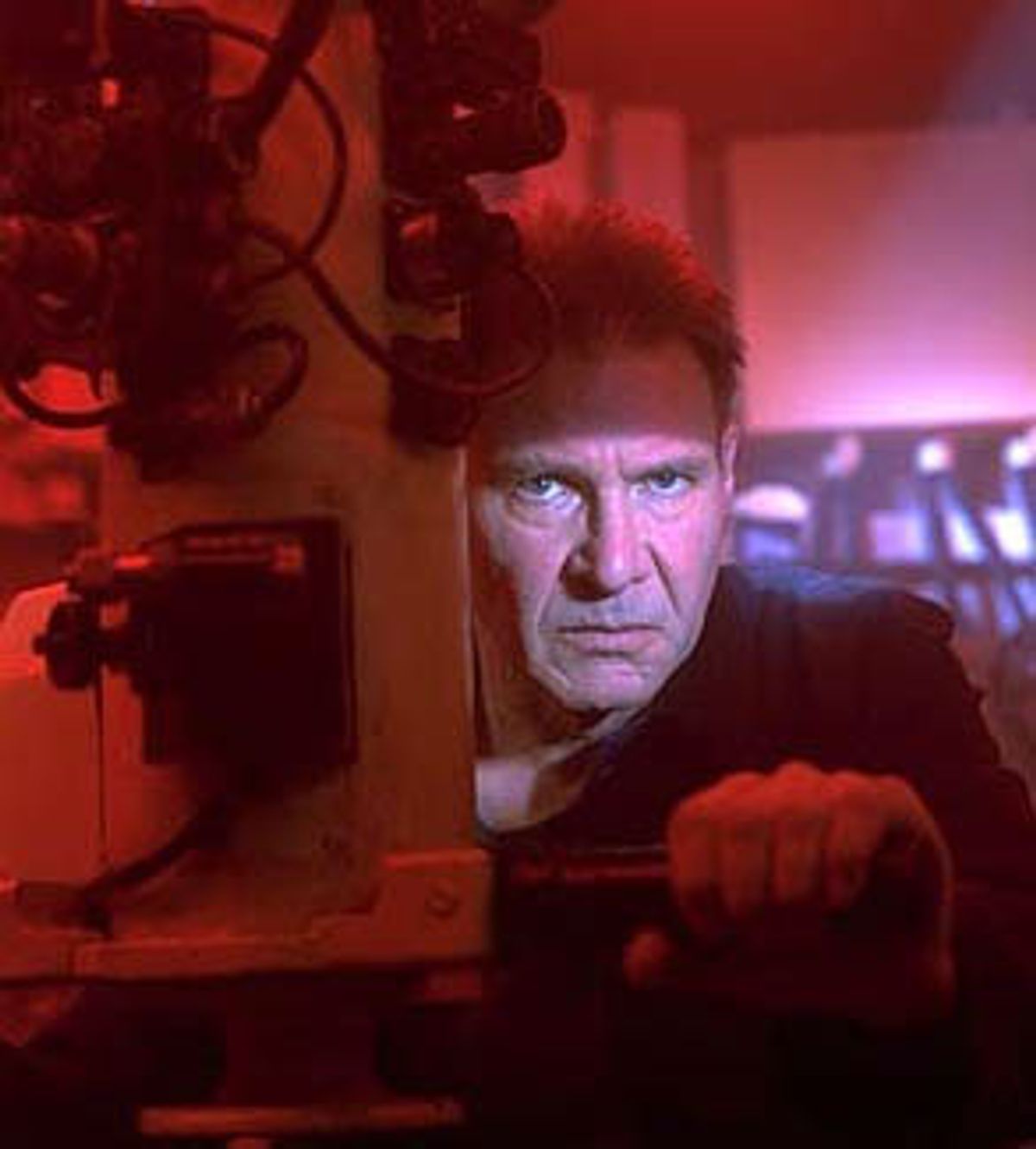 When you go see "K-19: The Widowmaker," Kathryn Bigelow's gripping account of the 1961 nuclear accident aboard a Soviet submarine that nearly launched World War III, bring a sweater. First of all, it's midsummer and the proprietor of your local multiplex probably has the air conditioning cranked up too high. Second of all, you're about to spend two and a half hours in a steel tube beneath the freezing Arctic seas, trapped between a leaking nuclear reactor, an autocratic captain and the paranoid Communist Party bureaucracy, convinced you'll never see the Motherland again.

OK, you won't really. It's an illusion. But it's one hell of an illusion. "K-19: The Widowmaker" may be a bit too grim and claustrophobic to become a certifiable summer blockbuster, but it's a pulse-pounding thriller that brings one of the Cold War's darkest and deadliest episodes to the big screen. In place of the overblown histrionics of most summer movies, "K-19" offers a vivid, highly realistic yarn of real-life heroism, the story of a small group of isolated and terrified men who risked death to save the world from apocalypse.

Like so many military movies, "K-19" is about a conflict between two strong personalities, but it has no villains as such. With its mesmerizing scenes of the great sub diving to a human-crushing depth of 300 meters, or surfacing through the Arctic ice cap, it's also a tribute to the marvels of large-scale machinery, so impressive when it works and so devastating when it doesn't. On one hand, this joins Wolfgang Petersen's "Das Boot" at the top of a very short list of the best submarine movies ever made. On the other, it's also a clever and subtle work, not a war film or an anti-war film but a non-war film that's designed to humanize and complicate viewers' understanding of Cold War propaganda and the nature of bravery.

"K-19" is also an old-fashioned Hollywood movie in the best possible sense of that term, the kind that only a handful of filmmakers -- Steven Spielberg and Steven Soderbergh, say, along with Bigelow's ex-husband, James Cameron -- still have the power and freedom to create. It allows its big stars, Harrison Ford and Liam Neeson (as the captain and first officer of the stricken sub, respectively), to loom above the rest of the picture like dueling colossi, without losing touch with the escalating dramatic tension or the generously handled ensemble around them. For Bigelow herself, one of the most ambitious and intriguing of Hollywood action-film directors (as well as pretty much the only woman working in the genre), it's also a triumphant comeback. Best known for the gritty vampire flick "Near Dark" and the sadistic cop-actioner "Blue Steel," she hasn't released a major-studio picture since the flawed if distinctive "Strange Days" in 1995.

Perhaps only Bigelow would have had the subversive sensibility -- or the sheer balls -- for this project: a Hollywood movie set at the height of the Cold War in which every major character is an officer or sailor in the Soviet Navy. No crewcut-sporting Americans show up to save the day or refocus the audience's attention (in fact, this becomes a plot point in the canny screenplay by Christopher Kyle, from a story by Louis Nowra) and there are essentially no women in the picture. Like Capt. Alexei Vostrikov (Ford), the hardened-steel commander of K-19, we're stuck in that sub with those men, that treacherous early-'60s Soviet technology and absolutely no way out.

Initially it sounds odd to hear Ford, Neeson and the rest of the cast speaking English with "Russian" accents, but the choice is part of Bigelow's overall aesthetic strategy, not just bogus Hollywoodism. For one thing, the cast of "K-19" is intended to simulate the wide range of nationalities and ethnicities found in the Soviet military, and so is drawn from all over the Northern Hemisphere, including the United States and Ireland (in the case of the two stars) and also Russia, Britain and Scandinavia. So having the actors speak a slightly uncomfortable lingua franca is a legitimate decision. More than that, the Slavo-English compels the cast to leave their comfortable 21st-century actor-dude mannerisms behind, drawing them and us materially and psychologically into a different place and time.

Vostrikov, for example, bears little resemblance to any character Harrison Ford has played before, reminding us how good an actor he can be when a director pushes him beyond his customary concerned-American-dad shtick. Vostrikov is every inch a Russian, a military hard man with a philosophical, even fatalistic streak who believes in driving his men -- and his untested, nuke-powered submarine -- to the edge of exhaustion. As the K-19 disaster unfolds, we learn almost nothing about Vostrikov's personal life. According to gossip aboard the boat (all submariners call their craft "boats"), he got his appointment by marrying a Politburo member's niece or daughter, but if it's true she is never mentioned by name. Bigelow gives us just one momentary scene in Vostrikov's quarters, where viewers who know a little music and can make out a little Cyrillic will learn that he's a Beethoven fancier and a Tolstoy reader.

Vostrikov is brought in to command the K-19, the Soviets' first ballistic nuclear submarine, after a dry-dock exercise goes awry under Mikhail Polenin (Neeson), its beloved captain, and the crew begins to believe that the great boat may be cursed. The navy brass, headed by the forbidding Marshal Zelenstov (Joss Ackland) don't want to hear about any problems, and in Vostrikov they've got the right guy. Well before the boat leaves the port city of Murmansk (Halifax, Nova Scotia, is used as a convincing substitute) we know that Vostrikov has his doubts about the mission, but is not a man who believes in complaining or showing weakness.

If the resulting conflict-friendship drama between Vostrikov and Polenin is standard fare in military films, like most of "K-19" it is marvelously executed. Neeson has also rarely been better; an actor of tremendous physical presence and charisma, he nonetheless plays Polenin as a withdrawn man locked in internal combat, torn between his sense that he's the genuine leader of the K-19's crew and his unwavering loyalty to military protocol.

The K-19's officer corps also includes a Communist Party official, who's on hand to show the men propaganda films about the evils of American life: Klan rallies, lynchings, forcible suppression of civil-rights demonstrations, widespread urban and rural poverty. He's a discomfiting comic presence in the film; the professional navy officers around him can barely stand his pompous moralizing, but his arguments about the hypocrisy of Western materialism strike disturbingly close to the mark. (I'm reminded of a contemporary Russian witticism about the post-Soviet era: "At last we understand. Everything they told us about communism was false. And everything they told us about capitalism was true.")

For the Kremlin leadership, the K-19's maiden voyage in the spring and summer of 1961 was a question of survival. In terms of nuclear weapons, the Soviet Union was outgunned 5-to-1 by the U.S., and American nuclear subs were patrolling Russian coastal waters, within easy missile reach of Moscow and Leningrad. Without a credible submarine-based deterrent of their own, the Soviets feared a devastating first strike by the U.S. (and, yes, class, there really were Washington hawks who advocated such a thing). But whatever the level of genuine threat may have been, sending an untested and ill-equipped boat out into the North Atlantic, armed with dangerously unstable weapons of mass destruction, was clearly a reckless decision.

Bigelow and Kyle supply only a little of this background, nor do they attempt to assign blame for what went wrong aboard the K-19 (although Vostrikov, who ultimately became a hero, must carry at least some of the responsibility). The film's only political agenda is to make us see that the crew of the K-19 were following orders, as military men have always done, that they believed they were on the right side of history opposing a great evil and that they displayed incredible courage in the face of grave peril.

Bigelow's measured pacing, her long traveling shots through the body of the sub that gradually convey its social and mechanical geography and her large-scale, heroic compositions are strikingly different from anything you see in contemporary Hollywood movies. I suspect she's trying to channel the grandiose mood and spirit of classic Soviet films her audience has probably never seen, from Eisenstein and Dovzhenko to Aleksandr Askoldov's "Commissar" and Eldor Urazbayev's "Trans-Siberian Express." (No, Blockbuster doesn't carry those, but your nearest big-city public library might.)

There are admittedly moments when Kyle's dialogue creaks and groans as much as the K-19's hull at 300 meters, but most of the film is so exciting you won't much care. Once Vostrikov has brought the boat crashing upward through the ice and successfully launched a test missile, things start to go wrong. A coolant leak develops in the aft nuclear reactor, which is supervised by Vadim (Peter Sarsgaard, in the movie's standout supporting role), a young lieutenant fresh from the academy. With the reactor core overheating uncontrollably -- and backup systems that either don't work or were never installed -- a meltdown is only hours away. If the core melts through its container, the boat's thermonuclear warheads could explode, taking out not just the K-19 but the American destroyer shadowing it a mile away. Quite conceivably, this would be the opening shot of a new world war.

A group of crewmen, among them a sleepy-eyed, handsome sailor named Pavel (Christian Camargo), volunteer to enter the sealed reactor chamber -- wearing nothing but rubber chemical suits -- risking severe radiation exposure to make the difficult repairs. How long can the jury-rigged patch job hold? With its engines crippled and no radio contact with Moscow, will the K-19 crew ever get home? Will they be forced to scuttle their priceless sub or surrender it to the watching Americans? Obviously the world doesn't blow up in the end, but I shouldn't say more in deference to those who don't know the real K-19 story (to which Bigelow and company stick pretty closely).

It would be a grave mistake to view "K-19" as a pro-Soviet film, although in today's frightful cultural climate I'm sure some idiot will make that charge. Much of the brilliance of Bigelow's approach to this material (as in her other films) lies in her appreciation of its ambiguity. As an audience we must acknowledge the brave self-sacrifice of men who believed they were serving the Communist Party and the Soviet state, even though that party and that state had sent them out into the ocean on a poorly insulated pile of smoldering plutonium.

Of course the Hollywood party line is that "K-19" is nothing more than a good story, but Bigelow is a cannier and trickier filmmaker than that. Not only does she not seek black-and-white moral equations, she actively tries to undermine them. Even in this movie's few lighter moments, as when we watch these servants of the Evil Empire joyously playing soccer on the frozen surface of the Arctic Ocean, it remains a fable about the perils of a Manichaean worldview, the danger that dividing the world into implacable camps of friends and foes leads to the annihilation of both. It's just as valuable a lesson as it was 40 years ago -- and just as devilishly difficult to apply to reality.