The rapidly growing demand for wigs, hairpieces and crotch topiary keeps tons of sheared locks moving around the world in an $800 million industry. 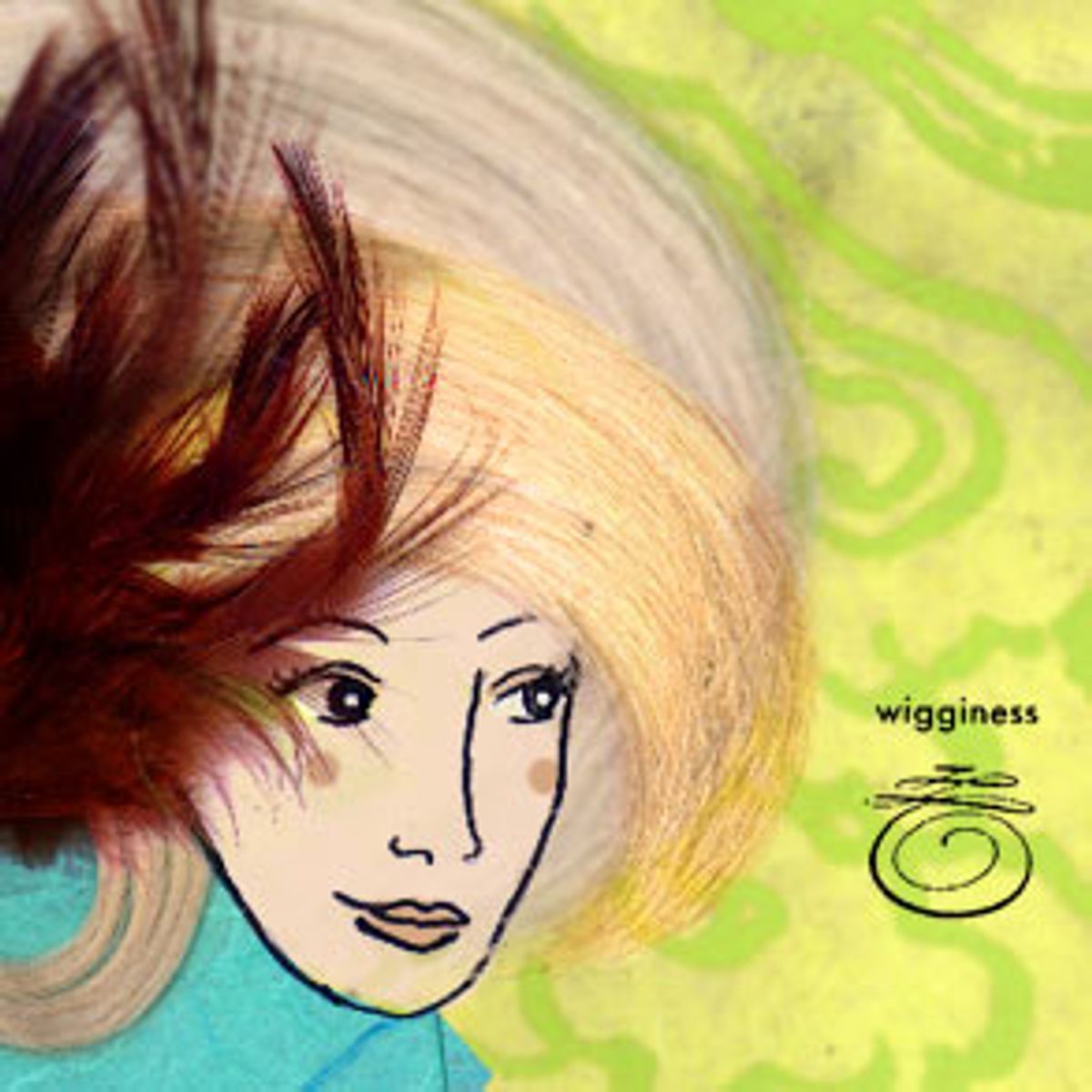 For those unfamiliar with the odd subculture that is the wigs and hairpieces industry it can be downright surreal. Imagine warehouses filled with thousands of lopped-off ponytails resting silently in Tupperware bins; people selling hunks of hair on eBay ("ponytails -- just as they were when gliding against the backs of the girls who shed them"); and the pièce de résistance: pubic wigs -- crotch topiary, if you will -- fashioned out of yak hair and dyed to look like flames, bull's-eyes or corporate logos.

Moving hair from one head (or wherever) to another may seem kind of creepy -- like clipping someone else's fingernails and wearing them as your own -- but the buying and selling of hair for wigs and hairpieces is a roaring industry. Each year, tons of hair gets transferred between heads through vast networks of hair brokers, suppliers and manufacturers. And as sure as a pair of shoes made in Milan connotes a status different from that of a pair made in Taiwan, the origin of hair follows the same pecking order. Walk into any wig shop and you'll hear it in the cooing talk about "the finest European-quality hair."

"European hair is definitely considered the best," says Isaac Davidson, a wig designer in New York City who buys human hair to make wigs for private clients as well as for Broadway shows. "It's called European, but what it means is that it's from someone with baby-fine hair," he says. "It could come from Minnesota or anywhere, as long as it's really soft and fine." Davidson says that a high-quality hand-tied wig -- meaning that every strand (about 150,000 of them) has been manually knotted with something that looks like a shrunken crochet hook -- can fetch more than $10,000 if the hair is all "European."

Following decades of receding sales, the industry is now on the upswing. Wigs and hairpieces are not quite as ubiquitous as they were in the glory years of the 1960s -- when it was estimated that one-third of all the women in the United States and Britain owned one -- but according to Michael Kleinman, executive vice president of Celebrity Signatures International, one of the leading wig and hairpiece companies in the U.S., retail sales throughout the industry are expected to top out at $750-$800 million this year, up from $500 million last year. Kleinman's company alone expects to leap to $150 million in retail sales this year from $30 million last year. "It's not like people wear wigs like they wear shoes, but we're at the beginning of the arc," he says.

The majority of wigs are made with synthetic hair, which has become much more realistic than it was in the 1960s, when it resembled the visible hair plugs on a doll's head more than a woman's natural hair. But despite the believability of synthetic hair, human hair wigs still carry the same whiff of opulence -- much like leather vs. pleather. "Synthetic shines too much," says Davidson, who considers fake hair fine for extensions but prefers crafting his wigs out of human hair. "You can spot [fake hair] a mile away."

Real or not, wig wearers swear by the ability of acquired hair to transform one's self-image. "Putting on a wig is a really powerful thing," says Kennedy, a one-name wig maker, stylist and blond-wigged drag queen at Glama-Rama in San Francisco. "It gives some form of incognito and anonymity and mystery to people. It's zero to hero, like that" -- he snaps his fingers-- "in seconds." Says Abby Cohan, a self-proclaimed wig addict, "It brings out your alter ego. Or at least one of them." Cohan is a platinum blonde with red streaks framing her face until she yanks the wig off and reveals the real thing, a much more conservative light brown wavy mass gathered at the nape of her neck. "You get to be whoever it is for that moment that goes along with the wig you're wearing," Cohan says. "When you put a wig on, you become like a whole new person."

Once you understand that tons and tons of hair is being shorn from the heads on which it grew, and is then shipped around the globe, you naturally start to wonder where it all comes from. But since no international organization tracks how much or what kind of hair is shuffled around each year, tracing its origins can be tougher than combing out tangles after a ride in a convertible.

The overwhelming majority of human hair is collected in Asia, principally China, India and Indonesia. Most wig makers agree that the softer Indian hair is preferable in texture and appearance. But even that hair is heavily manhandled to give it a more Western look: It's dipped in acid to remove the outer cuticles -- which lie slightly open like the shingles of palm tree bark -- then dyed, permed and processed before being sealed into wig bases.

Indian hair, the hair cognoscenti will tell you, comes in part from the thousands of Indians who have their heads shorn as a rite of tonsure -- a religious offering. At the Lord Venkateswara Temple in Tirupati, as many as 25,000 pilgrims offer their hair to the Lord of the Seven Hills every day. Some 500 barbers are stationed at the temple regularly, and up to a hundred more show up during special religious events to give worshippers a close buzz. "The priests, not being idiots, have a hair broker at the back door," says Greg Taylor, who started working at his father's toupee business south of San Francisco when he was 7 and now makes hairpieces for medical patients.

Many countries -- Russia, Italy, Estonia -- have long-standing histories of peddling their citizens' severed locks. And while the supply of hair from Western European countries has dried up in recent decades, Russia continues to be a stronghold of hair exportation. According to the U.K.'s Sunday Express, Russians were exporting several tons of hair every month back in 2000. Some of it landed atop Posh Spice when she had 20-inch strands of Russian hair extensions woven into her own for one of her trend-setting do's.

Around the world, hair is regularly collected through temples, governments or salons, then processed and sold to companies that make wigs. "This has been going on for, who knows, however long people have been wearing wigs," says Steve Mirizzi, of Giovanni and Sons, a hair supplier in Los Angeles. "And selling hair will be around as long as humans are."

Accounts of hair's ability to fascinate and compel date back to the biblical story of Samson's vanishing strength when Delilah clipped his flowing Fabio-esque mane. Early Egyptian paintings depict pharaohs and queens exchanging balls of hair as tokens of love; hair was later fashioned into bracelets during Victorian times; and locks have always been snipped and given to loved ones.

Hair's power to arouse strong feelings carries over to the sexual realm; hence the abundance of Web sites devoted to hirsute fetishes such as hairy backs, women with buzz cuts, or those sporting a look that is, ahem, quite the opposite of a Brazilian bikini wax. Wendy Cooper, author of "Hair: Sex, Society, Symbolism," suggests that hair and sexuality are linked because the sprouting of body hair coincides with the first stirrings of randiness and sexual awakening.

But hairpieces are not exclusively about creating dramatic or sexy personas. For many, it's about recreating old ones that may have been lost. Cancer patients and sufferers of alopecia areata -- an autoimmune skin disease that can result in complete body baldness -- say that having at least the illusion of sprouting hair is essential to acceptance in our image-conscious society. "Chemo patients are sometimes really angry about hair loss, sometimes even more so than [about] their cancer," says Taylor, whose customers are primarily cancer and alopecia areata patients. "It adds a visual insult to [being ill]. Here you are, you're fighting for your life, and goddamn it, then your hair falls out and you have to wear a crappy wig."

Taylor's company works with the nonprofit group Locks of Love, a Florida-based organization that provides as many as 200 custom-fitted hairpieces each year to children suffering from medical hair loss. The hair stays on by a vacuum seal, which, executive director Jennifer Cox says, allows kids without hair to do "normal" things like hang upside down on monkey bars, participate in gymnastics, and romp around on playgrounds without fear of the wig sliding off.

The hair crafted into a Locks of Love hairpiece comes from donated ponytails, all sent to the organization in Ziploc bags. Cox says the organization receives about 18,000 ponytails a week, mostly from teenage girls. It takes 10 to 12 ponytails to make one hair prosthetic, as they're referred to in the medical community. For Taylor's part, he's thrilled to not have to rely on hair brokers for a steady supply of hair. He and others admit that they've been duped in the past, buying hair they believed was top European quality, only to find out that "it turns into an indoor-outdoor carpet."

Inside Taylor's warehouse south of San Francisco, ponytails of all colors and textures smoosh together lifelessly in translucent plastic containers, awaiting the painstaking sorting and sifting required for each hairpiece. As Taylor picks up a limp honey-color cord of disembodied hair, he reflects on a lifetime spent providing new hair to the full range of humanity: "The bottom line is that we're all always getting judged by how we look, and if this is something that makes people feel better about themselves, then there will be a business for it."

For those looking for further inspiration to test the transforming power of wigs or hairpieces, take it from Glama-Rama's Kennedy, who regularly witnesses the wonderment that washes over the face of a first-time wig wearer: "It puts a Jedi mind trick on how everyone sees you, including yourself."

Kelly Wilkinson is a freelance writer in San Francisco.