Speaking of tongues (and other body parts)

Steve Almond's daring collection of short stories about sex, "My Life in Heavy Metal," brings a fresh and vivid eye to a clich 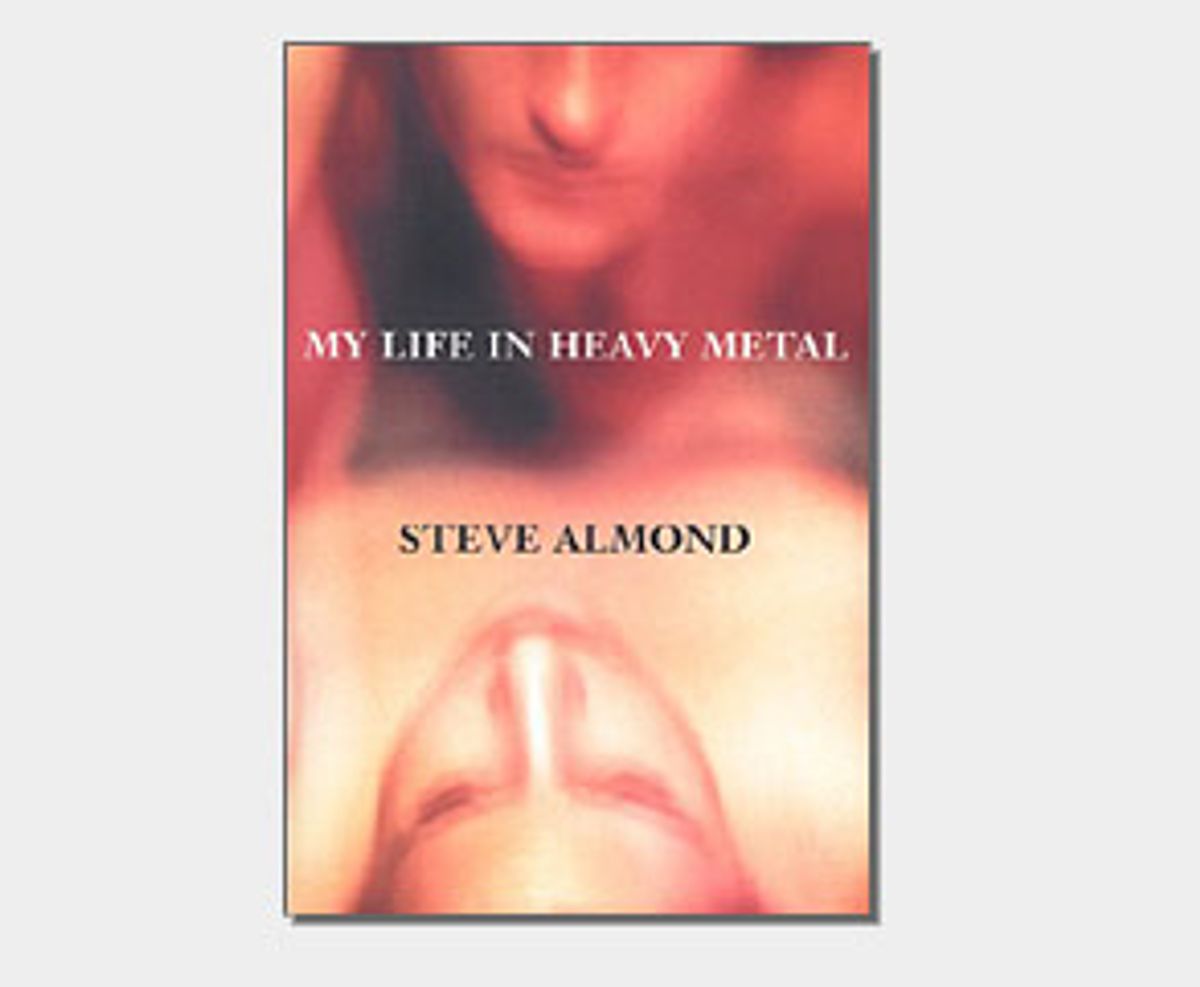 Writing about sex is like writing about food. How many ways can you say the fruit was ripe and juicy?

But every once in a while somebody comes up with the ability to describe the mechanics, the emotions, the raw energy of sex in such a way that you get a soaring -- and sometimes searing -- experience of it.

Steve Almond is the latest somebody. The Boston College teacher's collection of short stories, "My Life in Heavy Metal," will leave you gasping, gulping and guffawing from beginning to end. Each of the 12 stories has sex as the destination, the vehicle or the journey.

The beauty of the book isn't just that he managed to write about sex in a daring, fresh and provocative way, but that he writes it within every conceivable context. Some of Almond's most enjoyable descriptions are of tongues, and where they are put; here he is describing a session with a plain-Jane lifeguard:

"We moved to the couch, where we leaned and leaned and finally fell against one another sloppily. I slid my chin down her belly ... when her knees slipped behind my head they clamped me so hard my bottom row of teeth bit into the underside of my tongue. I could taste my own blood and this mixed with the slightly acrid taste of her. Gradually, her legs sagged to the bed. Her pelvis vaulted into the air. I followed her up, pressed harder and suddenly there was a warm liquid coming out of her, a great gout of something sheeting across my cheeks, down my chin, splashing onto the comforter.

"I figured, at first, she had urinated. But there was simply too much fluid coming out of her. By the time Claudia had regained her wits, and lowered herself to the bed, the puddle on my comforter was two feet across ... My second theory was that, as a lifeguard, pool water had somehow accumulated inside her and been released when her internal muscles relaxed, but the liquid was as tasteless and odorless as rain.

"And you know what? I was goddamn thrilled. It was such a freakish thing she'd done. Claudia, this quiet little mermaid, with her spectacles and her lisp, with her dull brown eyes, who never so much as touched herself so far as I could tell, had not only surrendered her body to me but expelled, spumed, ejaculated some mysterious orgasmic juice all over my face. I felt like doing a victory lap around the puddle."

The tongue-lashings continue in "How to Love a Republican," the story of how a leftie fell for a rightie. This is Almond at his subversive best -- managing to inject not just his tongue into his obsession but also his politics:

"What Darcy enjoyed most was a good lathering between the thighs. As a lifelong liberal, this was one of my specialties. In some obscure but plausible fashion, I viewed the general neglect of the region as a bedrock of conservatism. The female sex was, in political terms, the equivalent of the inner city: a dark and mysterious zone, vilified by the powerful, derided as incapable of self-improvement, entrenched and smelly. Going down on a woman was a dirty business, humiliating, potentially infectious, best delegated to the sensitivos of the Left.

"I relished the act, which I considered to be what Joe Lieberman would have termed, in his phlegmy rabbinical tone, a mitzvah. It required certain sacrifices. The deprivation of oxygen, to begin with. A certain ridiculousness of posture; cramping in the lower extremities ...

"One evening, as we lay flushed on gin, she announced that she had a surprise for me and rose up on her haunches and slipped off her panties and knelt back. All that remained of her pubic hair was a single delicate stripe.

"I felt touched to the point of tears. Here was this miraculous creature, tuckered beyond words, right here in my apartment on the eve of the election, flashing me her vaginal mohawk. She vamped gamely even as her eyelids drooped, and licked her lovely incisor and urged me forward. How could it matter that she opposed gun control?"

Not all the women in Almond's stories are purely interested in having their men go down under. Take Basha in his story "Run Away, My Pale Love":

"Basha wanted nothing to do with clitoral stimulation, tricky positioning, languorous gazes. Put it in, was her agenda. Let the flesh speak. Her face went rubbery. She took on the aspect of a madwoman plucked from one of Hogarth's Bedlam prints, ready to tear her hair, throw shit, which pleased me, as did her internal muscles, which yielded in rings of contraction ..."

When they are done, Almond's character surveys Basha on his bed and thinks, "Her body looked like something tossed ashore."

Ling in "The Body in Extremis" is a perfect example:

"Her features were broad and sort of gummy. Her nose looked like a lump of clay that had been flattened by someone's thumb." Or this: "Her lips were fat but nicely shaped. They sat on her face like rain-puffed blossoms." And: "Her nipples budded out from a chest that was nearly flat. They were keenly sensitive, and slightly larger at the tip than the base, like Frankenstein's bolts."

But my favorite metaphor occurs in a story called "Valentino." Here's how a senior in high school refers to a schoolmate who's saving herself for the right guy: "The whole time she's waiting, see, she's getting more and more lathered up. She's like a bottle of Dom Perignon that's been shaken for months, right? So when she finally gets popped -- kaboom."

Almond's characters range from adolescents to seniors, but the truth about sex never seems to change no matter what generation's voice he speaks with. In his story "Valentino," one of the characters, Holden, does an unforgettable (if a bit Salingeresque) rant on the tyranny of beauty, its lottery-like fraternity:

"You can't get out of your depth aesthetically. You do that and you're done for ... All men and women are divided along aesthetic lines, see. That's just the way it is. There's maybe twenty, twenty-two such strata. At the top you've got the movie stars and models, okay? Tom Cruise and that skinny bitch he's married to, all those fuckers. Then the soap stars and TV anchors. Then commercial actors, then actual nontelevised attractive people, down to the average, sort of ugly and at the bottom the real sad cases, cleft palates and the like ...

"The trick here is that every person recognizes intuitively where they belong on the beauty gradient. This is the first thing you gauge when you walk into a room. Right? It's like: 'Okay, better than him, worse than him, way better than him.' That's how people know who they're supposed to end up with."

When Holden's friend points out the success of a young woman in the middle of the "beauty gradient" hitting on a guy at the top of it, Holden points out that the guy is drunk and the most the woman will get is a one-nighter with him: "He's got a few beers in him ... Beer can blur the picture, but it can't repaint the lines."

Ouch! The truth hurts, babe, as one of Almond's characters might say. And hurt his characters do. Despite the pyrotechnical writing about bedroom gymnastics, each of Almond's stories is suffused with love invited and denied, betrayal inflicted or endured, tenderness given or withheld, and the whole palette smeared with a charcoal of longing that just makes you ache.