Go to London and look at Lucian's paintings of nudes, which still contain the possibility of love. 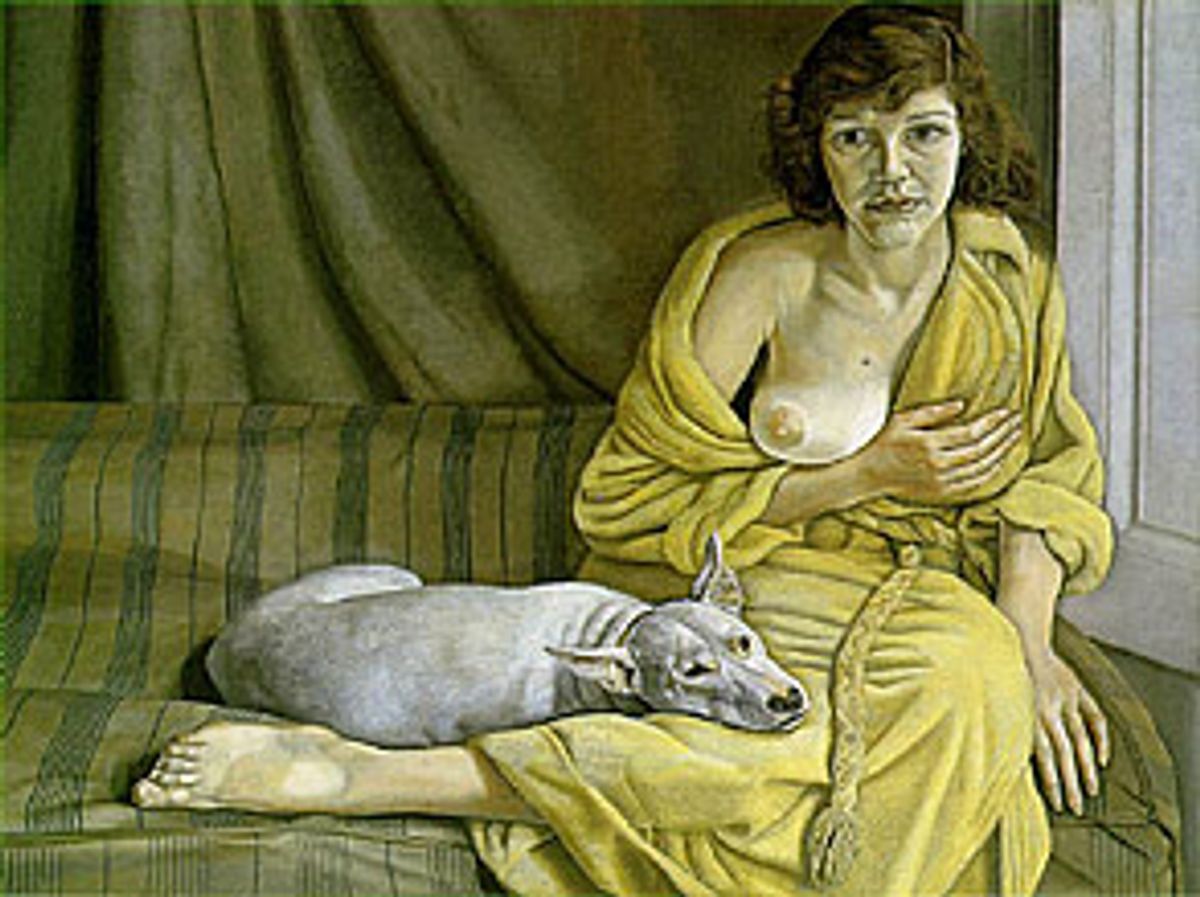 Lucian Freud is the son of Ernst Freud, the youngest son of Sigmund -- that Freud. Lucian was born in Berlin in 1922, Jewish of course, and so when he was only 11 he and his parents moved to London to escape the Nazis.

Lucian became a British citizen in 1939, and he has been a reclusive figure in the London art world ever since the end of the Second World War. Now, as he turns 80, he is the subject of an immense and very moving retrospective at the Tate Gallery in London.

That's right -- go to London, allow yourself a couple of days at the Tate, take your time, survey the several rooms and the path of his life first before you begin to wrestle with his intimidating pictures. And don't be overawed or unduly guided by the fact that he is a Freud. Not at first anyway. For this Freud may be the greatest living painter -- and he is, quite plainly, one of the visionaries of the body, of flesh, of the mind behind it, and how we need both to see the body yet disregard it.

Freud has an eye and a feeling for old people, overweight people, people exhausted by life, the kind of people we might be embarrassed to look at if we glimpsed them in a hospital waiting room. The flesh he paints seems battered, beaten up nearly; and it is that livid pale skin -- London skin -- that gets too little sun, and too much pulpy, comforting food. These are not bodies you want to fantasize over. They are corpses caught at an early stage.

Yet that's too gloomy. The retrospective goes back to his youth when he had a yearning for mysterious young women, with almond-shaped eyes. These are not nudes, but close-up faces, floating in a mirror or a dream, and many of them are his first wife, Caroline Blackwood, one of the great seductresses of modern times (her life is told in Nancy Schoenberger's book "Dangerous Muse"). For Freud, these are hauntingly romantic pictures, as tender as they are hopeful, though touched with the warning instinct that this woman is as much witch as nymph.

It was not really until the '60s that Freud discovered, or overcame his reticence for, the nude -- I suspect he was influenced in this by his friendship with Francis Bacon. But Bacon's nudes are invariably trapped or imprisoned; they are decomposed or howling at the sense of permanent torture. By contrast, Freud's figures are passive, prone, stretched out on broken sofas in bare suburban rooms. They seem asleep sometimes (I think Freud has reached a point of not wanting to paint eyes too much), or on the point of waking from some disturbing dream. These people are invariably overweight -- like most of us -- unlovely, which is not the same as unloved.

And here we come to the most important and affecting thing in Freud. In the age of photography and movies, nudity -- or the subject of the nude -- has become impossibly overlaid with the armor of fantasy. Such figures are eroticized by being looked at -- the pose, the voyeuristic angle, the expression on the face (dreaming of being dreamed about), the perfection of the bodies. In other words, the nude has no purpose save for the invocation of sex. It has come close to losing the possibility of love.

That is a terrible handicap. For the nude can be spiritual, it can be the revelation of a secret, sad self hidden by the sacking called clothes, and it can make decent, honorable and true that nearly universal state that is being unlovely, unsexy (yet desperate for love and sex). Like most of us. But being plain and pale and gross and as helpless as a landed fish does not mean we are not loved. From time to time, at least, we are. Yet in modern movie times it has become hard sometimes to believe that anyone as plain, fleshy and forlorn as us can be loved. That it can happen is, simply, because love has only so much to do with physical attractiveness. What makes Freud such a visionary is that he has rediscovered the blind faith we can muster in feeling for bodies that Vogue and Vanity Fair might flinch from.

Once upon a time, people went to Vienna to see the grandfather -- to have their souls saved. You can go to London.