Across Central Africa, mining and oil facilities are becoming flash points for a fight between international corporations and local residents. 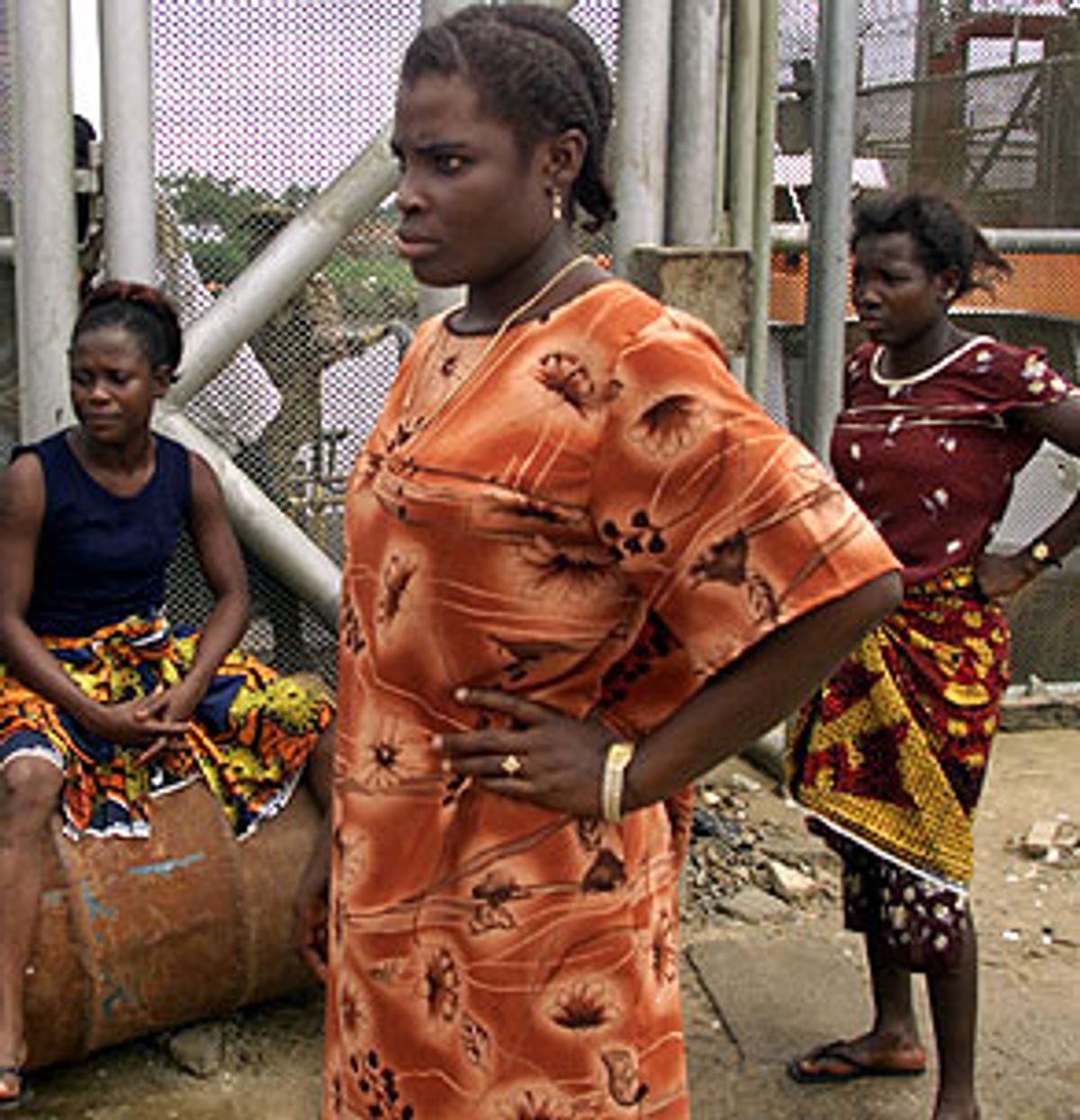 Frank Mutua is exhausted, and nearly broke. For four years, the 43-year-old Kenyan businessman has fought a proposal by a Canadian firm to build a strip mine that would wipe out his coastal home village. The struggle has taken its toll. While Mutua spent every day in court for four months, his safari business, which once took well-heeled Western tourists around Kenya's pristine Indian Ocean beaches, collapsed. Having spent $20,000 on logistics and legal fees, he finds his personal finances are in ruins. Still, Mutua is resolved to carry on. "I grew up here," he says. "This is our land."

It's easy to see why Mutua is so attached to his native Kwale, a tranquil community about 40 miles south of the bustling port city of Mombasa. This is where his farmer father, drawn by fabulously fertile land, settled in 1968, and this is where Mutua, who is married with three children, now runs four small farms of his own. Thatched-roof houses are nestled in between coconut and citrus fruit plantations. Mangos are so abundant the farmers sometimes cannot pick them off the trees fast enough. The river that runs through the village is stocked with tilapia fish.

But the greatest riches may be those that lie underground. According to Tiomin Resources, the Toronto-based mining firm, there are 150 million tons of sand here containing rutile, ilmenite and zircon, the minerals used to make titanium. The Kenyan coast may in fact hold more than 10 percent of the world's reserves of titanium, which is used to provide pigmentation in paint, as well as in the manufacture of metal for everything from airplanes to golf clubs. Tiomin is building a $137 million mine in Kwale to extract the titanium over the next 14 years.

Conventional economic wisdom holds that such foreign investment is essential to the revival of battered African economies. Tiomin claims its mine will inject $20 million a year into the local economy and create 200 new jobs. The project, company officials say, will bring new improvements in schools, healthcare and other infrastructure, plus a stream of new tax revenues. "It will revitalize the economy of the Kenyan coast," says Colin Forbes, the manager of Tiomin's Kenyan division.

But if the recent record of other foreign projects in Africa is anything to go by, Mutua and his neighbors have good reason to be suspicious. The vast majority of foreign investment in Africa goes into oil, mining and other extractive industries. While the profits usually flow to shareholders and corrupt government officials, ordinary Africans usually get little or nothing in return and the environment that sustains them is often damaged or destroyed.

Now, however, some Africans who feel betrayed by the promise that development will bring improved standards of living have begun to fight back. Battles pitting local communities against foreign corporations are arising with increasing frequency around the continent.

Roughly 2,500 miles west of Kwale, in the oil-rich Nigerian Delta, hundreds of unarmed women made headlines earlier this month when they seized a ChevronTexaco export terminal and four pipeline stations, demanding jobs for their husbands, water and electricity systems and other improvements. Though the Delta exports $20 billion a year in oil, people there are among the poorest in the world.

A speedboat ride through the maze of rivers reveals the staggering poverty of the Nigerian Delta and confirms extensive environmental destruction there. After night falls, boats must navigate by the glow of powerful gas flares. Situated next to oil installations, village after village along the rivers lie in total darkness. Most people have no electricity. In fact, they have hardly much of anything. There are no schools, no medical facilities and no telephones.

Kidnappings of oil workers by armed youth gangs are so common in the delta that oil companies simply view the crime as part of doing business in Nigeria. But never before had unarmed women taken up the protest. "The discovery of oil in our communities has brought misery and sorrow," protester Mary Olaye told reporters. "Our rivers are polluted and fishes dead because of the poisons being spilled into the environment."

So desperate were the women to have their demands met that they threatened to strip naked before company officials, an African tradition meant to inflict great shame on one's opponents. But the protest produced a tentative victory for the women: In a potentially historic agreement, Chevron last week agreed to provide jobs, schools and medical facilities and to upgrade water and electricity systems. It will also provide loans to help the women start businesses.

Other conflicts have not ended so productively. In Tanzania, local miners of the tanzanite gemstone have clashed repeatedly in the past two years with a South African mining company, AFGEM, which obtained a mining license in 1999. The violet-hued gem is only found beneath a four-mile patch of scrub land near Mt. Kilimanjaro, and local miners accuse the company of trying to drive them out of business.

Hundreds of miners have on several occasions attacked the AFGEM mine. A 17-year-old miner was shot dead last year, though AFGEM denies killing the youth. The company's chief executive officer, Mike Nunn, narrowly survived an assassination attempt in November 2000.

In Kwale, too, people fear that losing control of the land means losing control of their destiny. Mutua makes a sweeping gesture over the lush land where his mother and sister are buried. "All this is going to go," he says. "Once Tiomin starts mining, there will be nothing left. They don't care about the environment. They only care about money and the profits they are going to make."

If its project wins final approval, Tiomin plans to relocate the local residents -- about 4,500 people on 450 farms -- before it begins operating. The company offered around $110 per acre in resettlement compensation, plus an annual rent of $24 per acre. This was rejected by many residents, who complained the compensation was far below market value.

Tiomin has now turned the resettlement question over to the corruption-plagued Kenyan government. But Kenya's land ownership system is in shambles. Most of the farmers don't even own title deeds, though they have lived on the land for generations. Tiomin refuses to pay what it calls "squatters," farmers with no title deeds, any compensation at all. "I have nowhere to go," says 62-year-old Juma Suleiman, who has three wives and 14 children, but no title deed to his farm. "I will not leave this land. They will have to kill me first."

Activists charge that Tiomin's mining operations will irreparably damage the local environment. The construction of a shipping port at Shimoni, near one of Kenya's two marine parks, could upset the sensitive ecosystems there, they contend. Tiomin's plan to extract water for its operations from a local river may threaten the water supply to a nearby forest that is home to a unique blend of flora and fauna. Another major concern is the disposal of radioactive waste, a byproduct of titanium production. The International Fund for Animal Welfare has urged Tiomin to post a substantial bond to guarantee it will do no damage to the environment.

But Tiomin seems to have won Round 1 in the battle. Earlier this month, it announced that an environmental license from the Kenyan government, which in effect certifies the proposed mine as environmentally sound, had been approved. Critics say the decision ignored environmental concerns raised by independent studies, and some even questioned the permit's existence. When asked to produce the government letter of approval, Forbes, the Tiomin manager, declined. Several telephone calls to the National Environment Management Authority, which issues the permits, went unanswered.

The controversy surrounding the permit has fueled a charge that Tiomin is evasive and secretive. "They're acting dodgy, very dodgy," says Elizabeth Wamba of the International Fund for the Welfare of Animals. "I don't think they would do this in Canada or any other developed country."

Africa was the only region that did not experience a downturn in foreign investment last year. Still, Africa only received a meager $11 billion out of $1.3 trillion dollars in foreign investments worldwide, with up to 90 percent of it going into oil and mining projects that can offer big corporate returns but do little to build an infrastructure to encourage further economic growth. (The United States now gets 15 percent of its oil from Africa.)

Economists lament the dearth of what they call "value-added" investments in Africa. Tiomin, for example, plans to ship the raw materials from its mine out of Kenya and have the titanium processed abroad. That kind of business leaves African communities without jobs and scrambling to at least get multinationals to build schools or hospitals. "In the case of extractive industries, foreign investment has not brought the expected effects of greater social services, wealth and development," says Arvind Ganesan, director of the business and human rights program at Human Rights Watch.

It's different for African governments -- or, more precisely, powerful individuals within the government. Corruption is rampant in many African nations, and top government officials can demand millions of dollars in kickbacks from foreign companies eager to do business in their countries. What's good for the government is not always good for the people. "The money ... from foreign investments just goes straight to the central government," says John Mshimba, coordinator of the Coast Rights Forum in Kenya. "We never see any of it."

Global Witness, a London-based human rights organization, is spearheading a campaign called "Publish What You Pay," which calls on oil, gas and mining companies to publish taxes, royalties and fees they pay to governments. "We want transnational companies to reveal the same basic information in the developing world about net payments to a state that they already routinely disclose in the developed world," says Gavin Hayman of Global Witness. "In the absence of any knowledge of state income from such sources, it's easy to embezzle the natural capital in extractive resources."

In Angola, where oil revenue is estimated to comprise about 90 percent of the state's $3 billion-plus budget, all information about oil receipts is kept confidential. According to Global Witness, more than $1 billion "went missing" from the government coffers every year for the last five years. At the same time, Angola has the second-highest infant mortality rate in the world, and the United Nations is relied upon to provide about $200 million a year to feed the country's 1 million internally displaced people.

There are, of course, African governments that operate cleanly. Botswana's $2 billion per year diamond business is considered transparent and accountable. Botswana's 16 million people enjoy the highest per capita spending on education in the world, and free medical facilities. Fair elections have been held every five years for the past 34 years since independence.

Mshimba wishes his government espoused the same priorities. He sees the business of casinos on Native American reservations in the United States as a model for how local communities can benefit directly from outside investments. "The people there get a commission and they can spend the money however they want," he says. "We just want our fair share."

Frank Mutua, meanwhile, says he is spending most of his days at home, in front of the computer. "Maybe I'll try to get a degree online," he says. "This battle with Tiomin has ruined me. But I can't stop now. I'll never give up. If we can't win this battle with peaceful means, maybe there will be a time when we have to think of some other way of fighting."

Stefan Lovgren is a freelance writer based in Kenya.