I come to bury IAmCarbonatedMilk.com, not to praise it

From BuyClamsOnline.com to billromanowskisucks.com, a stroll through the graveyard of defunct domain names offers a melancholy vision of really dumb hopes that were cruelly dashed. 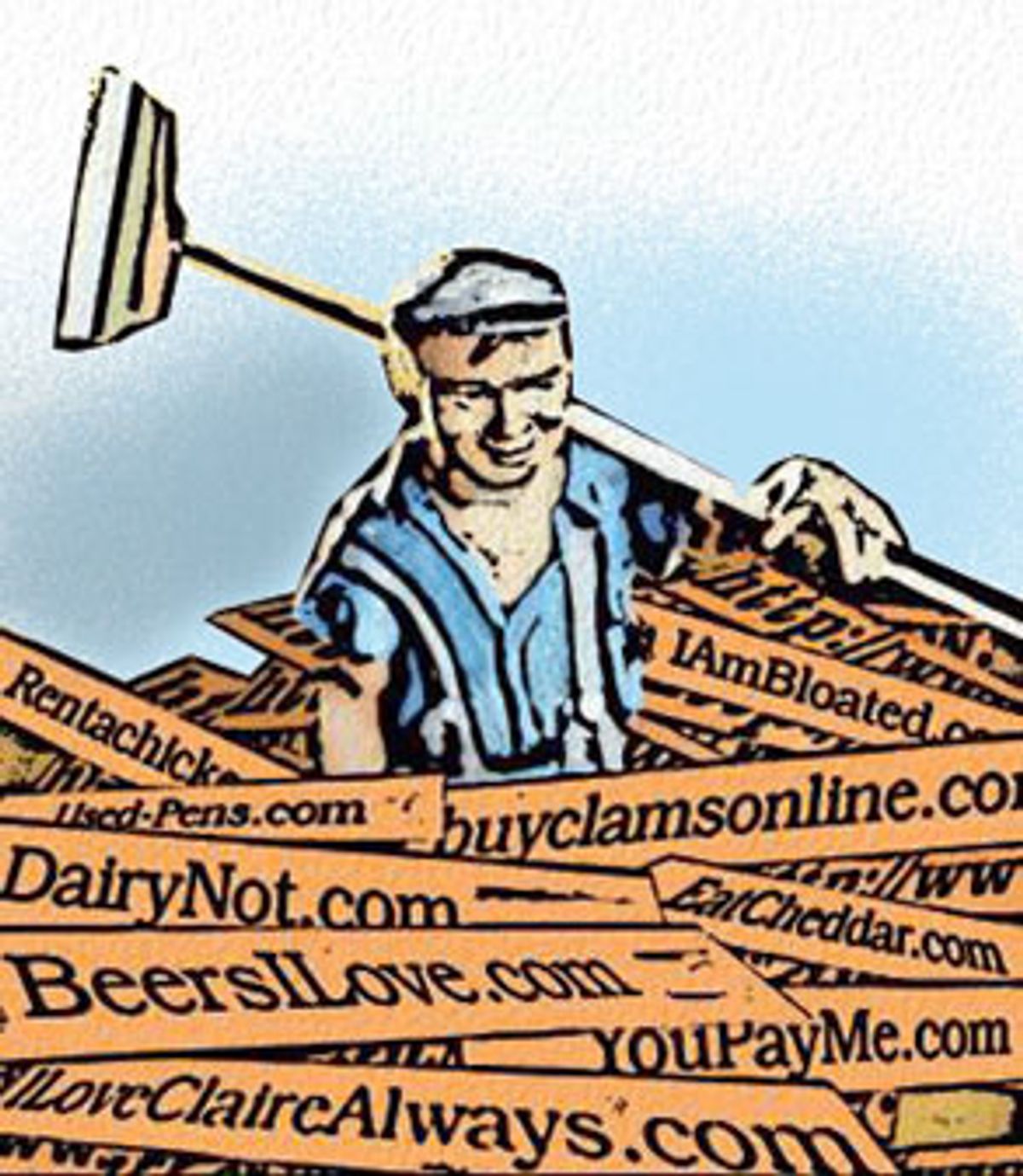 It's late afternoon, you're thinking about dinner, and you realize it's been a long while since you enjoyed some shellfish. Do you (a) head to the seafood section of your supermarket and ask the clerk how fresh the clams are or (b) sign on to BuyClamsOnline.com?

I'm going to go out on a limb and guess that you chose Curtain No. 1. Fact is, you'd have to; the Web site BuyClamsOnline.com doesn't exist -- never did, so far as I can tell -- and the domain name expired on April 12. But the very fact that BuyClamsOnline.com has expired means that someone, maybe a year ago, maybe two, registered it. Someone out there, someone living among us, chose to bet that the road to online success would be paved with mollusks.

The now-lapsed state of BuyClamsOnline.com is not unusual. Indeed, nearly half of all URLs registered will expire, a turnover rate that itself has sparked the registration of domains and development of sites focused solely on the selling of lapsed URLs. At DeletedDomains.com, you can search for free through a constantly updated pool of more than fifteen million newly available domain names. Fifteen million. Assuming annual registration fees between $15 and $30 these days, that amounts to something in the range of $225 million to $450 million ponied up by individuals and businesses for what turned out, in hindsight, to be inspirations that would remain dormant.

I understand the temptation. I've registered domains myself. I know that, though ultimately unexpressed, each expired URL represents a discrete idea deemed good, or at least good enough, at the point of inception to justify its registration fee. However short the ultimate lifespan -- from inspiration to registration to research to realization and then, finally, to the decision to let it lapse, to take it off the hook and throw it back -- each URL offers a snapshot of a mind at work at a particular moment in time.

At the core, someone who registers a domain name probably has one of two ambitions -- to make money (buy this thing from me now!) or to make a point (listen to me now!). From there, all hell breaks loose. Sifting through this virtual detritus uncovers every human emotion -- infatuation and disillusion, rage and grief, greed and fear, intolerance and acceptance. There are foolhardy business ideas, unbalanced opinions, political jabs, angry rants, and lunatic suppositions. There is religious fervor and sports zealotry. There are purposeful misspellings and racial slurs. Read through thousands and both the commonality and the originality are striking. The human desire to explore and express is alive -- marvelously flawed though it may be at times.

At the height of the dot-com boom, the promise of Internet riches was so pervasive that otherwise rational people got caught in the frenzy, grabbing domain names with little consideration for the niggling details of the business beneath -- details such as potential market, competition, and branding. Can there be any other explanation for HugsAndHeartstrings.com?

We can see now that predictions of vast hordes emptying their wallets online were slightly overzealous. In truth, even spotty profitability was too optimistic for many of these ill-conceived businesses, and some were doomed from the get-go. Certain problems were ingrained in the very choice of domain name. Was Edwardswine.com registered by a vintner or a pig farmer? What service was going to be offered at Thepenismightier.com?

Here's an evaluation you don't need an MBA to appreciate: How many ceiling hooks does the average home need in a given year, and how often are those hooks replaced? Martha Stewart may skew the final results, but in my home, the answers are "none" and "never," respectively. A thorough evaluation would also consider ceiling-hook market segmentation (highly fragmented) and profit margin (low), but the upshot is this: Whoever paid $50 to register CeilingHooks.com could have earned a better return in a simple savings account.

That's not to say that niche markets can't be very profitable -- but they are not without drawbacks. There's niche, and then there's too niche; take, for example, OldCarsForSaleInFloridaOnly.com. Others that could be catalogued under "irrational market-size exuberance": AZWindshields.com, Used-Pens.com, BeverageMix.com, ItalianMilk.com, and German-Bread.com. Imagine all the potential ad campaigns. For RussianFertilizer.com: "When Estonian won't do." DogPsychologyCenter.com: "Manic terriers a specialty!" HispanicDentist.com: "Don't trust those pearly whites to a white guy." That any of the above might have been intended as a fan site raises a host of other questions.

A number of folks were certain that the path to online wealth was littered with free stuff. I like free stuff as much as anyone else, though I'm not sure I've ever had room in my life for an extra sink (FreeSinks.com) or roof (FreeRoofTile.com). I have been known to eat pancakes (FreePancakes.com), use paper towels (FreePaperTowels.com) and paper clips (FreePaperClips.com) and, at certain times of the year, hang ornaments (FreeOrnaments.com), yet I don't imagine I would have felt the need to frequent any of those sites had they ever been built. The oxymoronic Free-Bills.com just confuses me, and FreeMistakes.com sounds as though it would offer something I already manage quite well on my own.

Betting on the missteps of your audience is another common tactic in choosing URLs. While Christmas.com is a holiday portal, so too might have been Chrisymas.com, Curistmas.com, and Chrostmas.com -- all bent on capturing the Christian misspeller market at holiday time. In that same spirit, people paid to register UsedFurnature.com, Free-Litterature.com, FreeBaloons.com, LoveHapens.com, MarryAMillionair.com, and DianaPrincessOfWhales.com.

Just because a site isn't pitching goods or services doesn't mean it ought to be taking up cyberspace. Maybe everyone's got at least one good idea knocking around the old brain. And most everyone holds at least one strong opinion -- which sometimes surely led to the registration of a domain name. A Web site around a strong opinion, however, is not necessarily that person's one good idea. Just how much more could be said at I-Love-Cake-Candles.com?

Others intended to make going online a religious experience (SupremeOne.com, GoCatholics.com, IslamicGamesRUs.com) or a dating experience (EgoMate.com, FindMyTrueLove.com), or both (MissZoroastrian.com, MrJewish.com, MrChristian.com). Some had biting political sites in mind (RevJessesLoveChild.com, AlGoreThiefOfState.com). A few seem to have registered the name of the band they planned to front, assuming they learned to play the guitar (BigamousPygmies.com, BarefootedFriar.com, JurassicPimp.com). And there are others for which it's a stretch even to hazard a guess. MyPetFishLikesToastedKiwis.com, IAmCarbonatedMilk.com -- typing tests, in-jokes, or neo-dada experiments?

Then there are the romantics. A love letter is romantic, a private gesture from one besotted person to another. A love e-mail? Though entire relationships have been founded on sentiments passed desktop to desktop, "love e-mail" lacks the endearing alliteration of its hard-copy cousin. Now consider a love site. Beyond the overarching theme of eternal love for Claire (which someone ostensibly revealed in the very act of registering ILoveClaireAlways.com), what would such a site look like? Were there to be poems about Claire? Pictures of Claire? Did Claire know about this? Did Claire even love you back?

The fact that these domains were left fallow is even more intriguing than the fact that they were registered to begin with. Did the person who bought ILoveTracyVeryMuch.com realize that he (or she) actually loved Tracy only moderately? Were the designs for ChrisLovesSally.com and ChrisLovesAmanda.com scrapped after that day Sally and Amanda ran in to each other and compared notes? Both Alan and Branden announced their love for Amy (BrandenLovesAmy.com, AlanLovesAmy.com), but neither pulled the trigger and built a Web site to back up his claim. Maybe that's why Pat snagged her (AmyAndPat.com), except that site wasn't built either. Are they still together? Did the relationship expire before the domain name did, or did Chip and Danna (of ChipandDanna.com) decide that their time together would be better spent at the gym? And what about Nick and Tonya? Both NickLovesTonya.com and TonyaLovesNick.com were released earlier this year. Is either URL still an accurate description of the couple's emotional state, or would it be more fitting, these days, to publish NickLostInterestInTonya.com and TonyaHatesTheWayNickChews.com?

A number of people hit on the dim idea for online engagement site. Imagine how you might have responded to an e-mail that requested a visit to WannaMarryMe.com or WouldYouMarryMeOnline.com. With all pretense of surprise spoiled at the sight of the URL, I think I'd have been tempted to write back, "Check out my answer at No.com."

We all learn that love doesn't necessarily last forever (even Janelle's beloved, who registered ILoveJanelleForever.com only to set it adrift). And the sorrow and resentment that can result from disaffection often seeks a podium of its own. Such emotion may well have lead to IDislikeRob.com, GordonIsAMoron.com, IHateAdamOliver.com, and HeatherThompsonIsABigDork.com (though the last sounds more like it was registered by Heather's little sister). Though MeganAndAndreaAreLesbians.com may have been intended as a virtual coming-out party, it sounds more like a bulletin board for disgruntled ex-boyfriends. Think that's harsh? For all-out fury -- spent perhaps in the very act of URL registration -- it's hard to beat IHateAndrewSalkeldTheFatUglyGreasyStarTrekLovingWanker.com. If she really wanted to drive the point home, the owner of that inspired URL should have doled out free e-mail addresses to all of her friends (Heather@IHateAndrewSalkeldTheFatUglyGreasyStarTrekLovingWanker.com, for example). It takes a while to type, but talk about your viral marketing.

Why were so many domains registered then left unused? Why weren't the sites ever built? Perhaps, after that initial "Eureka!" moment, the cyber-novelty waned. Registration alone gets you little aside from bragging rights and a charge to your credit card. Without something tactile in hand, some people probably forgot they even owned a URL. Or, after titling their domain (AllAboutColleen.com, for example, or MyDogRocky.com), they realized that there wasn't much news to report. Or that they didn't want to let the public into their kingdom after all. Others may have been daunted to find that their one-of-a-kind, can't-believe-no-one-else-has-thought-of-this innovation was under construction elsewhere -- by Microsoft or Procter & Gamble or another well-heeled competitor. And countless, surely, just never made it to step two, "Build Wb site" remaining uncrossed off the weekly to-do list, somewhere below "Dust" in priority.

After a URL lapses, all that remains is a listing in an "expired domains" database, and that for only a few months, before it is purged from the great Internic registry, as if it never existed. But maybe owning the URL, albeit temporarily, was enough. Even before the site is built, a domain name can provide an image, a statement, an insult, a compliment, a joke, a wish, a confession, a meeting ground, and a sales pitch. Why these domain names were registered, what they intended to reveal, remain hidden within their lapsed anonymity. But the lost URLs themselves say what I suspected all along: YouCantHandleTheTruth.com, YouCantStopMe.com, YouDontWantToKnow.com, YouHaveNoIdea.com, YoudBeSurprised.com. It could all be true. Just one last question though, for the person who registered I-Love-You-Heather.com. Was it me? Did I do something wrong? How could you let that go?

Heather Cochran is a writer living in Los Angeles. She does not own www.heathercochran.com.