The former Democratic standard-bearers say they're still good friends. But Gore sends a message: If you don't want to get scorched, get out of the way of my fire-breathing populism. 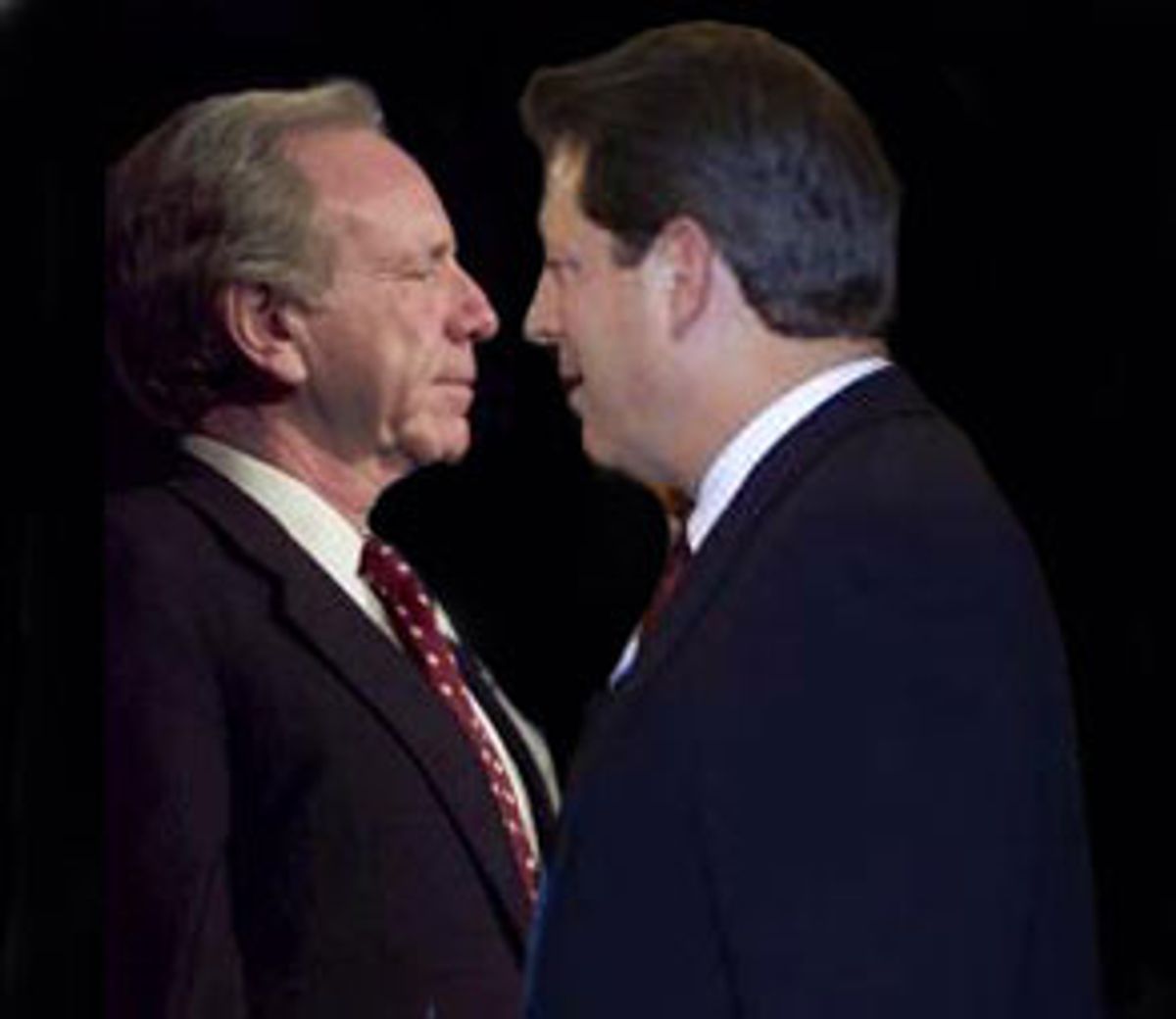 On July 8, Al and Tipper Gore welcomed their old friends Joe and Hadassah Lieberman to dinner at the Gores' Arlington, Va., home. Lieberman spokesman Dan Gerstein says, "It was a very friendly evening, very nonpolitical," though "briefly toward the end" of the evening, the subject turned to the 2004 presidential race. Gore told Lieberman he was still undecided about whether he would run.

In the month since, the exchange between the former Democratic presidential and vice presidential nominees has grown a lot less cordial. Lieberman criticized Gore's "people vs. the powerful" campaign message at a meeting of the Democratic Leadership Council in New York last week, saying, "That kind of rhetoric which suggests class conflict" cost the campaign support from "middle-class people who don't see America as the people vs. the powerful." He also opened the door to a possible presidential run in 2004, even if Gore runs again, if the Democratic field strayed too far from business-friendly positions.

After the speech, according to sources close to Gore, Lieberman contacted his former ticket mate to downplay his remarks. But on Sunday, Gore responded with an opinion piece in the New York Times [registraton required] that appeared to take on Lieberman directly, arguing that "Standing up for 'the people, not the powerful' was the right choice in 2000."

If the exchange could be considered a sparring match between the two -- and both Gore and Lieberman aides insist it was not -- by Monday, there appeared to be a sort of détente.

Lieberman, in an appearance on Fox News Sunday, sought to "clarify" the statements he made earlier in the week at the DLC powwow where he told reporters Gore's rhetoric "made it more difficult for us to gain the support of the middle class, independent voters who don't see America as 'us vs. them.'"

"My concern about the so-called people vs. the powerful theme in 2000 was that is was too subject to misunderstanding and not representative either of the extraordinary prosperity that had occurred under Clinton and Gore," Lieberman said. "I guess I would have added a word or two and said that we believe in a government that will stand up and fight for the people, for the public interest against powerful, private interests, including business, if they treat the public unfairly."

Gore seemed to respond directly to Lieberman in his Times piece, defending his populist message as "the Democratic Party's meaning and mission."

"The suggestion from some in our party that we should no longer speak that truth, especially at a time like this, strikes me as bad politics and, worse, wrong in principle," he wrote.

A source close to Lieberman says the senator agreed with what Gore wrote. "The problem is, when you say the 'people vs. the powerful,' you often don't have a 1,000-word New York Times Op-Ed to explain it and elaborate on what you mean, and that's the point Lieberman made," the source said.

Gerstein agreed. "He wasn't criticizing Gore or the campaign they ran," Gerstein said. "He was just critiquing a piece of the message which he thought was vague and subject to misinterpretation and could turn off certain swing voters."

Lieberman had criticized campaign messages before. What was different, Gore aides point out, is that in the past, it was the campaign Lieberman was criticizing. In New York, he criticized Gore specifically.

"He went 5 percent farther than he had before, but he has essentially said the same exact thing several times," Gerstein said. "I think honestly that was just a reflection of the fact that he was surrounded by 20 of the top most aggressive political reporters in the country pressing him with follow-up after follow-up."

Gore sources say Lieberman "did reach out to Gore afterward, privately. I don't think it was an apology, but I think Lieberman feels he made a comment that got blown out of proportion." Lieberman sources could not confirm the senator had called his former running mate after the DLC gathering.

Gerstein pointed out that the two have had their differences in the past. "Sometimes there's an honest difference of opinion, even among ticket mates," he said, and pointed out how the two differed on school vouchers (Lieberman supported, Gore opposed) and Lieberman's harsh criticism of Bill Clinton during the Monica Lewinsky scandal, while Gore called Clinton "one of our greatest presidents."

Nonetheless, with both men, at the least, contenders for the Democratic candidacy in 2004, there was more than just a philosophical debate at issue. The former partners are now possible rivals. And by Monday, the Gore camp, at least, seemed content with how their man had performed.

"I think it was a pretty effective offense," said a source close to Gore of the Op-Ed. "People begin to focus on this dynamic between Joe and Al, but the point here is the message. The real point of Gore's argument was: Going forward, [people vs. the powerful] is the most effective argument against Bush. If he has to bump into a couple of his fellow Democrats along the way to deliver that message, so be it."