When the NFL's Ultimate Fans get together in Canton, Ohio, they paint the town red -- and then they start on their bodies. 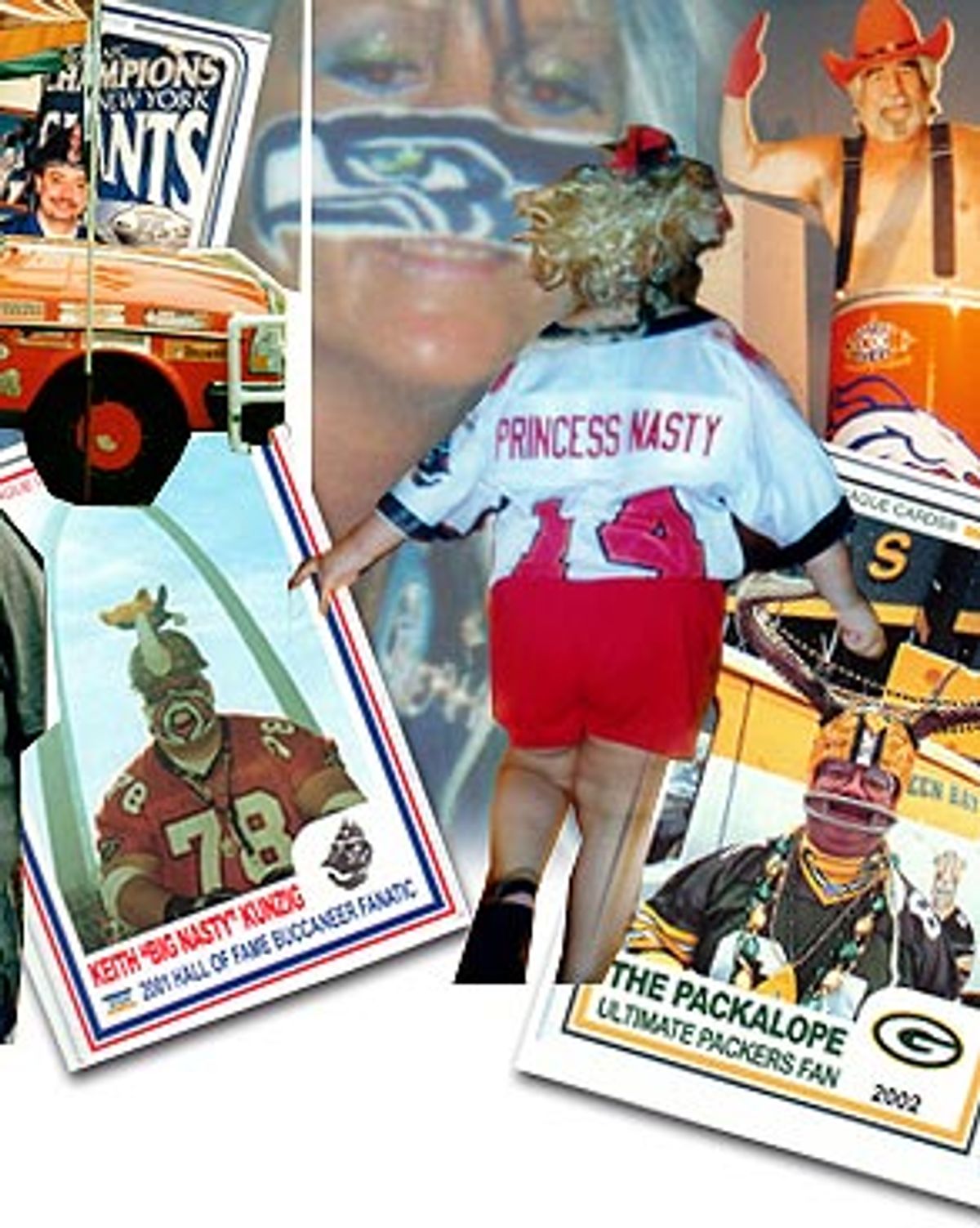 "It's a year-round thing," says Penny Kennedy to the group assembled at banquet tables. "I don't have a job. It's what I do. I support the Titans."

She is dressed in costume as Queen Titan, with a crown and a blue and red cape. This is not a confession, and the gathering is not a 12-step program. If Queen Titan is not exactly bragging, she is at least happily describing her life and the supreme place of the Tennessee Titans in it, and if the people she's describing it to are not exactly envious, they at least understand just where she's coming from. They, too, live for their teams.

In this room are people named Captain Dee-Fense, the Pillow Lady, the Packalope (and his wife, Mrs. Lope), Pantherman, the Spiking Viking, Barrel Man, Birdman, Arrow Man and Big Dawg. Many of them are high-functioning adults and solid citizens. All of them are bone-deep crazy about a professional football team.

The gathering is the enshrinement ceremony for the 2002 class of the Visa Ultimate Fans. The credit card company and the NFL Hall of Fame run a contest each year to choose the Ultimate Fan of each team, who is given an on-field ceremony at a home game and enshrinement in a little corner of the Hall of Fame on the same weekend when the year's class of players and coaches is also inducted. You may have seen Jim Kelly, Dan Hampton, Dave Casper, John Stallworth and the late George Allen's son, Sen. George Allen, R-Va., giving their televised acceptance speeches in Canton's football stadium Saturday. ESPN didn't cover the speeches of the Ultimate Fans.

"I'd like to thank Visa for not taking my credit card away," said Ross Warner, a lifelong New York resident and lifelong San Diego Chargers fan, who said that over the years "I've traveled to a lot of games that I had no fiscal business going to." He also thanked the Oakland Raiders, "because who among us has not had a 4-12 season where that one win over them made it all worthwhile?"

"This is the biggest thing that ever happened to me in my life," said Gordon Whaley, who has missed exactly four Atlanta Falcons home games in the team's 36 seasons, all of them because of his own surgeries, and who asked the team if he could have his ashes spread on the field when he dies, "so maybe the Falcons could win some games in mysterious ways."

"I'd like to thank my mom for letting me be myself," said Patrick Olsen, the Spiking Viking, a young man with a purple and gold mohawk and an abiding affection for Minnesota's team. "She let me be myself and this is what happened."

This is the fourth year of the Ultimate Fan promotion, and some alumni have joined the current class to fill every room of a Comfort Inn in nearby Dover for the weekend. There are a couple of dinners, tickets to the parade in downtown Canton on enshrinement morning and the enshrinement ceremony itself (the players' enshrinement, that is), and a big tailgate party that dovetails into an event with the United Way at which a few dozen local kids show up, play games and get football-related goodies and autographs -- of the fully costumed and painted Ultimate Fans.

The Fans have organized themselves into a nonprofit group, Professional Football's Ultimate Fan's Association, an effort spearheaded, so to speak, by Arrow Man, the original Ultimate Fan of the Kansas City Chiefs, real name Monte Short, famous in his neck of the woods for wearing a jersey of the opposing team pierced with Chiefs arrows.

The group's mission statement, "To promote the fellowship of all fans, encourage sportsmanship and support charitable activities," is sufficiently vague to leave plenty of room for debate over the association's real purpose. For now it seems to exist to provide enough cohesion to have a good party on Hall of Fame weekend, a noble goal. But the event with the United Way, an official NFL charity, is designed in large part to impress the league, at least according to the Bone Lady, a Cleveland Browns devotee whose costume is an orange dress decorated with dog biscuits and the words "Bone It" across her chest and changing messages ("Playoffs," "Steelers Suck") on her butt, and whose car, the "Bone Mobile," is an orange Volvo wagon festooned and filled with Browns-related stickers, artwork and merchandise and topped with a giant bone. (Maybe this is why these people have trading cards. It takes a lot to describe them, and a photo helps.)

"This event is so important for us as a group because it gives us the instant credibility, the link with the NFL, that we need," she tells her fellow Fans at a Friday night dinner. It's not clear to this reporter why the group needs credibility or a link with the NFL, and this reporter decides not to pursue the subject because there is a hospitality room at the Comfort Inn, and if there is no official link between the Ultimate Fans and certain large Midwestern breweries, there ought to be.

Some Fans, Fan family members and Fan hangers-on, like me, are loud-talking over beers and mudslides in the hospitality room on Saturday night. "You know how at every party there's that one loud guy going 'Woohoo!'" says my friend Maryanne Dersch, the 2001 Ultimate St. Louis Rams Fan and my entree into the world of face-paint devotion. "This group is all that guy."

Actually, I find that there are two main types of Ultimate Fans, though it's possible for any one Fan to straddle both groups. The first type is the devotee to the team. He or she lives and dies with the home 11's on-field fortunes, loves the players, knows the history, cares about X's and O's. Some of these folks are not the loud guy at the party.

The other is the persona. The important thing to these folks seems to be their character, their brand, if you will. Though they're no less devoted to their team than the straight-up devotees, they're often so busy being their character on game day -- "Woohoo!" -- that they see little or none of the actual game. Some of them have agents and make personal appearances. Some of them even have been immortalized as custom toy figures, including man-mountain Tampa Bay Buccaneers fan Keith Kunzig, better known as Big Nasty, and his impossibly cute, ringletted daughter Destiny, who is of course Princess Nasty.

I can't tell you what the percentages are, but I found it striking that in 48 hours of hanging around with this group of Ultimate Fans at a football-related weekend on the eve of the NFL preseason, I didn't participate in or hear a single conversation about football, other than some generic trash talk or crowing of the "we're going to the Super Bowl this year!" variety.

So what to make of these Ultimate Fans? They're a series of contradictions. They're far more emotionally involved with their teams than the average fan, but also far more likely to miss most of the game and to embrace an opponent's fans. At Sunday's enshrinement ceremony, this year's Ultimate Rams fan, Ram Rat Kathy, real name Kathy Lewis, happily shared a table with a fan of not only the cross-state rival Chiefs, but with a fan of the New England Patriots, who broke the Rams' hearts in the most recent Super Bowl. No drinks flew.

They are a group of eccentrics, but they're eccentrics who devote their lives to just about the most mainstream thing in American culture, professional football.

"We're the top, elite, visible bunch, but we represent millions of fans," said Stormin' Norman Silva, the Denver Broncos' 2002 Ultimate Fan in his enshrinement speech. But they don't. Most fans don't paint their faces, create costumes, go to every home game and some road games, build elaborate tailgate setups, devote large portions of their houses to team mementos.

Suzanne Weldon of Ketchum, the public relations agency working the Visa promotion, says the NFL has been cooperative and friendly. But it's clear the league and its teams are so successful they don't need the kind of grass-roots devotion these Fans represent, and the Fans for the most part are not embraced by their teams in return. That's a mistake by the dour, corporate NFL, which critics, including your humble narrator, refer to as the No Fun League, and which could benefit from fewer picayune rules about how players can wear their socks and more loopy fun.

On the night of the Fans' enshrinement, the Washington Redskins pounded the San Francisco 49ers in Japan, a game played at an hour when most American football fans wouldn't watch it in front of a crowd that knew little about what they were seeing. Not much fun, but apparently good for the international marketing effort.

But it also meant that the exhibition season was underway, which means the regular season is right around the corner. I think it's safe to guess the Ultimate Fans' consensus reaction to that: Woohoo!