Jennifer Aniston stars as a bored housewife caught up in chaos and motel-room sex in this hardworking, low-budget indie. 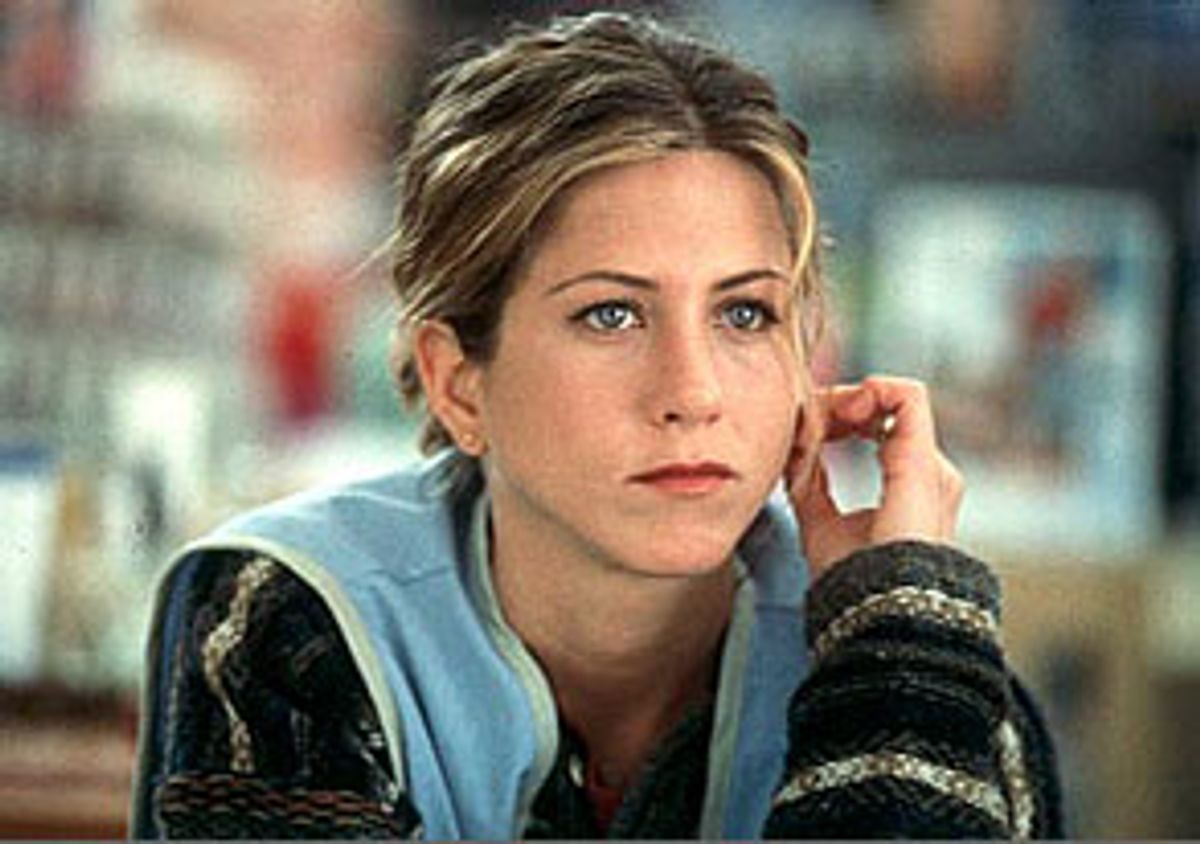 "The Good Girl" is a low-budget, high-integrity indie film whose creators have worked hard to create something memorable. I almost feel like I'm being pissy for not liking it more than I do. It enlists a boatload of fine actors to play against Jennifer Aniston's marvelous performance as a bored and frustrated Texas woman battling an early midlife crisis. (Aniston, in an unlikely but encouraging turn of events, seems to be parlaying sitcom stardom into a serious and unpredictable film-acting career.)

Director Miguel Arteta and writer Mike White -- the team who brought us the digital-video subculture smash "Chuck & Buck" -- seem to be taking their best shot at the seriocomic but ultimately earnest vein you might call Cheerios realism, which has lately produced such movies as "In the Bedroom" and "You Can Count on Me." Maybe that's the problem; "The Good Girl" feels like a composite of several other slightly more assured indies of recent years. There's a great deal to admire about it, even beyond Aniston, and even when it goes awry it never becomes trivial or cynical. But it also never quite establishes its own identity, and when you remember it in two years it's likely to be that movie you saw that you kind of liked with that girl in it, what's her name, from TV.

Specifically, this is the movie that asks the question: What if Aniston's alienated strip-mall waitron from "Office Space" (Mike Judge's underappreciated 1999 workplace comedy, which has slowly developed a cult following) worked in low-end retail with Jake Gyllenhaal's loony teen from "Donnie Darko"? Mind you, those are two of my favorite American movies of the last few years, and I'd be happy to sit down and watch either of them right now. But even the fact that I'm making the comparison -- that the comparison is pretty much inevitable -- only makes it clearer that Arteta and White's movie, engaging as it is, lacks the originality of those two damaged near-masterworks.

Of course, when Justine (Aniston) lays eyes on Holden (Gyllenhaal) in the dingy, fluorescent establishment known as Retail Rodeo where they're both employed somewhere in downscale Texas suburbia, there isn't much doubt that trouble's going to follow. Both these people have pretty much reached the ends of their respective tethers, one quietly and one noisily. Justine has just turned 30, has no kids and is grievously bored with her marriage to the mildly buffoonish Phil (nicely underplayed by John C. Reilly), a house painter who sits around every night blowing a doobie with his pal Bubba (Tim Blake Nelson) and getting paint on Justine's couch.

Holden's real name, unsurprisingly, is not Holden. He's 22 and has been thrown out of college for boozing. As a special favor to his parents, the Retail Rodeo's manager (a thankless role gracefully handled by John Carroll Lynch) is allowing him to work the cash register under the name of his favorite fictional character. Holden believes that the world does not understand him and that he is blessed with world-historical talent; even Justine, who is no literary scholar, can tell when she reads his stories that this version of reality is itself Holden's great creation.

In their depiction of Justine and her world, Arteta and White are trying to balance savage satire with the grinding tragedy of everyday life; it's a difficult blend at best and it probably wouldn't work at all if they didn't treat their star with such evident affection. Aniston, who has personified a certain vision of pert, smart prettiness on television, here plays a woman who is fraying just a tad around the edges, who wears off-brand jeans and a heart pendant. But Justine is never ridiculous and in fact you can see why the haunted and hooded-eyed Holden becomes convinced that she's his salvation: Even with her slightly outdated frosted hairdo and white sneakers, Justine is as beautiful, as filled with longing, as any princess in any fairy-tale tower.

Gyllenhaal doesn't do quite as well with Holden, who is a complicated and perhaps impossible assignment. On one hand, he's meant to be ridiculous and most certainly is; on the other, we can see how his sleepy intensity turns Justine on. In "Donnie Darko," Gyllenhaal proved that he can command the center of a movie and make us feel tremendous compassion for a character who does nearly unforgivable things. But Holden really isn't all that important in "The Good Girl," for all the screen time he gets. He's a well-acted one-note joke, a phase Justine has to pass through on her way to destinations unknown. At one point -- in a scene Arteta and White may intend as absurd comedy but that falls flat -- she actually tries to poison him by making him eat a pint of tainted roadside blackberries.

In love with the idea that someone could want her so much, rather than with Holden himself, Justine abandons a friend at the hospital, lies monumentally to her husband and neglects her duties at the cosmetics counter for motel-room sex marathons and storeroom quickies with a college dropout. White's governing idea in the screenplay, I think, is that once Justine introduces this element of anarchy into her life, it spreads in all directions with unpredictable consequences. To his credit, he doesn't try to moralize about Justine's sexual infidelity -- although you can't help feeling for hapless, dunderheaded Phil -- and this is a movie that understands the occasional beneficial uses of the flat-out outrageous falsehood.

Two Retail Rodeo employees wind up dead (though not Zooey Deschanel, very amusing in a brief role as Justine's bitchy punk-girl assistant). Phil's redneck partner Bubba, who's terrorized by his own dog, finally reveals his true feelings to Justine. Sperm-count tests yield bewildering results (and any movie that can milk pathos, rather than comedy, from a semen-sample scene gets extra credit). Justine drags Phil to Bible study, in an effort to cleanse her sin and save their marriage, but has to flee in terror when exactly the wrong person shows up.

White's screenplay tries to become simultaneously darker and zanier as it goes along, as if he wanted to write a Coen brothers version of "American Beauty." Eventually Justine has Holden hiding in her car, virtually wearing a fake nose-and-glasses, begging her to go on a "Badlands"-style killing spree-cum-road trip. Arteta's measured, realistic directing style isn't well suited to this farcical combination, and "The Good Girl" winds up feeling like a collection of interesting ingredients that don't come together with any form or substance.

For one thing, I wish White, who was so memorable as the creepy, horny Buck of "Chuck & Buck," had given himself a larger role here than that of Corny, the Jesus-loving security guard who's a target of easy jokes. Beyond the seemingly effortless work of Aniston, who never loses our affection no matter how ludicrous Justine's behavior gets, this outstanding cast labors hard for gradually diminishing returns. And the portrait of down-market Caucasian America in "The Good Girl" -- the America of Retail Rodeo rather than Wal-Mart -- bears a faint but unmistakable tinge of exoticism or nostalgia. Still, I'd rather see a movie this ambitious (even when it's also this flawed and confused) over one that, in the contemporary Hollywood mode, is endlessly satisfied with itself.