Stranger in a strange land

Anna Nicole Smith is a parody of a blond bombshell in a parody of a TV show. Bloated, lonely and pathetic? Yes. The end of civilization? No. 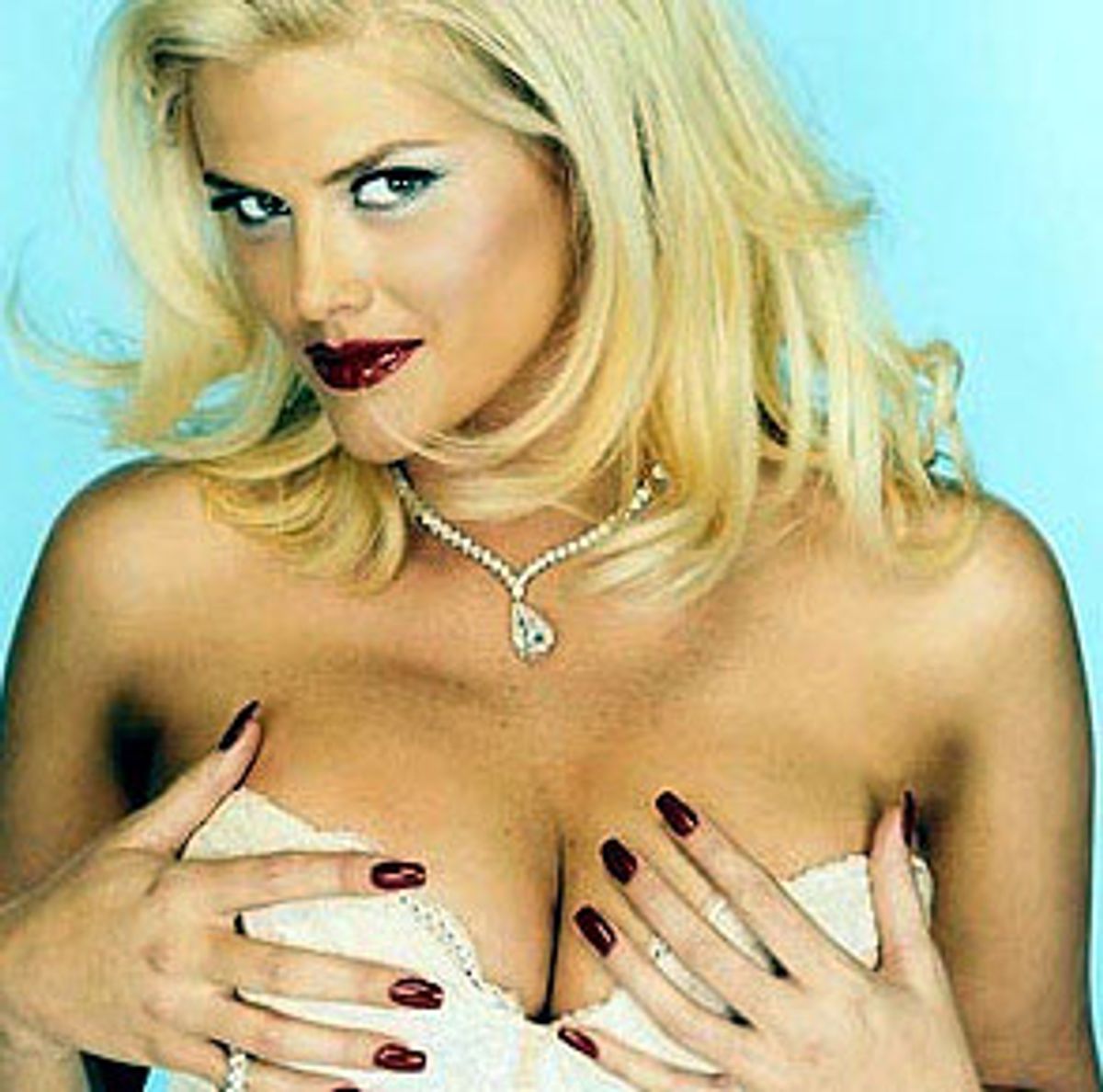 I've been watching the same episode of "The Anna Nicole Show" since it premiered last Sunday night on E!, and reading reviews in which critics huffily point out how trashy, stupid and pathetic it is -- which, obviously, is why it made it on the air. Only four days old, "The Anna Nicole Show" has already been compared to a train wreck (the Hollywood Reporter, the Tampa Tribune, the Christian Science Monitor and the Hartford Courant), a car wreck (the New York Times and the San Francisco Chronicle) and a cruel, exploitative joke. All this indignant disapproval seems oddly misplaced, as if a bunch of cardinals suddenly started taking the pope to task for being Catholic. Nobody expected the Princess of Wales, after all.

Even if we didn't know the mundane details of Anna Nicole's daily life before last Sunday, we could pretty much rough out the general gist. Armed with nothing but a bottle of peroxide, a pair of silicone pouches and a dream, a little girl from nowhere catapults herself from fry cook to Playboy Playmate to Guess? model to trophy wife of octogenarian Texan billionaire to puffy, incoherent object of ridicule. If you caught the "E! True Hollywood Story" that aired before the show's premiere -- or any of the other 49 times it has aired -- you know that after years of legal battles, weight gain and apparent substance abuse, Smith was primed and ready for her own reality show.

As Vladimir Nabokov once said, "There is nothing more exhilarating than philistine vulgarity." If this is true, then "The Anna Nicole Show" is pretty damn exhilarating. The second in what is sure to be a long line of celebrity-based reality sitcoms (VH-1's upcoming "Liza and David," featuring singer Liza Minnelli and sexually ambiguous husband David Gest, is next), "The Anna Nicole Show" takes up where "The Osbournes" left off. Lacking in many significant personal relationships, Anna spends her days hanging out with her lawyer, Howard K. Stern; her personal assistant, Kim Walther; her 16-year-old son, Daniel; and her mood-stabilized poodle, Sugar Pie. So far, we have seen Anna stumbling around in a stupor, babbling incoherently, climbing in and out of bathtubs and getting her sizable ass stuck between a pair of narrow table legs.

Cheap, crass, deeply committed to unapologetic gawking, "The Anna Nicole Show" is to "The Osbournes'" what US Weekly is to People magazine. If "The Osbournes" humanized fame and made it seem familiar, "The Anna Nicole Show" deconstructs it and makes it seem monstrous. Tawdriness notwithstanding, this may be the more honest, and more valuable, view. At 34, her professional prime squarely behind her, Anna Nicole still clings to the same trailer park dream -- the one in which everything is pink and everybody loves her -- to her overall detriment and alienation.

Aside from Sugar Pie, whose obsessive devotion has reached the point of pathology, the other relationships in her life come across as sadly mediated. Attorney Stern may be Anna's "best friend," but he also stands to earn a fortune if she ever gets her inheritance. Assistant Walther sports an Anna Nicole tattoo on her arm, just like the ones Anna's forgotten aunt and niece in Mexia, Texas, have. In a near-perfect cycle of mutual exploitation, Anna demands that even friends and relatives demonstrate their loyalty as fans, and in return her friends and relatives demand that she remain rich and famous.

Anna is a parody of a bombshell -- big, blond, dumb and shallow -- in a parody of a TV show. From certain angles, in fact, "The Anna Nicole Show" comes across as a hilarious sendup of our bizarre and inexplicable obsession with famous people -- particularly with untalented, not very bright famous people who were never much more than marketable products to begin with.

After all, Anna Nicole is just the latest in a long line of easy-to-use celebrity objects. Her identity relies on a glut of cultural allusions, and her fame -- depicted here as a big empty house inhabited by an infantile icon and her professional entourage -- relies on our feeling of having seen her somewhere before. Anna Nicole has gotten a lot of mileage out of the ridiculous bombshell persona perfected by Marilyn Monroe and Jayne Mansfield, a persona that would not be funny without a certain type of reception. Drooling, googly-eyed lust is funny; shocked outrage and fist-waving is funnier.