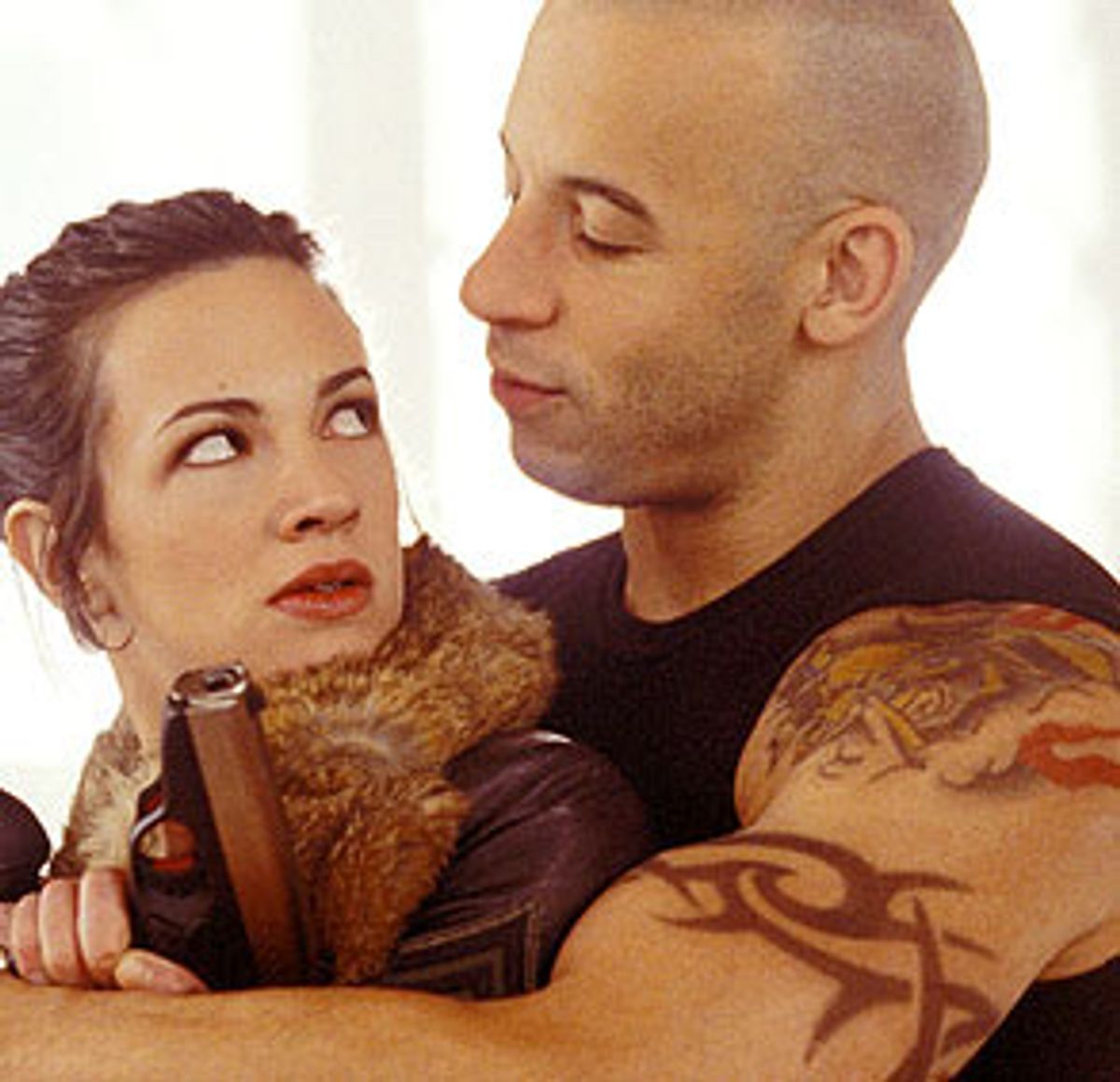 No one handles a water goblet like Vin Diesel.

In Rob Cohen's brash, chaotic and jostlingly entertaining "XXX," Diesel plays an extreme-sports addict turned reluctant spy hero, which means he parachutes out of planes and other fast-moving vehicles, sends a Corvette plummeting off a bridge, and out-snowboards an avalanche. But in his role as Xander Cage (also known by his code name, "Triple-X," which is tattooed like a brand name across the back of his neck), Diesel's key moment comes not as he's spread-eagled in midair under a parachute's bloom, or outrunning a gang of Colombian drug-lord baddies on a motorbike, but as he's dining in an ornate Prague restaurant with his love interest, the mysterious Yelena (Asia Argento). Diesel, with his aerodynamically correct shaved head and "Michelangelo by way of Charles Atlas" muscles, should look all wrong in this cathedral-like room dripping with spun-sugar old-world gilt, but instead he's exactly right. The tattoos crawling up his meaty arms are like a nobleman's vestments. And when he sets that water goblet down, the better to talk to his lady love, he places it on the table with the delicacy of a seasoned gourmand.

In "XXX," Cage's mission is, in short, to save the world. A veteran agent of the National Security Agency, Augustus Gibbons (Samuel L. Jackson, clearly having great fun playing the deadpan authority figure), has caught wind of a bioterror plot conceived by a Prague-based outfit of bad dudes who call themselves Anarchy 99. Anarchy 99 is led by Yorgi (Marton Csokas), a former commander in the Russian army who's so scary you wouldn't dare question the obviously phonetic spelling of his name. Yelena is his girlfriend and consort in all sorts of Anarchy 99 shenanigans, from running stolen cars to organizing prostitution and drug rings to taking over abandoned Czech mansions, where antique glass vases are set up and knocked down like bowling pins by Yorgi's muscle-bound henchmen.

Gibbons has long had his eye on Xander Cage, who makes a tidy living by videotaping his mad exploits and posting them on his Web site: In the movie's first 10 minutes, he steals a senator's sports car and attaches myriad video cameras to its hood and sides, the better to capture its ultimate destruction as well as his own miraculous last-minute escape. Cage is just like the guys Gibbons appreciates: brawny ne'er-do-wells who are "programmable, expendable -- and they work." Gibbons tracks Cage down and threatens him with jail time unless he agrees to work for the NSA. Cage complies, reluctantly at first, although it should be noted that the pixie-vixen Yelena, who turns out to be not quite the person she appears, is only part of the reason he changes his mind.

"XXX" bumps along awkwardly in places, particularly at the beginning: An early action scene feels big and dunderheaded and executed with mumbling uncertainty. But Cohen quickly finds his footing, and each subsequent action scene feels more magnificent than the last. Cohen's last project was the street-racing picture "The Fast and the Furious," a big-budget B-movie hootenanny that also starred Diesel. "The Fast and the Furious" felt energetic, loose and free, as well as completely and delightfully disreputable: Cohen didn't seem to care if the movie's sole reason for existing was to treat audiences to scenes of cool cars going really fast and crashing into stuff. But he also had the sense and smarts to fashion a few good old-fashioned emotional conflicts for his characters. The result was a drive-in movie ("Opening this Wednesday at a theater or drive-in near you!") made with reckless disregard for the fact that few drive-ins still exist. Like its down-and-out characters just looking for a break, it was a gesture of hope in a dirty, good-for-nothing world.

But how could anyone not like such a good-natured cue ball? Diesel tends to deliver his lines slowly and thoughtfully -- you sometimes find yourself leaning forward in anticipation of the next one -- but he still manages to come off as light, offhanded, breezy. He's unbruisable and vulnerable at the same time: When he tries to get Yelena to dance with him in a nightclub, and she refuses, he persists -- "Hey, I'm a really good dancer" -- and his anxiety about pleasing her rings through.

Disarmingly, he shows a boyish enthusiasm for the spy gadgets he's been given (they include explosive bandages, guns outfitted with revolving chambers of darts for all occasions, and a pair of X-ray binoculars). He explains his preferred type of car simply and unequivocally: "I like anything fast enough to do something stupid in."

And fabulous as he looks while zipping along dirt trails on a motorbike or parachuting from a fast-moving car to an even faster-moving hydrofoil/submarine (don't ask), he makes his tough-guy action scenes count for more when he takes Yelena in his arms and kisses her with sea-anemone softness.