I know lusting after this big ugly hunk of a man is ridiculous -- but it's not just physical. Really. 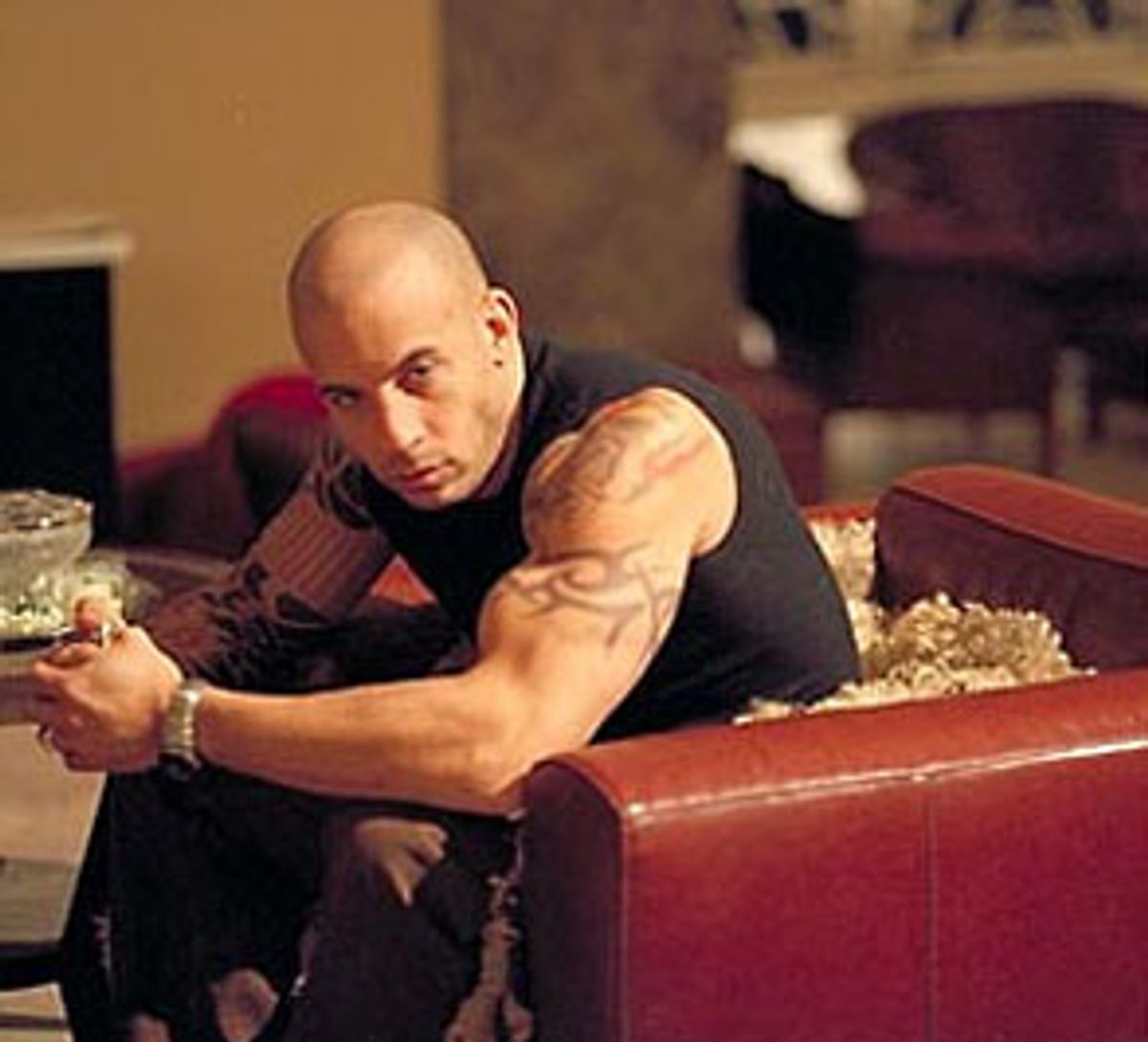 Vin Diesel is not a likely icon of lust. He is a big, ugly hunk of a man with dubious acting skills and the growling Brooklyn accent of a mechanic. He's best known for a string of big-budget B movies -- "Pitch Black," "The Fast and the Furious" -- with ludicrous premises and even worse dialogue. Yet he's suddenly commanding upwards of $11 million a picture; and if his latest film, "XXX," is the hit it's supposed to be, he's essentially Hollywood's hottest new star. Most curious of all, however, this ridiculous actor exudes some kind of magnetic draw on my friends, girlfriends and -- oh dear -- even myself.

It's bad, this Vin thing. An otherwise reasonable friend of mine -- the erudite director of a nonprofit, not typically prone to bouts of teenage swoon -- recently told me that she had the hots for Diesel. "He's just a raw hunk of a man," she said, a mild expression of embarrassment flickering across her face. "You know: Pull my hair and make love to me!"

Yes, but the culture is full of manly hunks. So how else to explain Diesel's overpowering magnetism? Entertainment Weekly, which -- along with nearly every other magazine on the planet -- plastered him on its cover last week, under the headline "The Fast and Furious Rise of Vin Diesel," has posited that he is essentially a capable body that dropped out of the sky at the right moment. One agent pointed out that Schwarzenegger, Stallone and Willis are too old, and that Diesel just fell into place.

Certainly, this is true: For years, the screen has been empty of compelling ass-kicking action heroes. Hollywood has attempted to pass off a number of utterly unconvincing pretty boy actors as two-fisted idols -- Matt Damon, Ben Affleck, Keanu Reeves (except for "The Matrix" Keanu) -- who were too self-involved with their own moral and intellectual torments to truly be heroes. The Rock, the only other traditional action star to debut in the last few years (by way of the WWF and "Scorpion King") simply bulged his way through his film.

But Vin Diesel has taken the best of traditional action heroism -- the watermelon muscles, the lumpen voice, the stoic ambivalence to pain of all kinds -- and given it a contemporary dose of irony. In a way, he's the perfect 21st century hero: a bad guy who's really a good guy, who isn't necessarily Wittgenstein but is certainly smarter than he looks. Not pretty, but not too beefy either: Just a dose of testosterone with a heart of gold (once you dig down) and biceps of steel, with enough self-consciousness about the campiness of the whole endeavor to make cheesy action flicks entertaining again. He makes it possible to find him absurd and irresistible at the same time.

There are other obvious reasons for the Vin Diesel swoon. First, there's the delightful name -- reminiscent of greasy motorcycles and the Italian mafia -- which is simply too good to be true (it isn't). Then there's the unforgettable profile: both his body, enormous without being muscle-bound à la Stallone or Schwarzenegger; and his head, with that bulbous bumpy bald pate, an oversized noggin that goes on forever. Finally, there's the voice; a slow, bemused growl, a low-rent bedroom baritone.

For the women who confess to loving him, Vin Diesel exudes an odd sort of sexual charisma. No woman I know would actually call him good-looking, but several confessed to melting over his softer-edged version of beefy masculinity. This is a man, after all, who shows up in his latest film wearing a fur coat, a fashion statement that is at once openly effeminate and self-consciously masculine (only a man confident enough with his own testosterone levels would don a fur).

"He was a New York bouncer," one friend tells me, as if that explains everything, and in a way it does: the fashion sense, the cocky attitude, the muscles. "You have to admire him for making it so big."

My male friends, on the other hand, tend to roll their eyes and groan when I beg them for their opinions, offended that I would waste my time admiring a hokey action star. My male friends are, it should be said, mostly sensitive film geeks unimpressed by another man's biceps; but judging by box office receipts, they must be in the minority. "I can't believe you're writing about that doofus," one said crossly, forcing me to cough with embarrassment and pretend I was just "curious about the Vin phenomenon." "He can't act!"

But while Vin Diesel is no Alec Guinness, whether he can really act is beside the point. Vin Diesel's most prestigious films were also his smallest roles: in "Boiler Room" and "Saving Private Ryan," he plays the gruffly good-humored Italian-American lug who doesn't quite grasp what's going on around him. In both films, there's a suggestion that he's actually an actor who might be able to do something with a fully developed role. But his subsequent rise to stardom has been propelled by schlock pics like "Pitch Black" and "The Fast and the Furious," where his acting has consisted primarily of oozing a cool charisma; and in its own way, that alone is more than enough.

Both these films were, to put it mildly, mind-numbing and ridiculous. I loved both. Because of Vin Diesel.

In "Pitch Black," he plays Riddick, a calmly confident convicted murderer who can see in the dark -- the only hope for a group of hapless travelers stranded with hungry aliens on a planet of eternal night. In "The Fast and the Furious," he's Dominick Toretto, a calmly confident convicted felon who has a way with race cars -- the only hope for a hapless detective who hopes to break a truck-jacking ring. His purpose in "Pitch Black" is mostly to lurk menacingly in corners, gaze stoically out into the lethal night and deliver groaner lines while he kills aliens with his bare hands ("He did not know who he was fuckin' with"). In "The Fast and the Furious," he calmy crashes cars at 170 miles an hour, pontificates about family values and delivers howlers like: "I live my life a quarter mile at a time." Of course, in both films, he saves everyone's asses and turns out to be a big softy.

In the preposterous "XXX," a kind of James Bond thriller for the Playstation crowd, he once again plays "the best and brightest of the bottom of the barrel." Xander Cage is a tattooed, husky underground action sports hero who likes to steal cars from senators who ban rap music; he is recruited as an expendable body by the NSA in order to infiltrate a band of anarchists who are planning the apocalypse when they aren't busy having sex with strippers. Vin Diesel's purpose in this movie, much as it was in "The Fast and the Furious" and "Pitch Black," is to deliver teen-friendly one-liners like "Don't be a dick, Dick" with a cocky expression on his face; to flex his tattoos and look macho as he jumps off the back of a motorcycle or snowboards out of an avalanche.

Vin Diesel bears some resemblance to all three of the aforementioned holy trinity of contemporary action heroes -- Willis, Schwarzenegger, Stallone -- but personality-wise he's closest to Willis (in his "Die Hard" days, as opposed to his "Sixth Sense" or "Story of Us" days). Willis had a brain underneath all that brawn, and delivered his punch lines with a wry arch of his eyebrows that made you believe that he thought action films were a ridiculous, if lucrative, lark. Like Willis, Diesel also seems to be having a fine old time in his films: He saunters through the scenes as if he were on a sightseeing tour of Paris. He rarely breaks out into a full grin, let alone a laugh (though he has a fine deep laugh), but there often is a smile just below the surface of even his silliest lines. Again like Willis, he's in on the joke too.

Or perhaps these are just the traits that I want to attribute to him, perhaps to make my own moviegoing a little more intellectually palatable. Unfortunately, Vin Diesel doesn't seem to be a great ironist off-screen; by all accounts, he has taken his stardom very seriously, and very methodically manhandled his way into Hollywood. A Hollywood friend told me a second-hand but convincing story about Diesel's arrival in town in the mid-1990s: Meeting with agents after his debut short film "Multi-Facial," Diesel would confidently growl, "You better sign me up now, while you can afford me. I'm going to be a star."

But Diesel would be wise to save his cash while he can. He may never become a Harrison Ford, Mel Gibson or Bruce Willis -- thoughtful action heroes who aged gracefully out of their wife-beater tank tops and into grown-up dramatic roles. But he seems to have a touch more depth, and a better sense of humor, than a Stallone or Schwarzenegger, who were ultimately useful to us only as icons of muscle-bound masculinity. If Vin Diesel turns out to have one shtick, and one shtick only, he will certainly fade from the screen as our idea of an action hero changes once again.

I get the sense that my girlfriends who adore Vin Diesel wouldn't really know what to do with him if he showed up on their doorstep and actually begged to make love to them. Part of the fun of lusting after Diesel is the fact that it's just so silly to do so. So perhaps what is ultimately so enjoyable about our latest action throb is that he seems to be so very much enjoying what he does: You just can't help but get the sense that Vin Diesel's favorite role is himself. And even if Diesel is almost 100 percent artifice -- the name, the muscles, the sex appeal -- it's an illusion that goes down as easily as a pint of Cherry Garcia ice cream, with the same slight twinge of guilt.