Robin Williams as a superstore psycho? Kill me already. 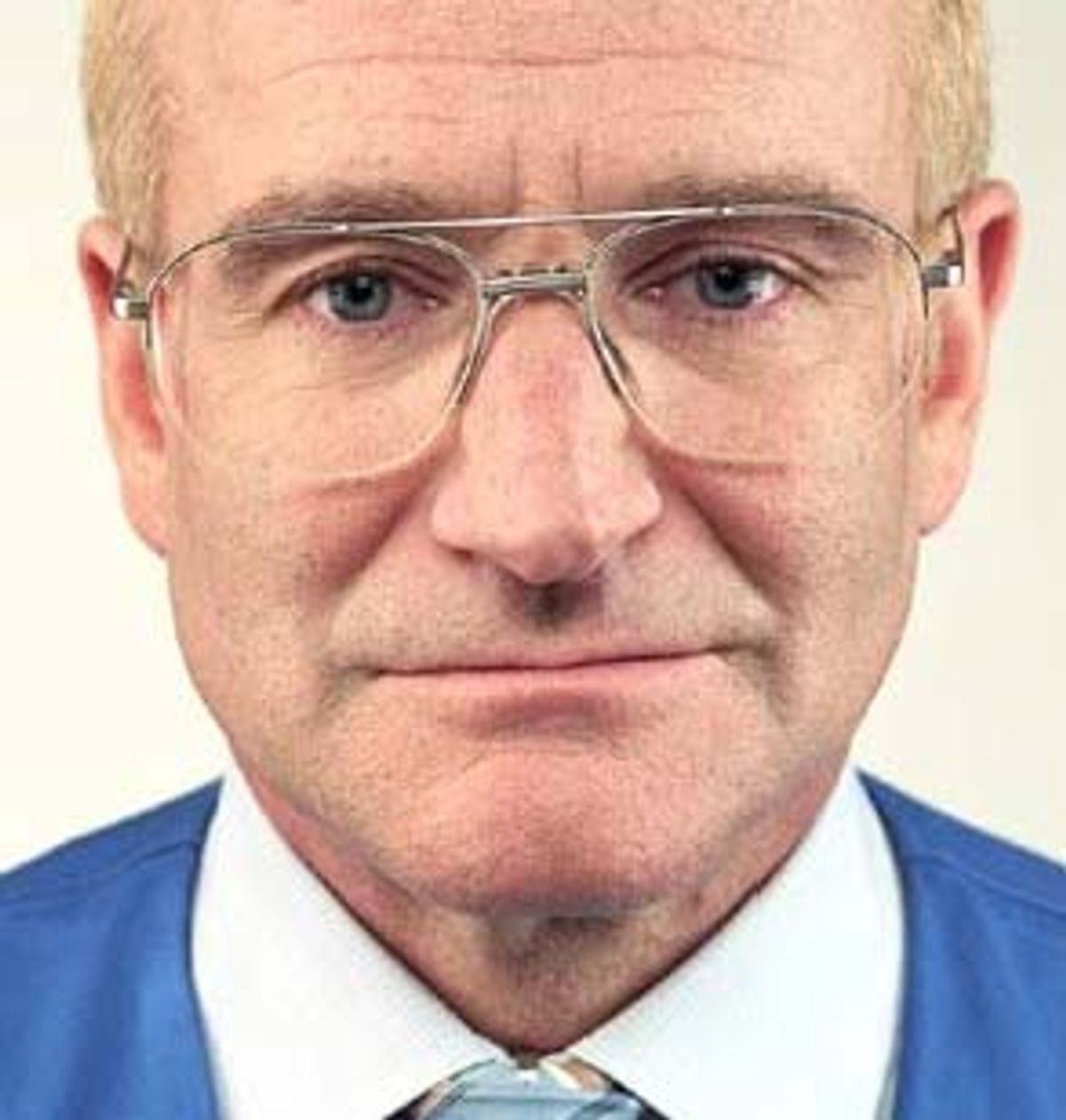 Do the people who make movies about the sterility of American middle-class life ever actually go to the places that are featured in their films? Much of "One Hour Photo" (like "Eight Legged Freaks," the title is another victim of the hyphen bandit) takes place inside a cavernous discount superstore. The place we see is sterile, blindingly white and arranged with precision. Muzak keeps the atmosphere and the shoppers in a near-narcotic state. All ambient noise has seemingly been sucked out.

It should take all of about 10 seconds for anyone who's ever gone to one of these places to spot the movie's view as a crock. Walk into any Wal-Mart or Target and your eye is fairly assaulted by colorful displays clamoring for your attention. Instead of rows of aisles that stretch from front to back, these stores are usually laid out in departments at right angles to each other that force you to wander through the entire place even if you're just dashing in for one item. And instead of customers who look as if they're auditioning for extra work in "Night of the Living Dead," people run the gamut of moods from happily poking about to seriously shopping to grumpy to exhausted. Kids are running around, dashing for the toy department or throwing tantrums. (Or, if you go during back-to-school time, laying siege to the clothing and stationery departments.) Should you even hear any Muzak over that din, it's regularly interrupted by calls for customer assistance, price checks and prerecorded announcements of specials.

But that wouldn't suit the purposes of writer-director Mark Romanek (previously known for his music videos for Madonna and Nine Inch Nails), who wants to show that Americans are living in a zombified wasteland of consumer-generated fantasies because they have no identity of their own, or some such drivel. "One Hour Photo" is an art-house horror movie, and like most art-house versions of genre films, all the vitality and juice of genre conventions have been sucked right out. The irony of the movie is that it puts you into the same torpor that's supposed to be afflicting the characters. It's a stalker flick where things like empathy or suspense or horror have not been allowed to disturb the pristine achievement of the surface.

The stalker here is Sy (Robin Williams), a middle-aged photo technician who, in his polyester trousers and company vest, presides over the store's photo lab. Even before Romanek shows us Sy's spotless and anonymous bachelor apartment with its uniformly blah beige tones, hotel art and showroom kitchen utensils, we're cued to see that Sy has no life outside of his work identity. He greets everyone with his chipper little sayings as if he were acting in a commercial for his company rather than working in one of its stores. Sy is living in his fantasies, specifically his fantasies of belonging. He's given voiceovers in which he talks about how important he considers his job, which he sees as helping people to preserve their memories. He has no happy memories of his own to preserve. So he imagines himself as a beloved uncle to Nina and Will Yorkin (Connie Nielsen and Michael Vartan) and their young son, Jakob (Dylan Smith). When Nina brings in film to develop, Sy routinely prints up an extra set for himself. The only color in his apartment comes from the wall Sy has devoted to his meticulously arranged collection of the Yorkins' snapshots.

We know that Sy's obsession is leading up to something terrible -- the movie, told in flashback, opens with Sy being interrogated by a police detective (Eriq La Salle). But of course the movie makes us wait to see just what that terrible occurrence is. How fitting, then, that "One Hour Photo" was produced by Christine Vachon, whose specialty (as in "I Shot Andy Warhol" and "Boys Don't Cry") seems to have become movies where we're left to wait, dreading the awful thing that's coming at the end.

There's something queasily exploitative about that approach. But a movie with as much art in it as "One Hour Photo" would never get accused of being exploitative in the way that a routine horror or action movie would. There's no physical violence onscreen. What there is, is something far more unpleasant to sit through than the dumb blood-spraying murders that punctuate slasher films: a sequence that focuses relentlessly on the fear and misery and shame of Sy's victims. And the pat explanation that follows, Romanek's attempt to account for Sy's actions, is as trite as anything from the old Hollywood social dramas that cannibalized Freud. It's not every movie that offers you a chance to feel sordid and then suckered, all within a few minutes.

Besides, this material has already been done much better, in Joseph Ruben's 1987 "The Stepfather," a horror picture about a serial killer who, in search of the perfect family, insinuates himself into one family after another only to kill them off when they fail to live up to his expectations. "The Stepfather" is not only a truly frightening movie but the most savage satire in any medium of the dream Ronald Reagan resurrected of a white-picket-fence America. Ruben showed how easily his killer's victims became seduced by his impersonation of the perfect middle-class husband and daddy -- and he did it without making the audience feel superior to them.

Like Terry O'Quinn in "The Stepfather," Robin Williams' Sy is spurred to action when the Yorkins fail to live up to his fantasies about them. But Mark Romanek shows barely more compassion for the Yorkins than he does for Sy. Sy is their punishment for thinking that nothing can disturb their comfortable suburban existence. And the film implies that they will become stronger after being terrorized by Sy. Unfortunately for Romanek (but fortunately for us), he's cast Connie Nielsen as Nina who, as she showed in "Mission to Mars" and "Gladiator," is one of the most believable actresses around. Nothing of Romanek's prefab approach sticks to her. She's a real person, showing real anxiety and tenderness, in the midst of characters who have been designed to score points. (As Sy's boss, Gary Cole scores some genuine points; he's the epitome of every by-the-book creep that retail management seems to attract. His performance should be a real kick to all those employees that Wal-Mart has kept working after they're off the clock.)

Robin Williams isn't bad, exactly. He stays inside of his repressed character, his mouth drawn into a tight, straight line. But the performance is of a piece with Romanek's phony vision, a conceit rather than a character. Worse, like Williams' performance in "Insomnia," it's one of those roles that actors take to stretch themselves, only to wind up canceling out all their best qualities. Sometimes the casting of an actor in an unexpected role can lead to surprising results. (Richard Thomas was shockingly effective as a killer a few seasons back on "The Practice.") But there's no more to Sy than the idea of seeing Robin Williams as a psycho. I'm not anxious to see Williams in any more of his dear, elfin roles. But coming a few weeks after his knockout HBO special, a performance that made you remember all the reasons you found him funny in the first place, "One Hour Photo" looks less like a new opportunity than a drab straitjacket, a wild-card actor held hostage to a director's crummy idea.

Romanek spends the movie scoring points off the educated, liberal audience's traditional prejudice against the middle class. He derides their materialism and the security that comes with it, security they have never had cause to question. The question about "One Hour Photo" is whether critics and audiences will be smart enough to see that Romanek is lulling them into something just as unthinking? This is a movie where you learn all you need to know about each character as soon as you see them, where every shot has been designed to impart its preordained meaning, where the mysteries and vagaries and unpredictability of human behavior have all been carefully excised. "One Hour Photo" has been made to flatter the audience's preconceptions. It's the most passive viewing experience imaginable. The audience is, in effect, turned into Sy's customers, told to wait patiently while the pictures are developed for us.