Antiabortion groups use "crisis-pregnancy centers" to scare women out of having abortions. Some lawmakers have cracked down on them. President Bush increased their federal funding. 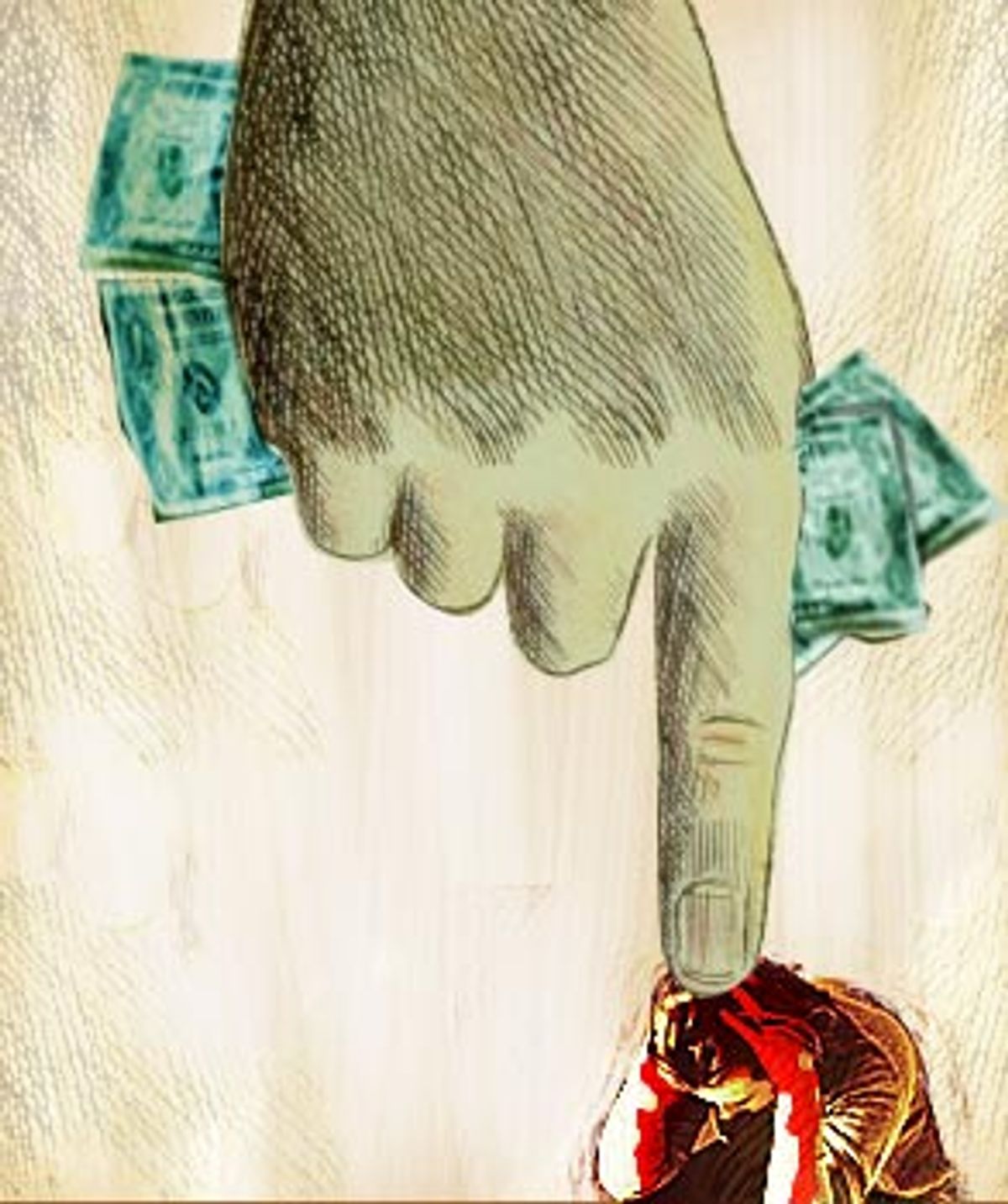 In the past decade, so-called crisis-pregnancy centers have become an increasingly central part of the antiabortion movement. They pose as women's health clinics and use innocuous names like "Women's Care Center" or "Pregnancy Problem Center." But instead of employing nurses or social workers, they're staffed by antiabortion activists who often make patients watch gory antiabortion videos, warn them about nonexistent health risks posed by abortion, and scare them with the threat of suffering "post-abortion syndrome," a psychiatric disorder that exists only in pro-life lore.

As of 1999, the National Abortion Rights Action League (NARAL) says, there were more than 3,200 crisis-pregnancy centers, or CPCs, in America. In New York state, they've been so deceptive that New York Attorney General Elliott Spitzer subpoenaed 11 of them during a February investigation. The investigation was sparked by complaints from women who'd visited the centers, but after one CPC agreed to negotiate changes to its misleading advertising and counseling, Spitzer withdrew all the subpoenas in the hopes of reaching similar settlements with the other centers. The Ohio attorney general took on the centers in the same way in 1991, with similar results.

Lawsuits against CPCs have resulted in injunctions in California and North Dakota prohibiting them from advertising themselves as women's health clinics, and one California judge restrained a center from disseminating false information about abortion. In 1989, a Missouri woman successfully sued a CPC for intentional infliction of emotional distress after her pregnancy test was withheld until she watched a graphic antiabortion video. During a 1991 congressional hearing on CPCs, Rep. Ron Wyden, D-Ore., found that they "hold out that they are health clinics, but when the women get there, there are no medical professionals. A very strident, very aggressive antiabortion campaign is what they get."

But in a growing number of states, the government isn't prosecuting these places -- it's funding them. Last year, Pennsylvania's Project Women In Need, or WIN, gave $4.3 million to antiabortion agencies, including 25 crisis pregnancy centers. Delaware and Missouri also give tax money to CPCs. The state of Florida has raised more than $650,000 for the centers by selling "Choose Life" license plates. Similar license-plate laws will soon go into effect in five other states.

Under the Bush administration, the federal government also channels money to crisis-pregnancy centers to administer abstinence-only education. For example, the Pregnancy Decision Health Centers, based in Columbus, Ohio, were awarded $585,000 to teach abstinence in 40 public schools. The group teaches that safe sex is a "myth" and uses a textbook that tells students, "Premarital sexual activity does not become a healthy choice or a moral choice simply because contraceptive technology is employed. Young persons will suffer and may even die if they choose it."

Federal funding for abstinence education began with a $50 million appropriation in the 1996 Welfare Reform Bill. But according to a spokeswoman for Rep. Ernest Istook, R-Okla., an abstinence-funding champion, the Clinton administration was not strict in enforcing chastity-promoting criteria. The money was channeled through the states, spokeswoman Micah Swafford says, and some of it went to fund general sex education and extracurricular youth activities that were supposed to keep kids out of trouble. Unhappy with how the money was being spent, in 2000 Istook sponsored a bill creating $20 million in abstinence-only funds that would be given directly to chastity educators. That's where most of the federal money that goes to CPCs comes from. According to NARAL, the centers received $3 million from that pot last year.

The Clinton administration tried to "undercut" the program, Swafford says, by failing to provide money to administer it. That quickly changed under Bush, who approved a dramatic increase in abstinence-only funding to $73 million next year.

Still, right now the most direct government support of CPCs comes from states, and of all the state-funded programs, Pennsylvania's is the biggest. In fact, for the antiabortion lobby, it's a model for federal legislation. In 1999, Pennsylvania Republicans Sen. Rick Santorum and Rep. Joe Pitts sponsored the Women and Children's Resources Act, which, had it passed, would have given $85 million to CPCs and maternity homes. According to the National Right to Life Committee, Pennsylvania's law was the inspiration for the bill. In February, Republican congressmen introduced bills that provide $3 million to buy ultrasound machines for CPCs, thus increasing their apparent legitimacy.

Project WIN was created in 1996 by Pennsylvania Gov. Bob Casey, an antiabortion Democrat. Under the law, all state grants to women's health centers like Planned Parenthood -- which are forbidden from using the funds to counsel about abortion, much less to perform it -- are matched by equal monies for "alternatives to abortion" programs that take an active antiabortion line. In addition to CPCs, Project WIN, working through an agency called Real Alternatives, funds maternity homes and adoption agencies.

According to the work plan filed with the state government as part of its contract, Real Alternatives service providers must "maintain a pro-life mission and agree not to promote, refer or counsel abortion as an option to a crisis pregnancy."

Of course, as a government-funded program, Real Alternatives can't direct money to clinics that openly proselytize to their patients. They can't, as the ACLU's Loise Melling explains, say, "God doesn't want you to kill your unborn baby." But under the Supreme Court's 1988 Bowen vs. Kendrick decision, money can be given even to "pervasively sectarian" organizations as long as programs don't have the "primary effect of advancing religion." Thus while government-funded counselors can't invoke Christianity when trying to persuade their patients, they're free to promulgate theories like post-abortion syndrome that are derived from religion if they can be said to serve some other social purpose.

Needless to say, Project WIN outrages abortion-rights activists. "These are organizations that have been successfully sued for deceptive advertising and inflicting emotional distress on their clients," says Vicki Saporta, president of the National Abortion Federation. Saporta says her group regularly receives reports from abortion providers about patients who had "horrible" experiences at crisis centers before finding genuine clinics. "They've been known to give false gestational assessments," she says -- telling a woman that her pregnancy is further along than it really is. "They are ministry-based organizations designed to dissuade women from terminating an unwanted pregnancy."

Abortion-rights groups have compiled numerous accounts by women who have felt deceived by CPCs. Most victims don't want their names used, but one who doesn't mind is Sean Sweet, a 33-year-old Philadelphia woman whose experience helped to politicize her -- she later went to work for NARAL in Pennsylvania.

Seven years ago, Sweet was traveling through central Pennsylvania on the way home from a New Orleans road trip when she realized she might be pregnant. She looked in the phone book and found a center offering free pregnancy tests.

"I took the pregnancy test. They said, 'We want you to wait in this room and we're going to show you a video about abortion.' I thought it would be about my options," she recalls. "Instead, there were these horrible images of disfigured babies and aborted fetuses, looking very large like they were almost to term. Then there was a little segment where the woman was supposed to be thrashing around and screaming during her abortion."

Sweet had had an abortion when she was 14, and she knew she was being lied to. She wanted to leave, but she also wanted the results of her test. It turned out she was pregnant, and though the counselors tried to stop her, she stormed out and later had an abortion. Not knowing she'd ended her pregnancy, a counselor from the center called her three times to tell her, "God loves your baby."

When Sweet learned that her tax money was going to CPCs, she was appalled. "These are Stepford Wives hanging out waiting to pounce on somebody. There was nobody medical there. Those are lies on those tapes. That the state or the government might actually fund it, that's outrageous to me."

Sweet is correct that Real Alternatives counselors often don't have any medical training -- in fact, the agency's contract with the government doesn't specify any sort of standards or qualifications for CPC personnel. While Planned Parenthood says the money it received from the state last year allowed certified health workers to care for 260,000 patients, according to its own filings, Real Alternatives spent the same amount for a mostly volunteer staff with no medical training to counsel 11,000 women. One Real Alternatives program paid for a woman to visit pregnant prisoners and give them models of 12-week-old fetuses. According to a report filed with the state government, "The women make small cribs for the 'babies,' paint hair on them, and cover them with tiny blankets."

Real Alternatives staff didn't return numerous phone calls, and several of its affiliated pregnancy centers refused to talk about their operations. But its own publications prove that the organization promotes misinformation. The Real Alternatives Web site offers a "Sexual Health Quiz" designed to show the uselessness of condoms and other contraceptives. One true-or-false question reads, "Condoms prevent the transmission of the most common STD's (sic)."

According to the site, the correct answer is false. "A U.S. Government study released recently reveals no proof that condoms prevent the transmission of the most common STDs, including gonorrhea, chlamydial infection, trichomoniasis, genital herpes, syphilis, chancroid, and HPV-associated diseases," it says, citing a 2001 Department of Health and Human Services report.

That statement is deceptive -- the actual report says, "Beyond mutual lifelong monogamy among uninfected couples, condom use is the only method for reducing the risk of HIV infection and STDs available to sexually active individuals." The quiz writers twisted the report's findings that there wasn't enough data available to quantify how much protection condoms offered against each disease, in order to give the false impression that condoms simply don't work.

CPCs operating under the Real Alternatives umbrella also offer medically misleading information. The Women's Care Center, a chain of seven CPCs in Erie, Pa., that receives both direct state funding and $262,357 in federal abstinence-only funding, identifies itself as a "ministry" on its Web site. The centers warn women that abortion might result in post-abortion syndrome, and they offer counseling through a program called "Healing the Emotions of Abortion Related Trauma," or HEART.

Rue is the foremost champion of post-abortion syndrome and a star in the pro-life movement. He's also on the fringes of medical opinion. While most people would agree that abortion can be a terrible experience, and psychologically troubling, there's no evidence that it does long-term psychological damage. 1997, the American Psychological Association reported that an eight-year study of 5,200 women showed that "The availability of legal abortion is not associated with long-term psychological distress in women who use it ... Even highly religious women are not at significantly greater risk of psychological distress because they had an abortion." In 1987, President Reagan ordered C. Everett Koop, his surgeon general, to document the existence of post-abortion syndrome. Koop couldn't, and later testified before Congress that the psychological problems caused by abortion are "minuscule from a public health perspective."

But as CPCs are religious, rather than medical, institutions, faith trumps science there. In a 1994 speech, Robert Pearson, who opened America's first crisis-pregnancy center in 1967 and authored a manual for CPCs, was unapologetic about lying to patients. "Obviously, we're fighting Satan," he said. "A killer, who in this case is the girl who wants to kill her baby, has no right to information that will help her kill her baby."

In the past, it was just scared women who paid the price when people like Pearson posed as medical counselors. Now that the government has gotten into the business of supporting these programs, we're all paying for it.