Not even Elizabeth Hurley in glitter and a tartan miniskirt can save this dopey comedy. 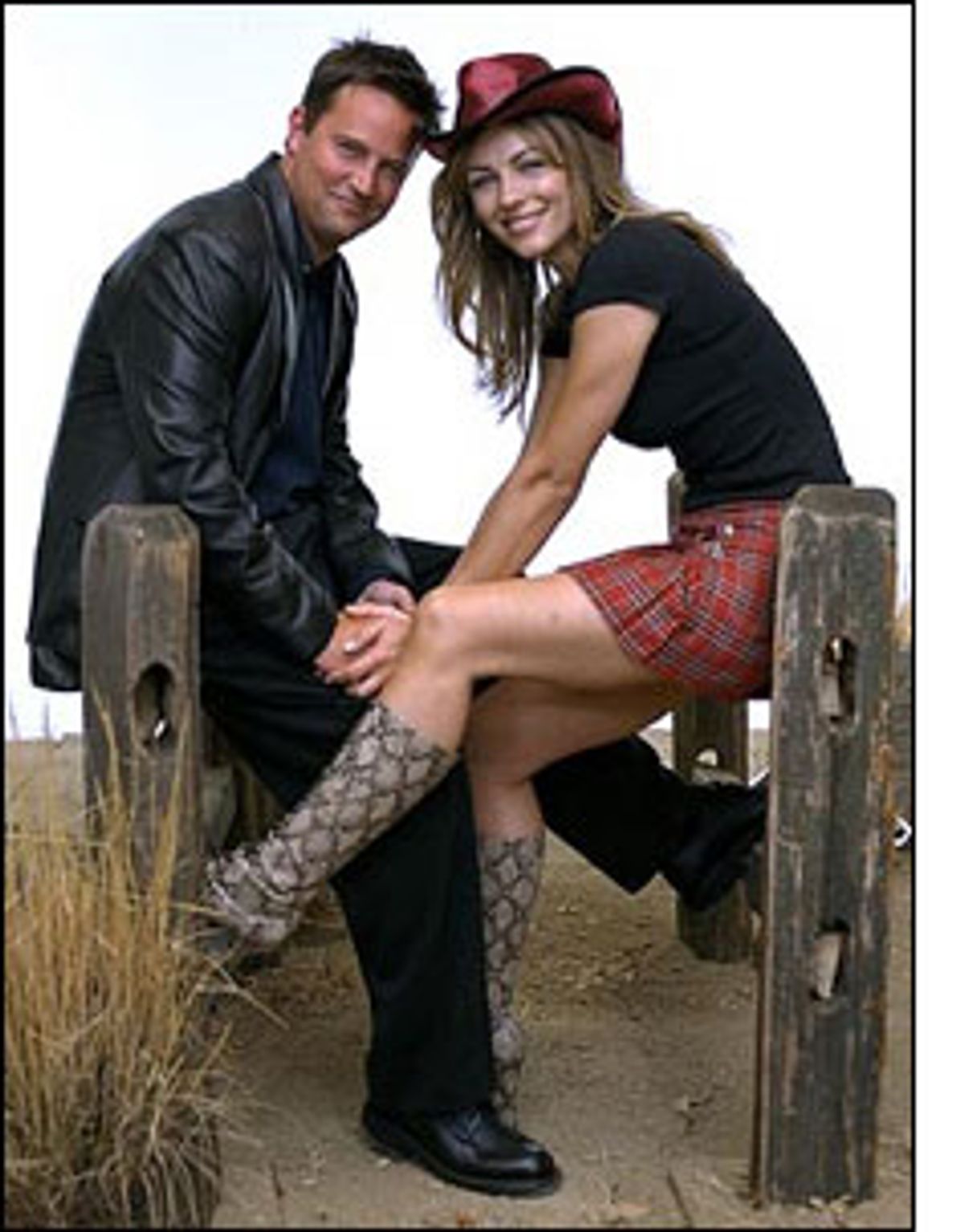 You know a movie is DOA when not even the sight of Liz Hurley in a "Trailer Trash" glitter T-shirt, tartan miniskirt and lace-up python boots can revive it. "Serving Sara" is a sad little comedy that starts out in nowheresville, and where is there to go from there? It sets out at a slow, disjointed crawl and, just when you thought it couldn't get any more tedious, crabwalks downhill from there.

How could any comedy be so boring? Even more mystifying, how could "Serving Sara" be so dreadful when, at the very least, it features one actor with decent comic timing (Matthew Perry) and one with an incredibly sexy, mischievous sense of fun (Hurley)? Director Reginald Hudlin ("House Party") and writers Jay Scherick and David Ronn attempt to load the picture up with slapstick hilarity (you'll love the part where Perry plunges his plastic-glove-sheathed arm up a bull's rectum), but the excess weight of all that unfunny business only slows the pace down more. Long before "Serving Sara" drags its butt to the finish line, you wish you were watching a different race.

Perry plays Joe, a sort of sad-sack wisecracking hipster process server who isn't particularly good at his job. His boss (played by Cedric the Entertainer, who, with his loud '40s ties and shiny shirts, is by far the most entertaining presence in the movie) gives him a crucial assignment: He's got to deliver divorce papers to the beautiful (and very rich) Sara Moore (Hurley) who, although she doesn't know it yet, is about to be left penniless in the dust by the husband (Bruce Campbell, in a role that gives him very little to do) whose business she helped build. She's surprised, enraged and hurt when Joe shoves the documents into her hands and snaps her picture as a record of the job's completion; before long, though, she and Joe have joined forces to get revenge on the nasty husband, an odyssey that takes them from New York City to a Texas dude ranch.

Along the way Sara gets her trouser leg caught in an airport baggage conveyor belt, which of course means that the cloth tears away leaving her lacy undies exposed (that's when she trades her upscale duds for the cheap, sexy miniskirt outfit); later, she "talks" her way into a fleabag motel by flashing the proprietor (we see her only from the back). Hurley is a charming and likable comic actress, and one who's game for anything: She gladly showed us her melons for a great sight gag in "Austin Powers: International Man of Mystery"; and her foxy naughtiness was irresistibly pleasurable in the remake of Peter Cook and Dudley Moore's "Bedazzled."

But "Serving Sara" is an abuse of everything that usually makes Hurley so much fun. She has always been a terrific sport about going along with -- and making the most of -- silly, delectably off-color jokes, but here she's saddled only with coarse ones that don't make good use of her talents (or her beauty). She and Perry never find an easy, natural rhythm. Their scenes together feel so stiffly scripted and awkward that when they finally kiss, you can't believe their lips fit together right. They're two actors lost in their own movie and in each other's arms, which spells nothing but disaster in a romantic-caper comedy.

Nearly every joke hits with a thud: Joe tells his crooked, dumb-lug rival process server (played with valiant professionalism by Vincent Pastore) that he "must have grown up in a house with lots of lead paint." It's the kind of line that, to borrow the playground parlance the movie seems most comfortable with, is so funny you forgot to laugh. Sitting through "Serving Sara," you're likely to forget over and over again, to the point where you can't remember why you bothered to show up in the first place. It's a movie that makes you feel old and enfeebled before your time, instead of invigorated. And that's a lousy way to feel anytime, but especially in the presence of Liz Hurley flouncing around in a tartan mini.