Never mind the digital babe-ology or Al Pacino in full huzzah, this Hollywood satire is way too clever for its own good. 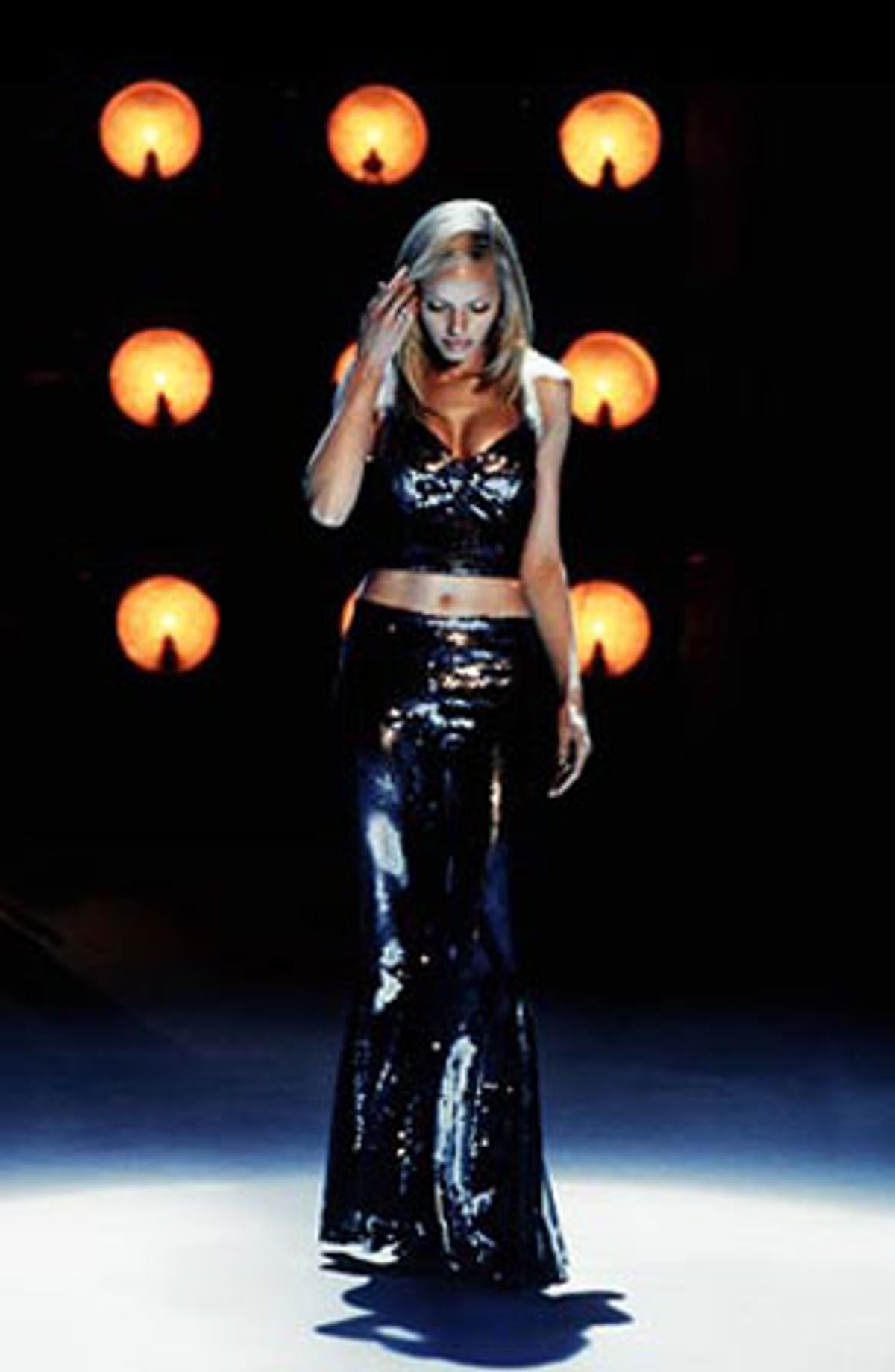 "Simone" may be beautiful -- I'm talking about the sleek look of Andrew Niccol's movie, rather than its self-evidently fake title character -- but it's just an idea that never quite turns into a story. Audiences may turn out to see this, at least at first, since it's basically a farce that features Al Pacino in his most avid scenery-chewing mode. But you get the feeling that writer-director Niccol (who wrote "The Truman Show" and wrote and directed "Gattaca") had in mind to create a scathing, trenchant satire on the shallowness of Hollywood and the emptiness of celebrity and, well ... what was I saying? I must have dozed off for a moment there.

It's not merely that these subjects have already been satirized to the point of ultimate tedium; more importantly, "Simone" just isn't very funny. It's relentlessly clever, as when Niccol casts Pacino -- perhaps the most actorly of all movie stars -- as Viktor Taransky, a failing movie director who sets out to prove that actors aren't necessary. Or when the digital superstar created by Viktor, a pixelated vixen named Simone (short for Simulation One -- get it?) purrs during a television "interview," "I suppose what I like best about the movies I'm in is that they're not about special effects."

There are real issues here, I suppose. Digital tweaks of all kinds are used in movies now, including (reportedly) the cosmetic enhancement of real actors. And the era of fully artificial "synthespians" isn't far away; George Lucas would probably work that way if he could. But the cleverness of "Simone" itself feels self-congratulatory and false, as does Niccol's portrayal of moviegoers and Hollywood insiders alike as hapless boobs and suckers ready to swallow whatever bogus tripe is dished out to them.

For comedy to work -- even outrageous and absurd comedy -- there has to be some level at which it's telling the truth. But "Simone" bounces around haphazardly, at some moments steeping in its juvenile irony and bitterness, at others trying to become exactly the kind of Hollywood light entertainment it decries, and all without any relationship to the real world. It's a synthetic movie about a synthetic movie star.

That's truly a shame, because Niccol is clearly talented and retains the same marvelous eye for horizontal composition and muted, carefully orchestrated color schemes that he displayed in "Gattaca." (Much of the credit should go to veteran cinematographer Edward Lachman, whose résumé stretches from Werner Herzog and Wim Wenders films in the '70s to "The Virgin Suicides" and "Erin Brockovich.")

Furthermore, there are glimmers of a better, funnier movie in "Simone," mostly found in Pruitt Taylor Vince's performance as a scabrous tabloid editor with terrible teeth who's determined to learn why Simone is never seen in public. Vince plays the character as a hilarious grotesque -- at one point fondling a hotel-room toilet seat he believes to have been graced by Simone's derrière -- without losing touch with the pathetic and all too human quality of his obsession.

Pacino, on the other hand, never gets comfortable in the part of Viktor, who is essentially a stock comic character, the failed idealist temporarily redeemed by an ambiguous gift from the gods. With his histrionic sighs and exaggerated gestures, his gravel-in-a-barrel voice and the battered desert geography of his face, Pacino becomes the natural center of any movie he's in. To put it mildly, he's not an actor well suited to light comedy. And the point of "Simone" is supposed to be that even the invention of a superstar can't rescue Viktor from obscurity; her celebrity dwarfs his, and his only claim to fame arrives when he tries to destroy her. But even a miscast Pacino is a dozen times more engaging than a digitized bimbo starlet.

Right from the outset, the satire in "Simone" hits the ground with a thud. Viktor is a two-time Oscar-nominated director, a veteran of the New York independent-film scene of the '70s, who's feuding with a bitchy actress (an overplayed cameo for Winona Ryder) over, you guessed it, the size of her on-set trailer. His ex-wife Elaine (Catherine Keener), who also happens to be the studio head, then fires him while they're standing on a Hollywood set that replicates a New York street scene and he's bellowing about the spirit of John Cassavetes. Isn't it ironic?

It's an indicator of how flaccid "Simone" feels that even Keener, a hard-edged and distinctive character actress who's almost always enjoyable, flounders around in Niccol's script and ultimately can accomplish nothing with the shallow, underwritten Elaine. Other than Vince, in fact, the only actor who seems fully at home in this film is Evan Rachel Wood (of the late, lamented ABC series "Once and Again") as Viktor and Elaine's precocious teenage daughter.

As Viktor is packing up his gear at the studio, he's accosted by a one-eyed computer geek (an uncredited cameo by Elias Koteas) who insists he's invented the antidote to self-centered celeb actors who put their candy-dish requests ahead of Art. Viktor shoos him away, but some time later -- "Simone" is told as a series of disconnected vignettes, and you can never tell how much time has elapsed or how we've gotten from one thing to the next -- the geek conveniently dies, leaving Viktor a Zip drive containing the program he needs to create Simone.

Ah, yes, Simone. After this blond, leggy simulacrum is inserted into her first Taransky film, a turgid romance opposite Jay Mohr (implausibly cast as a dumb-as-dirt Hollywood leading man), one fawning review describes her as possessing "the voice of Jane Fonda, the body of Sophia Loren, the grace of Grace Kelly and the face of Audrey Hepburn mixed with an angel." Well, that's one point of view. I would describe Simone as Cameron Diaz minus the sass and spunk, mixed with Celine Dion minus the weird vulnerability. In other words, there's no way this simpering, humorless, doe-eyed creation would provoke the kind of hysteria among the media and public that Niccol wants us to swallow here. (In fact, the idea that any movie star could generate such an exaggerated reaction seems oddly out of touch with our jaded age of celebrity overload.)

"I have re-created the infinite nuances of the human soul," Viktor muses to himself while admiring his creation. (An awful lot of "Simone" involves Viktor sitting around talking to himself, or talking to Simone, which amounts to the same thing and makes us feel ever queasier about his character.) Um, no. Simone, who was actually created by the French special effects house BUF Inc., never seems remotely like a human being; she's got less soul than your average "Wild on

Simone wins two Oscars in the same year (her acceptance speech, done by videophone from her "Third World goodwill tour," replete with garbage-eating dogs and background gunfire, is one of Niccol's better moments), is romantically linked to both Viktor and Mick Jagger, becomes a singing star, appears drunk on daytime TV and "directs" her own unwatchable art movie, "I Am Pig." These last two arise from Viktor's Dr. Frankenstein efforts to destroy his creation, which backfire completely and only lead to his own downfall.

This is another of Niccol's clever ideas, but like most of "Simone" it just sort of treads water halfway between funny and true without exactly being either. This movie bears the marks of a lot of previous movies about fame and celebrity, from Frank Capra's "Meet John Doe" to "Network" to "Taxi Driver" to "The King of Comedy" to "Being John Malkovich" and Niccol's own "Truman Show." There's nothing wrong with that, exactly, but Simone is an airhead collection of ones and zeros who can't hang in that company. Her story isn't savage enough to reflect our truly tormented love-hate relationship with celebrity, but it's too hung-up on its half-baked big ideas to relax and goof around.