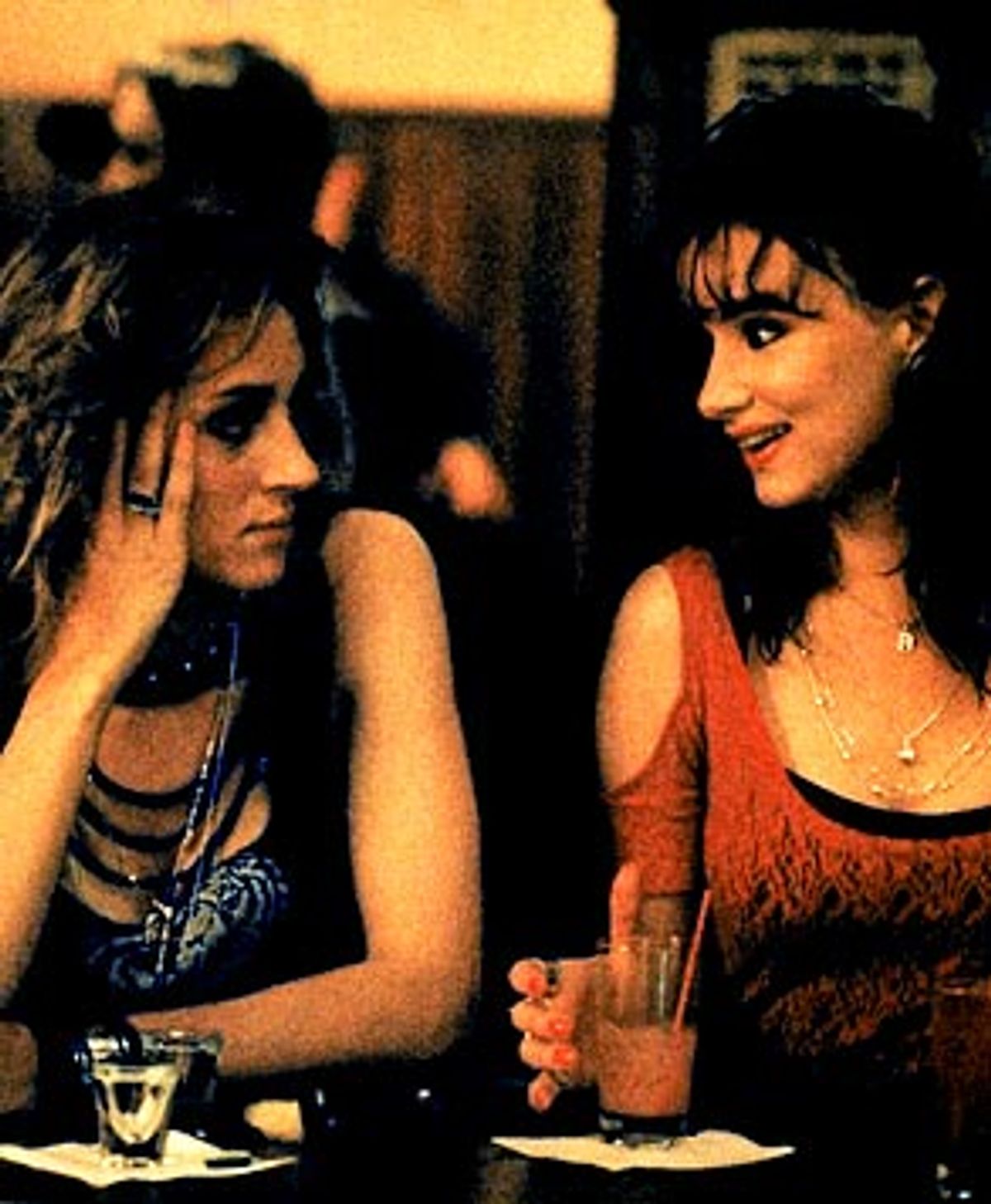 You know the obligatory "chick flick" scene in which the cute, young, unlucky in love but at least they have each other heroines succumb to the rousing rhythms of a Motown favorite and get down, get down until they whip themselves into a girlish frenzy that climaxes with a feather-strewing pillow fight?

That scene never comes in director Mira Nair's latest film, "Hysterical Blindness." The protagonists do dance, albeit separately, but when one of them does, she makes such a wrenching display of her insecurity, desperation and vodka-soaked longing that it makes her friend recoil in unexpected self-recognition, horror and protective love-pain.

"Hysterical Blindness," which was the centerpiece premiere of the 2002 Sundance Film Festival and premieres Sunday night at 9:30 on HBO, is Nair's sixth feature film. Like most of her previous ones (including this year's art-house smash, "Monsoon Wedding," set in her native India), it deals deftly and lightly with themes of caste, class and other social constraints.

A Harvard-educated sociologist and documentary filmmaker who worked with the legendary D.A. Pennebaker before turning to features, Nair is an astute and even-handed observer of human behavior with a gift for creating characters that are at once inescapably culture-bound and thoroughly themselves. Like the sociologist she is, Nair knows how to monitor her characters while reserving her judgment. Like the artist she is, she knows how to do this without ever coming across as detached, condescending or academic. Nair seems rarely to create a character with whom she can't empathize, even if she has to stretch a little to do it. Her characters may be subjects, but they are never specimens.

Based on Laura Cahill's play by the same name, "Hysterical Blindness" is set in 1980s Bayonne, N.J., and centers on the relationships between three working-class women: best friends Debby (Uma Thurman) and Beth (Juliette Lewis), and Debby's mother, Virginia (Gena Rowlands). Debby, still a sulky, rebellious teenager at 30 or so, lives at home while telling herself she doesn't. In classic Greg Brady, every-teen fashion, she has converted her mother's basement into a mirror-lined bachelorette pad for "privacy." Her friend Beth, who got pregnant at 16 and dropped out of high school, lives with her daughter, Amber (Jolie Peters), in a modest apartment nearby.

Debby and Beth have been best friends since high school. Neither their relationship nor their lives have changed since then. We never learn what Beth does for a living, but Debby works in customer service at a nameless warehouse. (It's an unlikely job for someone so prone to social panic that she literally loses her sight under pressure, as she does at the beginning of the film.) Her real life -- or what she hopes will someday become her real life -- revolves around a local dive called Ollie's.

Every night, for what seems to have been at least a decade, Debby and Beth sashay into Ollie's with the kind of wide-eyed, anything-can-happen excitement that most people stop feeling after their first seventh-grade dance. (Ollie's is the same bar, it turns out, where Debby used to go look for her father after he abandoned her and her mother.) Once inside, they make a mad dash for the bathroom to douse themselves in hairspray, gather their courage and devise a game plan. Debby needs Beth to tell her what to order, how to drink it and why. When Beth decides on tequila shots and asks Debby whether they should have them with salt, Debby shoots back agitatedly, "Of course, salt! I don't want people thinking I don't know how to do a tequila shot!" But people hardly think of Debby at all, except as the girl who "does Bayonne" and can't get a boyfriend.

Thurman, in a serious departure from the ice maidens she usually portrays, plays a character so intensely needy and gapingly vulnerable she sucks the air out of every room she enters. Gangly, physically erratic and uncomfortable in her own skin, Debby wears her insecurity like a gash, and it hurts to watch her bleed all over nearly everyone she encounters. She confuses letting people use her with being "cool," and consistently manages to fool nobody but herself. She requires constant, effusive reassurances from Beth ("Debby, you look soooo hot!") before she can even bring herself to walk into Ollie's.

Lewis, who does a mean Jersey girl, plays Beth with a charming blend of ditziness, patience and compassion. Debby is harder on Beth than she deserves, but the compassionate Beth coddles her best friend and tries to keep her from harm. This means rarely telling her the truth, even when she needs to hear it. When Rick, a cute construction worker that Debby becomes obsessed with after a single short conversation, ignores her the second time they meet, she turns an anguished face to Beth and says, "My mom thinks my problem is that I'm too aloof." Beth looks at her with wide, disbelieving eyes. "Aloof?" is all she can say.

Thurman's portrayal of a walking emotional wound is riveting; you can't look away even though you want to. Lewis, on the other hand, plays a character whose quiet complexity takes some time to come through. When it does, it's a marvel of subtle precision. Beth is the kind of girl whose over-the-top accent, huge hair and clownish makeup make her seem instantly dismissible. As the film progresses, however, her resilience and unassuming complacency begin to suggest a kind of Zen depth. She has few expectations and therefore few disappointments.

There's also a melancholy quality to Beth that comes from the way other people's expectations and demands are imposed on her. In one scene, she tells Debby how her daughter Amber's father proposed to her when they were 16 and her parents made her give the ring back. "He really, really wanted us to get married ... But it would have been stupid to get married at 16, right? ... I don't know ... Sometimes I think it wouldn't have been so bad."

If Debby's arrested adolescence is all about insecurity and anguish, Beth's is all about the mindless fun she keeps trying to have, with little success. She leaves her kid alone at night to go to Ollie's, where she sits around bickering with Debby and getting bored. (In a poignantly funny scene, Amber calls Virginia to see if she wants to watch TV with her, while Beth sits alone at the bar, abandoned by Debby.) Unlike Debby, Beth harbors few illusions about what she's likely to find at Ollie's -- and when she does they are fleeting. Spotting Rick for the very first time, she yells across the room, "Hey, you want to slip on some slime?" Horrified, Debby lashes out at her, "You'll never get a guy that way!"

But Beth may be developing a romance with the bartender, and it's Debby, after all, who can't distinguish sex from love and who finds it impossible to relate to men. (A few nights later, having gone home with Rick, Debby ends an awkward silence by blurting, "I give a fabulous blow job!") Rick clearly never has any intention of getting involved with Debby. Yet despite all the cruel evidence to the contrary, Debby refuses to see her brief and sordid few encounters with him as anything but "something special." Beth can only look on in horror and brace herself for the imminent crash.

To complicate matters, Virginia begins a relationship with a sweet, retired widower named Nick (Ben Gazzara) and Debby reacts to the news like a wounded animal. Still reeling, half a lifetime later, from her father's sudden departure, Debby takes an instant dislike to Nick. She claims it's because he's bound to hurt her mother, but it's obvious that the comparison between her "relationship" and Virginia's is too much for her to handle.

As Debby careens even more violently between feelings of jealousy and anguish, her mother blossoms. Rowlands is amazing to watch as a woman who has long since stopped looking who falls suddenly and unexpectedly in love. She plays Virginia halfway between eminently sensible and adorably daffy; watching her dance, cautiously but tenderly, with a melancholy Gazzara, you can't help but feel that love is squandered on the young.