A recent study says that parents who hold their stillborn infants may be traumatized by the experience. Yes, the moments I spent with my dying newborn were the most painful of my life -- but they were also the richest. 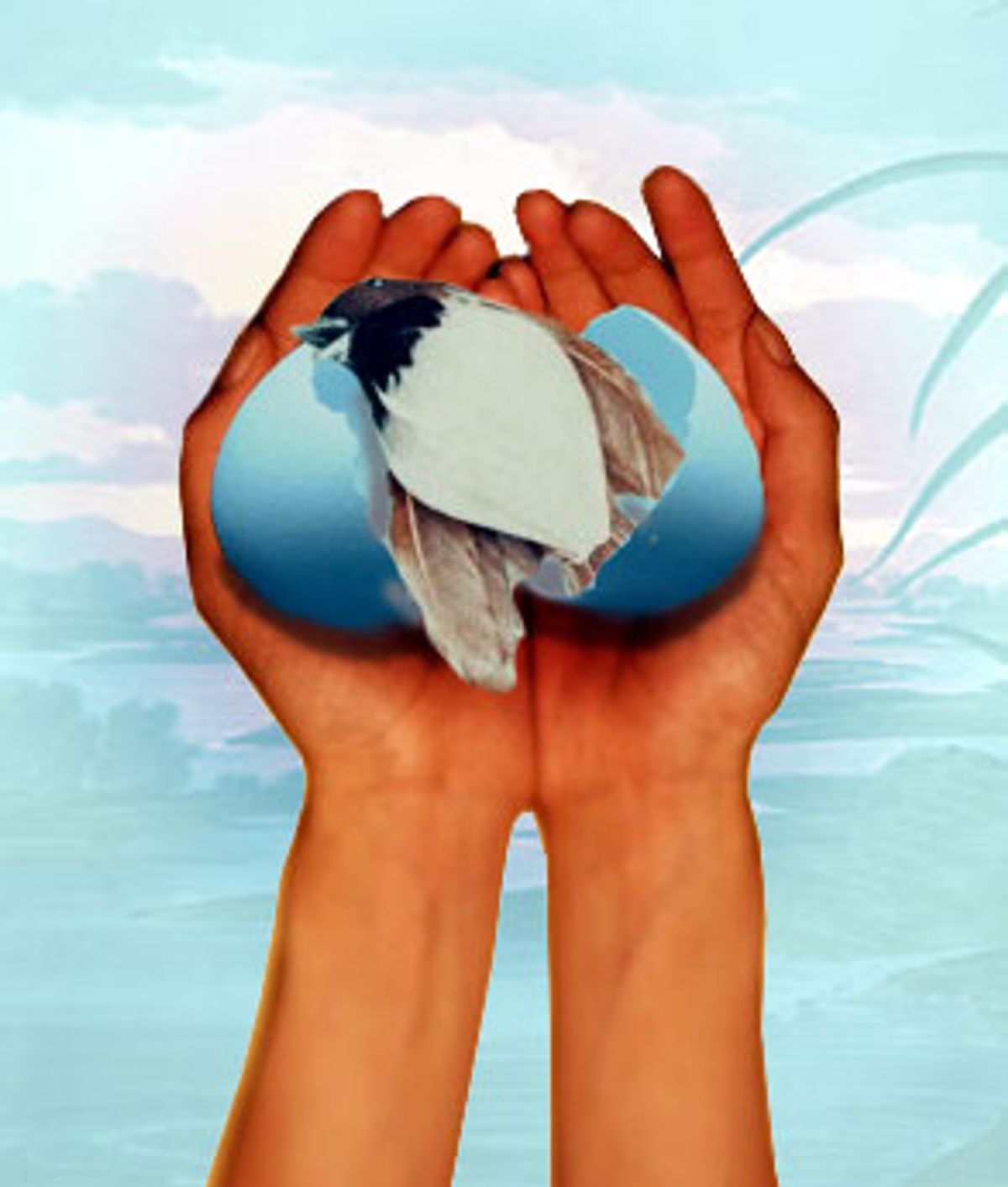 It happened last December at a holiday party. I had mustered enough courage to go out into the world and meet new people. My fiancé had promised that if I started to panic, we could leave immediately. I took a deep breath, shoved my shaking hands into my jacket pockets and entered the party with a feigned smile.

In my previous life, before my baby died, I was a social butterfly. Now, as I stood in this dimly lit apartment, I found myself speechless and scared. What if someone showed up with an infant? After a quick survey of the room, I noticed that the closest thing to a monster was a heavily pregnant woman standing several feet away. My heart started racing but I decided to try to stay calm and wait out the evening. It had been months since we'd gone out, and I wanted to believe that almost five months after Anna's death, I could function in a social situation.

Everything that had transpired during my daughter's month-long life was still so palpable that I had difficulty stepping out of the nightmare and into the moment. Small talk seemed meaningless and false compared to the raw memories that I was still reliving: The sickening fear when I noticed she wasn't moving inside me. The emergency C-section when her heart rate decreased. The suction sound followed by silence as the doctors pulled my gray-blue unbreathing baby out of the small incision in my abdomen. The hushed whispers of the doctors as they worked to revive an otherwise stillborn baby.

There were the weeks spent in the neonatal intensive care unit with Anna hooked up to tubes and wires. Then the neurologist's devastating report that 90 percent of Anna's brain was irreparably destroyed due to a freak accident in the womb. Finally, the prognosis of severe cerebral palsy and an utter unawareness of her own existence. Our decision to let our terminally ill baby die. Her slow but peaceful death at home.

All of these memories flooded my brain and made small talk trivial, if not impossible. Surreptitiously I slipped another Xanax into my mouth.

A slender woman with frizzy black hair looked at me. Did I know her? Did she see me pop the pill? I smiled blankly as she walked in my direction. Then I recognized her. We developed photos at the same darkroom. I felt relieved. We had something in common to talk about.

We greeted each other. Then she asked a seemingly benign question: "Have you been doing photography long?"

I could have kept it simple and said, "No." But that didn't explain the reason I started or why I continue. Photography has been a lifesaver for me. In the darkroom I can slip into another reality -- free of grief -- as I watch images magically appear from blank paper. I feel like myself again, if only for a few hours.

The woman's face went pale. She stared at me as the words hung in the air between us. Then she mumbled something unintelligible under her breath, turned and walked to the other side of the room to join a group of people, none of whom, presumably, were talking about dead babies.

I was so surprised by her reaction that I almost started laughing. Shouldn't I, not her, have been speechless and uncomprehending? For me, speaking about Anna is a release, a way to maintain her memory. To remain silent and pretend she never existed feels false and claustrophobic. While I did not expect this woman to relate, her rudeness and my new role as social pariah stunned me.

Since Anna's death, I have discovered just how common this woman's reaction is. As psychotherapist Sukie Miller explains in her book "Finding Hope When a Child Dies," the inclination to deny the death of a child is rooted in our very language. "When your husband dies, you become a widow. When your wife dies, a widower," she writes. "Children who lose their parents are called orphans. But we have no name for the parent who loses a child ..."

This silencing, according to Miller, has grave consequences for the bereaved parent. "The fact that there is no name for the one who has lost a child is of enormous consequence: The nameless live in a kind of limbo. They still exist, but in a new stratosphere where their namelessness effectively isolates them from the rest of the world."

Our culture's need to erase or lessen the magnitude of painful events by trying to deny them is understandable. Caring for Anna as she died was by far the most difficult and isolating experience of my life. Ironically, it was also the richest and most life-affirming. Amid administering medicine rectally to control her seizures, soothing her as she choked on the smallest amount of water, and listening to her agonized breathing as her body began to break down, I got to hold our daughter, to kiss her and smell her. I got to feel, if only for a month, the purest form of love and heartbreak.

It has been more than a year since she died, and I continue to experience the long reach of grief in every part of my life; but the pain has lessened and I have positive memories of the short time I spent with my daughter. I have photographs of her father holding her, of our little family sitting together on the couch in the hospital, and I have the little blue hat that she wore.

For women whose babies are stillborn, the evidence of a real baby is not so tangible even as they grieve their absence. Having the opportunity to see and hold their stillborn babies is frightening and magical at once. Being provided with hand and footprints of the baby, and photographs, can be essential to their ability to come to terms with (not forget) their baby's existence.

And yet, a recent study by psychiatrist Patricia Hughes at St. George's Hospital Medical School in London, published in the Lancet medical journal, now potentially threatens a woman's future right to see or hold her stillborn baby.

Using a group of just 65 women (some 26,000 babies are stillborn each year in the United States alone, or one in every 138 births, according to the National Center for Health Statistics), the study ostensibly sought to determine whether the now common practice of encouraging mothers of stillborn babies to hold their babies had any "beneficial effects on the psychological health of mother and next-born child."

While Dr. Hughes and her colleagues conceded that their methods were flawed -- how is it possible to predict the impact on a woman's long-term mental health through short-term observation? -- and that a follow-up study is necessary, they concluded that holding the babies had no beneficial effects on the mothers because the women in the study appeared to be upset, disoriented and shocked.

"Our overall impression was that most mothers were shocked, and had no clear plan of how to manage the situation: they simply went along with whatever was expected of them," Dr. Hughes and her colleagues wrote in the Lancet. "[W]e speculate that sometimes, seeing and holding the dead infant further traumatises a woman who is already intensely distressed and physically exhausted."

Numbers and methods aside, the most fundamental flaw of the study is the implication that exhibiting grief and anxiety when faced with a stillborn baby is somehow unnatural, that negative reactions to a baby's death can and should be avoided, and that one way to avoid pain is to keep the baby out of sight, to prevent any memories from forming, and to not talk about the tragedy.

These findings directly contradict more than 30 years of well-established medical and psychological evidence indicating that seeing or holding her stillborn baby is integral to a mother's ability to work through her grief.

"Just as in the usual bonding process, there is a transformation from one's attachment to an unseen, 'inside' baby to a visible touchable 'outside' child," wrote Irving Leon and Erna Furman in their 1990 book "When a Baby Dies: Psychotherapy for Pregnancy and Newborn Loss."

"Parents are better able to accept the reality of their child's death if they view the baby's body," they continued, citing numerous scientific studies that corroborate this. "The mother's heightened attachment to her unborn child as he begins to move within her body may make the touching and holding of his lifeless body especially important in facilitating mourning.

"Viewing the dead baby provides a tangible form through which her love for her unborn child can be expressed or mourned," they concluded. "It is not surprising, therefore, that virtually every researcher or clinician who has worked with victims of perinatal loss has recommended that the parents be given an opportunity for contact with the dead baby in order to facilitate the grieving process."

In promoting the idea that it is bad for women to see and hold their stillborn babies, the Lancet study provides a credible excuse to medical personnel and clergy who would prefer to not face this difficult situation. As a result, it could have grave consequences for future bereaved mothers who give birth in hospitals that have eliminated the option.

Like it or not, the anxiety and grief that result from losing a baby don't simply disappear because you try to suppress them. Nor should they. However painful it might be, the grief feels right because it is equal in magnitude to the loss of your baby. The only way to move forward and rebuild your life is to accept that your worst nightmare really did happen, and to find ways to honor your baby's memory.

Anna was a beautiful, perfectly formed baby. Looking at the photographs of her, which we keep around the house, you can't tell that anything was wrong. Neither her sweet smile nor her peaceful sleeping face betrays the gruesome fact that most of her brain was permanently destroyed. Just the other day, a new friend saw her photo and cheerfully said, "Whose baby is that?"

As I prepare for the birth of my second baby, a boy, I am no longer gripped with the searing pain of her loss -- I have accepted it. I find myself smiling at her photograph as I imagine telling my son about his older sister, a remarkable little baby who changed my life.

One of the most unbearable aspects of losing a baby is the fear that she will be forgotten -- but forgetting is impossible. When the growing baby inside you is unexpectedly stillborn you don't simply forget and move on. The memory of your baby takes shape inside you, filling the void of the physical baby who once inhabited your womb.

Being able to ground these memories in the acts of seeing and holding our babies, being able to talk about them, enables us to come to terms with the loss, work through our grief, move forward with our lives, and continue to honor our babies in a culture that prefers to defer pain and is ill-prepared to deal with death.

To not have this, to not have had the opportunity to touch or smell or hold that baby -- even when it is born dead -- would be yet another terrible loss.