When "Friends" meet the Lord

All is not as it seems in "Contest Searchlight," Comedy Central's mockumentary series about the making of a bogus sitcom starring Peter Gallagher as Jesus. In chaps. In New York City. 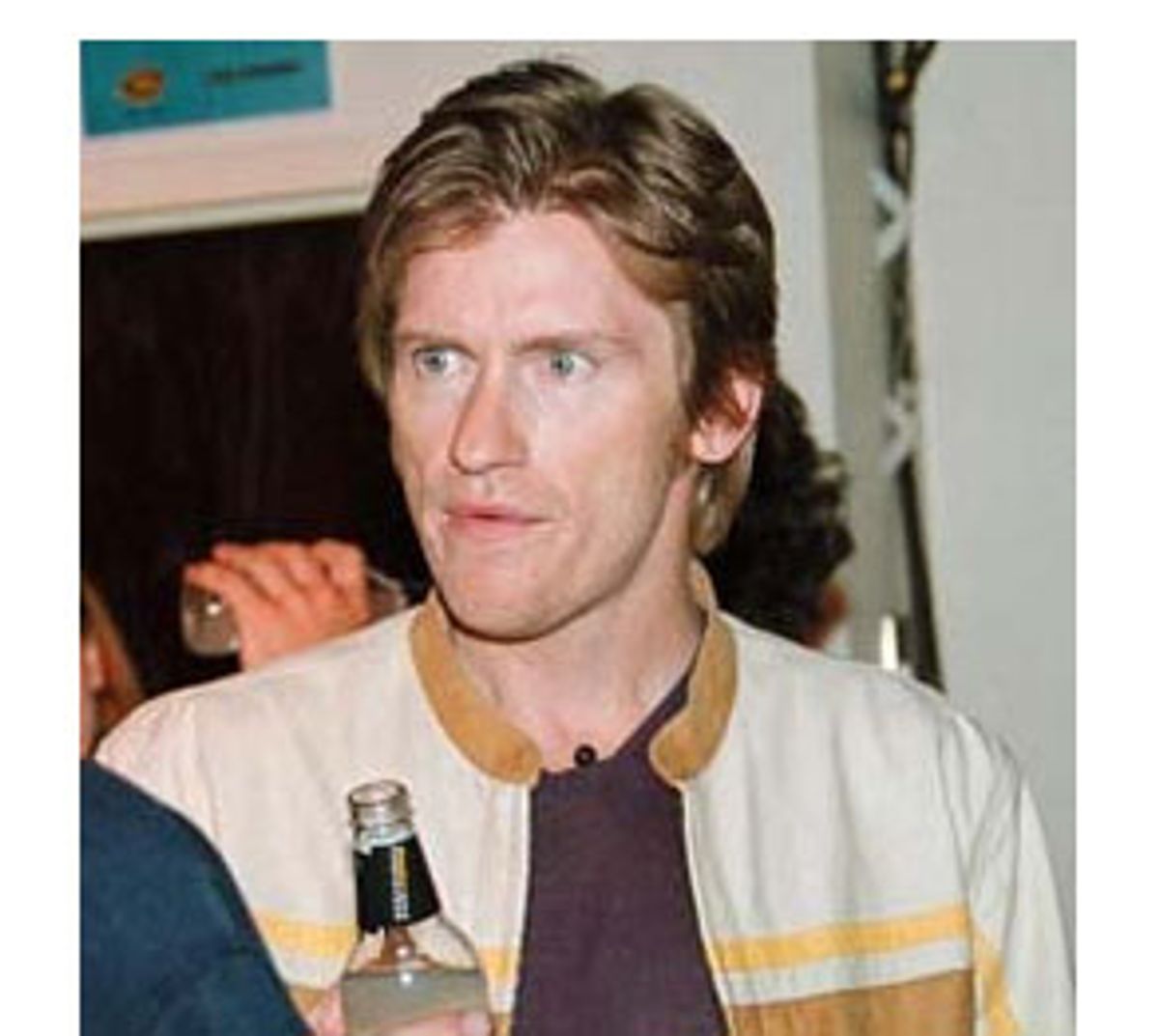 So what, exactly, is the deal with "Contest Searchlight"?

"There's been some confusion in TV viewer-land," a Comedy Central spokesperson admits, doing little to clear the confusion up. Comedy Central promoted the show (which premiered Aug. 14) quietly and earnestly, making it sound like a shameless rip-off of HBO's "Project Greenlight." Which it is, only not. "Contest Searchlight" is a wholly fictional, giddily cruel smartass's-eye view of the HBO show, which last year took us behind the scenes for a glimpse at what a clueless neophyte might do with a million dollars of Miramax's money: Spin it into a theatrically released after-school special, become puffy with entitlement in the process and fall flat on his face. Pete Jones' completed film, "Stolen Summer," grossed $134,000 at the box office.

Looking back, the promos for "Contest Searchlight" were a dead giveaway. They featured a smiling and suspiciously sunny Denis Leary gushing over the chance to give an aspiring writer-director the chance to make his or her very own sitcom. The press release Comedy Central sent out was equally straight-faced and sincere. "Denis Leary and Comedy Central search for a shining light when 'Contest Searchlight' premieres." Soon it was being reported that Miramax's lawyers had sent a threatening letter to Comedy Central and that even Harvey Weinstein was angry about the show's similarities to "Project Greenlight."

In fact, Miramax did send a letter asking for more details on the show early on, after it was announced at the TV critics' showcase in Pasadena earlier this summer. But the studio neither threatened legal action nor took any further steps after it became clear the show was a parody. "We can take a joke," a Miramax spokesperson says. If anything, Miramax execs seem more annoyed that "Contest Searchlight" has milked the nonexistent Miramax "controversy" for all it's worth.

Although it premiered to high ratings (according to Comedy Central, it attracted 1 million more viewers than that network's prime-time average), "Contest Searchlight" would still probably benefit from being promoted as the spoof that it is. Another obstacle for the show is that it's an inside joke that relies heavily on the assumption that you watched "Project Greenlight" and that it drove you over the edge.

The show's "finalists" are actors (the Comedy Central executives featured, however, are real, with the possible, unconfirmed exception of a suspiciously bouffant-haired "creative executive"), their ideas are beyond terrible and the result is a hilarious spoof of the recent "win a career you don't deserve" offshoot of reality TV. If you did watch "Greenlight," the first four episodes of "Searchlight" (the third airs Wednesday night and all four will run back-to-back on Sept. 8; the resulting "sitcom" will "debut" in January), which "document" the beginning of the show, the party for the finalists, the pitches and the shooting of the "sitcom," are milk-out-your-nose funny.

In the first episode, Leary is surprised by the cameras in his office and quickly tries to back out of the project. When Jon Stewart, who was to co-host the show, flees in terror, Leary begins making calls. Matt Dillon, Gina Gershon, Ray Romano and "the fat guy from 'Swingers'" all decline to play Ben Affleck to his Matt Damon, so Leary decides on "live body" Lenny Clarke, his former costar on the short-lived ABC series "The Job."

Clarke: "When Denis called me and asked me to be co-host of this wacky show we're going to do that included giving young people a chance and on top of that being a co-producer, I said, 'It's like winning the lottery!'"

Next, Leary and Clarke attend a "press junket" to describe "Contest Searchlight" and defend it against accusations that it is a rip-off of "Project Greenlight."

"Let me tell you something," Leary adds. "If I was doing that 'Project Greenlight,' and that guy, what's his name, Pete Jones, started doing that scream he did to get that crane shot? ... I would have put duct tape around his entire body and thrown him in the trunk of the car for three hours."

The set of the spurious junket is plastered with product placement ads for Mike's Hard Lemonade, as is the venue for the party for the finalists that follows. As the 10 goofy finalists mill around the party, doing shots, greeting Comedy Central execs and feeling validated, Clarke remarks:

Leary then proceeds to get wasted, and pretty soon is awash in anger and self-pity. Asking Clarke why he doesn't have his own show anymore, he lashes out against George Lopez. "A Mexican has his own fucking sitcom and we got nothing!"

The finalists are chosen -- seemingly at random, save for one girl, Amber, for whom both Leary and Clarke obviously have the hots -- and the next day, they are brought in to pitch. Amber pitches a show about four friends in New York who "meet religiously every Sunday and they talk about philosophy and they talk about the world around them ... and then Jesus comes."

"Quite frankly," says Clarke, "I was thinking about how I could get into Amber's pants, and I wasn't really listening to the pitch. It was only when she mentioned Jesus and [Comedy Central executive] Lou Wallach nearly choked on a roast beef sandwich that I realized what was going on."

Next, Mike pitches an idea called "Shews," which is about five roommates who live in the Shews Building in New York, and is somehow about walking around in other people's shoes. A third guy, Carmine, pitches an animated series about five guys sharing a beach house, but mostly spends the pitch meeting trying to unload some hats and posters for a movie he made.

"I never thought we'd be in that room so long," says one of Leary's producers as they try to pick a winner. "It just proves to me that the idea of a contest to give some aspiring TV writer a shot is a giant waste of time."

In the end, Leary, Clarke and the Comedy Central executives decide to go with the "Shews" concept -- only incorporating Amber's Jesus into the household. The next day, Leary hires Amber to be his "eyes and ears" while he's away from the set and checks into rehab.

It's hard to imagine that the resulting sitcom, "Shews" with Jesus, will be funnier than watching "Contest Searchlight" winner Mike Lombardi pull one Pete Jones moment after another in preproduction and on the set. Anyone who remembers Jones' instant imagined social and artistic parity with people like Emma Thompson and Harvey Weinstein will appreciate his insisting on calling A-list actors for his jury-rigged sitcom and forcing Peter Gallagher, eventually recruited to be the show's star (and consistently described as "the best actor in New York") to wear chaps.

If we learned anything from "Project Greenlight," it's that few things are more amusing than a self-important talentless hack, and one of them is a self-important, talentless aspiring hack who bites the hand that feeds him. "Contest Searchlight" is dead-on in its mockery of a Cinderella story gone bad. If things continue in the vein of "Project Greenlight" and "American Idol," the next generation of celebrities may be thrust upon us after popping off a lucky bottle cap or a winning yogurt lid. We can only hope Denis Leary will be there when that happens.