It's definitely time for a nasty-good prison boxing flick. But despite Ving Rhames' muscles and some butt-kicking action, this isn't it. 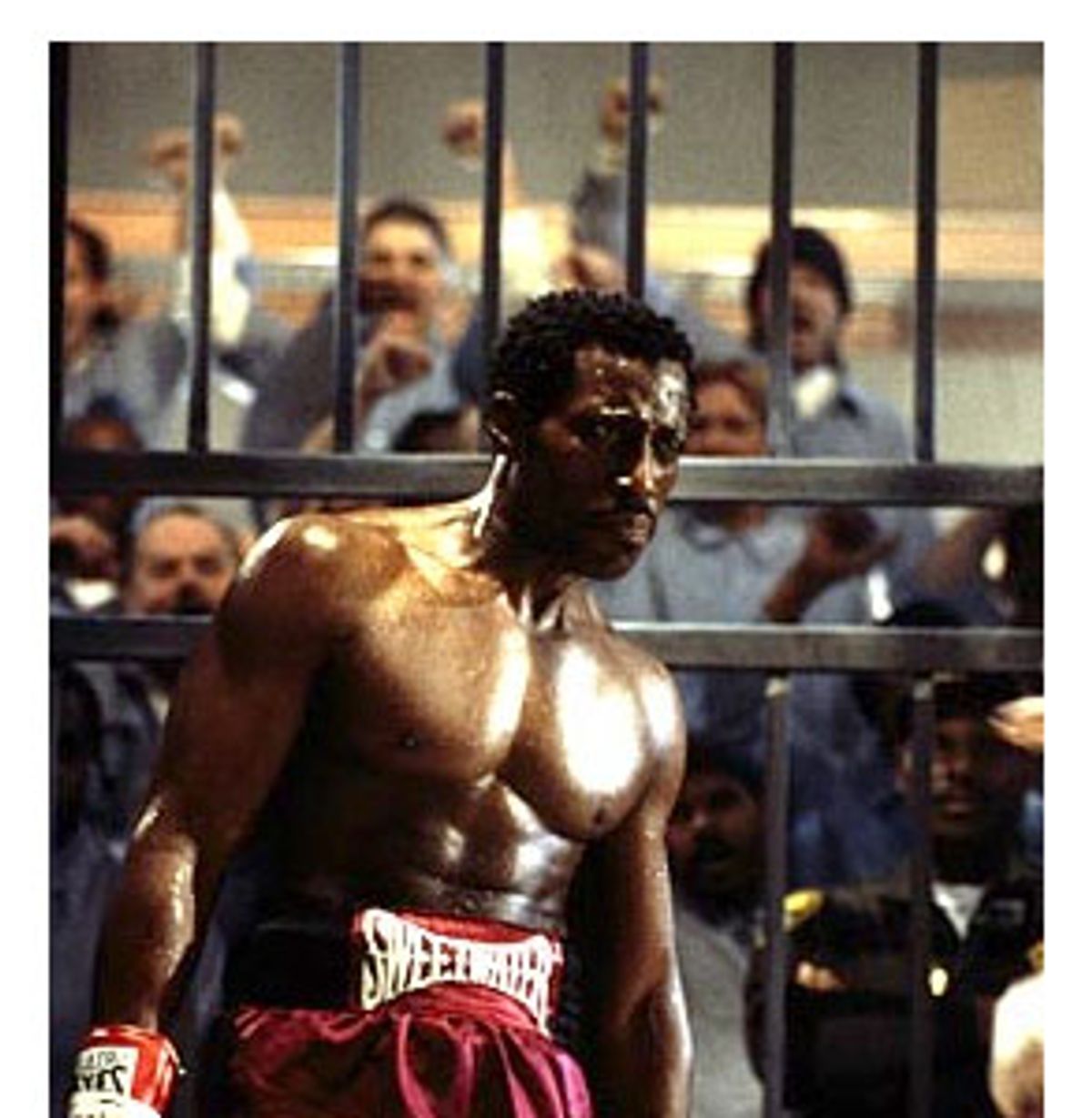 It's a special talent, and one that's underappreciated these days, to be able to make a good B movie. Walter Hill's prison-boxing flick "Undisputed" could have been a great B, but it represents a failure of nerve. "Undisputed" hovers in that indefinable never-never land of the almost-B's.

The picture is entertaining and brutal (it's a movie about tough convicts fighting, after all), but it can't figure out what kind of movie it would like to be. Its tone slips and slides carelessly, particularly in a curious section in which a rape victim appears tearfully on TV -- Hill hasn't bothered to figure out how he wants us to feel about her (or if he has, he misfires completely in the way he presents it).

Even the movie's look is off: Shot by Lloyd Ahern II, it shows us a prison world softened by a haze of golden dust motes, like an arty-slash-gritty AT&T commercial. ("Reliable long-distance service from your house to the big house!") In trying to be more, "Undisputed" ends up being something less -- and, worse yet, a "something" whose mission isn't quite clear from scene to scene.

Wesley Snipes is Monroe Hutchens, an inmate at a California prison that goes by the name of Sweetwater (not to be confused the rock band in "Almost Famous" -- that was "Stillwater," which would make a much less poetic name for a prison). On the outside, he was a pro boxer who killed a man with his bare fists in a crime of passion. Inside, he's the undefeated champ in the illegal matches set up by the beady-eyed prison guard (is there ever any other kind?) played by Michael Rooker.

Into the prison goldfish pond slips brawny tadpole James "Iceman" Chambers (Ving Rhames), the heavyweight champ who has been convicted of a rape (à la Mike Tyson) which he claims, unconvincingly, he didn't commit. ("I ain't no punk-ass rapist. She wanted it!" he asserts -- the mark of a guy who has clearly spent a lifetime learning to interpret nuance.)

Chambers, a bully plain and simple, doesn't plan on being the prison newbie for long: He marks his territory by first taunting Monroe in the prison cafeteria and then landing a good, solid punch. "I'm not an athlete -- I'm a gladiator" is Chambers' motto in life, in the ring and certainly behind prison walls.

Monroe, on the other hand, is the kind of guy who builds pagodas out of toothpicks in his spare time (he claims he stays sane in prison by living inside his head). He doesn't want to be baited by Chambers, not least because he doesn't want to be the pawn in Chambers' grab for macho territory.

But Mendy Ripstein (Peter Falk, who knows just how seriously to take the movie he's in, and sends it up brilliantly and hilariously), an aged, crinkled mobster and boxing aficionado doing time for tax evasion, finally sets up a match between the two. Mendy's initial plan is to stage the match the old-fashioned way, with bare knuckles, but he's eventually brought around to the idea of 6-ounce gloves, which protect the boxers' hands only minimally.

Hill keeps "Undisputed" moving swiftly, and he's intuitive about many of the right things. (He shows us Rhames' cartoon body, with its ham-hock biceps, as a kind of rough visual poetry -- it's beautiful and a bit funny at the same time.) But the picture doesn't have the depth and raw mournfulness of one of Hill's best movies, 1992's "Trespass"; nor does it have much of the freewheeling style of another one of his great B movies, "The Warriors" (1979). It's stuck somewhere in between, half-ambitious but wholly uncertain about its aims.

Snipes is so Zen he's barely in the movie at all: He's at his best, and most physically and emotionally present, in his scenes in the ring, which Hill stages clearly and paces nicely. The boxing scenes are the places where the movie makes the most sense, not because they're where the movie plays out its ancient, tired themes of masculine pride and honor, but because they show such a clear understanding of the lyrical violence of boxing, which is so immediate it renders cheapo psychology meaningless. Why Chambers and Monroe have stepped into the ring ceases to matter once they're actually in it, and Hill captures the animosity between them in the glowering of their eyes and the raw-meat impact of gloves on skin.

But elsewhere, you just wonder what on earth Hill thinks he's doing. We see the woman Chambers has been convicted of raping being interviewed by a fawningly sympathetic TV journalist; she breaks down and delivers a tearful litany about all the money she's had to spend on lawyers and psychiatrists.

The audience I saw the movie with laughed at her, and it was easy to see why. The movie gives us no reason to believe in Chambers' innocence. So why suggest that this woman is a flimflammer, a spotlight hog or even just a crybaby? It's insulting to her, and it doesn't change Chambers' nature as we've already seen it: We've already taken the measure of his belligerence, and for the purposes of a B prison movie, that's just about all we need to know. What's the point of presenting the woman he raped as a joke?

There's no shame attached to making old-fashioned genre entertainment, and "Undisputed" would feel much more right and natural if it had been treated as exactly that. Hill has made both terrific movies and just highly entertaining good ones; why does he go to so much trouble to make a movie that melts like the memory of a snowflake 10 minutes after you've left the theater?

"Undisputed" takes place in a prison and has boxing as its focal point -- you can't get more disreputable than that. So why aren't we allowed to just revel in the cheap, stylish glory of it all? A B by any other name should smell as sweet -- but it just doesn't.