A new PBS documentary delicately explores the lives of "100 percent American, 100 percent Arab" citizens, who find themselves permanent outsiders in a season of war. 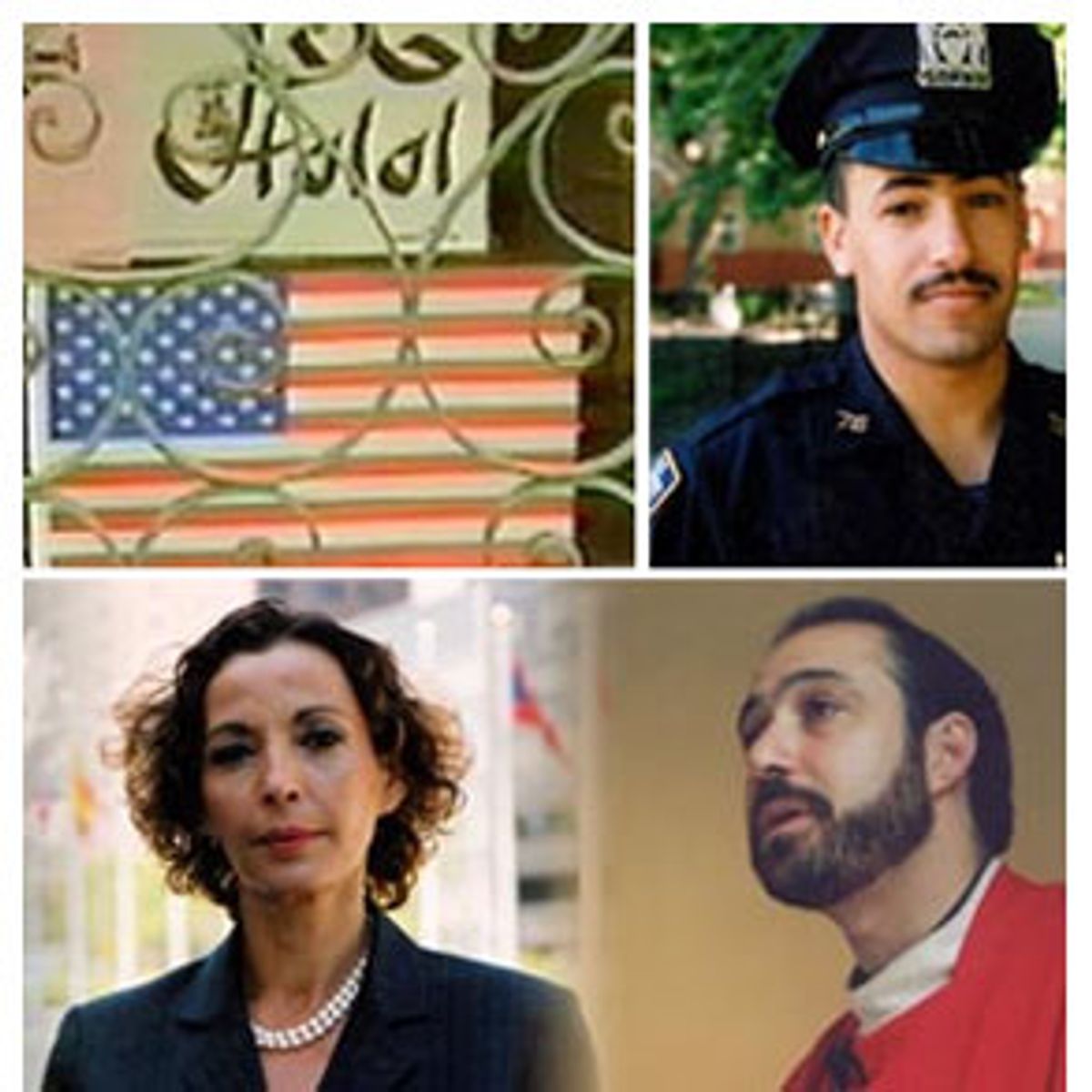 One of the most paradoxical aspects of the modern immigrant experience is that it no longer presupposes the permanent physical dislocation it once did. Thanks to the easy availability of air travel, the telephone and television, the modern émigré's ties to his country of origin tend to be fluid and spatial, rather than static and temporal. It's now not only possible for a Lutheran pastor in Brooklyn to watch the bombing of his Palestinian village on the Arab-language news while talking on the phone to family members there, it's unremarkable.

Technology allows immigrants and their descendants to straddle two cultures simultaneously in a way that couldn't have been imagined a century ago. And thanks to technology, their cultural identities can be continuously renewed and refreshed, and are therefore less likely to recede into a collectively imagined, sentimentalized and bygone past, as they did for so many 19th century immigrants. To watch Pauly Walnuts of "The Sopranos" "return" to the Italy he's never known and find that he's a fish out of water is to understand that being Italian-American is, at this late date, a lot more about being American than it is about being Italian.

But as any recent immigrant who retains close ties to his country of origin while at the same time adapting to his new one knows, it is impossible to span two cultures at once without eventually becoming an outsider to both. The PBS documentary "Caught in the Crossfire: Arab Americans in Wartime," which premieres Wednesday, Sept. 4, at 10 p.m., sets out to show how the lives of three Arab-Americans have changed since Sept. 11. In the process, it winds up exploring instead what it means to be a permanent outsider and a psychological exile.

The hourlong documentary, produced by David Van Taylor and Brad Lichtenstein ("Local News"), looks at the lives of Khader El-Yateem, a Palestinian Christian and a pastor at the Salam Arabic Lutheran Church in Brooklyn, N.Y.; Raghida Dergham, a Lebanese correspondent for the Arabic newspaper Al-Hayat and a regular guest on CNN; and Ahmed Nasser, a New York police officer originally from Yemen who was stationed at ground zero a year after the terrorist attacks.

At first glance, the film's choice of subjects is disconcerting. By focusing on an Arab Christian, a professional, independent Muslim woman and an Arab-American cop who ostensibly engaged in the search for al-Qaida operatives while his American-born family was harassed on the streets of Brooklyn, the filmmakers give the impression of trying a little too hard to defy expectations or defuse stereotypes. The point of these seemingly odd choices is slow to come across. Eventually, however, it does.

As a pastor, Al-Yateem reaches out to the entire Arab-American community, both Christians and Muslims, and becomes deeply involved in helping them deal with things like loss of family, loss of jobs, harassment, detainment, deportation, etc. As a cop, Nasser also spends much of the time reaching out to the Arab-American community, informing people of their rights and protecting them from harassment. As a journalist who both writes for the Arab press and appears on American television to discuss Middle Eastern affairs, Dergham is determined to explain the Arab viewpoint to the American public and vice versa. The film's choice of subjects also makes an interesting point about the potential dangers of believing in a "typical" member of such a vast and diverse group of people.

Because "Caught in the Crossfire" doesn't employ voice-over narration and relies only on what the characters say on camera in response to the filmmakers' questions, the filmmakers' point of view can only be gleaned from the editing. "Caught in the Crossfire" seems primarily interested in presenting the perspectives of workaday Arab-American civilians who are as baffled and traumatized by the events of last fall as everybody else. The film opens with images of the World Trade Center in flames while, in voice-over, two Arab newscasters try to figure out what is going on. These images are followed by scenes of the devastated ground zero site, accompanied by selections from a George W. Bush speech about enemies who "hide in shadows" and good vs. evil.

The film also provides some interesting insights on the complexity of the contemporary immigrant experience. El-Yateem, for example, was a reluctant emigrant, sent to Brooklyn by his bishop. Despite his original misgivings about leaving his home, he has established himself as a central figure in the community. As an Arab, an Arab Christian and a Palestinian, El-Yateem carries his sense of exile with him, no matter how firmly ensconced he becomes in a community. As his mother-in-law says, when she is asked if she'd rather return to Palestine to be with some of her children and grandchildren, or stay in New York to remain with the others, "Our home is there, our home is here, it doesn't matter."

Nasser's mandatory conscription in the Yemeni army at the age of 14 robbed him of an education. Now his children wear U.S. flag T-shirts, but his Brooklyn-born wife, who wears a head covering, was confronted by a stranger who yelled, "Go back where you came from, you fucking terrorists," on the day of the attacks. Her sister, who lives in the predominantly white Brooklyn neighborhood of Bensonhurst, wants to leave New York after neighbors egged her house.

Nasser has helped found the Muslim Officers Association, where he and other Arab-American cops talk about doing community outreach. "I see people who get hurt and don't know their rights in this country," he says. Still, he worries about how to approach them, because, as he says, "I come from a country where a cop used to scare the heck out of me."

Dergham, a single mother (at least, if there is a man in the picture he is neither seen nor mentioned) who is never seen without full make-up, rarely seen without a cigarette and often seen elbowing her way through visiting dignitaries' entourages in pursuit of an interview, or taking Western and Middle Eastern diplomats to task, emigrated from Lebanon in 1970 and put herself through college by waiting tables. As a woman, she knows that her professional field would have been closed to her in her country. "Had I stayed in Beirut, I don't think I would have grown into the person I am now ... The United States was the key that would bring about my freedom, my independence, the life I imagined I would lead."

But Dergham, whose mission it has been to present both Arab and American viewpoints fairly, has won critics -- and worse -- on both sides. After sending her daughter off to school from their well-appointed Manhattan apartment, she reveals that she is being tried by a Lebanese military court, and that her passport has been revoked. "I thought that I would be honored, that they would thank me," she says of the Lebanese government. "Instead I am charged with treason."

A recent piece in the New York Times criticized "Caught in the Crossfire" for "presenting only one facet of the dynamic: the Arab-American as victim." In the writer's opinion, "In trying so hard to make the audience like its major characters, and ... to accept Arab-Americans as decent folks just like us, the film actually strips those characters of the complexity of emotion and experience that makes them fully human." The piece also criticizes the filmmakers for never asking their characters to comment on potentially controversial or sensitive subjects, such as Osama bin Laden's claim that he was acting for all Muslims when he perpetrated the Sept. 11 attacks, or the conspiracy theories about Israeli involvement with Sept. 11 that have some traction in the Arab world.

At times, you wonder whether the filmmakers aren't protecting their subjects from voicing opinions that could come back to haunt them. It's easy enough to see why people might be reluctant to discuss the finer points of their divided allegiances on national television. When, in the first few moments of the film, Nasser says uncomfortably, "Some people think all Arab-Americans should apologize for what happened here. If that's going to help, I do apologize for what happened," his feelings, as well as the larger psychological effects of the attacks on the Arab-American community, are pretty evident.

The women who come to the Salam Arabic Lutheran Church to discuss their children's problems after the attacks describe obsessed, traumatized and fearful kids. Some mothers themselves fear coming into Manhattan -- not for fear of harassment so much as for fear of another attack. People talk about others they know who have been deported, detained or lost their jobs. Children leaving an Arab school are harassed, but when the teachers call 911, the police take a half-hour to arrive. "Because this is an Arab or Islamic place, I don't see anybody coming to the rescue," says a frustrated faculty member.

The days when being an immigrant in this country -- or in any wealthy, industrialized Western nation -- meant showing up at Ellis Island with a suitcase and a dream are gone for good. The world is too small and information too readily available for that particular brand of innocence and unconflicted allegiance to spring eternal. As much as it remains motivated fundamentally by economics, modern-day immigration often owes more to political instability, war, corruption and terminally soft currencies than it does to old-fashioned motivators like starvation. And as the citizens of developing nations and war-torn regions understand, no country is an island anymore. It's impossible to subtract global economics and politics, and their effects on developing nations, from the equation.

Immigration no longer presupposes total assimilation, but some degree of assimilation is inevitable and is indeed the point. Most immigrants and recent descendants of immigrants find themselves trying to broker an uneasy peace between the two. As Nasser says toward the end of the film, "I know I am American 100 percent, I also know I am Arabic 100 percent. I can't change where I came from. You know what? I'm just like anybody else who came from Italy, France, Germany, Britain, any country in the world. I'm an immigrant, fine. But I'm also an American, and this is my home."

To be bicultural is to be culturally bipolar in many ways. Sometimes, the conflict is internal. At other times, external. At times like these, immigrants find themselves teetering precariously on the hyphen, trying to remain still, trying not to look down.