As a gimp, I watched the Muscular Dystrophy Telethon with disdain -- until Jerry's real kid said she felt "sad" for her daddy. 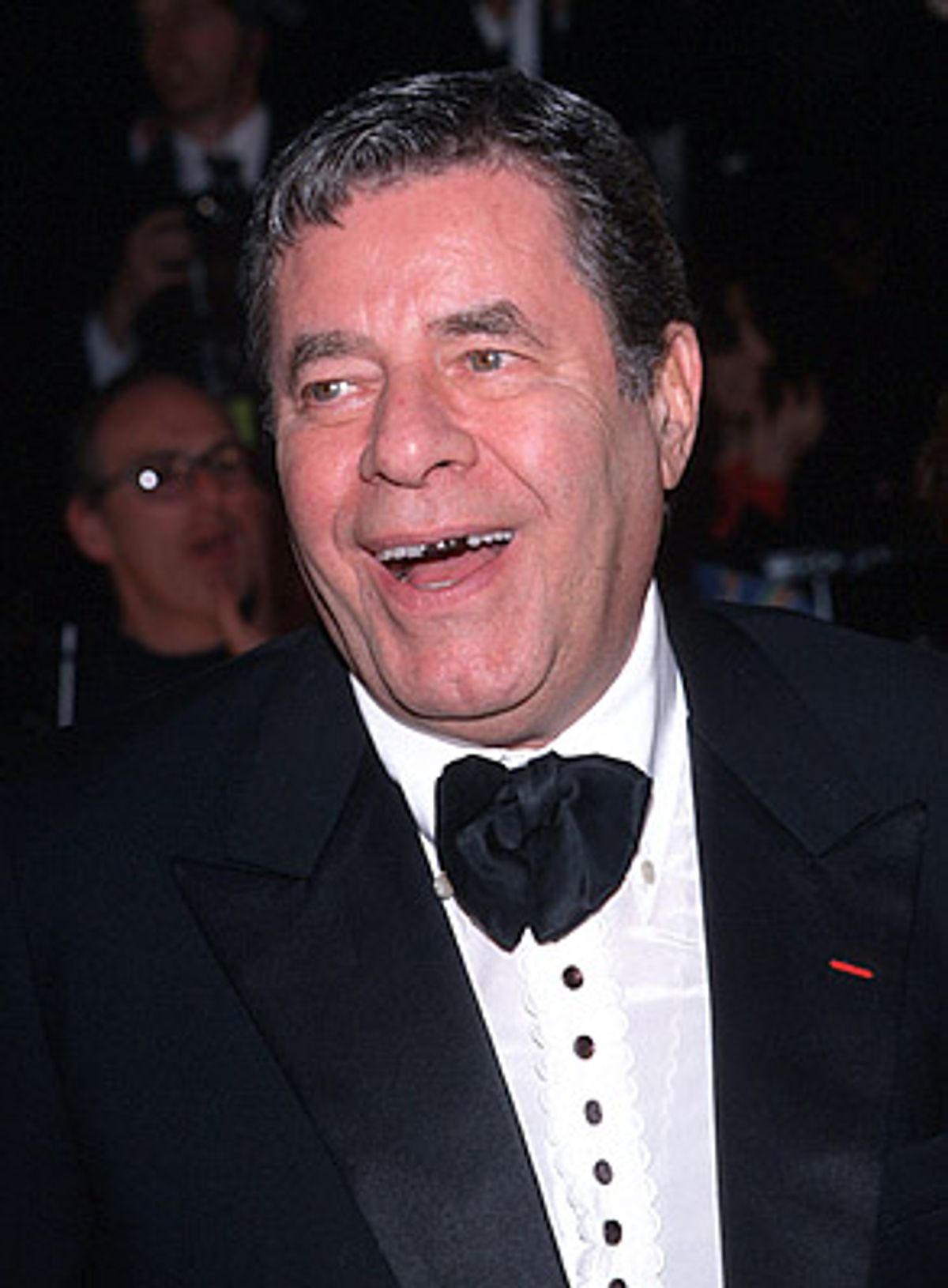 "Go back to your TV, you fucking loser!" the guy yelled. Then came a click and the distinctive buzz of a disconnected telephone.

And I did. Geez, I thought, I wonder if a weirdo can be psychic. My telephone friend had called Labor Day afternoon from three states away to share his thoughts about an opinion piece I'd written for the Cleveland Plain Dealer newspaper. My essay encouraged people to rethink their support of the techniques employed by Jerry Lewis during his annual Muscular Dystrophy Telethon, but Mr. Eloquent thought $50 million plus was worth more than respect for people with disabilities.

And that was the show I was watching when he called -- the Jerry Lewis MDA Telethon 2002, the annual extravaganza we gimps like to call "the Pitython."

It was a first for me. I've never been able to stand more than a few minutes of Lewis and his MDA crew. The maudlin pleas for money, the pathetic references -- "My kids" -- give me the creeps. This was the 37th tear-jerking pitython, a record-breaking run for the nutty professor -- and that's in spite of the hard work of a good number of crip activists attempting to push the MDA away from the pity party program and toward a more enlightened attitude about people with disabilities.

I've used a wheelchair for 40 years, but I'm late to the anti-telethon party. I got my first invitation a decade ago when Jerry Lewis called me a "half-person." That kind of pissed me off, especially since Lewis doesn't know me personally, and I was into sex and rock 'n' roll as much as the next guy. But I continued to ignore him.

Then things got worse. Last year, Lewis made some very unfunny comments during an appearance on "CBS News Sunday Morning."

"I'm telling people about a child in trouble," Lewis said, responding to a question about criticism of his telethon techniques. "If it's pity, we'll get some money. I'm just giving you the facts. Pity? You don't want to be pitied because you're a cripple in a wheelchair, stay in your house."

That pushed my hot button. I hate to be pitied simply because I use a wheelchair. Pity is a tolerable emotion if you can keep it to yourself, but once you put it into words, you're going to castrate someone.

I wasn't the only person, crip or not, who got angry last year. In fact, the outcry was enough that the MDA felt compelled to apologize. But it was no surprise to the veterans of the anti-Lewis pitython movement that the apology centered on the use of the world "cripple" rather than the idea that people with disabilities are not objects of pity put on this world to generate cash.

I like to think that I am reasonable person, a gimp without a grudge, and so I decided to watch as much of this year's telethon as I could stomach. Sunday evening I picked up the remote and packed away as many of my conflicting emotions as possible.

I harbored no illusions. I knew I'd be spending hours with a guy who'll never change. To Jerry -- and the honchos at the MDA, for that matter -- it's all about the money. Dollars equal cure. And if it takes dragging some kid on stage so that Jerry can tell him he's dying and only money can save him, that's what will be done. I suppose, if you look at it that way, money can be more important than people.

And that's why the pitython has always been the antithesis of entertainment to me. I'm the kind of guy who gets embarrassed when other people are put into awkward situations. We all project our own feelings and reactions onto others. And I know if I was asked to parade my body before a national television audience and shill for cash, I'd be damned uncomfortable.

The telethon began in my neck of the woods at 8 in the evening, with Lewis opening the broadcast talking about the 9/11 terrorist attack, the "Mideast cowards" who perpetrated them, and the heroic response of firefighters. Firefighters and their union are, it turns out, one of the major supporters of the MDA.

Lewis, 76, has been in poor health recently, and he's gained significant weight as a side effect of the steroid drug prednisone he takes to combat pulmonary fibrosis. Jerry, the zany, pratfalling bellboy, lurked unobserved in a large man who mostly sat as he talked about "my kids," genetic therapy and the cure around the corner.

I fell asleep after Jerry opened the telethon with Norm Crosby, who I last remember seeing on the "Ed Sullivan Show." I think Nancy Sinatra and Andy Williams were next on stage, but I drifted off. When I awoke before dawn on Labor Day, Lewis was gone. No more all Jerry, all the time.

The telethon droned on, of course. Jann Carl, Cynthia Garrett and Wayne Brady rotated as hosts and kept up a barrage of pleas that alternated with interviews with people with neuromuscular diseases. A parade of Las Vegas lounge acts and celebrities of yore punctuated the pityfest. The television and the telethon became a portal into the past: Andy Williams was joined by Glenn Campbell, Roy Clark, the Lennon Sisters and the Oak Ridge Boys. And then there was Charo, accent unimproved, and Steve Lawrence, Jack Jones and Julius LaRosa, tux-clad and gamely soldiering on.

A time warp, true enough, but the pitython is not locked into the past. Corporate America's accountants have found a category for charity somewhere above the bottom line, and the MDA repays the favor with a series of infomercials: Albertson's, CITGO, Anheuser-Busch and American Express, among others, got big chunks of air time for their millions.

And, if you watch the pitython long enough, you see they've learned to wring referential congratulations out of every last dollar. No honcho comes out and says, "We hate muscular dystrophy. Here's a million bucks to prove it," and then Gulfstreams off to the next merger conference.

No, the major players dole it out in chunks. During the hours I watched, the guys from ACOSTA and CITGO, and the woman representing Albertson's, were on so many times they began to blur together in my mind. The only guy on air more was International Association of Fire Fighters general president Harold Schaitberger, who trucked in enough checks to total $17 million.

But it's not the CEOs and the entertainers that upset most gimps. You can't get out of this world sane if you don't buy into the idea that most people want to do good, and so a wise person learns to judge slowly or not at all.

No, it's the incessant talk about dying rather than living. It's the "medical model," rather than promoting the idea that people with disabilities can live productive and happy lives. It's the identification of people as diseases rather than as fellow human beings with common hopes and ambitions and unique abilities.

But this year, Jerry had us beat. He had 12-year-old Mattie Stepanek, billed as "the world's bestselling living poet." No more "Poster Child" for the MDA. Mattie is the organization's national goodwill ambassador.

And, dear God, what a horse to ride. Stepanek has mitochondrial myopathy, a disease that has put him in a wheelchair and on a respirator because it messes up the ability to breathe and process oxygen. It also weakens muscles. That's his bona fides.

But the blue-eyed, blond-haired little guy with the big smile has been around, more than Jonathan Franzen even, with appearances on "Oprah" and on the New York Times bestseller list with his book of poetry, "Journey Through Heartsongs." And Stepanek is entirely at home on camera -- forthright, eloquent and able to hold his own in an interview, and capable even of discussing his own mortality without being maudlin.

It was nearly enough to make me want to burn my picket sign.

But then came a hauntingly compelling moment. For some reason, the producers -- surely not Jerry himself -- chose to rebroadcast a portion of CNN's Larry King interview with Lewis that aired last week as publicity for the pitython geared up. No crip activist would have expected King to ask the hard questions, but sometimes things just fall in your lap.

Lewis' young daughter had called the King show, and Jerry seemed genuinely surprised she'd been able to navigate the telephone system to reach him. It's easy to tell that Lewis delights in his daughter, and all went well until King asked the girl how she felt about her father's significant weight gain. She was confused by the question for a moment, but King pressed on, and she finally ended up saying, "sad."

Lewis flinched, and he ducked his head, his mouth turning sharply down. God, I thought, maybe the man does understand pity hurts. Maybe he has crossed over.

But I will never know. The nutty professor is a subject worthy of analysis either by Freud or H.L. Mencken, but much too easy a target for my anger.

I am too wrapped up in my own angry response when I am disparaged by pity. And I continue to move about in a society where people with disabilities are left to fight their own battles as progressives organize for the rights of labor, people of color, feminists, gay/lesbian people, prisoners on death row and a hundred other causes.

I didn't learn much from the telethon, and I didn't give a dime. I did come to believe Lewis is so much the character he occupies that we will never comprehend if his emotional reactions are real. I know he hates neuromuscular diseases, but I don't know if he hates me because I'm a "half-person -- a cripple in a wheelchair."