General Motors wants to take its pioneering electric automobiles off the road. But the geeks who drive them won't let go of the steering wheel. 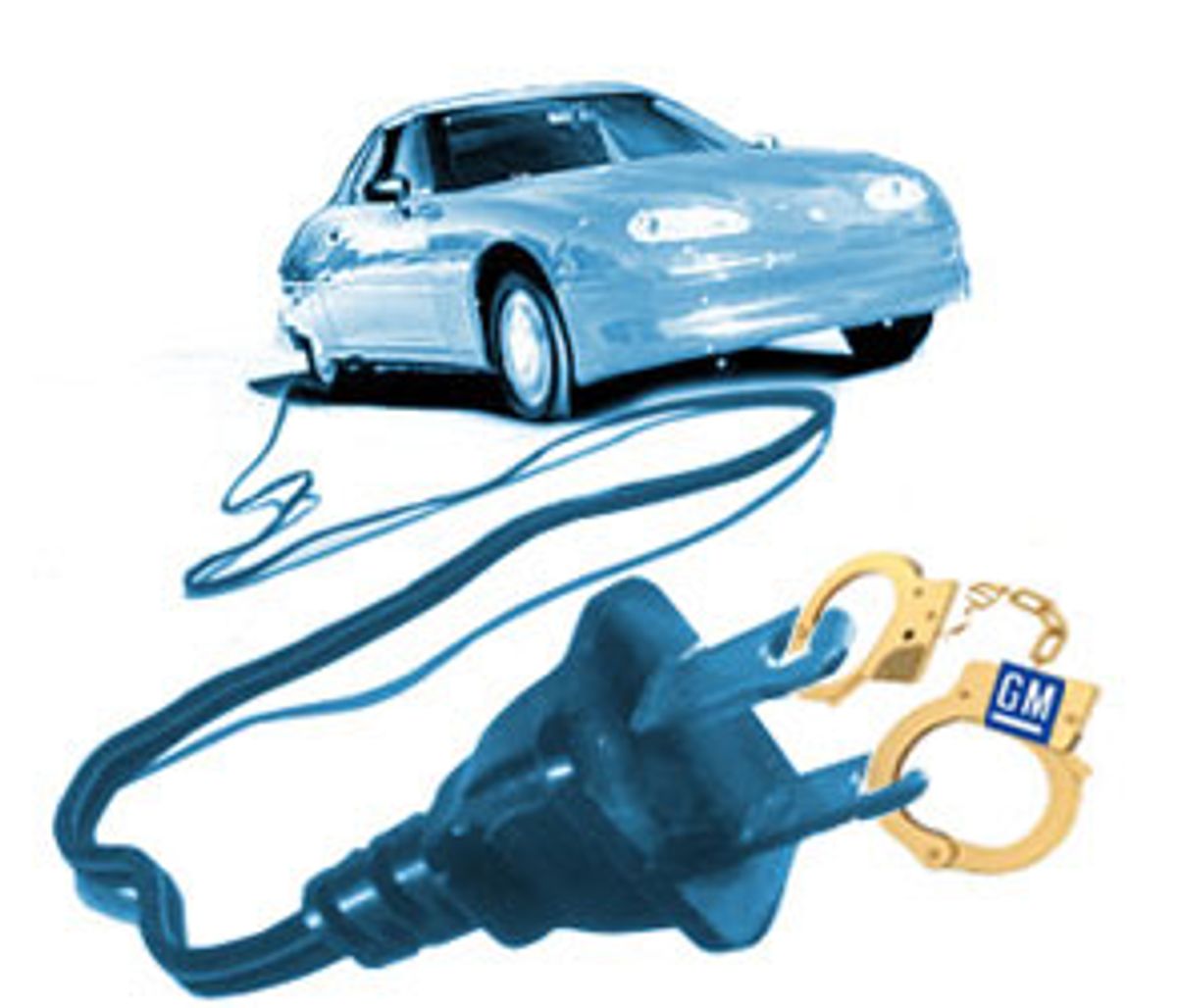 In stop-and-go traffic on Highway 101 here, Ellen Spertus, the 2001 "Sexiest Geek Alive," mock-apologizes for the ambient air pollution: "Sorry about the smog. But it's not our fault. This car doesn't even have a tailpipe."

Spertus' silver-blue, two-door sports car, which does zero to 30 in fewer than three seconds, doesn't have a gas tank or a key either. It's a 1999 EV1, an electric car that Spertus, a computer science professor at Mills College in Oakland, and her husband, Keith Golden, a rocket scientist at NASA Ames Research Center in nearby Mountain View, charge up every night at home in their garage in San Francisco.

For the computer scientist and the rocket scientist, the EV1 is a kind of geek Batmobile. Professor Spertus even uses her EV1 in the lesson plans for her operating-systems course, when her students study computer security. Instead of a key, a numeric code unlocks the door and starts the engine. The students' homework assignment: Break into the prof's car.

An MIT computer science Ph.D. whose geek cred includes having been known to wear a slide rule strapped to her thigh in a holster, Spertus is about to be stripped of her favorite new technology, along with hundreds of other engineers and environmentalists who drive these futuristic zero-emission vehicles.

"They're the cleanest cars ever made, and they want to take them off the road. It just baffles," says Greg Hanssen, an EV1 driver who is co-chairman of the Production Electric Vehicles Drivers Coalition, a group of electric-car drivers lobbying to keep the cars on the road.

In February, General Motors sent a letter to its EV1 drivers, informing them that the car company had decided not to renew the car's three-year leases when they expire, mostly later this year. (In 1997, GM produced 660 first-generation EV1's, followed by 500 more in 1999, according to Spertus, but many of the second generation went to replace the first, which had been recalled because of a safety issue.)

GM and other automakers have long argued that electric cars are not economically feasible or marketable; they maintain that no one, outside of a few technophiles and environmentalists, wants to drive a battery-powered car that needs to be charged about every 100 miles. Just last Friday, Ford announced that it would discontinue its electric car, Th!nk.

Testifying before the California Air Resources Board on Sept. 7, 2000, Sam Leonard, director of the General Motors Public Policy Center, said that the automaker had invested almost a billion dollars in electric-car technology and production, and had expected to manufacture 10 to 20 times the cars that they ended up seeing demand for: "The electric-vehicle market failed to materialize, not for lack of effort but for lack of customers willing to sacrifice the utility of today's gasoline-powered vehicles," he said.

But the EV1 drivers, many of whom sat on waiting lists for months to get an electric car, say that's just so much spin. They claim that the car company says there's no demand, because it wants to prove that it can't possibly meet California's strict emissions regulations. (New York and Massachusetts are also considering similar mandates; combined with California's, they could bring lower emissions requirements to one-fifth of the American auto market.)

At the same time as it is quietly killing off the EV1, General Motors has recently announced that in order to meet the California regulations, it will give away thousands of so-called "neighborhood electric vehicles." EV1 drivers say the neighborhood cars, which have more in common with golf carts than cars, and are only safe at speeds of about 25 mph, just serve to reinforce the public's misconception that electric cars are little more than glorified toys that will never replace gas guzzlers.

"I don't expect that we'll be able to save the EV1," says Spertus, who has helped organize EV1 drivers online who are rallying to keep their cars. "I just don't want the car companies to get away with claiming that electric cars are no good and nobody wants them."

Electric car drivers charge that the automakers have spent more money fighting against electric cars, by funding industry lobbying groups such as the Alliance of Automobile Manufacturers, which oppose emissions regulations, than they have marketing electric cars to consumers.

Why would a company try to undermine its own product? Because it didn't want to produce the product in the first place, say electric car advocates.

California state regulators forced automakers to bring electric cars to market. The cars came out in very limited distribution in the late '90s, mostly available only by lease, as a stratagem to win the carmakers credits toward California's zero emission vehicles mandate. That regulation currently requires that by 2003, 2 percent of all new vehicles offered for sale in the state be zero-emission, and another 2 percent be "advanced technology partial ZEVs," such as "hybrid" electric/gas vehicles.

The automakers and dealers currently have state and federal lawsuits pending to prevent the California regulations from going into effect in 2003, even though those requirements represent a significant retreat from California's original zero-emissions vehicle mandate of 1990, which would have required that 2 percent of all vehicles offered for sale in the state be zero-emission by 1998, 5 percent by 2000 and 10 percent in 2003.

"It's been watered down consistently over the years, because the car companies have spent millions to fight it," says Jamie Knapp, a spokesperson for the California ZEV Alliance, a lobbying coalition of environmental and public-health groups. "It's a real shame, since the automakers have already proven that the technology exists, and there are already people who want the cars and can't get them."

But now it looks like even the watered-down regulations won't go into effect, at least not in 2003. "The Air Board has said publicly that it's not going to enforce the 2003 mandate," says Richard Varenchik, deputy communications director for the board.

That's because a federal judge in Fresno issued a preliminary injunction against the mandate two months ago, ordering the California Air Resources Board not to enforce the regulation. The Production Electric Drivers Vehicle Coalition has filed a motion to intervene in the federal case, hoping to give electric-vehicle drivers a chance to appear before the court and make the case that there are drivers who want these cars. The hearing will be held in Fresno on Oct. 30. But a state suit, brought by automakers and dealers, also enjoins the Air Resources Board from enforcing the regulations.

Varenchik from the Air Resources Board says the litigation means the board will likely reconvene to review the whole zero emission vehicle mandate next year.

But what will become of GM's existing EV1s, even if California doesn't find a way to enforce the regulation that they were put on the road to meet?

"The majority of cars are going to get crushed," says Hanssen. "GM wants the program over. They want the cars off the road. They want it out of their hair. They don't want us out there driving these cars, talking about how great they are." GM did not return calls for comment.

"It's a terrible shame, because it's the best zero emissions vehicle out there, and they were first to market with the technology," says Knapp from the California ZEV Alliance.

While electric cars are being snuffed out, automakers are trotting out hybrid vehicles as the answer for fuel-economy-conscious consumers. Nationally, Honda has sold more than 8,000 of its Honda Insight hybrids. The company is projecting sales of 2,000 a month in the first year for its 2003 Honda Civic hybrid. Toyota, claiming 90 percent of the hybrid market worldwide, says it has sold over 100,000 of its various hybrid models. American car companies say they'll follow suit with their own hybrid models.

Unlike electric cars, hybrids do not have to be charged, since they run partially on gasoline. But electric car drivers are reluctant to go back to the fuel pump at all. "I have no intention of going back to gasoline if I can possibly avoid it," says Bob Seldon, a patent attorney in Santa Monica who has been driving an EV1 for five years. "In my electric car, I start with a full 'tank' every morning. I've got the range I need. It has great performance with zero maintenance, and electricity costs me about half as much per mile as gasoline."

General Motors is by no means the only car company that has pulled back from electric vehicles. But the company has displayed a particularly ham-fisted approach all its own. When Honda yanked its EV Plus electric car, drivers persuaded the automaker to keep the existing cars on the road by modifying the lease to a month-to-month lease without warranty.

The EV1 drivers asked GM to do the same. Early this summer, 58 EV1 drivers sent checks to GM as proof that they wanted their leases to continue, petitioning the company to keep the EV1s on the road.

The checks, totaling more than $22,000, came back, uncashed, by registered mail in late June. "We're upset about them taking these working cars away even though we're willing to pay to keep using them," says Spertus. "My husband and I would like to buy ours, since in all likelihood GM is going to destroy these cars although they work great and don't pollute." GM has pledged to contribute some of the cars to museums, but the EV1 drivers are skeptical, since just how many museums out there really want an electric car?

"I can understand GM not wanting to make more EV1s since it's expensive, but why do they have to take away the EV1s that already exist?" says Spertus. She and some of the other EV1 drivers who had their checks sent back by GM are now donating the money to help fund the Production Electric Drivers Vehicle Coalition's legal action in the federal suit in California.

The EV1 drivers find themselves in the odd predicament of defending a vehicle that they don't own from a manufacturer who wants to kill it off. Seldon says of the recall: "It's a tragedy. Everyone I know who has leased it has been totally unwilling to let go of it. I'm convinced that GM didn't want the car to succeed." The EV1 driver points out that electric cars do not require the same kind of routine maintenance that combustion-engine cars and even hybrids do, like replacing mufflers, oil changes and smog checks.

Yet, even as General Motors and other car companies are turning away from the electric zero-emissions vehicles that they've put on the road, they're crowing about their new whiz-bang advances in fuel-cell technology, another zero-emission source that's still off in the misty future.

"These fuel cells that they're so happy about, they're probably only so happy about because they're perpetually 10 years way," says Hanssen, who as of March 2003 will convert from his EV1 to Toyota's Rav4 EV, a small electric SUV that's still available and can actually be purchased, not just leased.

As for Spertus, she's contemplating committing an act of "civil disobedience" to keep her tailpipe-free car cruising the Bay Area freeways. When her lease expires at the end of December this year, she's thinking about just not giving the car back.

But even the Sexiest Geek Alive is reluctant to risk going to jail for auto theft to save her electric car.