In an Afghan province known for its hostility to the West, the U.S. is hunting for a fierce Islamic military leader. 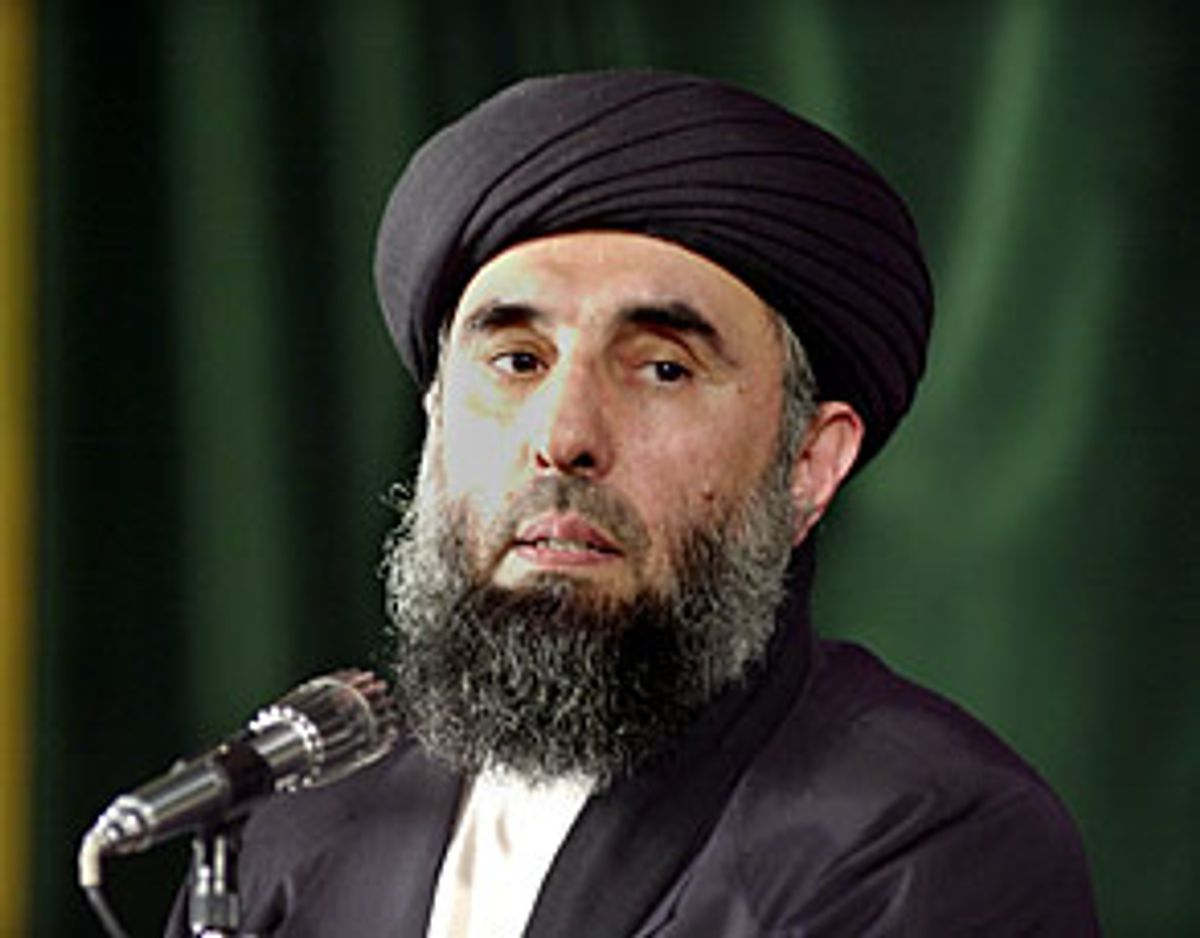 U.S. aircraft opened a thunderous airstrike Friday night in the mountains southeast of Asadabad near the Pakistani border, apparently targeting the forces of an Islamic radical who may be linked to Thursday's attempted assassination of Afghan President Hamid Karzai.

After a day of mounting tension here, two large explosions were heard at about 9:30 p.m. [1 p.m. EST] in a Kunar Province valley, reverberating with the deep, booming signature of a B-52 bombing run. Propeller-driven aircraft then circled the area, apparently in search of targets, and about 40 minutes later, a steady stream of helicopters was seen racing toward the Pakistani border.

Few details of the attack were immediately available. Asadabad is a stronghold of the Hizb-e-Islami Party, a radical fundamentalist group headed by Gulbuddin Hekmatyar, which has pressed for creation of an Islamic state in Afghanistan. On Friday morning, U.S. Special Forces troops raided an Asadabad hotel where a handful of Western journalists were staying, and briefly detained a reporter for Asia Times Online.

Said one Special Forces soldier: "Hekmatyar is our target in Kunar Province."

Hekmatyar is considered a ruthlessly ambitious Islamic leader, and shelling from his troops caused extensive damage in Kabul in the mid-1990s as he tried to drive the government from power. He was in exile in Iran during the Taliban's reign, but he is believed to have returned to this area east of Kabul with a vow to join the remnants of al-Qaida and the Taliban in a holy war against the U.S.

Talk of an uprising has been building here in recent days. On Wednesday night, as heat lightning flashed over mountain peaks and U.S. helicopters droned in the distance, villagers here spoke of a grass-roots conflict with the United States and the Karzai government as if it were only a matter of time. Their words suggested an unsettling parallel with the long war against Russian occupation in the 1980s.

Tensions escalated sharply following an Aug. 8 incident in which U.S. Special Forces troops shot and killed four men of a local family near the village of Shegai in the Asadabad district. A spokesman for the U.S. military, Col. Roger King, said the men were killed after they attempted to fire on the soldiers. Villagers here say that the four men were not Taliban or al-Qaida, but Afghan soldiers working for the new government.

For the past six months, American soldiers have been conducting house-to-house searches and arrests in a bid to root out Taliban and al-Qaida sympathizers, although critics say that they are being fed bad information by members of rival tribes seeking to gain advantage. In keeping with security practices, the searches are not announced ahead of time, and the permission of the owner is never asked. This, too, grates on the villagers. They are ethnic Pashtuns, and they consider a forced entry to a family's house as a grievous dishonor, one typically corrected in the tribal system by shedding blood. An Afghan family house has two areas, one reserved for guests and another reserved for women and children. According to pashtunwali, the ancient and formal system of honor, hospitality and revenge, no one outside the family may enter the inner part of the house without permission. Breaking this taboo often results in the beginning of a blood feud that can last for generations.

Although most people here understand the nature of the American mission, they all voice concern that the heavy-handed tactics are already backfiring, creating sympathy for the same people they are trying to apprehend.

Asadabad is a small agricultural town in the eastern mountains of Afghanistan, not far from the border with Pakistan, famous for being the birthplace of jihad against the Russians. The fall of the town is often recounted as the first victory of the mujahedin, many of whom fought alongside Muslims from other parts of the world. In fact, many of the residents have converted to the Wahabi form of Islam, which is widespread in Saudi Arabia and was brought here by men from the Arabian Peninsula who came to fight in the name of Islam. Wahabism follows from a particularly strict interpretation of the Quran. The most famous Afghan Arab, Osama bin Laden, spent time in Asadabad during the war against the Soviets and is familiar with the mountains surrounding the town.

Hekmatyar, too, is a veteran commander of the Soviet war, and he has a strong base of support here. Hekmatyar has recently urged all Afghans to join Taliban forces and rise up against foreigners in Afghanistan; his party, Hizb-e-Islami, is suspected of having links with Taliban forces. Najibullah, the vice-officer in charge of security for Asadabad, said this week that the Americans received a tip that Hekmatyar was staying in a local house and decided to execute a search.

"Six vehicles full of soldiers came in the morning during prayer time and I was still praying," recounted Mohammed Ibrahim, the 25-year-old son of the homeowner. "My father had just finished praying when U.S. forces came to the house. They didn't knock and immediately started to shoot at the door, then when I went to the door they arrested me. They tied the hands of my grandfather with wire and put him in the car along with two of my brothers."

Unable to control his voice, Ibrahim then charged the U.S. and Afghan forces with looting his house. "They took money, keys, pens, papers and they took everything," he said. "They took more than 100,000 rupees [roughly $2,000] and the expensive jewelry of the women." While showing a piece of luggage that had been slashed open with a knife, Mr. Ibrahim explained that he had assembled 24 village elders to present his case to the governor of Kunar Province. While they wait to see the provincial authorities, Ibrahim must pick up their hotel bill and all expenses. When asked why the American forces had chosen his house, he said that he didn't know.

It is not clear how many people in Asadabad sympathize with the Taliban, and those who do are quickly changing their stories to avoid arrest. One oft-repeated rumor is that Hekmatyar is in Kunar Province, trying to whip up local anger against the U.S. presence here, but it is difficult to confirm. The anger, however, is real.

U.S. Special Forces are not available to reporters and have reacted badly upon discovering that they are being photographed. At 8 a.m. Friday, nine humvees carrying American soldiers raided a local hotel in search of a Brazilian journalist for Asia Times Online who had taken photographs of the troops. "Let's delete all of these pictures before these people start shooting at me again," one soldier said as he reviewed the digital images. As a crowd of Afghanis assembled in front of the hotel to watch, the troops forced the photographer to delete all the images, one by one.

In a sign that the shooting may just be about to start, in the village of Shegai where the four local men were killed, there are reports that the locals have blocked the road and have told American forces that they will be fired upon if they try to come through. "There will be jihad against the United States, of that I am 100 percent certain," one local resident, Abdullah, said Wednesday night from the Istiqlal hotel. "The people are meeting right now to plan it."