Ice Cube and Cedric the Entertainer trade jabs in a cheerfully old-fashioned comedy about a South Side Chicago haircut joint and the community it anchors. 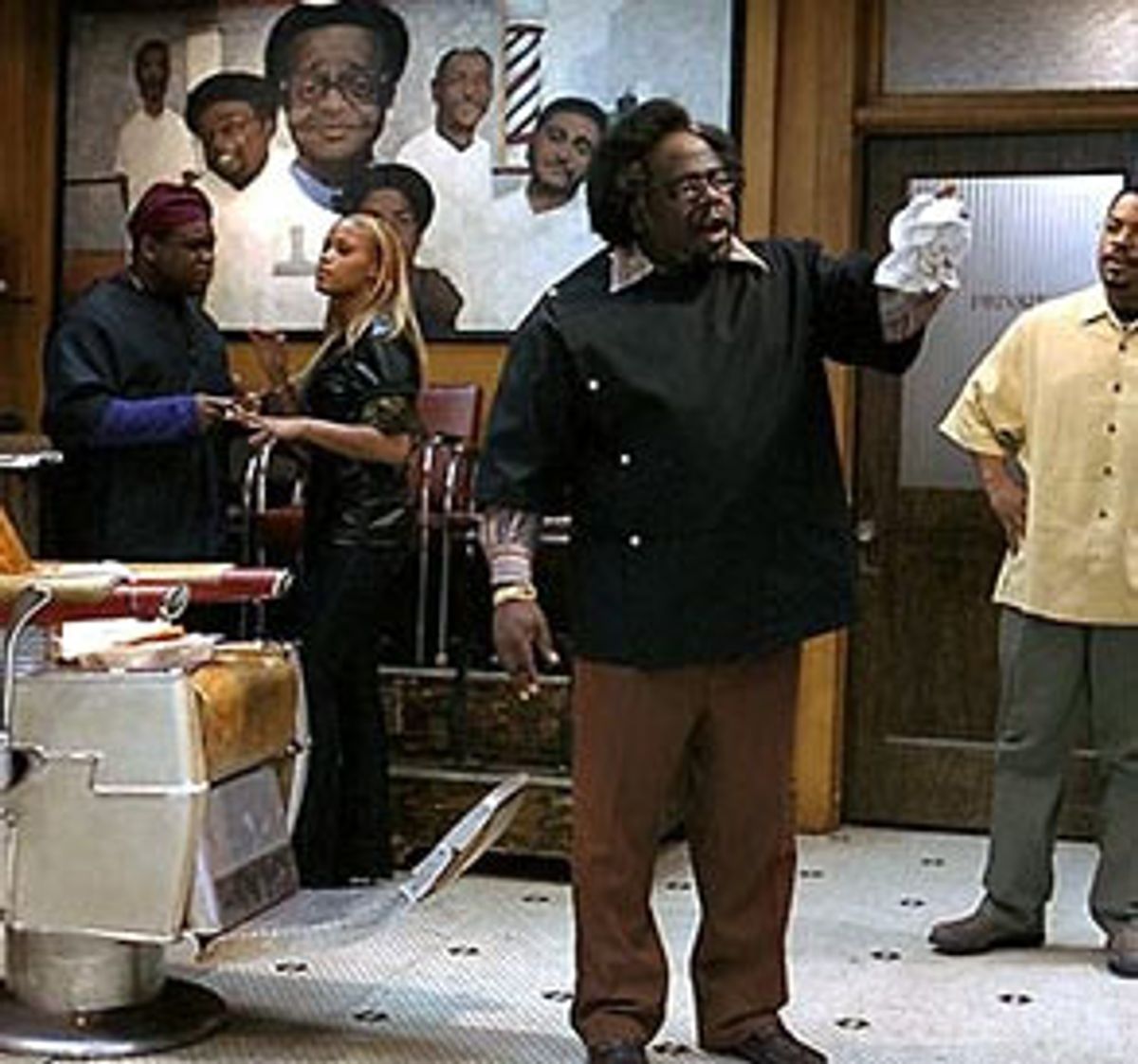 There's a sentimental, preachy side to the African-American ensemble comedy "Barbershop." The movie has been conceived as a pep talk about black self-reliance and about what it sees as the deterioration of bedrock values in the black community. At its worst, the movie says that the older generation is always right and that challenging their wisdom will always get you in trouble. While I don't buy that conservative eyewash, the good liberal in me would feel churlish to completely dismiss a movie about people who are trying to maintain some semblance of a community (that's one of the things I love in the crime novels of George P. Pelecanos). And "Barbershop" is so often loose and funny that you'd have to be pretty stingy not to get some pleasure from it.

The movies have often used female beauty shops and hair salons to set up bitchy, funny scenes of women gossiping, so it's remarkable that (with the exception of Spike Lee's short "Joe's Bed-Stuy Barbershop ... We Cut Heads") no one has made a movie about their masculine counterparts. Especially considering the importance that barbershops hold in the black community.

Henry Louis Gates Jr., in his memoir "Colored People," remembers Mr. Comby Carroll's barber shop in his West Virginia hometown this way: "Grown men, and boys, would crowd into his barbershop in Keyser, 15 or 20 at a time, and sit there on Saturdays, patiently waiting their turn, listening to this man tell lies ... He'd stand at the barber chair all morning long, telling the dirtiest, funniest jokes, passing around girlie magazines that you've never heard of ... I always felt a certain warmth in Mr. Comby Carroll's barbershop and didn't mind the long wait for a cut. The stories were so funny, and often people would talk about the news and current events."

Mindful of the values it's trying to instill (and its PG-13) rating, "Barbershop" doesn't give full vent to the tall tales and dirty jokes and sexual bragging you might find in a real barbershop. And the movie doesn't do nearly enough with how the men react to having a female cutter (the hip-hopper Eve, with her pouty lips and hard little face) in their midst. When a pulchritudinous ebony beauty walks into the shop to pick up her little boy, the movie is too clean to pull off the lascivious jokes it might have, and you sense an opportunity slipping away. But you do get a sense of how the shop is a social gathering place and a neighborhood news and gossip clearinghouse as well as a place of business.

Director Tim Story uses the floor of the South Side Chicago shop as a stage set, with customers and barbers calling back and forth to each other, appraising who comes in and just generally shooting the shit. There are discussions on the difference between "a woman with a big ass" and a "big-ass woman," instruction in the proper way to give a man a shave, and a couple of outrageous digressions from Cedric the Entertainer as Eddie, the old-time cutter who sits in his chair all day holding forth, primarily because he's got no customers to distract him.

Ice Cube (good, as usual) plays Calvin, whose father built the shop, worked in it for 40 years, and died nearly broke. He's about to lose the place because he can't pay the property taxes and is considering selling out to the neighborhood loan shark (a macked-out Keith David). The movie takes place in the course of one Saturday during which Calvin comes to realize the importance the shop plays in his life and, by extension, in the life of his neighborhood.

The script, by Mark Brown, Don D. Scott and Marshall Todd, doesn't go deep enough into its characters. Jimmy (Sean Patrick Thomas of "Save the Last Dance"), for example, is the college kid who thinks he's smarter than everyone else in the shop and has no compunction about trying to prove it. Were the picture sharper and less interested in imparting an overall feeling of benevolence, it could hint that Jimmy, in the manner of smart kids who don't know what to do with themselves, will likely still be cutting heads in 20 years, still thinking he's better than his coworkers, and still convinced he's destined for better things.

But it's a lively bunch, and with the exception of Keith David's old-style hood, the movie doesn't have a bad word to say about anybody. Not even the sort of characters who have been set up as targets in other black movies, like the Indian deli owner down the block or the white-boy barber who's completely immersed in black culture. (A big, affable lug, he's played by Troy Garity, the son of Jane Fonda and Tom Hayden.) And I loved watching Leonard Earl Howze as Dinka, the shop's cuddly West African worker, with the killer smile surrounded by chubby baby cheeks. That smile almost never gives out, even when his coworkers are using his heritage to make him the butt of the joke.

When Cedric the Entertainer's Eddie has to become the movie's voice of wisdom and experience, he's a drag (he gets to be the black equivalent of Doc in "West Side Story"). When the movie leaves him to his own devices, to grumble and pontificate and malaprop while he's eating his lunch or sticking his nose in other people's business, he's frequently hilarious. Watching him is like watching the old black-and-white Popeye cartoons; you find your ears straining to catch the funny things he's saying under his breath. Ice Cube is basically the movie's straight man, but he plays the role with grace and a flicker of anger that keeps the part from turning into an upright drag. He makes you feel how keeping his father's business running weighs on him and, finally, how it buoys him.

What makes "Barbershop" so likable, with all its flaws, is that it has none of the pushiness and decibel volume of most contemporary comedies (it's nothing like the frenetic bash the trailers make it appear to be). Sitting in a barbershop listening to the neighborhood characters try to out-B.S. one another should be relaxing, a chance to put your feet up and give vent to your gripes, and that's what the movie is.

Like most other movies with predominantly African-American casts, "Barbershop" is being marketed to black audiences and to the hip-hop fans (black and otherwise) who'll want to see Eve and Ice Cube. I think that's a mistake, because with the right handling, the movie could be a modest crossover success. It's easy to imagine older moviegoers who feel out of synch with the pace and flash of current movies responding to this portrait of people working hard to keep themselves and their community afloat. Like the old-time barbershop itself, it may be old-fashioned, but it's not outmoded.