"Everything comes to an end"

Money, drugs, psychiatry and rampant individualism threaten both of Tony's families as "The Sopranos" sounds an even darker, bleaker tone. 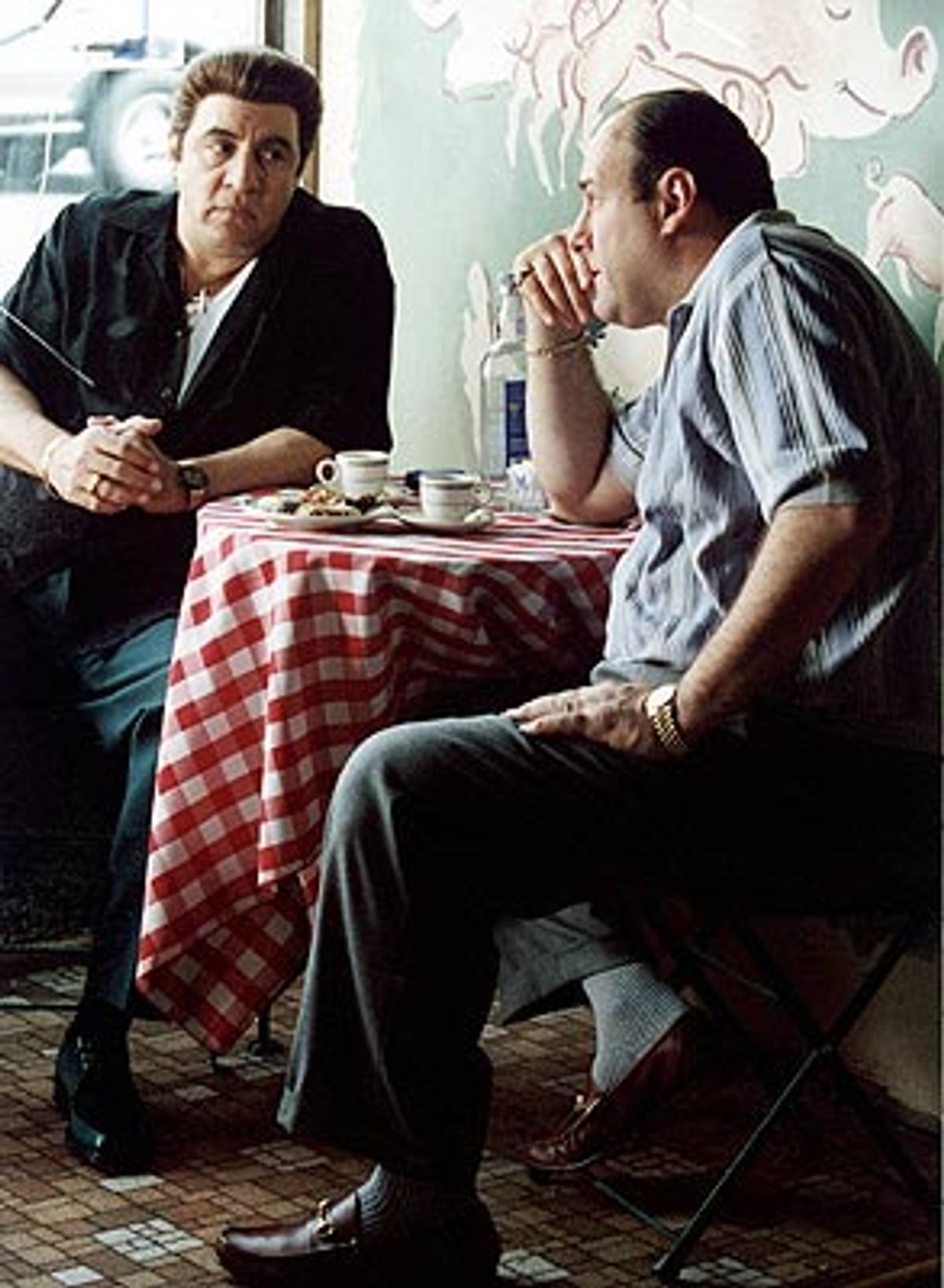 The Soprano surname has nothing to do with singers. It was the name of a New Jersey family the show's creator David Chase heard about when he was growing up. But it is pitch-perfect, and not just because it's a funny name for a big, gruff thug prone to basso moods. If "The Sopranos" were an opera, Tony's family would sing in the highest register, a few octaves above the rest of the cast.

This may be a family of lowlifes, but the Sopranos are emotional virtuosos capable of hitting heartbreaking notes. (And no one who has seen Tony pummel a hapless bartender for throwing away melted ice can argue that his body is not his instrument.) They are also world-class divas -- moody, high-strung, self-indulgent, self-destructive and tragic. So, it's a gift and a curse, this being a Soprano, as Maria Callas would surely agree.

After a seemingly endless hiatus (it's actually been a year and a half), "The Sopranos" returned on Sunday night in a somber mood. Ari Onassis (to stretch the Callas metaphor for just another second) has run off with Jackie Kennedy and the high life has hit the pavement. Tony's career is in a downslide, money is tight, he's filling the void with ice cream sundaes and bad omens are popping up everywhere. In the debut episode, squirrels abscond with food meant for Tony's departed ducks and a long, steady close-up of Andrew Jackson's left eye on a $20 bill -- his irises an ever-tightening series of concentric circles -- reveals the haunted, hunted stare of a guy everybody wants a piece of.

When Carmela spots Big Pussy Bompensiero's impoverished widow handing out sausage samples at the supermarket, Mrs. Soprano looks as if her future has just flashed before her eyes. Anxious, she starts badgering Tony about setting up trusts and starting a portfolio "in case something should happen to you." Tony, who has been secretly hoarding cash in bags of duck feed, tells her to forget it. ("Stocks? You've got to be high up in the corporate structure to make that shit work for you.")

"Listen to me," Carmela shoots back, "or you can watch the fucking news. Everything comes to an end."

This remark is more prescient than Carmela knows. But Tony is well aware that the salad days are over. About a year has passed since the events of last season's finale and there have been some changes. Uncle Junior is on trial, broke and under surveillance. Paulie is in jail, broke and being romanced by the New York family. Tony's sister Janice has taken up with yet another of his volatile rivals. Christopher, whom Tony has made acting captain in Paulie's absence, is shooting fresh smack daily and mistaking Tony's efforts to use him as a buffer for a sign that his characteristic boneheadedness has somehow morphed into a Napoleonic leadership style overnight.

Tony's efforts to keep his families together consistently misfire. His decision to put Christopher in a position of responsibility steps on several more senior toes and threatens to jeopardize his most lucrative scheme. A.J. is an island, Paulie is hurt and Silvio is starting to doubt him. Meadow, who has blossomed into a champion manipulator, instinctively uses Tony's guilt over having ordered her ex-boyfriend whacked as a means to get her way in everything. She now uses Jackie's name as a protective incantation whenever she's asked to clean up after herself, and is threatening to drop out of college.

Neither of Tony's families is very happy with him at the moment. Worse, they have chosen this time to break ranks and get testy with him. Everyone around him is particularly vulnerable, making Tony exponentially more so.

The "organized" aspect of his business has become merely nominal. Tony is losing his grip as everyone around him starts to grow wings. (Which, incidentally, is the first thing Christopher plans to do after being made acting captain. "You know, in my hair. Like Paulie's.") It's a theme that was foreshadowed in last season's finale, when A.J. interviewed at a military school. Carmela was horrified by the idea, but Tony loved the idea of a school that teaches children to do what is "good for the core." The only thing that troubled him about it was "this 'army of one' thing."

"What happens," Tony asked the academy's own Gen. Ripper, "when each 'army of one' decides, 'Fuck it, I'm not going over the top of the foxhole' or 'I'm just going to blow the lieutenant's head off' -- you know, 'cause they've been told, 'You're an army of one'?"

"The Sopranos" has always worked on the principle that in order for a modern hero to be tragic he doesn't need one towering monument of a flaw, but dozens of flabby little human ones, some stress, too many demands on his attention and strengths that can sometimes be weaknesses.

Though he would never admit it to her, Tony does take several things away from his estate planning chat with Carmela. One is a handy catchphrase he uses to bludgeon his boys in the backroom of the Bada Bing. "I want to know why there's zero growth in this family's receipts," he bellows, shortly after she has asked him the same question. Tony's eager conversational appropriations -- he's always picking up useful phrases from Dr. Melfi, as Christopher is always picking them up from him -- are the little chinks in his armor through which we glimpse his insecurity and dependence on the few people he trusts.

That circle has always been small, but it's getting smaller. As he tells Dr. Melfi during an unusually candid session, "There are two endings for a guy like me. Dead, or in the can." That's unless he can find a way to rely exclusively on family. Unfortunately for Tony, this can only mean Christopher, whose drug use is escalating, and whose fiancée, Adriana, has unwittingly befriended an undercover FBI agent.

The Soprano gift/curse dichotomy has always fueled the show's cynical but somehow poignant sense of humor. There are fewer giddy moments in the fourth season's first episodes, and the comedy has become more wry and rueful as a sense of impending doom bears down on the characters. Even the show's trademark malapropisms -- like Tony's first-season allusion to a "Korshak" test in his shrink's office, or Adriana calling Christopher her "Tennessee William" -- seem sadder.

In one scene, Uncle Junior's sad-sack underling Bobby mistakenly refers to Nostradamus as "Quasimodo," leading him into a brilliantly illiterate riff about how he got them mixed up. Quasimodo is the hunchback of Notre Dame, Notre Dame sounds like Nostradamus, Notre Dame also has quarterbacks and halfbacks, and has Tony "ever pondered the back thing with Notre Dame?" No? Well, Bobby thinks it's interesting. It's a funny scene, but they're still talking about the imminent end of the world as they know it.

"The Sopranos" has always had a knack for making us see the world through its eyes, so it's fitting that the unraveling of both Tony's families looks like further evidence of the world gone to hell. The economy is now so bad that even Tony's "recession-proof business" (one of only two so immune, the other being "certain aspects of show business," as Silvio explains) is suffering.

Suburban parents can no longer dissuade their daughters from going to Europe on the grounds that it's dangerous, and even their blind faith in the Ivy League as a bastion of infallibility is rocked. (Meadow makes a constant show of contempt for the senior Sopranos' educational deficits, mocking Carmela for not understanding a reference to "the canon," which she claims she has been reading all summer by the pool. "Is Mary Higgins Clark part of that group?" Carmela retorts.)

The Catholic Church doesn't fare much better. And forget psychiatry. Just as Tony is admitting to Dr. Melfi that he trusts her, she is offering what may or may not be a well-intended therapist referral for Meadow that could lead to Tony's undoing. (Meadow's terrifying therapist is introduced in next week's episode, in what has to be one of the creepiest scenes in the series' history.)

David Chase has signed on for a fifth season of "The Sopranos" (this one being the fourth), but just watching Tony trudge wearily down the driveway in his robe while former Sex Pistol John Lydon barks the lyrics to "World Destruction" is enough to make you wish they wouldn't prolong the agony. (Lydon's screed against the state of the world is the ideal anthem for Tony's current life.)

Early in the first episode, A.J. sneers at Tony for revealing his ignorance. But "The Sopranos" makes a pretty convincing case that it's not a lack of information but the erosion of filial bonds, the trumping of instinct by intellect, the cult of emotional adjustment and the spread of malignant individuality that causes most of the world's problems.

As dark, inscrutable external forces close in on the Sopranos, one thing becomes clear. Rugged family values are giving way to soft individualism. And friendship, loyalty and love don't stand a chance against the icy incursions of economics, psychiatry and the law. Right now, for Tony, it's like the Lydon song says: "Your life ain't nothing."