Sympathy for the misanthrope

It would be easy to feel sorry for "Curb Your Enthusiasm's" Larry David -- if only he wasn't so damn unlikable. 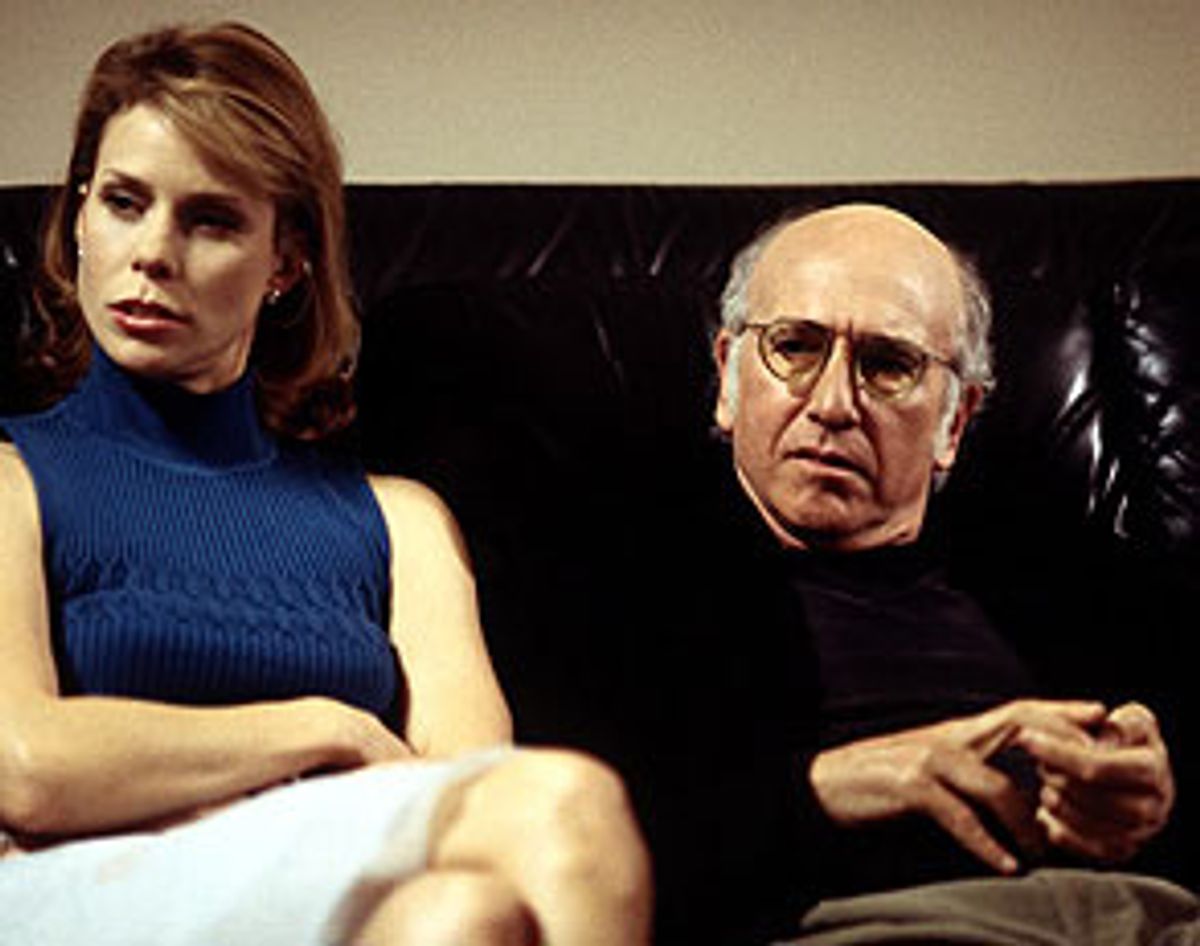 Larry David is just like a modern-day Job, except that he has the patience of a fruit fly and he isn't covered in boils. Also, he is very rich (having suffered no loss of sheep, oxen or asses -- although he has suffered plenty of asses), and his wife never tells him to "curse God and die." He is, finally, untroubled by worm infestations (though if he were troubled by worm infestations, he'd call the exterminator and they'd have a misunderstanding). But it can't be said that Larry David is not afflicted. Every day, in a million annoying ways, God, or the universe, or whoever's in charge, smites him and good.

This is not necessarily true of the real Larry David, New York comedy club veteran, co-creator of "Seinfeld" and current star of HBO's "Curb Your Enthusiasm," although he is rather famously the model for "Seinfeld's" George Costanza. And "Curb Your Enthusiasm" was inspired by a 1999 cinéma vérité mock documentary based on his post-"Seinfeld" life. On the series, which began its third season Sunday night, David spends most of his time putzing around Los Angeles alternately worrying aloud, taking umbrage and pissing people off. Maybe he's more modulated in real life, maybe he wishes he wasn't. "I have a tendency toward catastrophic thinking," he has said. "Sometimes, I'll be in a situation and think, If I'd said this, or done that, that would have been very funny. And I have the luxury of living out that fantasy on the show, where you couldn't have done that in real life."

In the fantasy, people do exactly as the pettiest part of them pleases, become incensed when others do the same and then obsess over even the most trivial principles governing social interaction. Watching "Curb Your Enthusiasm" is like having front-row seats to a superego-id death match. The characters are consistently selfish, self-involved, superficial and judgmental. They are also so obsessed with questions like, "Is it wrong for a dentist to invite a patient over for dinner?" and "Is it right to refuse a wedding gift four months after the wedding-gift cutoff date?" and "If I tell you I may lose a testicle, doesn't that entitle me to your grandmother's secret brownie recipe?" that "Curb Your Enthusiasm" could be alternately marketed as an etiquette manual for the terminally inconsiderate.

For all of their shared obsessions, "Curb Your Enthusiasm" isn't a "Seinfeld" retread. For one thing, all of the dialogue is improvised, although David writes a detailed outline for each episode beforehand. Each scene is then shot four or five times and the best ones are selected during editing. For another, "Seinfeld's" characters inhabited a slightly surreal fictional realm -- jobs were either superfluous or hilariously unlikely, etc. -- but David is a real guy living a surreal life among other real people with surreal lives. Aside from the more incidental characters and the regulars (Cheryl Hines plays his wife, Cheryl, and Jeff Garlin plays his manager and close friend, Jeff), many of the characters on "Curb Your Enthusiasm" are real celebrities playing themselves. One of the show's slyest comic feats is the feeling of displacement it produces in the viewer by putting people like David, Michael York and Ted Danson in a room together and showing what would happen if they invested in a restaurant together.

Larry is at home with people like Danson -- at home enough to call him an asshole in front of his 8-year-old daughter. (He spells it, but, alas, she's a good speller.) But it's only a superficial kind of familiarity. In one episode last season, he found out that Jeff's estranged wife had some potentially embarrassing goods on him. Horrified, he exclaimed, "That's why I don't tell my wife anything! I treat her like an acquaintance!"

Even when he starts out as the aggrieved party, he manages to turn what little moral high ground he had going for him right around. It's as if he has some highly amusing form of aphasia that makes it impossible for him to relate to others in a way that doesn't cause offense. What saves him from being "unsympathetic" (though not nearly enough for the show to exist on any other network) is that everyone around him is just as petty and awful. A neighbor threatens to beat Larry up for throwing an apple core in his garbage can, Danson refuses to accept a gift shirt when he discovers it has a rip in it and, after Danson's daughter knocks Larry's front teeth out while swinging at a piñata, Larry's dentist fits him with huge, Bugs Bunny-style "temporaries" to get back at him for lying to get out of a social invitation.

You could almost feel sorry for Larry, if he didn't make it impossible. As in all of the episodes, every little seed of discord that he has planted along the way -- and Larry is the Johnny Appleseed of discord -- comes back to haunt him in a merciless karmic domino effect. If "Curb Your Enthusiasm" has plots at all, they are too labyrinthine to summarize, and too insanely strange for summaries to do them justice. They are really structures for the actors to hang their inspired extemporizations on. On "Curb Your Enthusiasm," the characters get to act exactly as they please and say what they are really thinking. But even when they behave, all their deeds go punished and all their pleasures are undone. Karma, or God, or the universe, or whoever is in charge, isn't stupid. It knows what they are really thinking.