For Noelle Bush, a different kind of justice

In Florida, drug offenders face hard time -- unless you have money or connections. 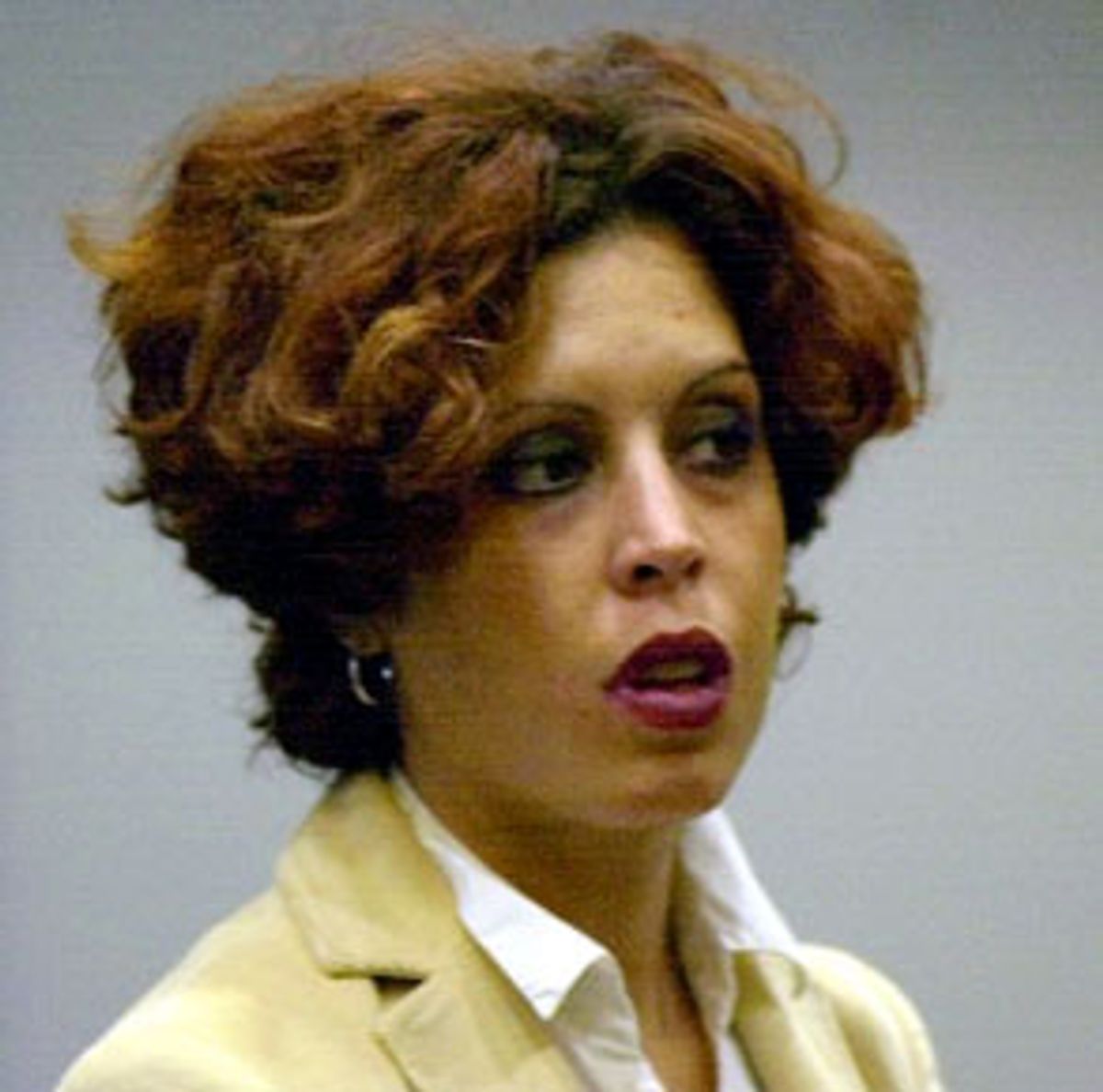 It's no secret that rich and poor drug offenders face vastly different kinds of justice. Just as moneyed criminals get Johnnie Cochran while the indigent make do with underpaid public defenders, so are well-heeled substance abusers more likely to end up in posh rehab clinics than in the prisons where poor addicts are warehoused. Sure, there are exceptions -- actor Robert Downey Jr. and baseball star Daryl Strawberry spring to mind -- but they're not the norm. The norm looks more like Noelle Bush, who, despite several drug violations, has so far served only three days in jail.

As most of the country knows by now, the daughter of Florida governor Jeb Bush and niece of President George W. Bush was found with crack inside her shoe in the Center for Drug Free Living in Orlando, where she was sent in January after being arrested for trying to buy Xanax with a forged prescription. It was not the first time she's been busted while in rehab -- her three-day jail term in July came after she was caught with a bag of prescription pills that didn't belong to her.

Drug-reform advocates certainly don't claim that Noelle Bush has been treated too leniently -- even three days in jail is too harsh, they argue. But, they say, the punishment is even more severe for people without her money or connections. "The question is whether she's being treated in a unique way," says Bruce Bullington, the editor of the Journal of Drug Issues and an associate professor of criminology at Florida State University in Tallahassee. "I think she is."

Her fellow patients seem to agree. As the Orlando Sentinel reports, Noelle Bush was reported to the police by a woman who said she was a Center for Drug Free Living client incensed by what she felt was the preferential treatment given the governor's daughter.

"One of the women here was caught buying crack cocaine tonight," the caller said in her Sept. 9 conversation with a 911 dispatcher. "And a lot of the women are upset because she's been caught about five times. And we want something done because our children are here, and they just keep letting it slip under the counter and carpet ... They said, you know, because it's basically Noelle Bush ... She does this all the time and she gets out of it because she's the governor's daughter."

According to the New York Daily News, one Center for Drug Free Living staffer heeded a supervisor's advice and tore up her written statement about finding the drugs rather than show it to the police. Without the statement, the police didn't have probable cause to arrest Bush. Four employees have been subpoenaed after refusing to cooperate with police, citing the center's privacy policies. Bullington says the employees would be in the right if they provided the same measure of protection to all their clients. Whether they do is hard for outsiders to determine, he says, because individual clinics have a "tremendous amount of latitude" in creating their policies.

"If this is something they do for all their guests, then it's perfect," Bullington says. "The vast majority of people who go into treatment fail very quickly, and fail multiple times." But the system isn't designed with that in mind, he says. "Anyone else who they found with a rock of cocaine, they would turn it over to the police ... And the courts will say there's no second chances, or one second chance."

Drug-reform advocates are trying hard to create a greater separation between treatment and the criminal justice system so that the police don't get involved in the lapses that most recovering addicts experience. Unfortunately, Bullington says, by allocating more resources to cops and corrections than to treatment and by filling top positions with law-and-order conservatives, Noelle's father is working against the broad application of the kinds of policies that have protected his daughter. "Again, the issue is not that she should be punished more but that other people should be given the same kind of break," Bullington says.

"If a normal person was building up a history like that of Noelle Bush, she would be looking at jail time now," says Sydney P. Smith, a defense attorney who spent seven years as a public defender in Dade County. "It's a discretionary call, but if they actually found drugs in someone's room, I think many clinics would report it because it's a crime."

A crime that gets many people locked up. Jim McDonough, director of the Florida Office of Drug Control, says there are currently 93 people in state prisons for marijuana possession. According to the Florida Department of Corrections, 20,000 people in fiscal year 2000 were convicted of felony drug possession in the state. A third of them went to jail, and 1,775 served more than a year. Smith mentions one of his clients, a legal immigrant from Nicaragua, who spent six months in jail and was then deported for committing crimes almost exactly like those allegedly committed by Noelle Bush.

Such discrepancies are the reason that Smith, who chairs the Florida Campaign for New Drug Policies, is leading the campaign to pass an initiative called the Right to Treatment and Rehabilitation for Nonviolent Drug Offenses, which will likely go before the Florida electorate in 2004. Advocates tried to get it on the ballot this year, but the Florida Supreme Court, which had to approve the measure, took six months to make a decision, and that left advocates too little time to collect the necessary signatures.

Modeled on California's Proposition 36, which passed in 2000, the initiative would amend Florida's constitution to mandate that nonviolent first- and second-time drug offenders be either sent to rehabilitation programs or let go. It would also take the likelihood of relapses into account by giving addicts multiple chances at treatment. In effect, it would force the state to treat all defendants the way it's treated Noelle Bush.

But led by Gov. Bush, opposition to the measure is fierce. "I can assure you that unless we have a change in leadership in the governor's office and the attorney general's office, prosecutors and law enforcement will mount a very active campaign against the passage of this," says Jerry Blair, president of the Florida Prosecuting Attorneys Association.

When talking about his daughter, the governor is the model of empathy. "The road to recovery is a difficult and long journey for those afflicted with addiction," he said on Sept. 10. But he took a very different tone in August 2001, when arguing against the Right to Treatment initiative. "To suggest that there should be no penalties for continued drug use," he said, "is to stick our head in the sand."

To be fair, it's not just the Bush team that is opposing the measure. Many in the rehab community are against it as well, arguing that the threat of jail is necessary to make addicts stick with their program. While drug-law reformers insist that addiction treatment should be removed from the criminal realm altogether, Bruce Hayden, the president of Spectrum Programs, a group of four rehab clinics, says that the threat of jail is "absolutely" necessary. "For the most part the criminal justice system and treatment system work very well together," he says.

But how well they work together has a lot to do with how much money defendants have. While first-offense possession of crack in Florida carries a maximum five-year prison sentence (15 years for heroin), most nonviolent defendants can opt for Florida's system of drug courts, designed to divert nonviolent addicts into treatment programs rather than prison. That's what Noelle Bush did. People who complete the treatment emerge with a clean criminal record.

It sounds like a great system, and in many ways it is. It's certainly far better than New York's, where mandatory minimum sentences send people away for decades. Randy Credico, a drug reform activist who heads the New York-based William Moses Kunstler Fund for Racial Justice, cites the case of a Long Island addict currently serving 12.5 to 25 years for a second-offense crack possession.

But there are two problems with Florida's system. McDonough concedes that there aren't enough drug courts to handle everyone eligible for them -- only half who would opt for drug court get in. And those offenders who want treatment instead of prison often have to find their own rehab center -- and a way to pay for it.

There are state-subsidized places within the various clinics, but there's a long waiting list for these, so some defendants go to jail for lack of treatment options. The problem has been exacerbated by recent budget cuts, which, according to a January article in the St. Petersburg Times, eliminated more than 600 subsidized beds -- a third of the total. (McDonough says he thinks the article exaggerated the loss of beds.) Those who don't go to treatment don't get their records cleared, Smith says, so if they're arrested again they can be charged as habitual offenders, which carries a doubled prison sentence.

"A lot of my clients have to suffer jail because they can't afford the kind of program that a prosecutor would find acceptable," says Smith. "If I've got a client with an unlimited budget, I can find a program for him that is probably going to satisfy everyone." Furthermore, he says, "programs that are designed for paying customers tend to be more accommodating," as Noelle Bush's has been. Smith says that the referendum would put the onus on the state, rather than the defendant, to find a treatment bed for everyone who qualifies for one.

Hayden agrees. "I would like to think that money should not determine whether you go to jail or not," he says. "But it does. Are we talking fair? I think we're talking reality."