Congress tries to ask why U.S. intelligence failed to predict the attacks, but Wolfowitz and Armitage only want to talk about why we must invade Iraq. 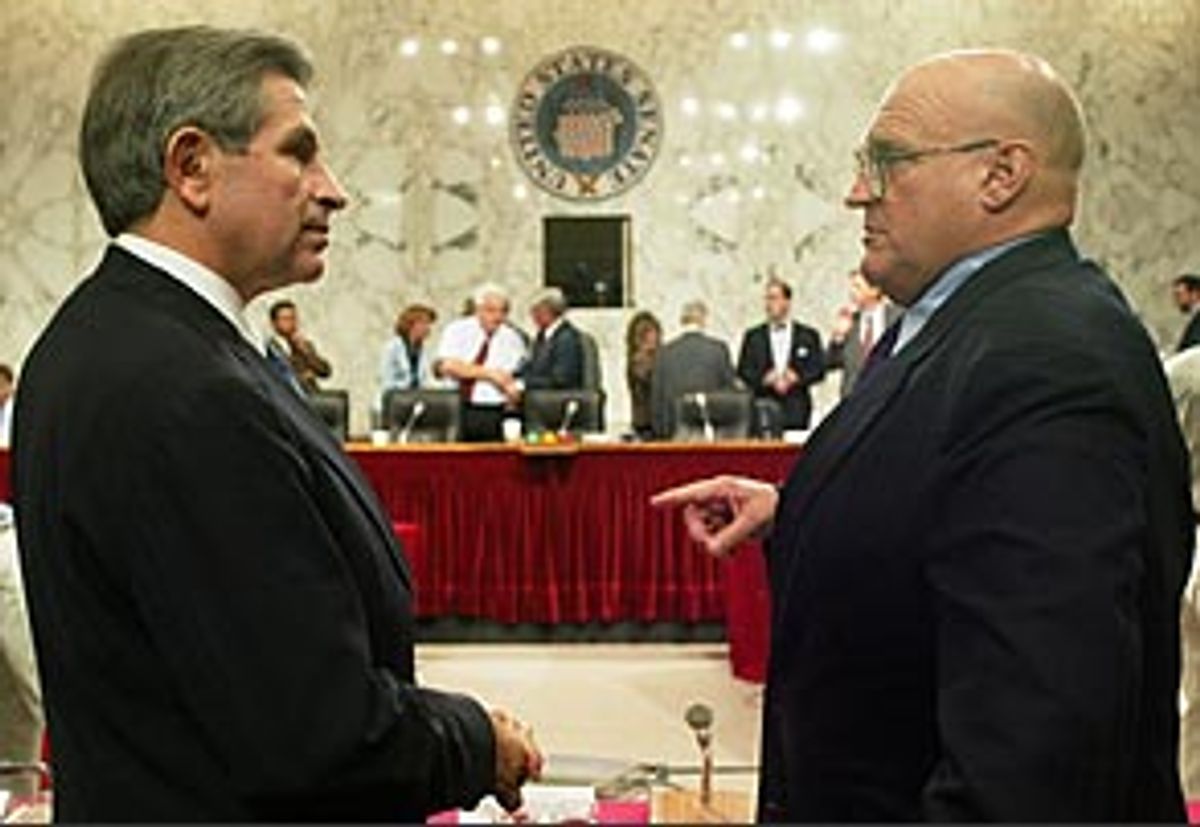 Anyone who doubts the Bush administration's singular focus on Iraq need only look to Thursday's hearings before the joint House and Senate Intelligence Committees.

Ostensibly, the session was about the lessons to be learned from the intelligence failures leading up to Sept. 11. But the deputy secretaries of defense and state, Paul Wolfowitz and Richard Armitage, used their appearances before the committee to rally support for military action against Saddam Hussein.

"If one were to compare the scraps of information the government had before Sept. 11 to the volumes we have today about Iraq's pursuit of [weapons of mass destruction], Saddam Hussein's history of aggression and hostility toward the United States, and factor in our country's demonstrated vulnerability after Sept. 11, the case the president made should be clear," Wolfowitz told the committee.

Throughout the morning, Wolfowitz took pains to use the Sept. 11 attacks as justification for an invasion of Iraq: "We cannot go back in time to stop the Sept. 11 attack, but we can take actions now to prevent some future threats," he said, alluding to Iraq. "Of course, that's precisely why we are here today, to examine how we may all work to prevent future threats to our nation."

Wolfowitz's effort to change the subject angered Rep. Nancy Pelosi, D-Calif., the committee's vice chairwoman. After a visibly angry Pelosi walked out of the hearing room, she told Salon that Wolfowitz's war cheerleading before the committee was "completely inappropriate."

"For the secretary to come in and use it as a platform to talk about Iraq, as if to say, 'But for Iraq this would not have happened' -- that isn't what this is about," Pelosi said. "The subject of this hearing is 9/11. It was not to spend the time talking about 9/11 being justification for going into Iraq."

Pelosi drew a strong distinction between her committee's work and the Iraq debate. "The information we had pre-9/11 was about plans and intentions to attack the United States. If they have any knowledge of plans and intentions of Iraq to invade the United States, they should let that be known to the American people. But don't try to diminish what we have here as if it's unimportant in comparison to the information they have about Iraq."

Pelosi said it appeared as if the administration was going to great lengths to move the focus off the committee's Sept. 11 investigation and back onto Iraq. "It may be, and that's why I was so unhappy," she said. "We were so respectful, but I expect a little respect in return, and what the secretary did in there shows a complete lack of respect for the work this committee is doing."

But if the administration embarked on a conscious effort to transform the hearings into a debate about Iraq, the strategy seemed to work. Sen. Richard Shelby, R-Ala., co-vice chairman of the joint committee and a vocal FBI critic, limited his comments Thursday to boosting plans to take action against Iraq. And Rep. Leonard Boswell, D-Iowa, a Vietnam veteran, raised the specter of another unpopular war like the one he fought in. "There's a lot of doubt out there," Boswell said. "We've got to make the case to the American people. We don't want another Vietnam situation."

That comment was met with a response from Deputy Secretary of State Richard Armitage, who echoed Wolfowitz's sentiment that war against Iraq was a crucial part of the overall struggle against terrorism.

Armitage called Iraq an imminent threat to American interests, and cautioned members of the committee to "imagine what kind of hearing we would be having" if we waited for Saddam Hussein to use biological, chemical or possibly nuclear weapons against the United States.

Clearly, the administration would rather be having a debate over Iraq than one that might implicate administration officials' failures to prevent the Sept. 11 attacks. Sally Regenhard, mother of a firefighter who was killed in the Trade Center collapse, said she wished Thursday's hearings had focused more on the breakdowns that predated last year's terrorist attacks.

"I believe my son was betrayed by the system," she said. "It was dysfunctional, it had breaks in it, and I want to see it fixed -- to make sure the CIA, the FBI, the INS, the DOT -- that everyone speaks to each other and communicates to safeguard the American people."

Regenhard, who described herself as "a big President Bush supporter," sounded fatalistic, if a tad disappointed, in what Wolfowitz and Armitage had to say Thursday. "Everybody pushes their thing. Everyone has their shtick," she said. "I felt they were politicking a little, but what can I tell you? This is Washington."

During the committee's afternoon session, former national security advisors Brent Scrowcroft and Sandy Berger shared their thoughts about the rise of al-Qaida as a global menace, and what could be done about it.

Scrowcroft said during his time as NSC chairman, in the first Bush administration, terrorism did not pose the threat it now does. When he was in office, Scrowcroft said, the focus was still on the Soviet Union, and the impact of its demise. But he indicated that budget cuts to intelligence agencies during the Clinton years may have played a part in our inability to prevent the Sept. 11 attacks.

That was gently but firmly rebuffed by Berger, who served as Clinton's national security advisor. During his time in office, Berger said, "our understanding of Osama bin Laden evolved from terrorist financier in the early '90s to an increasingly rabid, magnetic and dangerous galvanizer of anti-American hatred in the mid- to late '90s."

Berger said that change was reflected in boosted budgets for counterterrorism efforts, particularly within the CIA. The back-and-forth between Berger and Scrowcroft illuminated some of the subtle but unmistakable finger-pointing that has marked the entire debate over what went wrong on Sept. 11.

Berger had harsh words for the FBI under the guidance of Clinton appointee, and later nemesis, Louis Freeh.

"What we have learned since 9/11 makes clear that the FBI, as an organization, was not as focused," he said. "Until the very end of our time in office, the view we received from the bureau was that al-Qaida had limited capacity to operate in the U.S. and any presence here was under surveillance."

Berger advocated a wholesale restructuring of the national security apparatus that goes beyond anything that Congress or the president is currently considering with the creation of a new Homeland Security Agency.

"I encourage this committee to consider proposals to separate the [director of central intelligence] and CIA director positions so the DCI can focus primarily on community issues, and not just CIA concerns," he said. "In addition, I would end the practice of having every intelligence community agency develop its own relationships with foreign counterparts and give the DCI authority to coordinate all intelligence with other countries."