Whip me, spank me, correct my spelling mistakes. James Spader stars in a weird tale about the mysteries of desire. 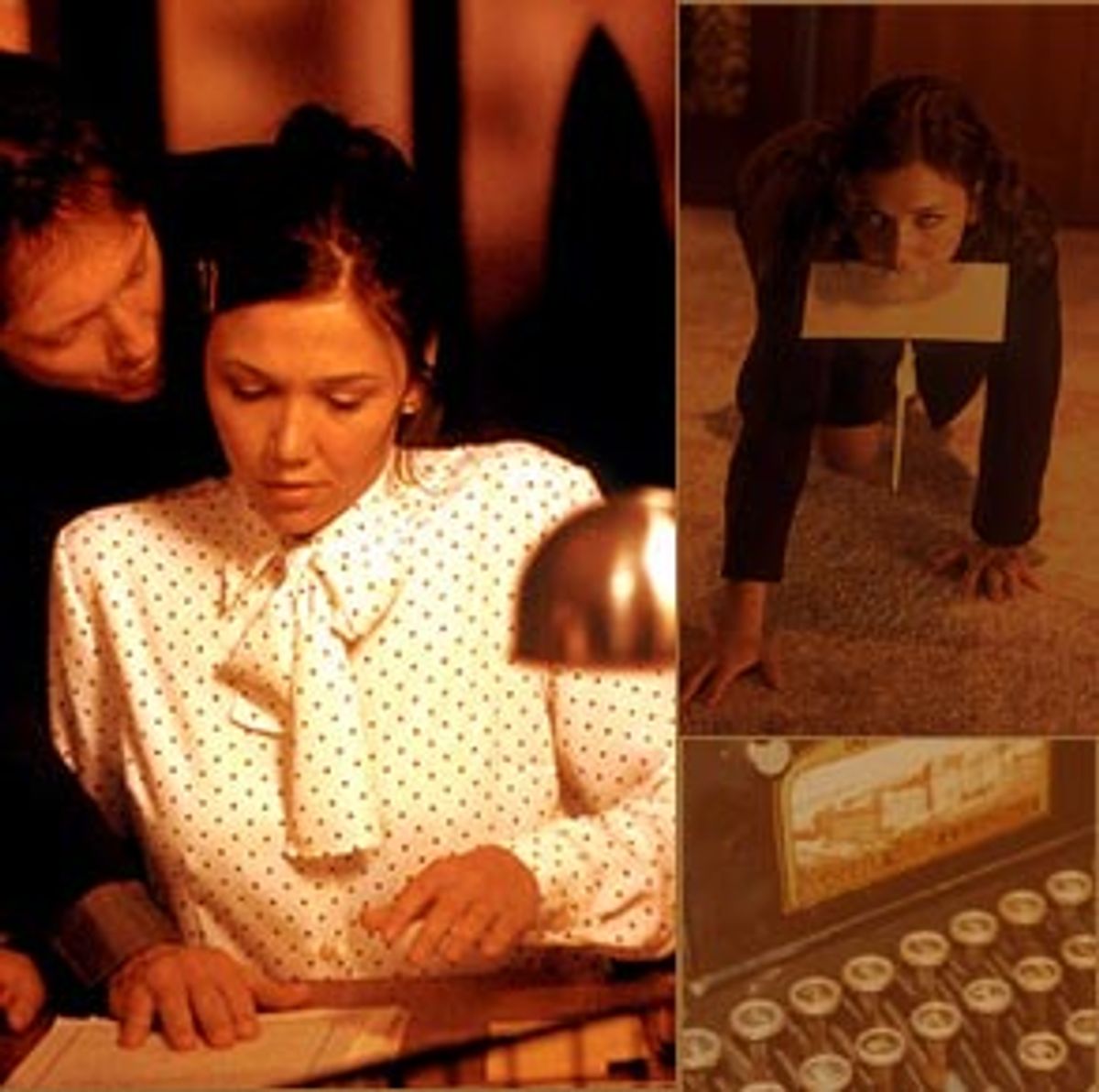 All good humanists profess to love movies that cast light on the subtlest angles of human experience. But how many are going to line up to see a movie about spanking? Or, more specifically, how many are even going to realize that they ought to?

When it comes to movies that explore the vast mysteries of life, we've all been well trained to accept the most banal life-force crapola about love, death and family relationships. But sex -- which, you could argue, is the source of life's most damnably confounding mysteries -- is still the final frontier. There are plenty of trembling, anxious watchdogs of the culture who have been claiming for years that there's too much sex in American movies, when the reality is that there is hardly any at all. What we do have is a whole lot of people rolling around in artfully mussed beds, sheets arranged to cover their privates just so -- a hurried, embarrassed shorthand stroke for something whose letters we don't dare to spell out.

Steven Shainberg's strange and wonderful "Secretary" spells out the letters and more, but not in an orderly, comfortable way -- it's more as if he were spilling them like dice out of a cup, as a kind of jarring reassurance that they're not going to immediately make sense to us. That Shainberg does ultimately make sense of them (as much sense as we can reasonably demand of the human heart and the other organs that spring to attention at its merest whim) will probably rattle some people. "Secretary" has already been referred to as "pornographic" and "disturbing" by some critics. But both of those words suggest a kind of deliberate prurience that the movie just doesn't have. It's a liberating, kindhearted picture, one whose ending brings with it the feeling that something has finally been shaken free. How comfortable you feel with that is completely up to you.

"Secretary" -- which was adapted, with significant changes, from a terrific short story by Mary Gaitskill -- is also extremely funny in places, as the truest movies about sex must always be. But its funniest moments have very serious underpinnings: There are times when "Secretary" is difficult to watch, simply because it's never easy to watch a character in emotional pain. Maggie Gyllenhaal plays Lee Holloway, a socially awkward, withdrawn young woman who has just been released from a stint in a mental hospital and has returned home to live with her disjointed family, including a troubled alcoholic father (Stephen McHattie) and a quiveringly sunny, overprotective mother (Lesley Ann Warren). Lee has to find a job and begin an adult life, now that her emotional problems have ostensibly been cured: Since the seventh grade, she has been ritualistically and obsessively cutting herself. She keeps a box of sharp implements and antiseptic hidden under her bed, its cover decorated with heartbreakingly girlish metallic butterfly stickers. One of her favorite tools is a pastel-colored plastic ballerina figure, the toe shoe of one extended leg fetishistically sharpened into a stiletto. Lee knows she needs to kick this behavior once and for all, but she just can't bring herself to throw away that box.

Lee does find a job, landing at the office of E. Edward Grey (James Spader), a mysterious lawyer who needs her only to answer the phone and type letters (never on a computer but on a clackety old IBM Selectric dinosaur -- and that's only the beginning of his fetishes). Mr. Grey keeps rare, exotic flowers behind glass in his office; he also has a row of red markers lined up just so in his desk drawer, although we don't, at first, know why. He's clearly an odd guy. Before Lee enters his office for the first time, he sits nervously at his desk, twitching and fiddling with things; he takes a quick look at his wild-eyed reflection in a mirror and smooths his hair roughly, like an ape mimicking a man getting ready for a hot date.

And before long, Mr. Grey has revealed his quirks to Lee in all their shameful glory. After just a few weeks in the job, Lee clicks into the luxurious monotony of it -- it suits her intensely private, buttoned-up nature -- and begins to develop something of a romantic crush on her boss. He seems to have something else in mind: He spends weeks eyeing her nervously, in her stiff bow-blouses, flesh-toned knee-high stockings, and clumpy black moccasin shoes (a depressive's idea of secretary wear). One day, he circles one of her typing errors with one of those thick red pens he's been hoarding -- at last, we know what they're for -- and calls her into his office, where he orders her to place the letter on his desk, bend over and read it aloud. He then proceeds to spank her soundly.

What develops between them -- the current that begins with Mr. Grey's shame and excitement over his own desires and runs its way to the very nerve endings of Lee's bottom -- at first seems like your textbook case of mutual and rather kinky obsession. Lee realizes that the spankings excite her like nothing else in her life; there's a trenchantly funny moment when she tries to convey an inkling of this to her befuddled, sweet-natured boyfriend (played by Jeremy Davies), who can't conceive of the thrill of sex in anything but the gentlest terms. "I didn't hurt you, did I?" he asks, after she finally surrenders to his plain-vanilla grunting and grinding. "No," she replies languidly, staring beyond his shoulder and into the reaches of some erotic deep space where he'll never be able to follow.

What has really happened is that Lee has tapped into the deepest corners of her most private self -- forget whether it's a self that you or I or anyone else approves of. What matters is that she no longer feels compelled to cut herself. She begins to dress differently and carry herself more confidently; she indulges in erotic daydreams in which she and Mr. Grey dally in a landscape of bright blue skies and psychedelic orchids. And in real life, her desire transmutes at first into something like love, and then into love itself, which complicates and threatens the fragile relationship.

If you're familiar with Gaitskill's story, Shainberg's movie isn't going to be the one you expect. A less imaginative filmmaker might have done the story a disservice by turning it into a grim little realist picture, with closeups of fingernails bitten to the quick and seedy-looking office interiors furnished with grayed-out file cabinets and workaday swivel chairs. Shainberg knows instinctively that Gaitskill's story isn't about sexual aberration but about a peculiar and precious kind of understanding between two people. In adapting it, he has expanded it, fleshed it out, reimagined it, essentially recasting it as a fairy tale about erotic love. In its ultimate rush of honest feeling, if not always in its tone, it resembles the lovely and little-seen Canadian picture "Kissed," about a woman who yearns to make love with bodies that are no longer alive. (To call "Kissed" a movie about a necrophiliac is like calling "Moby-Dick" a book about a whale.)

Shainberg and cinematographer Steven Fierberg render the movie in colors that are soft-edged but saturated -- they're vivid, but instead of popping off the screen, they seem to hover just beneath its surface, like bright undersea flora and fauna. Shainberg's narrative style seems overly efficient and deliberate at the beginning, but you quickly see how it serves the story: In their confusion and tentativeness, the characters are always taking two steps forward and one step back. Shainberg's comfortingly methodic storytelling works as a mirror of the elusive orderliness that Lee and Mr. Grey desperately seek in their own lives.

"Secretary" hinges on the interplay between Gyllenhaal and Spader: The two of them do the classic romantic-comedy advance-and-retreat so beautifully that it feels like something they've built together -- a strong, invisible core for the movie -- rather than simply a case of good actors responding well to one another. Spader plays Mr. Grey like a one-man mystery unfolding before us -- we start out being wary of him, for good reason (his need for control isn't always pretty), and we warm to him only gradually, not quite knowing how to read his sudden and puzzling blurts of kindness. When he expresses concern for Lee, or curiosity about her, it's like an electrical current jerking through him. At one point he scrutinizes her and says, "There's something about you. You're closed up, you're tight ... Do you ever open up?" (To which she responds, simply and with no pretense of evasion, "I don't know.") Spader gives a sensational performance, building it out of fragile, shaky layers. It's the only way for an actor to earn sympathy for a closed-off man: If you reveal too much too soon, his guardedness amounts to nothing.

Gyllenhaal, because her character allows it, wins our sympathy almost immediately. It's painful to watch her disfigure herself, which is precisely why it's so joyous to watch her lose herself in the sex games she plays with Mr. Grey: You want nothing but relief for this suffering character, and if spanking offers it, then why shouldn't she have as much as she wants? Gyllenhaal's performance is a direct challenge to anyone who would dare pass judgment on the movie's sexual morality. How can we shake our heads in shame and pity for Lee when she's clearly having the time of her life? Neither the movie nor Gyllenhaal's performance allows for that kind of superiority. Gyllenhaal's Betty Boop eyes reflect the cartoony playfulness of Lee and Mr. Grey's verbal and sexual interplay. But they also show us the intimacy that's building between them, an intimacy bred of both loneliness and unnameable desires. Pass judgment on their actions if you absolutely must. But as Gyllenhaal and Spader play these characters, there's no way to pass judgment on their loneliness and isolation. The movie's ultimate question is, are we going to let ourselves get hung up on sex at the expense of our empathy? And if we do, what kind of human beings are we?

Whether or not you understand or respond to these characters' specific kinks is beside the point. "Secretary" isn't ultimately about spanking, submissiveness, humiliation, domination or shame -- it's too funny and delicate to be summed up so conveniently or judgmentally. Terrific sex may be hard to come by in this world, but tenderness and understanding are infinitely harder: The great tragedy of being human is that we want them all.

If you're sensitive to spoilers, stop reading now. Because admittedly, it's giving a little something away to tell you that "Secretary" is the happiest of sexual fairy tales, in which two people with well-matched proclivities live happily ever after, perfectly attuned to each other's illicit longings, in a place where the sheets have been rumpled by real people and not by a stylist. It's an implausible ending, and yet the only possible one. To deny these characters each other's company would be to trample on the hard-won tenderness between them. And that's a kind of aggression that this gentle and surprising movie has no use for.