Crimes shown backward, heroes sent back to high school, and yet another trip to the '60s. This week's lame new TV shows prove a trip down Memory Lane can be a snooze. 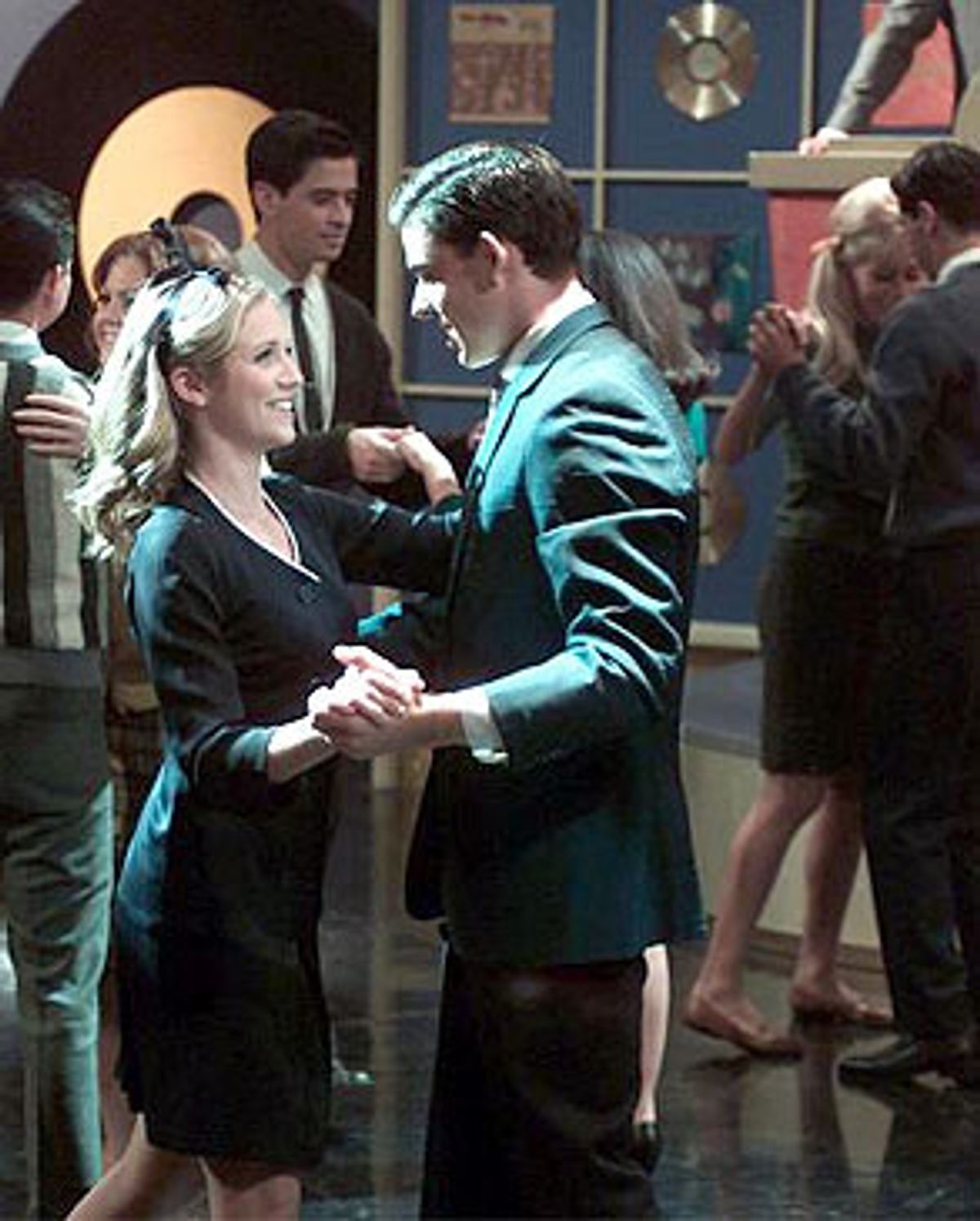 Are the networks trying to make themselves obsolete? The only remarkable thing about this week's prime-time debuts is how they all managed to crowd into the same tired premises. The sitcoms play like advertisements for the death of the sitcom. The dramas keep playing cops and doctors. Best yields in this week's flaccid crop are two police procedurals that share our post-9/11 fascination with reconstructing the past and manage, just barely, to rise above the median: "Without a Trace," an FBI missing-persons drama from "CSI" producer Jerry Bruckheimer; and "Boomtown," an L.A.-set cop show that shows a crime from the various perspectives of different characters.

Right on the heels, literally, of "Meet My Folks," NBC meets the parents again in this familiar comedy about a wimpy son-in-law and his tough-guy father-in-law. Newlyweds Matt (Elon Gold) and Alex (Bonnie Somerville) move in with her parents so that Matt can attend culinary school. Dad Victor (Dennis Farina) owns a fleet of armored trucks, so you know he's a tough guy. Needless to say, he's none too thrilled with his son-in-law's vocation. "So, your plan is to what? Quit your job, hit me up for some cash and go to school in an apron?"

In a just world, "Hidden Hills" would be redolent of vintage John Updike. In this world, it's "The Mind of the Married Man, Suburban Edition." Justin Lewis and Paula Marshall play Doug and Janine Barber, a married couple who haven't had sex in five weeks and two days. Just imagine! To make matters worse, their best friends Zack and Sarah (Dondre T. Whitfield and Tamara Taylor) have sex all the time. Even during "Spongebob Squarepants"! In fact, "Spongebob Squarepants" turns them on. Just imagine!

"Will & Grace" creators Max Mutchnik and David Kohan drew on their experiences as morning-show producers for this parody about a low-end Miami broadcast featuring two preening, talentless hosts and an anxiety-ridden station manager. Apparently, this is their revenge.

"Good Morning, Miami" is the story of Jake Silver (Mark Feuerstein), a successful young TV producer who takes a meeting in Miami so that he can visit his gambling granny, Claire (Suzanne Pleshette), and winds up falling instantaneously in love with the show's hair stylist, Dylan (Ashley Williams). Tossing his career out the window, he takes the job, only to learn that Dylan is dating the insufferable host, Gavin Stone (Matt Letscher). Think "News Radio" and "The Mary Tyler Moore Show," only maudlin. Let's just hope the studio audience keeps the unrequited love-induced "Awwws" to a minimum.

The shrinking man's "CSI." Produced by Jerry Bruckheimer, "Without a Trace" follows a special FBI Missing Persons task force dedicated to tracking down missing persons using only advanced psychological profiling techniques. You know, like the missing girl has a picture of a man on her desk ... Let's bring him in! Anthony LaPaglia plays gruff (but aren't they all) senior agent Jack Malone, who spearheads a group of ace observers of human nature.

Agent Malone has such great intuitive gifts that he can literally see the missing person after taking a quick look at his or her natural habitat. The missing person haunts each episode, appearing and disappearing as clues appear and vanish. The last 24 hours before each victim's disappearance is reconstructed, thanks to phone records, photographs and highlighted passages in dog-eared books. It makes you wonder what would happen if you disappeared and someone found your ninth-grade copy of "Catcher in the Rye." It also makes you wonder if FBI agents can say things like, "If he's the last person she called, then he's the first person we need to talk to," to their colleagues without being laughed out of the room.

"Without a Trace" adopts the requisite cop-show clipped pace and poker-faced acting, but the procedural approach is catchy. There's something irresistible about a forensic drama that hooks you with hints at the ending and works backward from there. This one's for the more squeamish sleuth.

A Philadelphia cop, Mike Olshansky (David Morse), gets kicked off the force after helping himself to some cash during a drug bust (he considers it hazard pay), and winds up behind the wheel of a cab. But a fare is never just a fare to Mike, as it turns out, because no sooner can he say "Where to?" than he is handed a case to solve, freelance-style. You can take the Polish Catholic boy from Philly out of the precinct, but you can't take the precinct out of the cab driver, or something like that.

It's an absurd premise, but at least it's original. The same thing can't be said for the first episode's story lines, however. Mike single-handedly rescues a cocky yuppie from a gang of roving thugs, and then helps a distraught father track down his abducted teenage daughter to the unkempt abode of an online pedophile. (Is it just me, or are the networks obsessed with child molestation?)

Morse is sympathetic as a morose desperado who has lost it all -- his career, his wife, his son, his gun license. At least he still has his best friend and drinking buddy, Father Tom "Grizz" Grzelak (George Dzundza) to keep him in morality lessons.

This season's other show about what it would be like to return to the '80s and relive high school after you have screwed up your life. In the hourlong ABC "dramedy" version (the half-hour sitcom, "Do Over," premiered on the WB last week), a 30-year-old door salesman named Travis Glass (James Bulliard) gets a high-voltage shock to the head and wakes up 16 again. (In "Do Over," a 34-year-old paper salesman gets a high-voltage shock and wakes up 16 again.)

The similarities don't stop there. Both characters return to high school on the day of their big speech to the student body -- a speech they will flub, thereby ruining the rest of their lives. Both seize the opportunity to change the speech into a lesson in seizing the day. ("Do Over" at least acknowledges the "Dead Poets Society" rip-off.) On both shows, Dad (here played by the sublime Jeffrey Tambor) is an insensitive boor, Mom (Bess Armstrong) is cheerfully dissatisfied and one sibling is a waste of space. Each also features a best friend (here Tyler Labine, in full Jack Black impersonation) who believes that our hero has just come back from the future. Curiously, both shows have so far refrained from mentioning the seminal '80s film franchise that started it all, despite being awash in '80s pop-culture references.

If this is a contest -- and it sure looks like one -- then "That Was Then" wins by a narrow margin. The hourlong, single-camera format doesn't preclude comedy, but the hokey half-hour sitcom format rules out any possibility for reflection. Not that "That Was Then" shows much promise in this area, but there's always hope. Ultimately, "That Was Then" suffers from the same disease that affects most television: The idea almost always overshadows the execution.

Remember when Father thought he knew best, Mom was a tremulous Stepford wife, the Vietnam War was kicking into gear and the president was assassinated? Ah, the innocence. Period costumes and golden oldies can make any old days look like good old days. It's just lucky for everybody a generation came along to change all that, so that 10 years later Mom and Dad would be divorced and the kids would be on drugs. Set in late '60s and early '70s Philadelphia, "American Dreams" tells the story of the Pryor family, a conservative, middle-class, Catholic clan with four children. Two of them are teenagers, which can only mean one thing: Any day now, Dad is going to start screaming about somebody's hair.

Brittany Snow plays Meg Pryor, a 15-year-old who lives to dance on "American Bandstand." ("American Bandstand" plays a big part in "American Dreams," which should come as no surprise since Dick Clark is one of the show's executive producers.) Meg's older brother J.J. (Will Estes) is a high school football star who is starting to strain against the plan his father, Jack (Tom Verica), has laid out for his life, which involves a football scholarship to Notre Dame. J.J.'s girlfriend Beth starts trailing all sorts of upsetting notions into the Pryor house -- notions about psychotherapy and the Pill, courtesy of her progressive parents. And Jack's wife, Helen (Gail O'Grady), is meeting some interesting new gals who seem on the verge of introducing her to the other F-word. Jack is wondering when his "American Dreams" (deeply linked to fluffy green lawns) started looking like a nightmare to everyone but him.

"American Dreams" is as soft-focused and jelly-bellied as a close-up of Shelley Winters, and the message gets a little garbled in the nostalgia. You might find yourself wondering whose side you should be on. Is Dad innocent or ignorant? Are the kids going to change the world or mess it up? In this day and age, the mean old priest/coach who tells J.J. to suck it up and play football for the team seems a little insensitive to his tender, if inchoate, feelings. But, then, what? The kid wants to skip college so he can spend the next 10 years finding himself? If this is going to turn into another story about Woodstock and how much everybody cared or whatever, here's hoping he stays in school and spares us.

A Los Angeles-based cop drama that takes a tip from Kurosawa's "Rashomon," "Boomtown" reconstructs a single crime from different points of view. In the first episode, a drive-by shooting at a youth center is seen through the eyes of a reporter, Andrea Little (Nina Garbiras); her lover, Deputy D.A. David McNorris (Neal McDonough); his volunteer wife; and the cops who investigate the crime. Detective Joel Stevens (Donnie Wahlberg) is a quiet guy with troubles at home. His partner, Detective Bobby "Fearless" Smith (Mykelti Williamson), walks around with a list of things to do before he dies (one of which is to sleep with a hooker, played here by the same actress who plays the porn mom in "Hidden Hills"). Scenes are revisited as characters go their separate ways, with title cards separating one story from another.

The characters are more finely drawn than on most cop dramas, and the dialogue is refreshingly digressive and true-to-life. Executive produced by Graham Yost and Jon Avnet, "Boomtown" is stylishly shot and makes good use of its City of Angels setting.

Coming next week: Just think of "Still Standing" as "King of Queens," only the same; a plus-size "That Girl" in "Less Than Perfect"; Alfred Molina plays a dissolute British novelist in "Bram and Alice."