The former vice president takes the gloves off, saying Bush has squandered the world's goodwill, is failing to focus on the war on terrorism and could be creating a global "reign of fear." 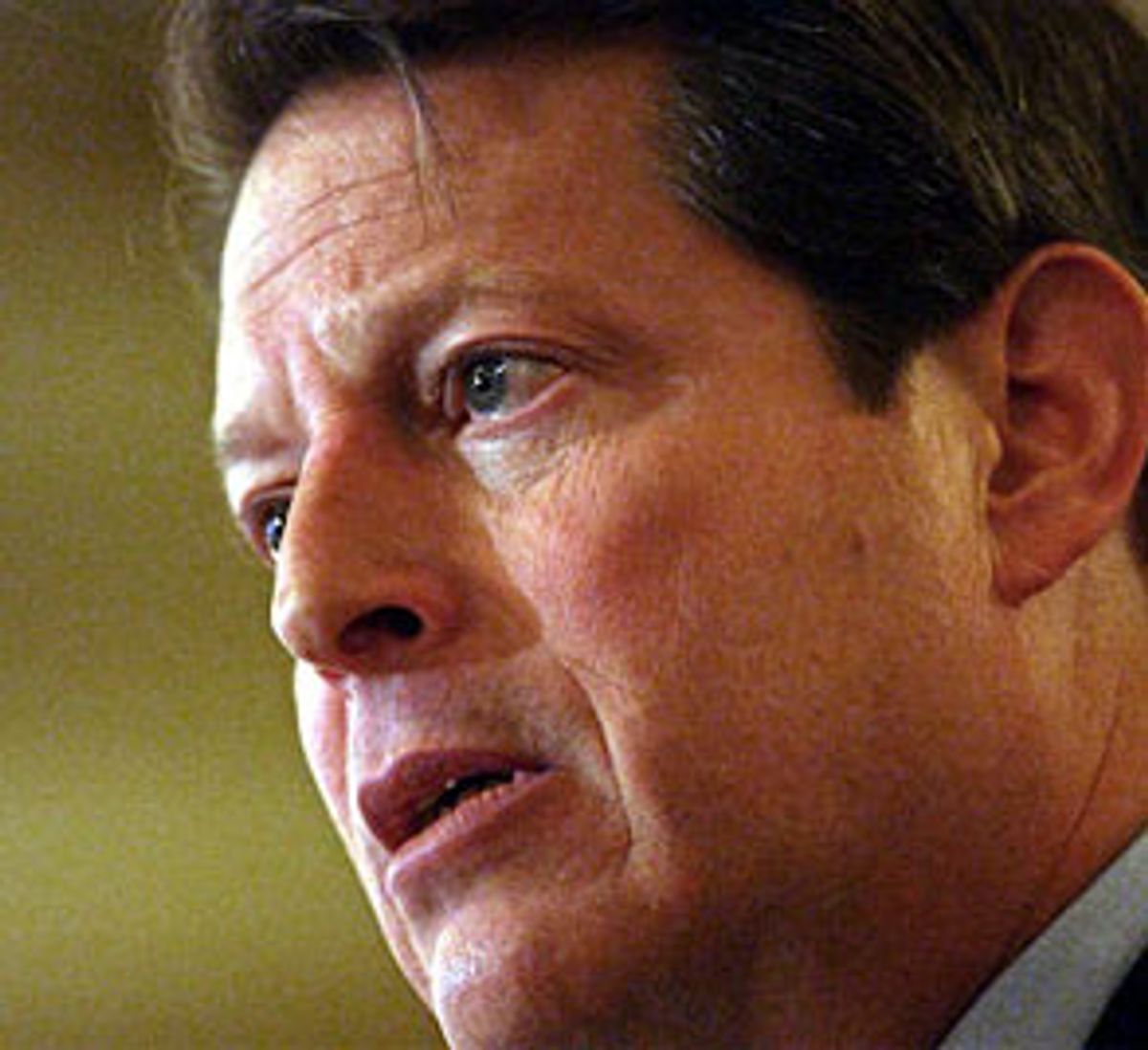 With Congress already debating a resolution that would allow a U.S. invasion of Iraq, former Vice President Al Gore warned Monday that unilateral military action to topple Saddam Hussein would divert the nation from the more crucial war on terrorism, possibly increase the threat from Iraq, anger the rest of the world and saddle the staggering American economy with a huge war bill.

Gore's speech, delivered to a cheering crowd in San Francisco, was the most comprehensive and the most withering attack on Bush policies to date by a potential Democratic presidential contender. While acknowledging Iraq as a "serious threat" and describing Saddam as "evil," Gore charged that Bush's inept handling of the war against Afghanistan and his near-unilateral campaign against Saddam were undermining U.S. foreign policy goals and the nation's credibility abroad.

He blasted Bush for failing to stabilize Afghanistan, nine months after routing the Taliban from power. He accused Bush and the Republicans of cynically using Iraq as a political issue in the weeks leading up to November's midterm elections. He charged that Bush's stated policy of unilateral action is turning even allies against the United States. And he warned that the new doctrine announced last week by the administration, asserting the right of the United States to take unilateral, preemptive action against any country perceived as a threat, would set a precedent encouraging other countries to take preemptive action, creating a global "reign of fear."

"I am deeply concerned that the course of action we are presently following with respect to Iraq has the potential to seriously damage our ability to win the war against terrorism and to weaken our ability to lead the world in this new century," Gore said.

"In the immediate aftermath of Sept. 11, a year ago, we had an enormous reservoir of good will and sympathy and shared resolve all over the world," he added later in the speech. "That has been squandered in a year's time and been replaced with great anxiety all around the world, not primarily about what the terrorist network is going to do, but about what we are going to do."

Most of the pointed criticism of Bush's Iraq policy in recent weeks has come from Republicans and others with close ties to the military establishment -- men like retired Gen. Brent Scowcroft, who served as national security advisor to Bush's father during the Gulf War. Democrats have agonized over their answer to Bush's war plans, with few willing to criticize his policies for fear of a voter backlash. Most, in fact, predict that Bush will win broad bipartisan support for his Iraq resolution, probably in a vote just weeks before the election.

Among a handful of potential presidential contenders, several have raised muted questions about the fine points of his approach, but most have backed Bush's apparent goal of winning regime change with a preemptive strike. Only Sen. John Kerry, a Massachusetts Democrat and Vietnam veteran, has sharply criticized Bush policy.

Why Gore decided to speak so bluntly on such a sensitive issue is unclear. One possibility is that as a presidential candidate he wanted to make a bold move to break away from the Democratic pack. Another is that he had decided not to run in 2004, and so felt free to speak his mind. He said Monday that he had not yet decided whether to run.

Gore's statements seemed certain to energize the debate about the war among Democrats, possibly slowing Bush's and the GOP's political momentum as the November elections approached. Coming from a senior politician, they could test the waters and give cover to Democrats fearful of speaking out against the war.

Gore, also a Vietnam vet (as a journalist), in recent months had been largely silent on Iraq. In February, just five months after the Sept. 11 terrorist attacks, he appeared before the Council on Foreign Relations in New York and offered mostly praise for Bush, who had defeated him in the 2000 presidential contest after a controversial ruling by the U.S. Supreme Court. The nation was moving toward a "final reckoning" with Iraq, Gore said in the February speech.

But even though Iraq was then a back-burner issue, Gore also warned that the multilateral coalition Bush had assembled for the war on terrorism could fall apart if Bush did not show "a more evident respect ... for the views and interests of its members."

In his 46-minute speech Monday before the Commonwealth Club of California, Gore pressed that argument with vigor, systematically criticizing Bush's policies on terrorism and Iraq and at times suggesting that the Bush presidency compares poorly with that of his father during the Gulf War.

Gore's fundamental premise was simple: The nation's top priority should be the war on terrorism, and it should be prosecuted carefully but without compromise. Those who planned the Sept. 11 attacks have thus far "gotten away with it," he said, while Bush's attention seems to be drifting to "some other enemy whose location may be easier to identify."

"I do not believe that we should allow ourselves to be distracted from this urgent task simply because it is proving to be more difficult and lengthy than was predicted," he said to loud applause. "Great nations persevere and then prevail. They do not jump from one unfinished task to another."

At home, Gore said, the Bush administration resisted the call to create a special office for domestic security. And, he charged, the White House has used the war on terrorism as a pretext for compromising constitutional rights. Noting that U.S. citizens have been swept up in the anti-terrorist dragnet and then detained for weeks without formal charges, he said: "That this can be done on the say-so of the president of the United States or those acting in his name is beyond the pale and un-American."

He slammed the Bush administration for failing to bring stability to Afghanistan after routing the Taliban. "Incredibly ... despite pledges from President Bush that we would never again abandon Afghanistan, we have done precisely that," Gore charged. The failure to bring in an international force of 30,000 to 35,000 troops means that the new government does not even control all of Kabul, he said, and has left the countryside in the hands of warlords.

Aware of the backlash that could follow his criticism against the wartime president, Gore repeatedly stressed that Hussein is a threat and that the U.S. is justified in seeking regime change. But, he said, Bush has yet to prove that Iraq presents an immediate threat to the United States or its interests. Therefore, he said, the U.S. should work to defeat al-Qaida and, at the same time, should be building a global coalition to take on Saddam "in a timely manner."

Conditions in the Middle East are more difficult for the U.S. now than they were on the eve of the Gulf War in 1991, Gore said. At the time, as a U.S. senator from Tennessee, he broke with most fellow Democrats to support that war. In that case, he said, action was clearly justified because Iraq had invaded Kuwait. The first President Bush "patiently and skillfully" built a global coalition, he said, with many Arab nations and other countries providing troops and funds for the effort. The U.N. had passed a strong resolution against Saddam. Only then -- and after the 1990 midterm elections -- did the invasion begin.

But the younger Bush is ignoring much of that wisdom and pursuing a more divisive course, Gore said. If the U.S. follows the vision of hawks allied with Bush, the debate will be played out in the charged atmosphere of an election, with hundreds of billions of dollars in costs borne largely by U.S. taxpayers and world anger almost a certainty.

Further, Gore said, the difficulty of nation-building in Afghanistan augurs grave problems that might follow if the U.S. invades Iraq. If central authority collapses in post-Saddam Iraq as it has in Afghanistan, he said, terrorists could slip across porous borders and perhaps obtain weapons of mass destruction now closely held by Saddam's forces.

Bush last week sent a sweeping resolution to Congress, seeking unlimited authority to use military force or other measures against Iraq. Some analysts have suggested that the wording of the measure would allow military action against other countries as well, with or without the blessing of the United Nations.

Gore agreed that that resolution is "much too broad," and he urged Congress to "severely" narrow its scope. Instead, Gore proposed, Congress should urge Bush to work with the U.N. Security Council to seek Saddam's compliance and to assemble "the broadest possible international support."

Gore's speech was repeatedly interrupted by applause and cheering, and at one point the former vice president quipped that he was glad to be back in California, a state that supported the administration of former President Bill Clinton even in difficult times. In a question-and-answer session after the speech, Gore was asked whether he had decided to seek the Democratic nomination for president in 2004, but he said he would make that decision in December.