Some 600 immigrants have been deported after secret hearings since the 9/11 attacks. Now the policy appears headed for the Supreme Court. 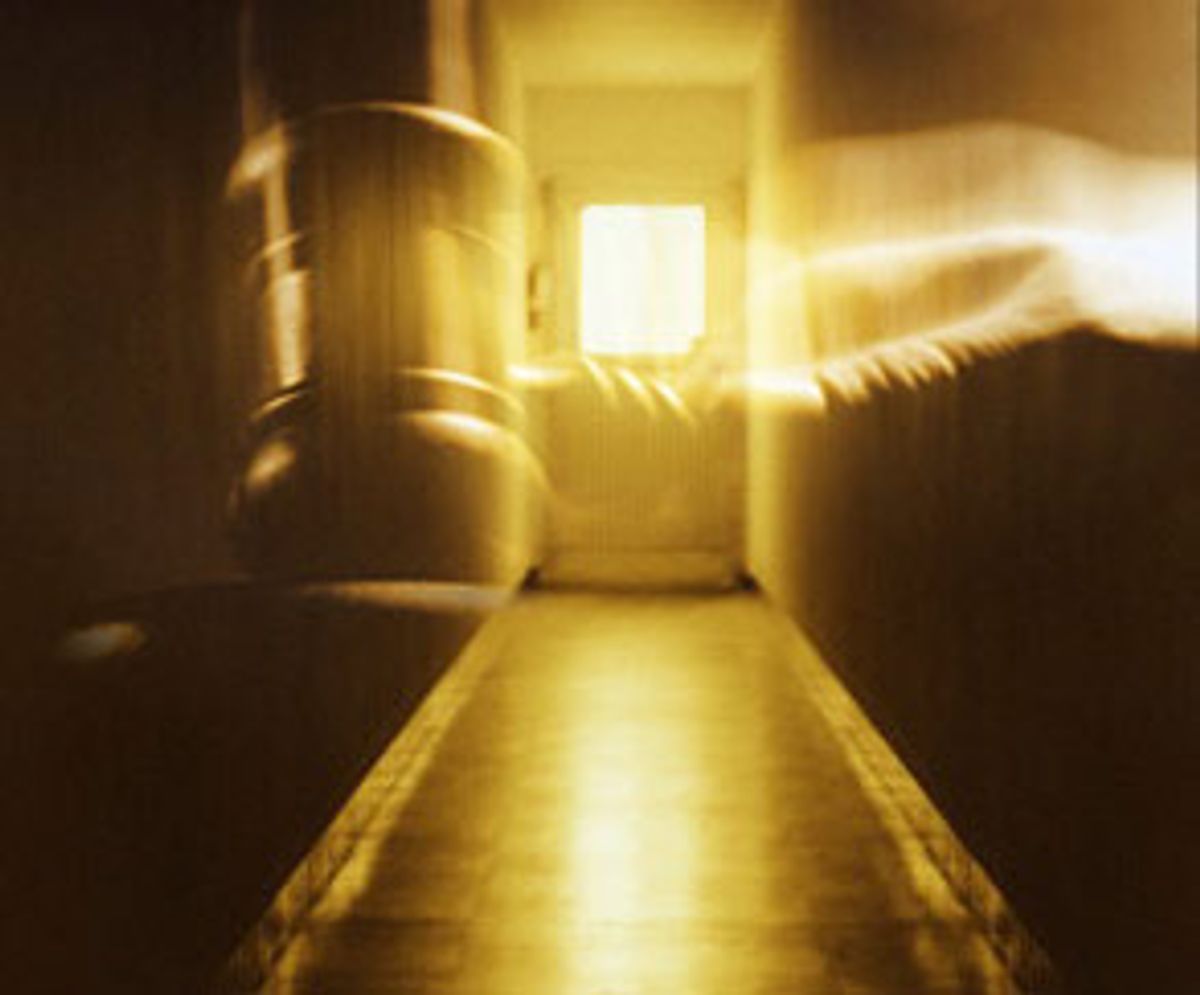 Federal immigration agents came knocking at the door of Rabih Haddad in Ann Arbor, Mich., last Dec. 14 when he was home with his four children. Armed and grim-faced, they immediately searched and secured his house, demanding to know if he had any weapons. He showed them some ceremonial Chinese swords on the mantelpiece and a shotgun he owned for hunting, which they confiscated. He was then led off to jail, leaving his children, aged 8 through 15, terrified.

Today, after more than nine months in solitary confinement, Haddad is moving uncertainly toward a hearing that could result in his deportation to Lebanon. He doesn't know what evidence the government will use against him. He had long ago notified the U.S. Immigration and Naturalization Service of his tourist visa status, and he had filed an application with the INS under the last Clinton-era amnesty for a green card. But for Haddad and other Muslim immigrants caught in the post-Sept. 11 crackdown, none of that seems to matter.

More than 1,000 are in custody, deemed to be "terrorist connected." Some 600 have already been deported after hearings closed to the press, the public and even the immigrants' families. But now two federal appeals courts, one in Philadelphia and the other in Cincinnati, are about to present the U.S. Supreme Court with the question of whether the federal government has a right to deport whole classes of people in such secret hearings.

The 6th U.S. Circuit Court of Appeals, based in Cincinnati, has already reviewed Haddad's case and ruled that such secrecy is inimical to democracy. The 3rd Circuit Court of Appeals in Philadelphia, meanwhile, appears ready within a few weeks to issue a contradictory ruling: that the government can conduct such hearings in complete secrecy.

For many Americans, caught up in a fear of further terror attacks, the plight of Haddad and other Muslim immigrants may not be a major concern. Perhaps, though, they should talk to his wife, Salma Al Rashaid, and ask her about their 8-year-old, American-born son, Rami, who watched his father being hauled away in handcuffs.

"It has been really hard for him," says Rashaid, 37. "He can only see his father through thick Plexiglas [during rare jail visits]. He's totally confused, and asks, 'Why are they doing this to my father?'"

Haddad has lived in the U.S. for over two decades, and is the assistant imam of the Ann Arbor mosque. The government's real interest in Haddad is his position as co-head of the Global Relief Fund, a Chicago-based foundation that has been providing aid to mostly Muslim countries overseas. The government now claims -- so far with no supporting evidence -- that the fund is aiding terrorists. Curiously, however, although Global Relief has had its assets frozen for nine months, neither the fund nor any of its officers, including Haddad, has been charged with any crime. The fund has not been listed on the government's list of so-called Specially Designated Terrorist Organizations. Nor has the government filed any other charges against Haddad.

Earlier this month, in a dramatic ruling, a federal district court judge in Detroit declared the government's secret hearing of Haddad's case improper and ordered a new, open hearing before a different immigration judge. That court also ordered a public hearing on granting bail to Haddad, who has been supported by a petition filed by 5,000 Ann Arbor residents and an Ann Arbor City Council resolution calling for his release.

That court order, appealed by the government, was upheld by the 6th Circuit Court of Appeals earlier this month. "Democracies die behind closed doors," Senior Judge Damon Keith wrote for the three-judge appellate panel. "When the government begins closing doors, it selectively controls information rightfully belonging to the people. Selective information is misinformation."

Haddad remains in solitary, though the INS announced Wednesday that it will set a date for a bond hearing by next week.

Meanwhile, however, a broader First Amendment case filed by the North Jersey Media Group, owner of the Bergen (N.J.) Record and Herald News newspapers, is facing a tougher course in the Philadelphia-based 3rd Circuit appeals court. A federal judge in Newark last month threw out the secrecy order, saying that the government should have to make the case for closing immigration hearings on a case-by-case basis. The judge's order, which applied nationwide, was immediately appealed by the government.

In a brief presented last Tuesday before a three-judge appellate panel in Philadelphia, federal attorneys argued that unless there is blanket secrecy for cases deemed related to terrorism, the government's ability to attract informants will be jeopardized. "If we can only tell an informant that we will try to get a secrecy order for their testimony," said one Justice Department source, "many of them will be afraid to come forward at all."

But Janon Fisher, a reporter for the Passaic-based North Jersey Herald News, says that prison interviews with a number of allegedly "terrorist-linked" immigrants have turned up no obvious terrorists. "We haven't found anybody who appears to be a security risk," Fisher says. "The government has never given us, on or off the record, any evidence that might justify the secrecy of deportation hearings on national security grounds."

Fisher says his paper and its sister publication, the Record, sued the government "because in our readership area, we have a large Muslim population. For them, it's a personal issue, not an abstract one. Anyway, it's an important government access issue: How do you know what the government is doing or if it's justified?"

At the hearing last week in Philadelphia, at least two of the three appellate judges seemed, in their questions, to be leaning toward support for the government's position. In an unusual criticism of a sister court, Appellate Judge Morton Greenberg criticized the opinion of the 6th Circuit Court of Appeals and its claim that closed doors are a threat to democracy.

Nonsense, said Judge Greenberg. "This democracy was created right around the corner, behind closed doors," he said.

Of course, there is a difference. What happened more than two centuries ago in Philadelphia's Independence Hall, a block away from the modern Federal Courthouse, was a constitutional convention, where many people of varying opinions were having lively debates, not a hearing to decide whether to deport someone who had lived and raised a family in this country for over two decades.

At another point in the Philadelphia hearing, Chief Judge Edward R. Becker seemed unconcerned about letting the president and the attorney general have a free hand in deporting immigrants during the war on terror. "Why in a national security context in the war against terror can't a court defer to senior administration officials who face political accountability?" Becker asked American Civil Liberties Union attorney Lee Gelernter, who was arguing for North Jersey Media Group. "Why is the sky falling in this context to permit closure in this narrow category of cases?"

It is always risky to guess how a judicial panel is likely to rule based upon the questions that the judges ask. Still, many observers are predicting that the 3rd Circuit may issue a ruling that directly contradicts the 6th Circuit. That would assure that the issue of blanket secret deportation hearings will end up in the U.S. Supreme Court.

It is ironic that the issue is being considered at all. Back in 2000, during the presidential election, Congress was considering legislation that would have banned such secrecy. Campaigning hard for the Latino vote, then-Texas governor and Republican presidential candidate George Bush proclaimed that he was opposed to secret immigration hearings.

Most such talk died when the twin towers fell -- but not all.

Rep. John Conyers, D-Mich., has expressed outrage at the secret hearings. Conyers, who is the ranking Democrat on the House Judiciary Committee, and who will chair that committee if the Democrats regain control of the House after November's election, attempted to attend one of Haddad's hearings and was barred from observing.

"Everyone in this country is entitled to a fair trial," Conyers said in an angry statement. "One wonders how many times the [Bush] administration will be defeated in court before it realizes that it must respect the civil rights and civil liberties of all Americans."

In fact, it is not clear that the Bush administration and the Justice Department will lose if the case makes it to the Supreme Court. Some legal experts say the high court has been cautious about guaranteeing a right to press access at trials. In the end, the judicial conclusion may depend heavily on the national mood. "People like access and the political branches pay a price when they try to restrict it," federal attorney Gregory Katsas conceded in his brief before the 3rd Circuit. "We will pay a price if the people disagree."

Salma Al Rashaid has her own perspective on her husband's solitary confinement in a Michigan jail. "We are all immigrants here," she says in a cracking voice, "whether it is people like us who came to America ourselves, or whether our ancestors came 200 or 300 years ago. People should care not because of my husband, but because the U.S. Constitution is dying slowly."