Been there, done Iraq 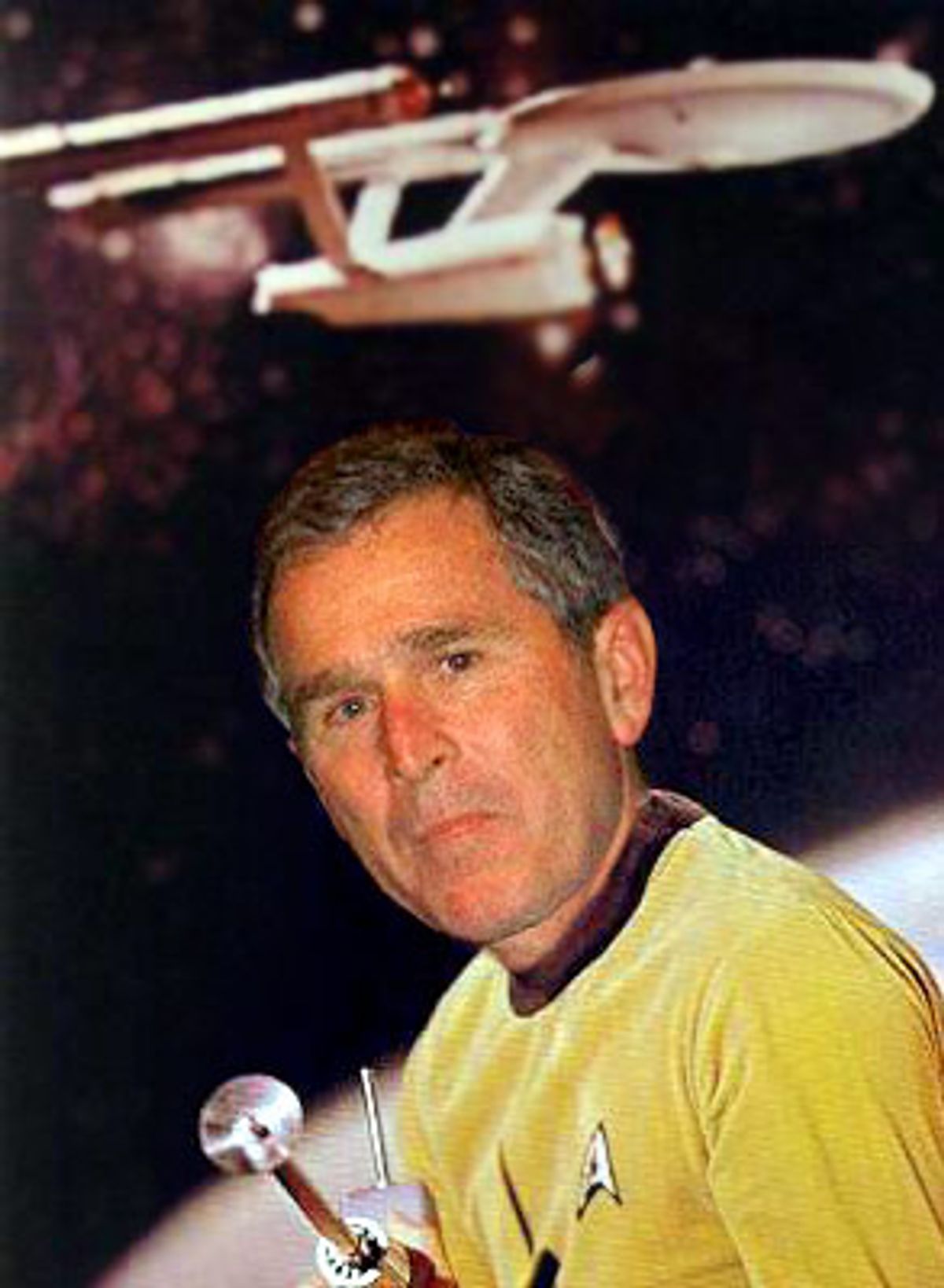 It has been the habit of his adversaries, and most sane people, to suggest that President Bush's preemptive strike idea is a scary, immature fantasy that bears no resemblance to any successful military strategy.

This is not entirely true.

Hollywood historians recently uncovered a cache of "Star Trek" scripts, written but mysteriously never produced, that give precedence -- and lend credence -- to the American president's plans for Iraq.

Classic Star Trek (1965-1968): Kirk, Spock and McCoy beam down to the planet Iraq to hunt terrorists responsible for blowing up a Federation space station, and are promptly captured by rogue warriors led by a menacing guy named Saddam (to be played by Ricardo Montalban).

The trio escapes, but not before Kirk makes it with a helpful local female dressed in traditional desert garb (ripping furiously at her layers of clothing, he gasps, "My ... God ... you ... have ... so ... many ... veils!"). The woman is Saddam's second wife, a glitch that creates a showdown in which Kirk and Saddam punch the snot out of one another in terrain that looks suspiciously like Southern California.

Saddam tries to push Kirk off a cliff but instead misses and stumbles to his own demise. The impressed Iraqis, relieved to be rid of Saddam, sign a treaty with the Federation to make nice, and the show ends with Kirk and McCoy on the Enterprise bridge making fun of Spock for no good reason.

Star Trek: The Next Generation (1987-1994): Hoping to talk instead of fight, Capt. Picard invites an Iraqi negotiating party to the Enterprise for a peace conference -- and to have the terrorists turned over for trial. To make the Iraqis feel comfortable, Picard creates an exact duplicate of ancient Babylon in the holodeck and stays up all night memorizing Sumerian poetry to recite to his guests.

Conference negotiation is tense but productive, but Saddam skulks away from the conference table, sneaks into the engineering section and tries to blow up the ship. He's foiled by security chief Worf and the two beat the snot out of one another on the catwalk high over the warp core reactor.

Worf almost dies when Saddam tries to push him into the burning warp core, but instead Saddam misses and stumbles to his own crispy demise. Impressed with Worf and not wanting to hear Picard recite any more poetry, the Iraqis sign a treaty with the Federation to have many more conferences. The story ends as Picard drinks tea and gazes contemplatively out his cabin window for no good reason.

Star Trek: Deep Space 9 (1993-1999): The Federation chooses Deep Space 9 station as a site for, yes, a peace conference with the Iraqis, complete with a holographic Babylon. Conference negotiations are tense yet productive, but rogue Saddam sneaks aboard and tries to sabotage the proceedings by putting a bomb in Quark's bar.

Sisko foils the plot, creating a showdown in which Sisko and Saddam beat the snot out of one another on the station's promenade deck. Sisko almost dies when Saddam tries to pound him with Sisko's autographed baseball, but instead stumbles and hits his own head, causing his own concussed demise.

The impressed Iraqis join baseball's National League and the story ends with the New Orleans-born Sisko cooking gumbo for his senior officers for no good reason.

Star Trek: Voyager (1995-2001): Capt. Janeway and the lost Voyager crew try to speed up their long journey home by taking a shortcut through the Iraqi planetary system. They run into interdimensional warriors led by Saddam, who is upset that Janeway has ignored their "No Zionist Imperialist Infidels Allowed" signs.

Janeway tries the Picardian method of conferencing, but while the negotiators drink coffee and amble around the holodeck version of Babylon, sneaky Saddam travels back in time and blows the ship up before it reaches the area.

Janeway foils the plot, creating a showdown in which the two beat the snot out of one another in the fourth dimension of the space-time continuum. Janeway almost dies. Saddam stumbles. He dies instead.

Voyager earns safe passage, and the story ends, for no good reason, with Janeway lecturing curvy borg Seven of Nine on what it means to be human.

Enterprise (2001-present): "Hi there, we're from Earth!" says a cheery Capt. Jonathan Archer as the first Enterprise ever built ventures into Iraqi system territory. Despite earnest appeals and several punchups, the Iraqis don't let them through until Trip, the ship's engineer, rigs the ship's communications system to continuously broadcast the show's horrendously awful theme song for thousands of light years around.

The Iraqis relent, an angry Saddam vows revenge, and the show ends with Archer feeding cheese to his dog and telling his crew, "Hey, let's go somewhere else!" For no good reason.

Barry Link is a freelance writer and editor in Vancouver, Canada.