Listen up, jocks: God doesn't care if you score a touchdown. So do your praying in private, not in the end zone. 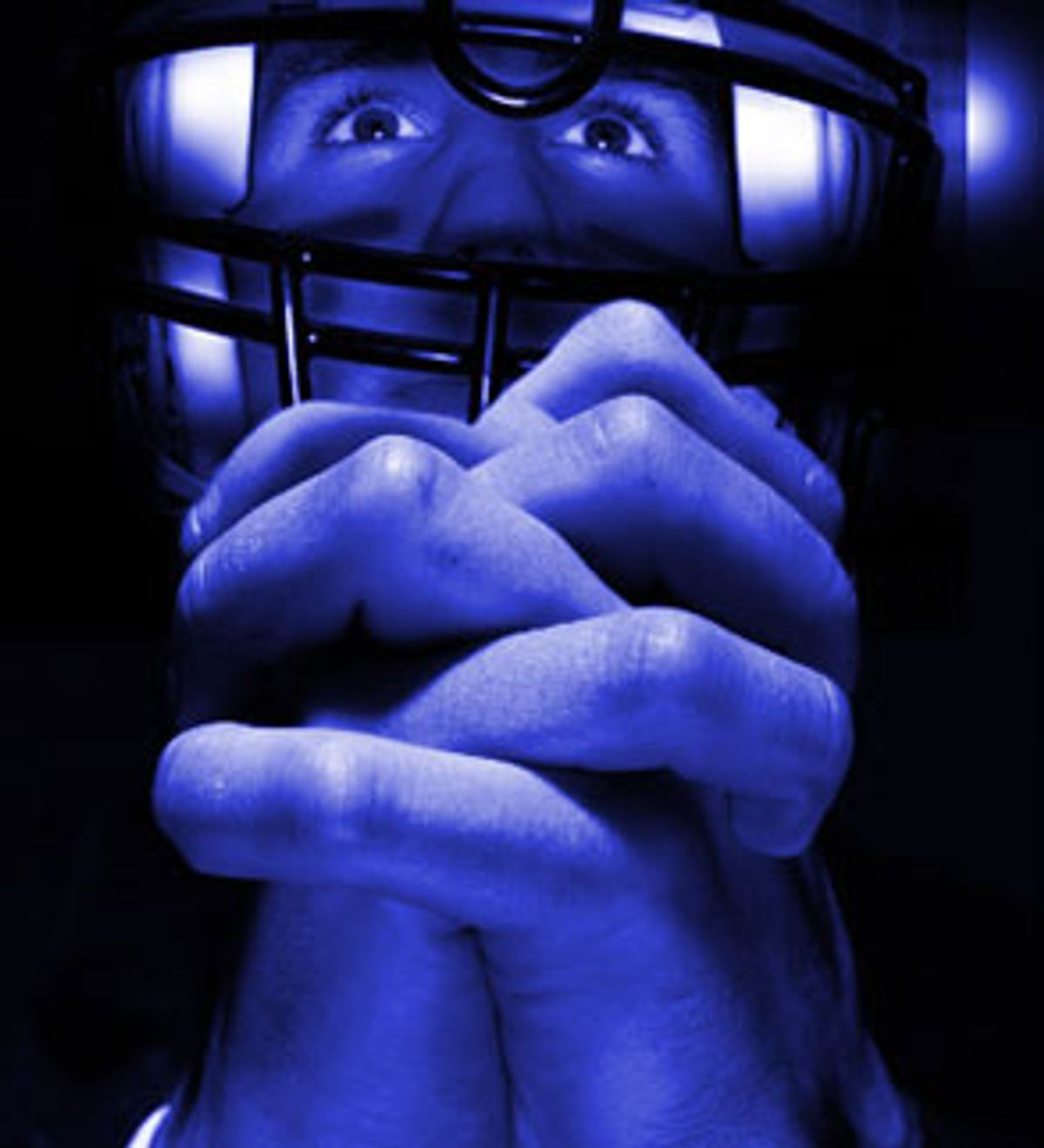 In the second week of the NFL season, Dallas Cowboy quarterback Quincy Carter heaved a 38-yard pass into the end zone. Cowboy receiver Joey Galloway was double-covered, but somehow outfought the defensive players for an amazing touchdown catch. In the middle of the field, in front of 70,000 fans and millions watching on TV, Carter pointed to the heavens in acknowledgment of the Supreme Being's role as touchdown-maker. And in the post-game interview, commenting on his stellar performance, Carter gave "credit to God for giving me the innate ability to perform."

It's kind of funny, but in Week 1 of the NFL season, against the expansion Houston Texans, Carter had the worst performance of his short career. Balls were bouncing at the feet of receivers and there were no touchdown passes, miraculous or not. And in the locker room after the game, God was never mentioned.

In the realm of jock theology, God seems to show himself only to the winners. While many athletes do their own dances or gyrations to gain attention from the fans and TV cameras, many others seek their own spotlight through very public prayer on the field of play. It is a curious trend in the "hey-look-at-me" form of self-promotion that has infected pro sports in recent decades. And it goes beyond making a sign of the cross before taking a few swings at the plate. It's almost as if these jocks are saying: "God thinks I'm special, so you should too."

It is impossible to watch a sporting event these days without some spiritual revival meeting breaking out. There are prayers before the game, prayers of thanksgiving for mighty athletic feats, kneeling in a circle after the game. We have prayers after touchdowns, heaven-pointing after home runs, signs of the cross before free throws. It seems most post-game interviews begin with the "thank the Lord" preamble.

Much of this jock Christianity moves from the simple thanking of the Lord to spiritual showboating. There seems to be a feeling that God is consumed with the outcomes of sporting events, and blesses the believers with victories. Jacksonville Jaguar quarterback Mark Brunell said that the reason his team upset the Denver Broncos in the 1997 playoffs was because "God has blessed this team ... We have a bunch of guys who love the Lord, and he has been with us." This year, the Jags are predicted to stink. Is that because the guys have stopped loving the Lord, or because of the team's salary cap problems?

Athletes often have what might be considered a kindergartner's mentality about religion, treating God as a good-luck charm. "I think that very often athletes seem to have a very simplistic and self-serving view of what God is and does," sportscaster Bob Costas said in an interview with the San Diego Union-Tribune. "It makes no sense that a God who, for all human understanding, can appear indifferent to major pain and suffering on a large scale or the illness of a child, would intercede to help get a first down."

The impression is given that the player's success is fused with God's will, and the God of sports games is a micro-managing deity. But even though the God of jocks pays attention to the most minute detail of the game, he doesn't bother with the losers. "If the player were consistent, he would point to skyward to mark the judgment of God after he got his shot blocked or struck out," says Robert Benne, director of the Roanoke College Center for Religion and Society. "I haven't seen that lately." Or as Philadelphia Daily News writer Jim Nolan succinctly put it in a column: "To fumble is human, to catch the winning TD, divine."

So let's do something about this. In the name of metaphysical neutrality, in the quest to stamp out spiritual fakery, I would implore the commissioners of the sports world to ban prayer on the field of play. No kneeling, no heaven-pointing. The sports leagues already ban taunting. What taunt could be worse than saying to your opponent that your God is more powerful than his?

I am not suggesting this on a whim. I know that sports and prayer have been conjoined for thousands of years. The Mayans had a basketball-type of game 4,000 years ago -- played in the temple compound and officiated by temple priests -- that concluded with the losing captain being ritually sacrificed. (You think those captains weren't praying for the ball to go through the hoop?) White Sox baseball player and evangelist Billy Sunday would preach about the evils of drink before games in the late 19th century. Notre Dame hitched its football team to the legend of "Touchdown Jesus," a mosaic built on a campus building in the 1960s that appears as though the Lord is signaling a touchdown. In the '70s, we started seeing a man on TV in a rainbow wig with his John 3:16 banner.

But now we have athletes that seem to think that prayer might be a good public relations gimmick, done more for the TV cameras than anything else. And it is also almost entirely evangelical Christian in nature, very narrow and exclusive in its focus. Jewish athletes like Shawn Green, the Dodgers' right fielder, have quietly asked for religious holidays off, just as the team's Hall of Fame pitcher, Sandy Koufax, did in an era earlier, but we don't see Jewish athletes draping a tallis over their uniforms. We might see Roman Catholics occasionally making the sign of the cross at the plate, but we don't see them praying the rosary on the bench to help start a rally. Muslim boxers don't kneel and face Mecca after they knock the crap out of someone.

Wary of spiritual showboating, the National Collegiate Athletic Association tried to ban prayer from its sports in 1995, but changed its policy after being sued by the Rev. Jerry Falwell's Liberty University. The new policy is a comical but predictable result of lawyers delving into spiritual matters. "Players may cross themselves without drawing attention to themselves," the NCAA policy states. "It is also permissible for them to kneel momentarily at the conclusion of play, if, in the judgment of the official, the act is spontaneous and not in the nature of a pose."

The NFL has its taunting rule, but it is even more subjective. Individual celebrations are permitted as long as there is no taunting, such as spiking the football in the opponent's face. "Choreographed demonstrations by two or more players" will be reviewed by the league, the rule says. But there is nothing in the rules to prohibit "spiritual spiking."

I asked NFL spokesman Greg Aiello if the league would consider legislating against end-zone prayer. He laughed and said it is the individual's right to express himself. I then asked him how tolerant the league would be of other religious demonstrations. For example, would the league permit a Santerian to sacrifice a chicken after a touchdown?

"I think that would be unnecessary roughness," Aiello joked. "Fifteen-yard penalty."

"What about snake handlers?" I asked.

"Don't the Oakland Raiders' fans already do that?" he answered.

OK, I was being a smartass, and so was Aiello. But in the larger sense, the question of which religion a league endorses is a serious one. Sports is the American idiom. Given our melting-pot culture, sports is the "civil surrogate" for a common American religion, as the late baseball commissioner A. Bartlett Giamatti once observed. After the 9/11 tragedy, Christians and Jews and Hindus and Moslems all moved into our sports cathedrals to sing "God Bless America."

I realize the American Civil Liberties Union and the Christian Coalition would be joined together on any prayer ban, and would probably win on the grounds of freedom of expression. But couldn't the teams and leagues put some brakes on all the posturing prayer, maybe moving it to the sideline? Couldn't the networks quit showing it and dwelling on it? And more importantly, couldn't some of the leading clerics in this country explain to the athletes that God does not really care whether or not they get a first down?

It is curious that athletes feel the need to pray more so than, say, accountants. I know of no accountants who point to the heavens after they balance their ledgers. I do not kneel after writing a good sentence.

Maybe Brunell and Carter and the other heaven-pointers and end-zone kneelers should get some advice from the same Lord they are aligning themselves with on the field of play. In Matthew 6:5-6, Jesus explains how to pray: "And when you pray, do not imitate the hypocrites; they love to say their prayers standing up in the synagogues and at the street corners for people to see them. In truth, I tell you, they have had their reward. But when you pray, go to your private room, shut yourself in, and pray so to your Father who is in that secret place, and your Father who sees all that is done in secret will reward you."

So please, all of you jocks who feel the need to pray in front of 70,000 people and millions more on TV, do as the scripture tells you. Pray in private. We all know how God has blessed you and how wonderful you are. But God does not care if you score a touchdown. He does not care if you sack the quarterback. And maybe, just maybe, this God thinks all of us are special, not just our Sunday gladiators.

Dan McGraw is a writer living in Fort Worth, Texas. His memoir, "First and Last Seasons: A Father, A Son, and Sunday Afternoon Football" was published in 2000 by Doubleday.