Madison Avenue and your brain

New advances in neuroscience are explaining why people just do it, exactly as they're told to, when that commercial comes on. 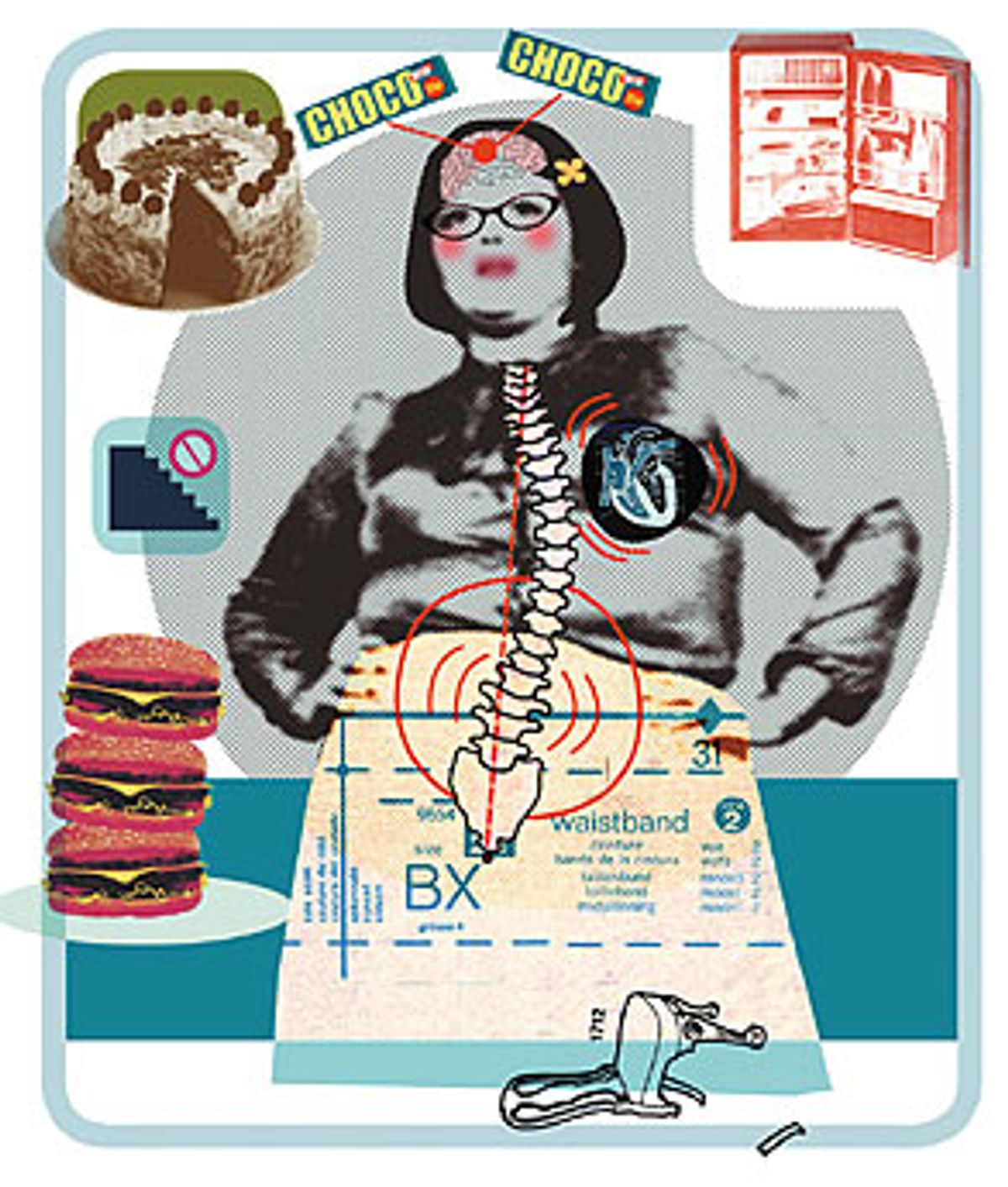 Pity the poor overstuffed couch potato, little suspecting that his latest turn of appetite is not the true call of hunger but a hijacking of his brain's circuitry from afar. While he waits for his favorite rerun to air, a fast-food commercial shows him images of moist, steaming meat; crisp, glistening vegetables; and taut strands of melted cheese. A cascade of neurotransmitters is set off in an ancient part of his brain, and his food cravings reawaken.

Several decades into the era of consumer capitalism, the whiz kids on Madison Avenue have learned fairly well how to attach psychic puppet strings to our minds, but they have never really known why (or often whether) their tricks worked. Enter the age of neuroscience. As investigators plumb ever deeper into the strange dynamics of the brain, they are shedding new light on many domains of human behavior, including mental illness, violence, cooperation, addiction, eating and even aesthetics.

Stock assertions like "People buy designer clothes because it makes them happy" or "Americans are overweight because they're weak-willed" are not real explanations. There are deeper reasons why comely pop stars make us desire a certain brand of fill-in-the-blank, or why billboards coax us off the expressway and into a drive-through.

"The mainstream economic theory behind advertising is just horrible," says Caltech behavioral economist Colin Camerer. "For some reason economists are reluctant to accept the idea that advertising makes you want to buy something you didn't necessarily want before ... Some of this new evidence from neuroscience could be very powerful in overturning that kind of silly, narrow conception."

Take the case of the hunger-struck couch potato. A recent brain-imaging study sheds light on the mechanism that makes the mere presence of food alluring. When people were allowed to see and smell their favorite chow, a deep-lying brain structure called the dorsal striatum was activated and the subjects reported feeling hungrier. Notably, this neural circuit was different from the pleasure pathways that are tickled when people actually get to eat.

"The dorsal striatum is being linked to addiction formation and to things that you learn and do almost uncontrollably," says Nora Volkow, the neuroscientist at the Brookhaven National Laboratory who led the study. "When it's active, it creates a very strong drive to consume food. This is a reason why [fast food] advertisements are so compelling, and why we are having an epidemic of obesity in this country."

The job of the dorsal striatum is to enhance the desirability of food automatically, says Volkow. Though it sits right next door to one of the brain's most important pleasure centers, it is not itself a generator of warm, fuzzy feelings. Indeed, being hungry in the presence of forbidden food is distinctly unpleasurable.

What this and similar research implies is that, contrary to how it may feel, the reward of eating is not the sole, perhaps not even the primary, thing motivating us to stuff our faces. The dorsal striatum draws us to food (and other objects of our addiction) in the first place, says Volkow, even when we are not hungry.

"This system was once very important for survival," she says. "It was important to want food whenever you could get it, because you never knew when it was going to be around.

"But now with refrigerators and 7-Elevens all over the place it doesn't serve any purpose anymore. Individuals are being constantly exposed to food stimulus. In an almost reflexive way, people's brains are responding to these signals, generating a biochemical change and a motivation to eat."

The dorsal striatum is not the only avenue into a consumer's brain. A structure right beneath it, called the nucleus accumbens, is another. Like the dorsal striatum, it is rich in the neurotransmitter dopamine, a brain chemical associated with feelings of satisfaction and reward. But unlike its upstairs partner, the nucleus accumbens is a bona fide pleasure center. It is activated by food, sex, drugs, money, victory, just about anything that feels rewarding. It helps animals to form pleasure-related mental associations and to stay motivated in the pursuit and repetition of positive experience.

The nucleus accumbens also turns out to be crucial to our taste for novelty -- which, as any marketer will avow, is a tried-and-true road to healthy (if not always healthful) sales.

"It is very deeply ingrained for us to associate potential reward with things that are new and unexpected," says Gregory Berns, an Emory University neuroscientist who studies how the brain responds to novelty. "New things grab the brain's attention by tapping directly into these reward pathways."

New information elicits activity in a neighborhood of brain structures often referred to as the limbic system, Berns says, which includes the nucleus accumbens and the striatum. Tying perceptions of novelty into the reward system makes good evolutionary sense, he explains, as it's an excellent way to keep animals attuned to changes in their environment. Nowadays, it probably also helps to make us indefatigable consumers.

"Are marketers tapping into this system unknowingly? I'd venture to say yes," says Berns. "They have this notion that they need to keep creating new things, new products, new versions of products.

"Why do people want to get new cars when their old ones work fine? It isn't just 'because it makes them happy.' A deeper explanation is that the brain is constantly seeking out new information and gets rewarded through these specific neural circuits when it finds it."

It is not only food and novelty that give an extra-hard tug on the brain's attentional resources. Just about anything a person finds especially pleasant to observe is reaching in and twisting the dopamine spigot.

One recent brain-imaging study found that the nuclei accumbentes (to use the proper plural) of young heterosexual males were activated by beautiful female faces. Plain female faces and male faces that the subjects rated as extremely good-looking had no effect. The experiment aimed to control for gender and for "pure" aesthetic judgment, and was left, it would seem, with that most marketable of blatancies, sex appeal.

Neuroscientists have made good headway in recent years figuring out why emotionally charged experiences get turned into stronger, more vivid memories than do humdrum and routine events. The key player is another limbic system structure called the amygdala. When revved up by a potent emotion -- which a good thrumming in the nucleus accumbens will generate -- the amygdala stamps the engendering event firmly into memory.

"Memories stored by the amygdala are extremely powerful," says Volkow, "because from then on, whenever you re-encounter that stimulus you will immediately associate it with the pleasure [or aversion] you first experienced."

Presumably this is one of the reasons it pays to place shapely young women on-screen mugging next to anything from flashy gizmos to fizzy sugar water. The pairing is arbitrary, but it engages a set of brain mechanisms that evolved originally to select mates, learn from serendipity, and remember intense experiences on which future survival might hinge.

Just as early mariners were clueless about the Coriolis forces that drove the trade winds, so have advertisers honed their craft without understanding the neural underpinnings of the desires and perceptions on which they seek to capitalize. And just as understanding the physics of trade winds had little practical effect on maritime navigation, so, too, will the march of cognitive science be unlikely to spin off a scientific field of neuroadvertising.

"For about 50 years there have been people who looked at physiological or neurological responses to marketing stimuli," says David Stewart, a marketing expert at the University of Southern California. "[But] they have not had much real impact on the way advertising is created or assessed. The reality is that it's almost always easier to just directly ask people what they liked about an ad," or follow their behavior afterward to gauge its effectiveness.

From this point of view, neuroscience will probably not soon be adding any tools to the marketing industry's bag of tricks. But as these examples show, it will at least help explain how the current tools work. Indeed, as cognitive science emerges from its own Bronze Age, it is holding up the hope (or for some onlookers, the horror) of a new set of concepts for charting the lay of human nature.

How deep these new ideas will penetrate into civic policy and individual self-conception (as, for example, the psychoanalytic revolution did a century ago) will be interesting to watch. It will be interesting to see, for instance, whether the activist-planned lawsuits to hold the fast-food industry accountable for supersizing America's collective waistline (and medical bill) will prevail. While neuroscience provides a plausible foundation for the case that the industry's marketing practices will inevitably net consumers en masse into excess consumption, society may never be ready to let individuals off the hook for taking the bait. Or, as it did in the suits against Big Tobacco -- where the science of addiction was a central issue -- it might.

Each side in the debate should prepare to be surprised over the next few decades. The lines between manipulation, free choice and manufactured vs. true desire could turn out to lie quite differently from how they feel.

Meanwhile, other areas of marketing and consumerism will come into better focus as well. Scientists who study music and memory will figure out why melodies and jingles lodge so firmly in the mind's ear. Researchers who study social cognition will continue to zero in on the circuitry that drives us, broadly speaking, to keep up with the Joneses. And psychologists who study people's sense of happiness may some day be able to approach directly the central, yet seldom stated, question of consumer capitalism: Do we really increase our long-term happiness by buying as voraciously as we do? Or does that sense, like many other aspects of our intuitive self-knowledge, turn out to be steeped in illusion?

Matthew Blakeslee is a freelance science writer in Los Angeles.