This week's new TV sitcoms offer two dismal duds -- and a sly, bittersweet comedy about a dissipated writer who hits on his own daughter. 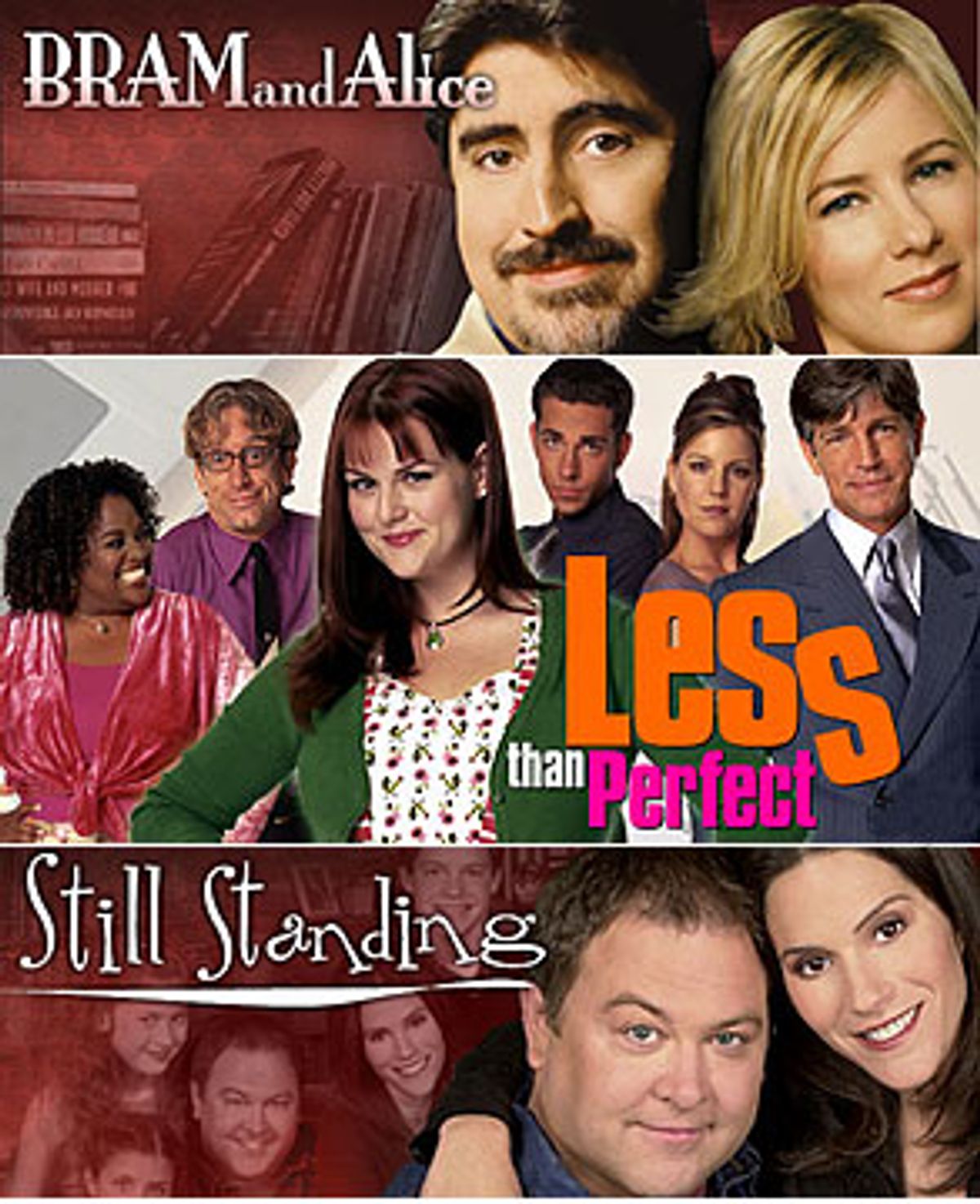 This week, a blue-collar marriage comedy, a workplace comedy and a single-girl-in-the-city comedy walk into a bar ... ABC's "Less Than Perfect" lives up to its title and "Still Standing" sounds like wishful thinking on CBS's part. Worth a look is "Bram and Alice," also on CBS, a wry comedy by the executive producers of "Frasier" that lampoons both writers and the literary aspirations of those who stalk them. "Bram and Alice" is witty and fast-paced, and even makes the New York sitcom setting seem fresh -- or at least justified.

Continuing the network tradition of taking something and making it similar, "Still Standing" reprises "The King of Queens," only with kids, only in Chicago.

Mark Addy ("The Full Monty") plays Bill Miller, a lazy, lowbrow, overweight toilet salesman married to Judy (Jami Gertz), a slender nurse who doesn't appear to have any regrets. Addy, who is English, can barely manage an American accent, let alone a Chicagoan honk. (This is not even attempted.) Gertz is convincing as a working-class mom -- if you are easily convinced. The casting would make perfect sense if Chicago weren't, you know, an overweight, working-class comedian factory -- and if this were an alternate universe.

In the first episode, a visit from Judy's sister and her psychologist boyfriend leads to a disastrous experiment in marital honesty. Bill unleashes his inner critic, and soon learns that it's much better to lie. When his straitlaced son (you know he's straitlaced because he's partial to golf shirts and sweater vests) asks Dad how to get a girl to like him, Bill offers some advice: Unless you want to be part of the "never-touch-a-booby tribe," you have to be a bad boy. When the kid gets in trouble, Bill winds up in the principal's office, just like in the old days.

Even keeping in mind that any depictions of location, socioeconomic status or even personality are purely decorative on most sitcoms these days, it's impossible to watch a show like "Still Standing" and not wonder how the clichés are weathering the overwork. You half expect them to quit halfway through and picket.

It's too bad, because Gertz and Addy are likable and funny, and they seem clenched and cramped wedged inside such a constricting mold. But CBS is going, apparently, on the principle that a comedy lineup should be as neat and homogeneous as a stack of Gap khakis. The network has scheduled "Still Standing" between "Everybody Loves Raymond" and "King of Queens" and "Yes, Dear," making it the Size L amid "Raymond," "Yes, Dear" and "Queens'" S, M and XL. The toilet humor stretches out before us like an endless vista.

Claude (Sara Rue), a chubby fourth-floor (read: lowlife) corporate "floater," is suddenly catapulted to the top of the amanuensis business when she is assigned to assist a pompous anchorman, Will (Eric Roberts), at the TV station where she works. This promotion does not sit well with Kipp (Zachary Levi ) or Lydia (Andrea Parker), who regard the 22nd floor as a safe zone for all that is slick, smart and skinny. It's a classic fish-out-of-water comedy, except that the fish swam upstairs to swim with sharks.

The title of the show refers not to Claude's secretarial skills, which are superb (read: wifely), but to her weight, which is higher than her colleagues' by about 20 pounds (read: morbidly obese, in sitcomese). This makes for a delightful half-hour of fat jokes, most of which Claude makes at her own expense.

More alleged comedy springs from the idea that Claude would be -- and was -- more comfortable around her "own people"; namely Ramona (Sherri Shepherd) and Owen (Andy Dick), her "less than elite" fourth-floor buddies. As a sitcom, it's a total loss. As a study in network attitudes toward "average people" -- its own star included -- it's fascinating. And it's not just that practically every one of Rue's jokes is a monument to self-loathing. You know a show doesn't hold you in very high regard when it casts Andy Dick as one of your bestest buddies.

A new sitcom from the producers of "Frasier," "Bram and Alice" caused a minor teacup squall last spring when it was described as a comedy in which a father hits on his grown daughter. Of course, the father in question doesn't know that she's his daughter, and he hits on every young woman that walks through his door. "Bram and Alice" is a getting-to-know-you comedy, not a Kathryn Harrison memoir.

Alfred Molina plays Bram Shepherd, a Pulitzer-winning, one-hit-wonder novelist with a huge following and not much else. He may be idolized by every starry-eyed youngster who comes to New York to "try and make it as a writer." One of the nicest things about "Bram and Alice" is that it recognizes a line like this as the gemlike joke it is, and doesn't bother to dress it up in more sitcom-y hilarity. Literary cult status doesn't pay the dry cleaning bills, however, let alone the rent.

In the first episode, Bram mistakes Alice O'Connor (Traylor Howard), the daughter he barely knew he had, for just another groupie. (Another one of his fans has left his apartment only minutes earlier, leaving behind a manuscript, which Bram has tossed in the fire.) Soon, he and Alice realize that A) she is his daughter and B) he's been trying to seduce her, much to their mutual horror. Meanwhile, the woman with the manuscript returns bearing bagels, and all hell breaks loose. Among other things: What's her story doing in the fire?

"I was jealous! It's brilliant!"

Molina's character is delightfully rakish and Howard's is suitably appalled. Roger Bart plays Bram's reluctant assistant, Paul Newman, a young literary snob hired by the publishing house to try to get the prodigal author to deliver on his contract. Michael Rispoli plays Michael, a lapsed priest-turned-bartender who works in the saloon downstairs. Katie Finerman plays Katie, a kept woman with a Japanese boyfriend.

Somehow, it all fits together when Alice mistakes Bram's offer of a pair of boots for an invitation to move in with him. Naturally, she'll be paying rent, and giving the writing another chance -- a slyly Sartrean arrangement that's sure to drive all involved insane.

It's not every day that a sitcom lampoons the vampirish relationship between a famous author and a dreamy wannabe. When Alice tells Katie about her terrible first meeting with Bram, Katie knows just what to do: "A writer? From Vermont? Michael, you better make that two!"